Eric Cheng of DJI recently took his Phantom 2 to Iceland, hoping to get close enough to fly over the erupting Bardabunga volcano. The footage he brought back is spectacular.

As director of aerial imaging for drone maker DJI, Eric has piloted his drone in some incredible locations, and covered some unique events (he even made a short film of Apple Co-Founder Steve Wozniak racing a Segway scooter on a soccer field). So, when the Icelandic Bardarbunga volcano started exploding in a steady stream of fiery lava, Eric had a bold idea. Why not capture some dramatic footage of this natural phenomenon…from the air! While others were chartering helicopters, Eric wanted to capture a slightly different view. He wanted to fly as close to the lava as possible. With no danger to humans, flying a drone over the eruption was the safer (and more unique) option.

Eric talks about the technical details of pulling off an amazing shoot over on his aerial website, Skypixel.  As a very amateur drone pilot, I can only imagine the excitement (and stress) that flying a drone over an erupting volcano can invoke. I asked Eric how he felt flying his prized quadcopter over a raging inferno.

Fstoppers: Did you ever feel anxious, nervous, or worried that you may experience a crash and lose your footage?

Not really. All of these sorts of expeditions start with calculating risk. There is an inherent chance of loss of equipment in every shooting scenario, and this just happens to be one of the scenarios with high risk. Also, equipment loss isn’t the only kind of possible loss. In the past, I have spent hard-earned money to go on expeditions that target the capture of very specific wildlife behavior. It’s true that the chances are maximized because we research and prepare for such trips, but the absolute chances of success are often still low. Is losing $5K and 2 weeks of time because you didn’t get the shot worse than losing $5K of actual equipment? Not really (but somehow, it feels worse to lose gear because it’s a physical thing, and also, losing physical things pollutes the environment unless they are retrieved). Some folks have pointed out that I work for DJI and therefore, get equipment for free. I also happen to be sponsored by GoPro. Both of these things are true, but I don’t think I’d be doing anything differently if that wasn’t the case.

FS : For us amateur drone pilots, what advice can you give us when flying in such a pressure filled situation?

There is nothing you can do once you arrive on location—it’s too late. The best you can do is to make sure you are prepared before you arrive. If you aren’t out there practicing constantly, even if it means shooting nothing at your local park, the next guy who is more prepared than you are has an advantage. You shouldn’t have to think about aerial camera movements.
To get these shots, you really need the combination of opportunity, preparation, skill and luck. In this particular instance, it took a great deal of all three of those elements, starting with the amazing and rarified access I got because I knew the right people. Frankly, I’m amazed that it all worked out because we were really rushed to hit a specific 24-hour time window, and there were so many opportunities for failure.

I happen to be going back to Iceland in December, but this time, with my drone. If the volcano is still erupting, I may just see if I can find someone who can get me close enough for a quick flight. Wish me luck!

If you are just looking for 90 seconds of incredible footage without the story, Eric and DJI made a video just for you!

Eric also has some incredible Behind The Scenes photos of the DJI Phantom 2 at work, as well as some aerial stills from above the stirring lava. 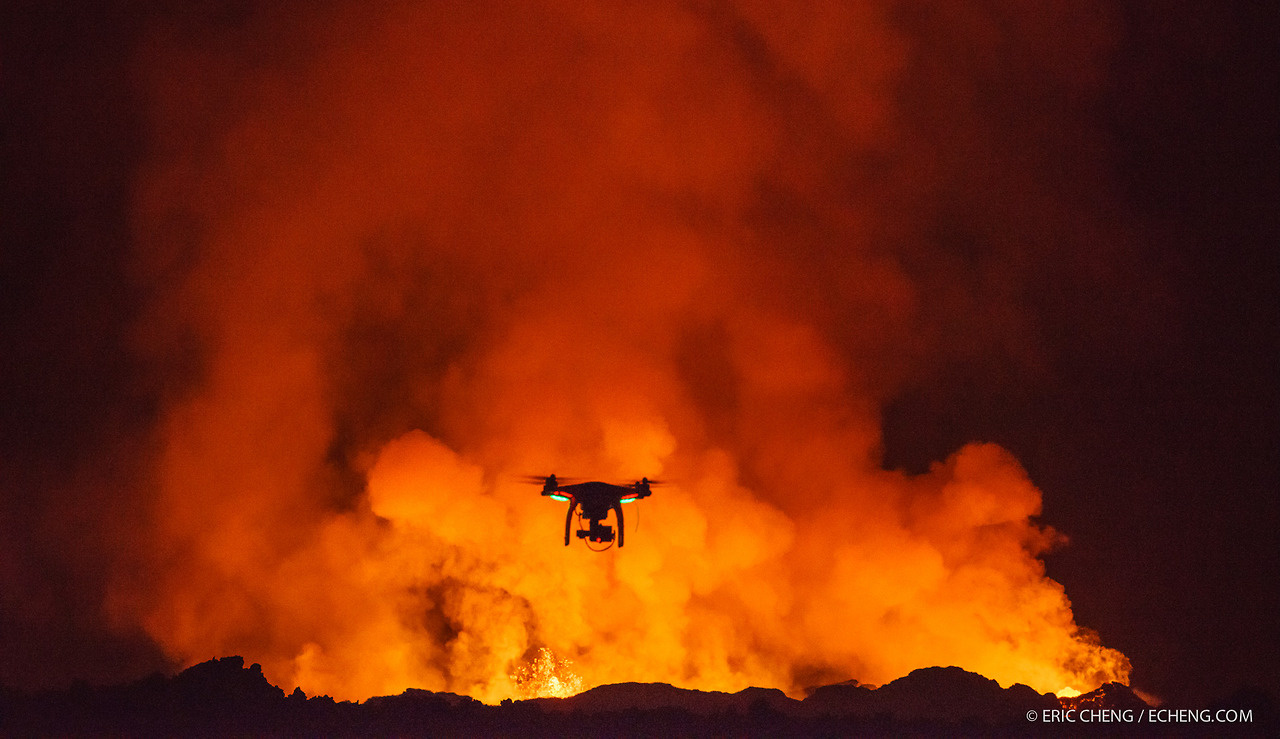 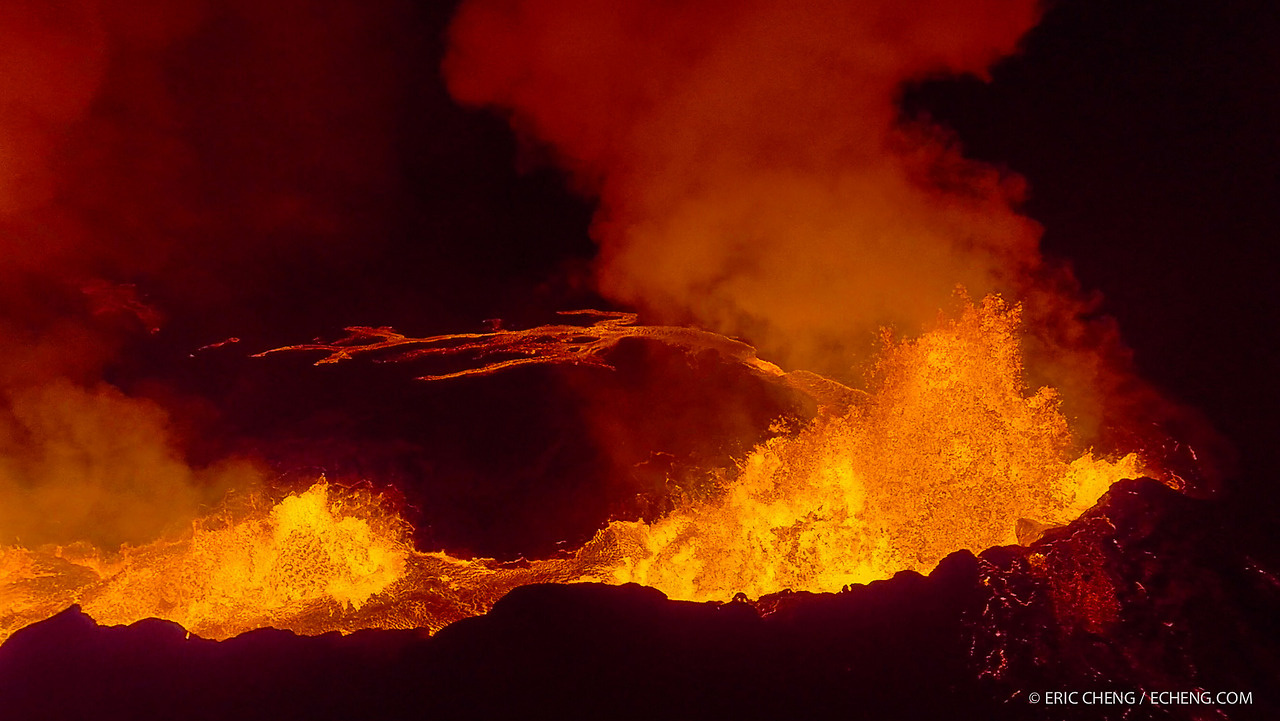 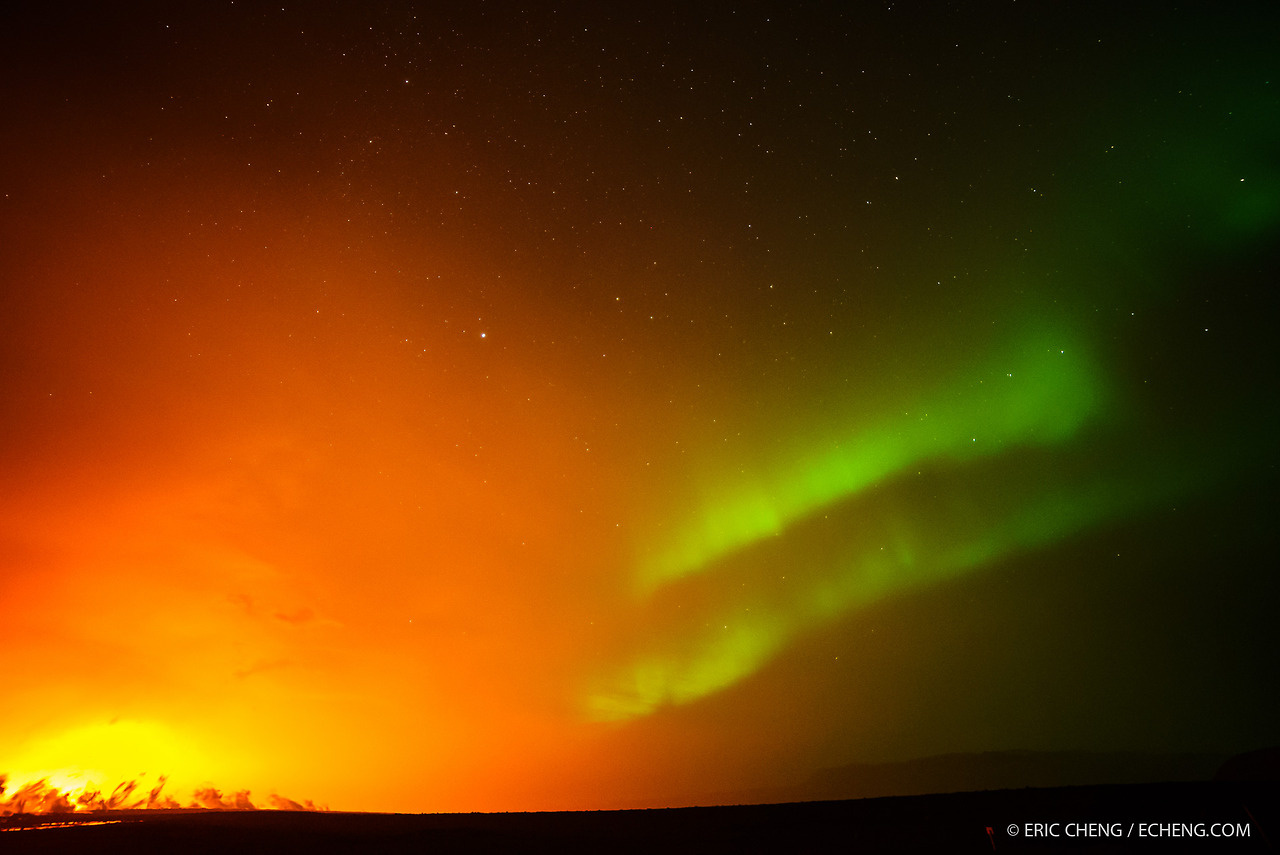 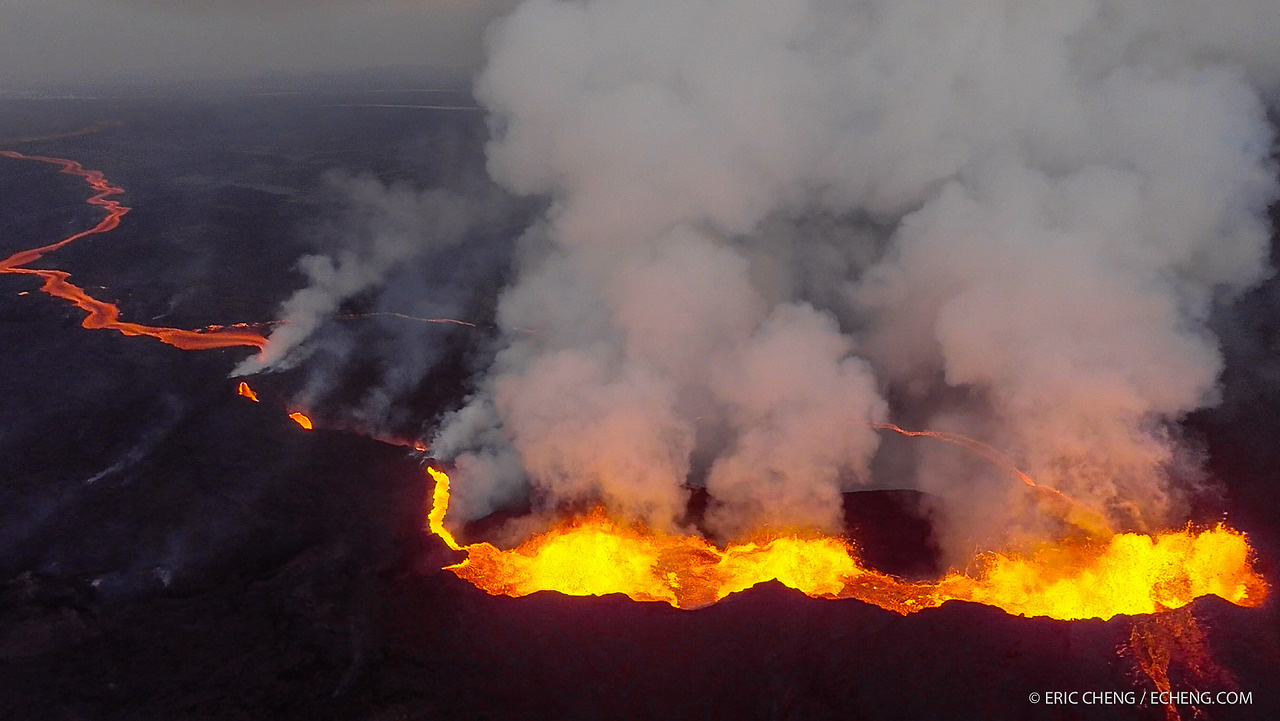 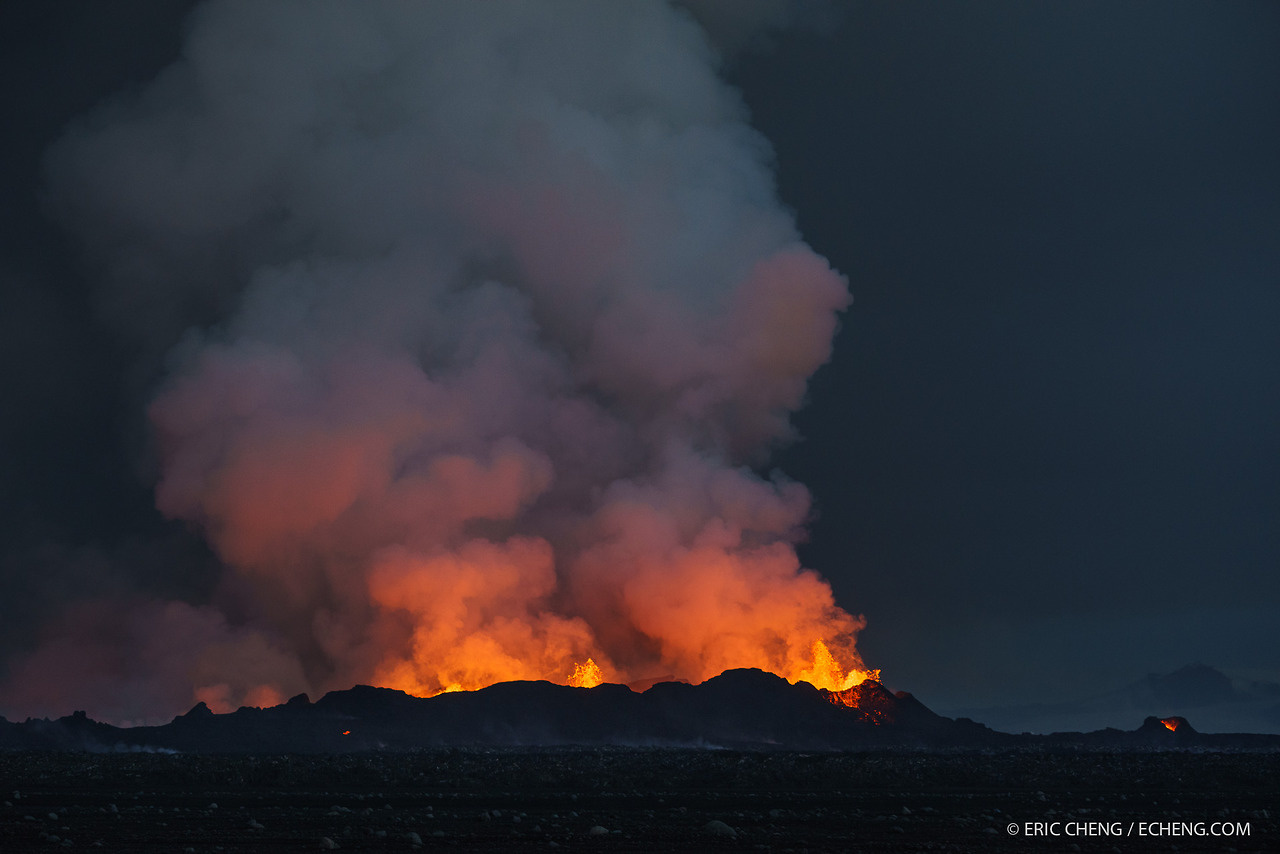 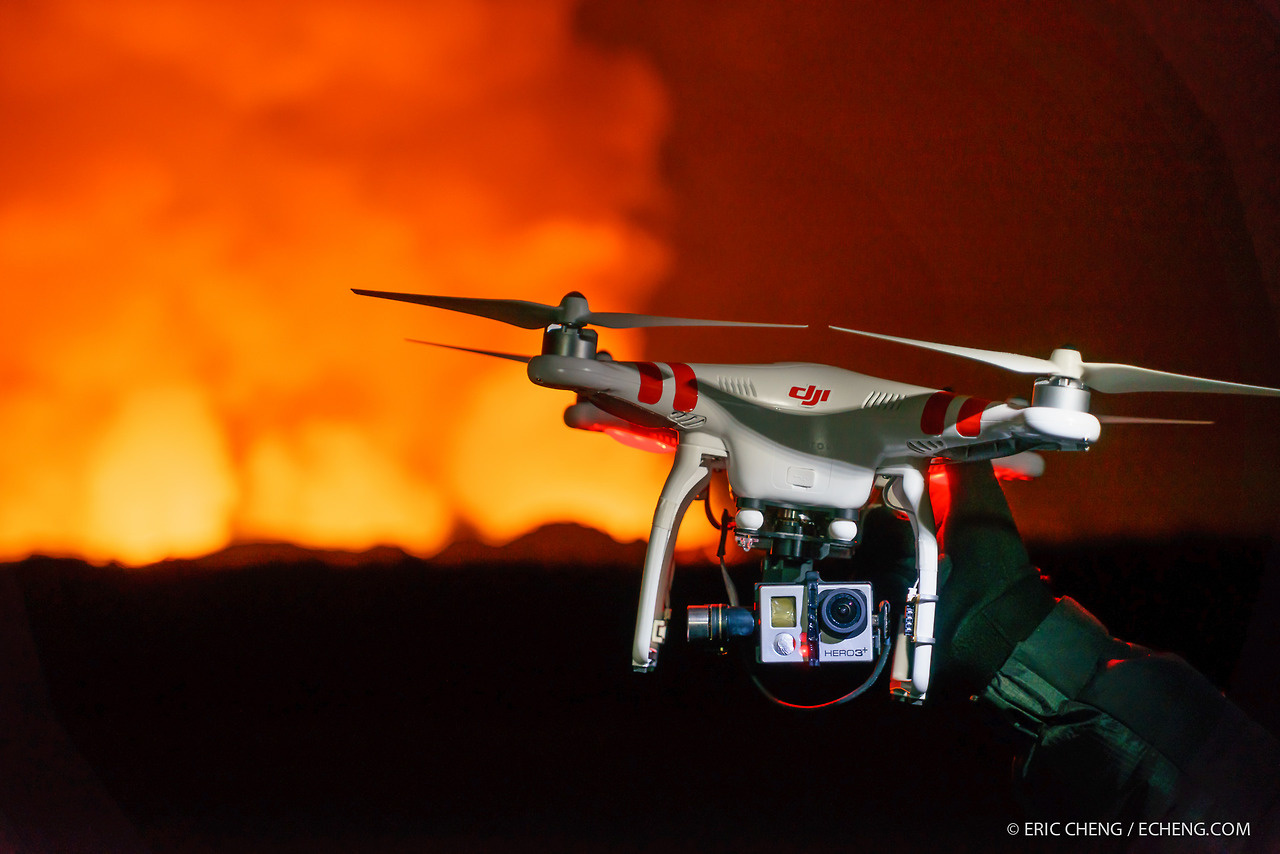 All Images Coywrite Eric Cheng and used with permission.

The still of the drone over the volcano looks like something from Space Invaders.

If I was piloting this drone I would have gotten some incredible footage of the drone flying into the lava.

Ok, am I the only one who'd replace the GoPro with a small tray of graham crackers, chocolate, and marshmallows? They've gotta taste in-credible when heated by a volcano!

HA! My girlfriend would be right there with you.

Eric Cheng must be volcanologist, police officer, rescue team member or news reporter from a major newspaper, because everybody else can not visit the area. Icelandic photographers are banned to enter the area but few "elite" people have been given access to the eruption. There have been a lot of debate among icelandic photographers that want to document this amazing event, but the Icelandic police have sent helicopters with special units to arrest those who try to get close to the volcano and they will get 3-4000$ in fines for trespassing. Only way for the normal Iceland to see the volcano up close is to buy a helicopter ride that cost around 2000$ .

But I am happy that Eric has been let to the volcano, because those shots he has taken with DJI phantom are amazing, and a good documentation of the eruption.