A True Bird’s Eye Perspective - The Work Of Photographer And Pilot, Alex MacLean

I still remember how amazing it felt when I was young and lucky enough to be flying somewhere and ended up with a window seat. Those few moments during take off and landing provide an exhilarating and rare view of our environment. What would it be like if we had the ability to fly ourselves in our own plane and had the ability to get unhindered shots of wherever we happened to be flying? Welcome to the beautiful bird’s eye view of pilot and aerial photographer Alex Maclean.

Alex Maclean is one of the world’s most preeminent aerial photographers. For almost 40 years, he has been flying himself over much of the United States and parts of Europe. Originally setting up shop as an aerial architectural and landscape design photographer for university research, Alex has established a dedicated and extensive roster of clients over the years.

As a graduate of Harvard’s Graduate School of Design, with a Masters in Architecture, Maclean possess a keen eye for color, composition and framing which is so evident in his work. 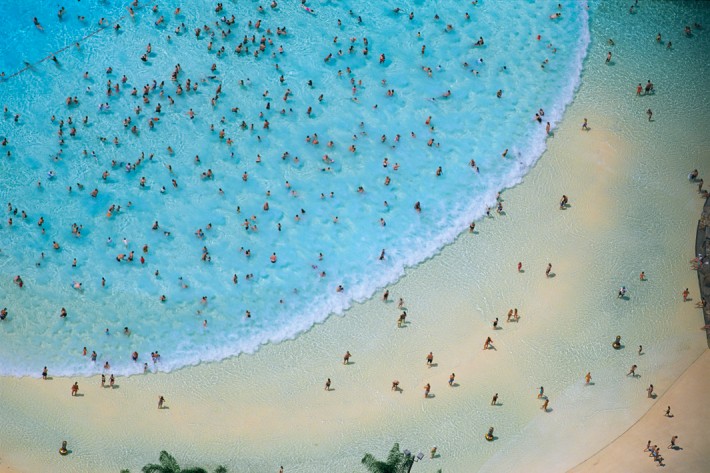 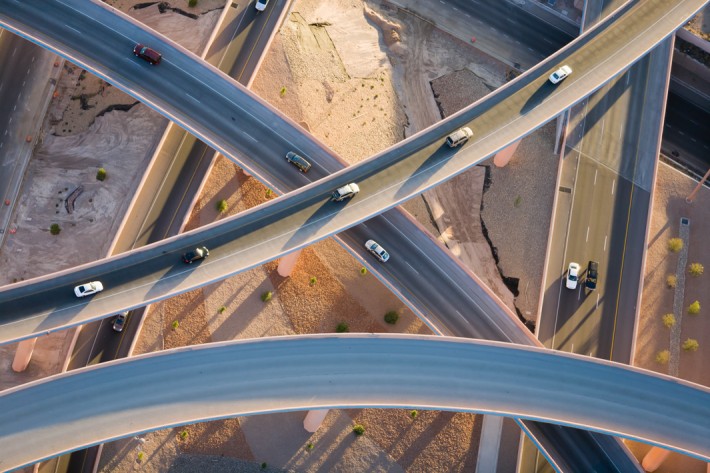 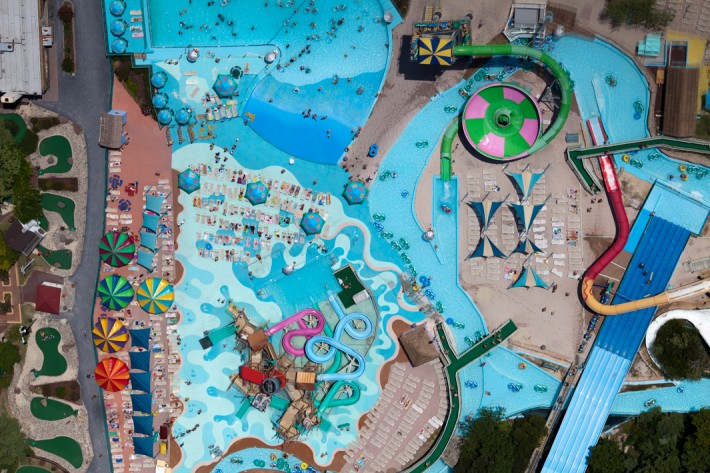 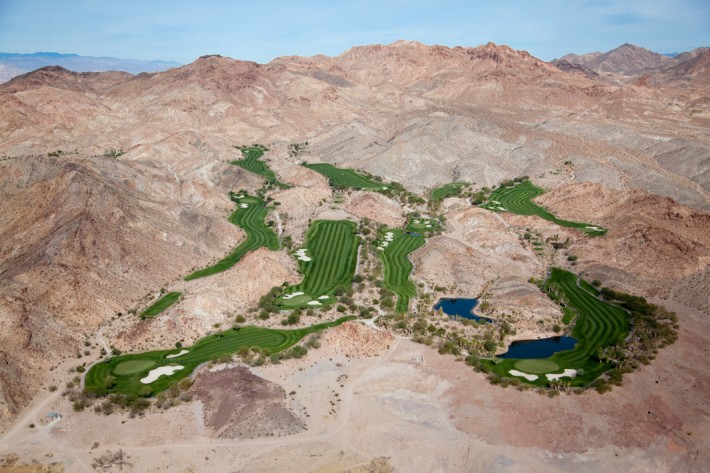 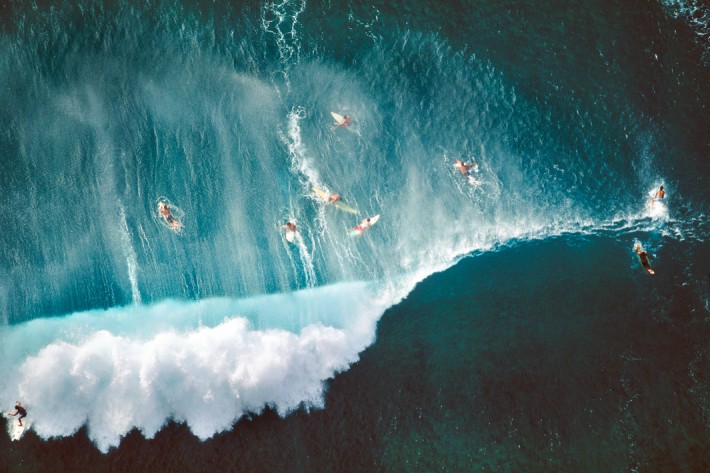 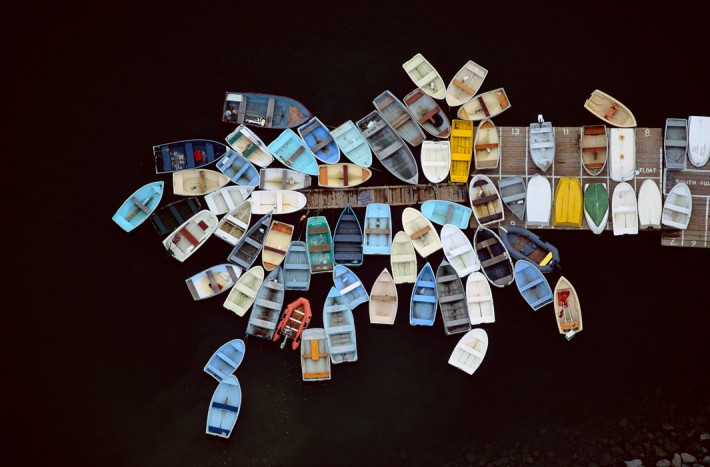 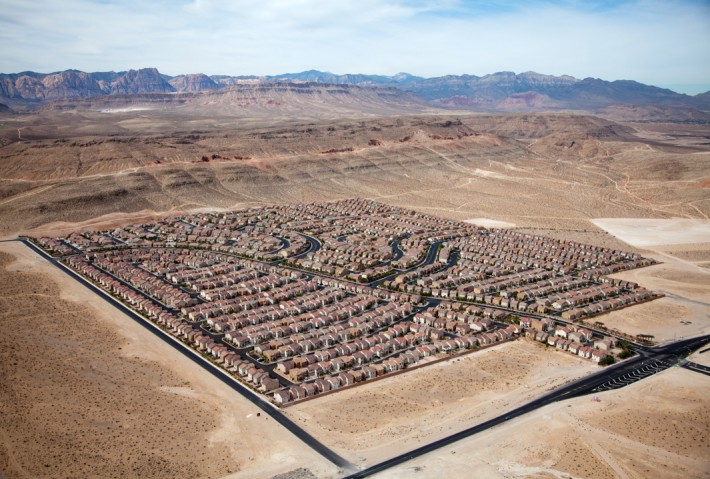 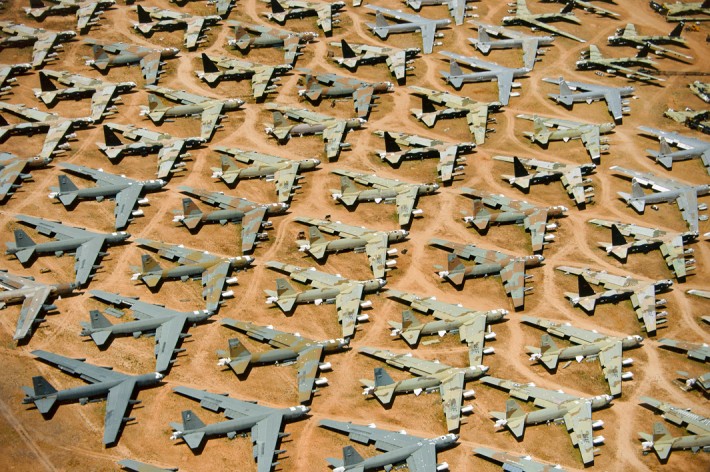 Maclean outlines his ability to observe the world from above, both in terms of understanding the beauty of the natural world, but also how the patterns, shapes and colors of buildings and other man made structures juxtapose against the natural environment, which is the really the essence of what I find most fascinating about his work:

“You see places where things are moving through the landscape making paths. Then you see other things that are holding things in place. Rivers and streams are pathways, for instance, while ponds and lakes are containment. But those categories transcend every land use that you have. That generates patterns right away. The other thing I often look for that really highlights these patterns is looking at borders and edges. You usually get contrasts from one side to the other. Color also adds another huge dimension.”

Alex has just wrapped a gallery showing that was entitled “Alex Maclean: Aerial Perspectives” at London’s Beetles + Huxley, one of the world’s most prominent gallery spaces. Details of his work and the online gallery can still be seen on the site at that link and is well worth checking out.

Editorial Photography / August 13, 2018
How to Get the Most Out of and Do More With Your Travel Photography

nice. Thanks for sharing. Many beautiful images. That must be how God sees us too :)

From the colors to the composition, these are fantastic. I especially enjoy the photos of the boats and highways.

Great shots just the one with B-52's is really sad... America's people pushed by their's corporation system paying their taxes $$$ towards killing machines like no other country in the world. So many great thinks good be build for the price of those wasted lives. Simply sad IMO

Josef, yes it is sad! Think of where America would be had we just kept all of that money for our own social programs. Good news! The American people have gotten tired of defending freedom in the rest of the world. We are worn out of paying and getting nothing. We are turning inward. We want free health care, cradle to grave entitlements and twelve week paid vacations just like you guys and we've figured out how to get them!
Till now, most of Europe and the Common Wealth has been able to provide those things to their subjects at Americas expense. After all, when you don't have a military and don't have to worry about the R&amp;D on the machines that keep you free, you've had plenty of money for your social programs. Happily for us, that's all starting to turn around.
Unhappily for most of the rest, if you wish to remain free, you will have to field your own armies now, police your own borders. America has done the heavy lifting far, far too long, financially and militarily.
You're all on your own now. Obama has cut out military in half and our young now prefer to "play" war on x-box and sony play station. We are easily to defend OURSELVES anywhere in the world but are no longer capable of say dealing with Putin or the Iranians when they come knocking on your door. Do you imagine Putin is going to stop reassembling the former Soviet Union after Crimea? Ever wonder what London might look like after some mulla detonates a suit case nuke at the House of Commons?
We are going to be leaving that up to the EU and NATO now.
It has been out pleasure and you're welcome for your quality of life till now.

Well I can see your point, but I have to say I do not agree with it. I do not want to play politics here at photographers blog but from my very own experience as I grew up in a former communist country I can see what was better at those time than it is right now. Honestly I do not believe that your politicians, bankers and businessmen would entered any war if there would not be a profit from it. War is a business! Big one. And either it is Russia or USA both play it very well so they can have a profit out of it. Your social system is where it is because your representatives got greedy on you as a nation and instead of giving you what guys in Sweden, Norway, UK, France or Switzerland have as standard you have to pay for it with your visas. Sad again. If you go back in history and read multiple sources how wars started not just the official versions from CNN you might get surprised and shocked at the same time. Every single bomb, plane, tank which was build in order to make more money had to be used or even better destroyed so it can produce a need for building a new one. Have you did your homework about Vietnam war? It was a war which should never be won. Why? Just so the army supplies could get low again and the army contractors could produce new ones all over again... from your taxes btw. This world is driven by evil societies these days, who are after wealth of all of us in any country we are at. And image like this one above is showing us, yes this was happening and yes it is happening... Believe me, those planes were not build for my protection. If I was a kid playing good and bad guys I could chew on it. Sadly I grew up very quickly and when it comes to wars and politics you see in the news, nothing is what it seems to be in reality! I had a quality of the life when I lived under Russian influence in Europe and looking back there I would not change it even if I could because it was not worse than what you have right now!, And I have the quality of the life now when I do not live there anymore too. I made choices for my family so we can have it, but there are hundreds of millions in Africa, Asia etc... who would take a dry bread into their mouth if only they had one. I had been in the USA couple times, and I met regular people, folks working in the fields, businessmen you name it. There were just fine like any other guys in another country. I do not think about americans anything bad, I have friends from the states, very good ones and I just feel sorry for them and the whole nations where it got since the time of Franklin! You can do better. Just believe in yourself do what your guts tells you is good. And if you believe in God, and pray for it, sure you will get it. God bless all of you so you can recognize who is helping you in reality and who is just making money of you! Read, think and act! Thank you and again this is my opinion, I respect you have your own so let's hope you are right, because you live in it, not me! Thanks.

Jozef, imagine how nice Europe would be now if American killing machines did not stop the Germane madman in the 40's. We stopped them when nobody else could.

It's our big killing machine airplanes that protect your freedom. People like put in or the Iran nut jobs are not afraid of your country. Bully's are only stopped by people with bigger (killing) machines than theirs.