Photographing whale sharks tends to be a top bucket list item for many underwater image-makers, and for good reason. The largest fish in the sea, whale sharks offer uniquely special photo opportunities. For those of you who have yet to photograph one of these gentle giants, I’ve put together a few tips to keep in mind for that first encounter.

While most images of whale sharks may evoke an environment of peace and serenity, all too often the images are drawn from crowded chaos. A lot of commotion and excitement takes place on a boat (and neighboring boats) when whale sharks are in the vicinity. My first encounter with a whale shark was in the Maldives, and was far from the blissful magic I had envisioned.

It was November of 2012. My small group of divers had just completed a dive where we were disappointed not to have seen any whale sharks. Just after boarding and dropping our tanks, the captain yelled “whale shark.” We all quickly geared up as snorkelers, hopped off of the spacious liveaboard and onto a small zodiac. We whizzed towards a group of crazed swimmers, moving in the same direction we were. Apprehension set in.

Everyone rolled backwards and swam with great force towards the mob scene. I was the last of the group, with my awkward fins and new underwater housing slowing me down. Or perhaps it was my overall fitness level? Anyway, we’ll just blame it on the fins and housing. Sadness overcame me as I watched the speckled giant disappear below a frenzy of divers into the Indian Ocean.

I levitated on the surface, listening to the excitement of others in the distance. As I began to melt into the turquoise blue sea, the gentle behemoth turned around — as though he was answering my calls to him. Headed straight for me, he ascended from the depths.

Mesmerized by this beautiful creature and its grace, time slowed. Moments after my first few shots, the shark was within inches of me. Raising my legs to avoid touching his dorsal fin, he glided past, without touching me. As wonderful as that was, the moments that followed were far from that. Crazed snorkelers plowed past me, over me, under me and around me — kicking and screaming to keep pace with the quiet creature. Fins made contact with my snorkel and mask, dislodging my snorkel from my mouth.

Seawater burst in, I coughed and screamed, but no one cared. No one stopped to help. The onslaught continued — my brand new dome port, scratched by someone’s fins. That beautiful encounter ripped away from me.

The range of emotions that took place in the span of five minutes was impressive. I cycled from hopeful to disappointed, defeated, sad, then to surprised, and happy, content, to terrified, then angry, concerned, and hurt — the latter, both physically and emotionally. It was an exhausting few minutes that would haunt me for many years. When I finally did get back in the water with whale sharks it was under very different circumstances. Much more controlled, and with a group that had seen whale sharks previously. No mayhem, no near drowning. My faith had been restored. 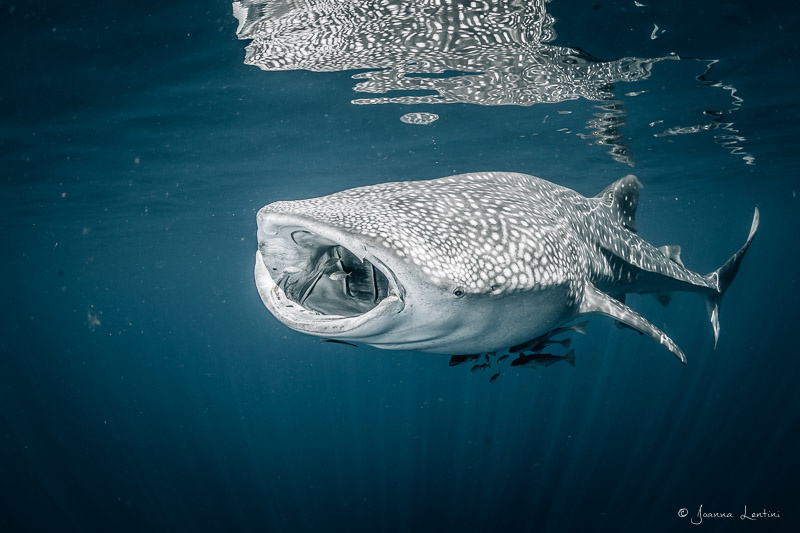 I share all of this not to frighten anyone, but for others to do their research and be prepared. It’s amazing how quickly we can forget all sense of decency for others and the animals we are in awe of. With all of that said, many things have changed since that initial encounter in 2012. Many countries have laws that now control the number of people in the water with whale sharks and the ways in which we can interact with them — such as strictly on snorkel and set time limits. And so, I definitely encourage others to seek out interactions that are done in a much more controlled way.

Here are a few pointers for making your encounter go as smoothly as possible:

1.  Travel with a reputable operator — one that puts the safety of the group and the animal first.

2.  If you can fight the urge to get in the water, sit back and watch how the group, and any others in the vicinity behave on that initial encounter. More than likely there will be another encounter, and you will be better prepared for it. Perhaps, you should share any observations and trepidations with the guide or fellow guests. Oftentimes, with all of that excitement people don’t fully realize how they are behaving.

3.  Remain as calm as possible for both other snorklers and the whale shark. And try to be mindful of people swimming behind you. Kicking hard can disorient others, and injure them and their equipment.

4.  A lot of commotion in the water will result in air bubbles on your port. Be sure to give the port a quick, but thorough clean before you shoot.

5.  Use a fisheye lens! Remember – These are the largest fish in the sea, with many close-up opportunities.

6.  Jump in with your camera settings ready to go.

7.  If you are snorkeling, leave the strobes behind. They will only drag you down as you try to keep pace with the shark. You’ll have plenty of ambient light at the surface.

8.  If you can free dive well, and it is allowed, drop down below the surface and photograph the shark with the mayhem above or try to create a silhouette.

9.  Wear a wetsuit. Swimming at the surface can be tiring, especially with an underwater housing. Having some neoprene on will help keep you buoyant if you get exhausted.

10.  Bring a whistle or reflector. While it’s not likely, getting separated from the group is something to always be prepared for when you are in the ocean. Have some sort of signaling device attached to you.

11.  Hydrate! Cramping is a common occurrence when swimming long distances. Know how to sort out a cramp on your own with your camera.

12.  A commonly coveted shot of a whale shark is with its mouth wide open as it filter feeds; however, consider other options such as over-under images, surface reflections, and shooting down to reveal their beautiful markings.

Finally, try to avoid the masses. Seek out small-scale eco-tourism operations wherever possible. The economic value of whale shark tourism has had a positive impact on preserving the species, as fisherman are finding more value in keeping them alive than in finning them. However, the large groups create an unpleasant experience for both you and the whale sharks who suffer stress from the unintended harassment. Keep it intimate if you can, and always be sure to respect the animals you encounter.

Hopefully with these tips you're first encounter with a whale shark will go much smoother than mine and you'll walk away with some beautiful images. Do you have a whale shark encounter that you'd like to share? Comment below.

Fantastic article. I didnt know I wanted to photograph whale sharks until today.