How the Periscope App Can Help Your Business and Creative Education

There’s been a multitude of social media apps popping up for us to use at our leisure and it might be hard to stay up to date. The most recent of them being Periscope. Periscope was recently purchased by Twitter before it was even launched in the app store, and it’s steadily gaining traction. It was developed as a real time news app but the possibilities in the creative realm are endless.

I hopped on Periscope right after it launched because the idea of real time updates and allowing them to only be there for the time that you are filming was extremely exciting to me. The app explains it as the idea of teleporting yourself into someone else’s shoes on the other side of the world. The question is, how can we use this to grow the community for a better good? Live streaming apps like this can help drive impulse purchases and build followers who may eventually translate into clients or customers. Periscope also has a few things that can really emphasize it’s ability to incorporate education.

Questions: It’s gives watchers the ability to ask questions in real time. So think about creative live, and how they have someone monitoring the questions that they ask whoever is teaching. This gives us that ability in our own real time setting.

Saving: Periscope gives you the option when you are done broadcasting to save the video to your stream. It gives an educational opportunity to those who can’t watch you at that time, to watch it within the next 24 hours. On the other side, if you’re interested in having just a one time video, you don’t have to save it to your stream. Poof, gone.

Feasibility: When we have spree casts or live video chats, trying to manipulate the computer to be able to view everything you’re doing is tough. You can prop your phone up anywhere you want and it can stream a lot easier. The other day I was riding a bike through traffic and had it stuck out of the top of my purse streaming for a good 20 minutes. You can have your assistant follow you through a set as you do a walk through or while you're in a shoot. 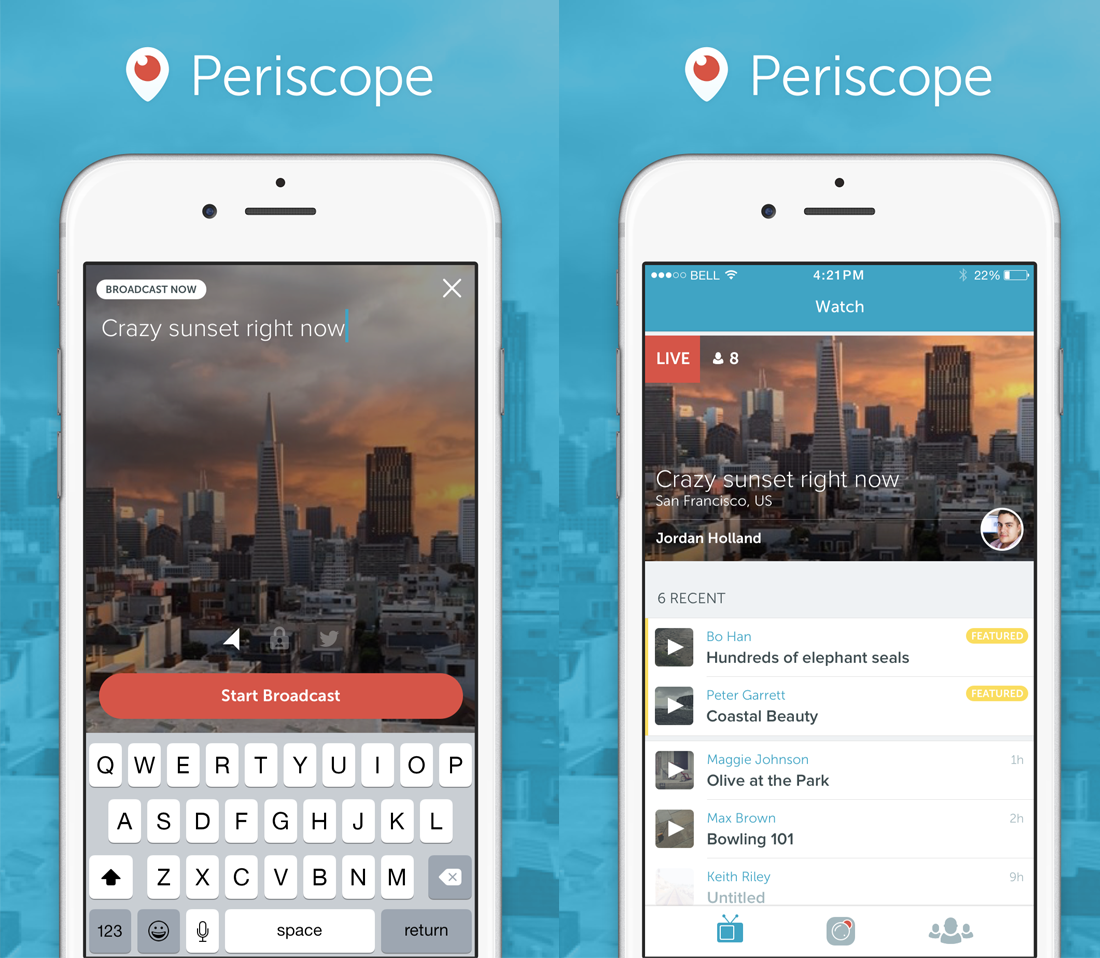 Here’s a couple creatives and the ways they’re using Periscope to engage and develop the creative community. Their Periscope usernames are in parenthesis so you can search them within the app.

Peter Hurley (@peter_hurley) was named one of the 12 Top Tier Portrait Photographers You Should Know by Resource Magazine and his use of Periscope is rather entertaining. He’s just as eccentric on video as he is in real life. His use of shebang is prevelant and his videos are vastly different. He posts behind the scenes videos from his shoots as well as random snippets of his life like, his titled video ‘Vacuum sealing prunes’ or ‘we’re carbonating water here people!’ His feed is sure to put you in a good mood.

Andy Baker (@ajbake) is the creative director over at National Geographic. We’ve posted about his Client Blog a few times where he gives us the double perspective on being on both sides of the table for big name shoots and campaigns for NatGeo. His Periscope feed is filled with some of the most interesting behind the scenes footage building up sets and productions for their campaigns and videos.

Joey L (@joeyldotcom) is one of the leading photographers in the commercial industry but is also known for his strong personal work overseas. He works on a lot of projects for National Geographic, which means he’s getting a little bit different perspective from Andy Baker as mentioned above.

Tony Roslund (@tonyroslund) works Tony Roslund has embraced the instant dissemination of content through live streaming apps like Periscope to provide Behind-the-Scenes walk-throughs of sets, which gives potential clients a peek into his processes and approach. It also helps as a marketing tool for his recently released tutorial on product photography.

Sarah Williams (@thisradlove) I use Periscope on a couple different levels. One, I live in DC so the aspects there are pretty interesting. We had something called the Cherry Blossom festival a few weekends ago so I Periscoped the crowds and the monuments during sessions, as well as my bike ride across town weaving through traffic. I also have a workshop coming up in San Diego that I intend to broadcast portions of via Periscope.

If you’re interested in keeping up, download Periscope here(https://itunes.apple.com/app/id972909677). Also, make sure to follow the FStoppers (@fstoppers) stream, i’ll be heading up the social media at the Bahamas workshop starting next week and it will definitely include some behind the scenes Periscopes from classes.

If you're on twitter, you can watch them on your desktop!

I must recommend Brian Matiash (@BrianMatiash) and Colby Brown (@ColbyBrown) if you are into landscape and nature photography or Sony mirrorless gear. Both have done informational and entertaining live-feeds on Periscope.

What is an alternative app to use for Android users?