Architectural photographers face many technical challenges when shooting massive structures, especially when space to shoot from is limited. This is one of those cases in which the gear absolutely enables the photographer to take better images.

Venus Optics – Laowa has been creating some of the most unique lenses available on the market right now. The brand specializes in wide varieties of macro lenses and unique wide-angle lenses. Just this year, they released the Laowa 9mm f/5.6 FF RL, the widest full frame rectilinear lens on the market, an 11mm f/4.5 FF RL, a 14mm f/4 FF RL, and a 10-18mm f/4.5-5.6 zoom lens in addition to their 12mm and 15mm f/2.8 Zero-D lenses. And while they seem to have created a lens for every focal length that they could think of beyond the standard of an ultra-wide-angle lens, Laowa has just created what could be the most innovative ultra-wide-angle lens of this decade and quite frankly, a long-awaited alternative to the much more expensive counterparts from Canon and Nikon. In this review, we take a look at the Laowa 15mm f/4.5 Shift lens. 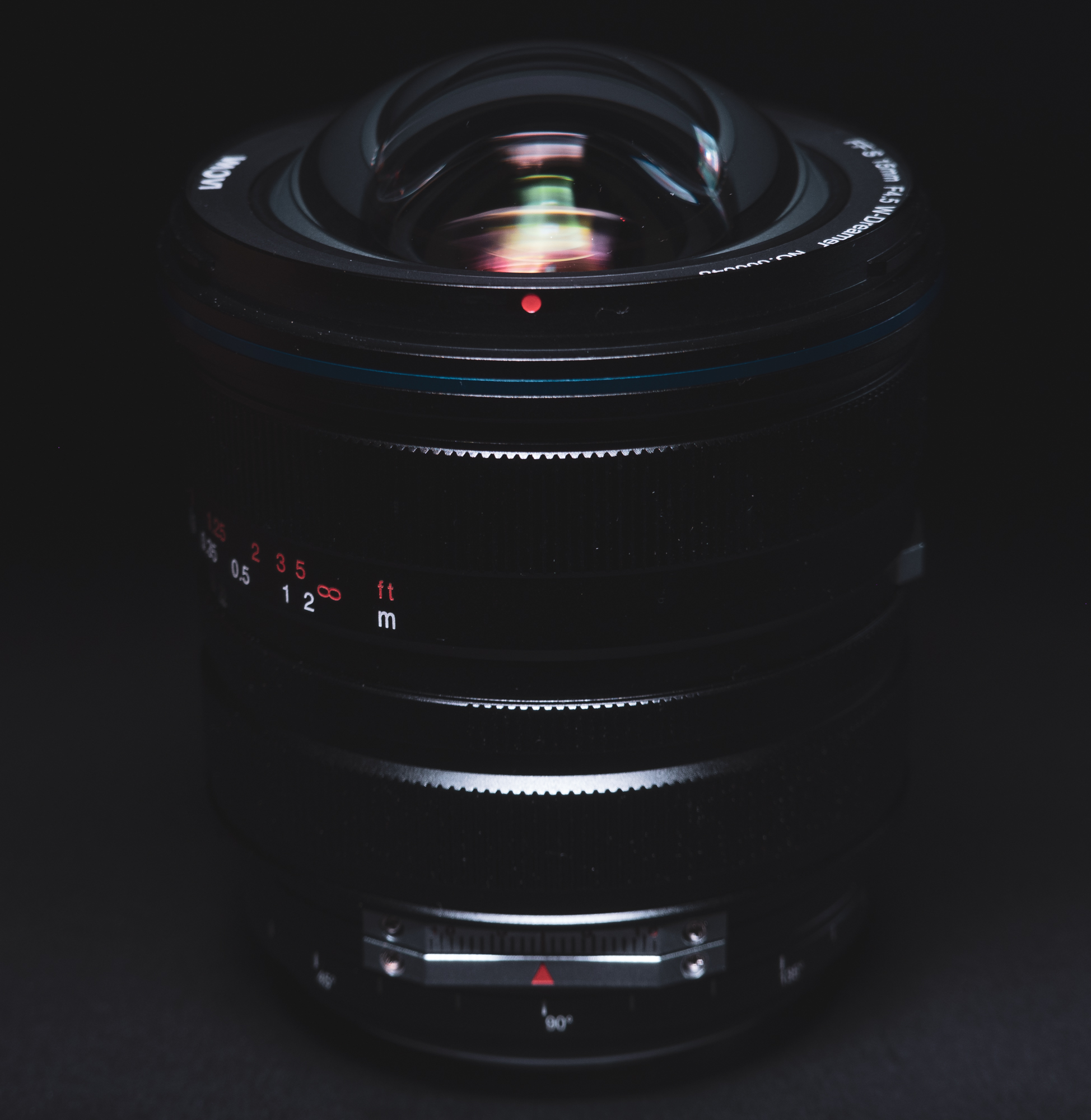 Laowa has always been consistent with its all-metal black lens design from its first batch of lenses. This lens comes with a similar all-black finish with a blue ring accent near the front end. Weighing in at 597 grams and just about 3.1 inches by 4 inches, this lens registers as both smaller and lighter than most 15mm lenses available on the market (exceptions to this also come from the brand). It comes with an all-metal thick protective front lens cap that mounts in the same way that a lens hood would and a standard plastic rear lens cap on the bottom.

On the most distal portion is the manual focus ring made of a textured metal grip instead of what’s usually made of rubber. This may be quite minor, but it can be appreciated that this type of grip on the zoom and focus rings offers a more standard tightness as compared to adhesive-bound rubber grips. In the middle of the barrel is a clicking aperture ring with stops ranging from f/4.5 to f/22. This aperture ring is less than 0.5 inches and is only separated from the next ring by about the same distance and might accidentally be turned when using the third ring. 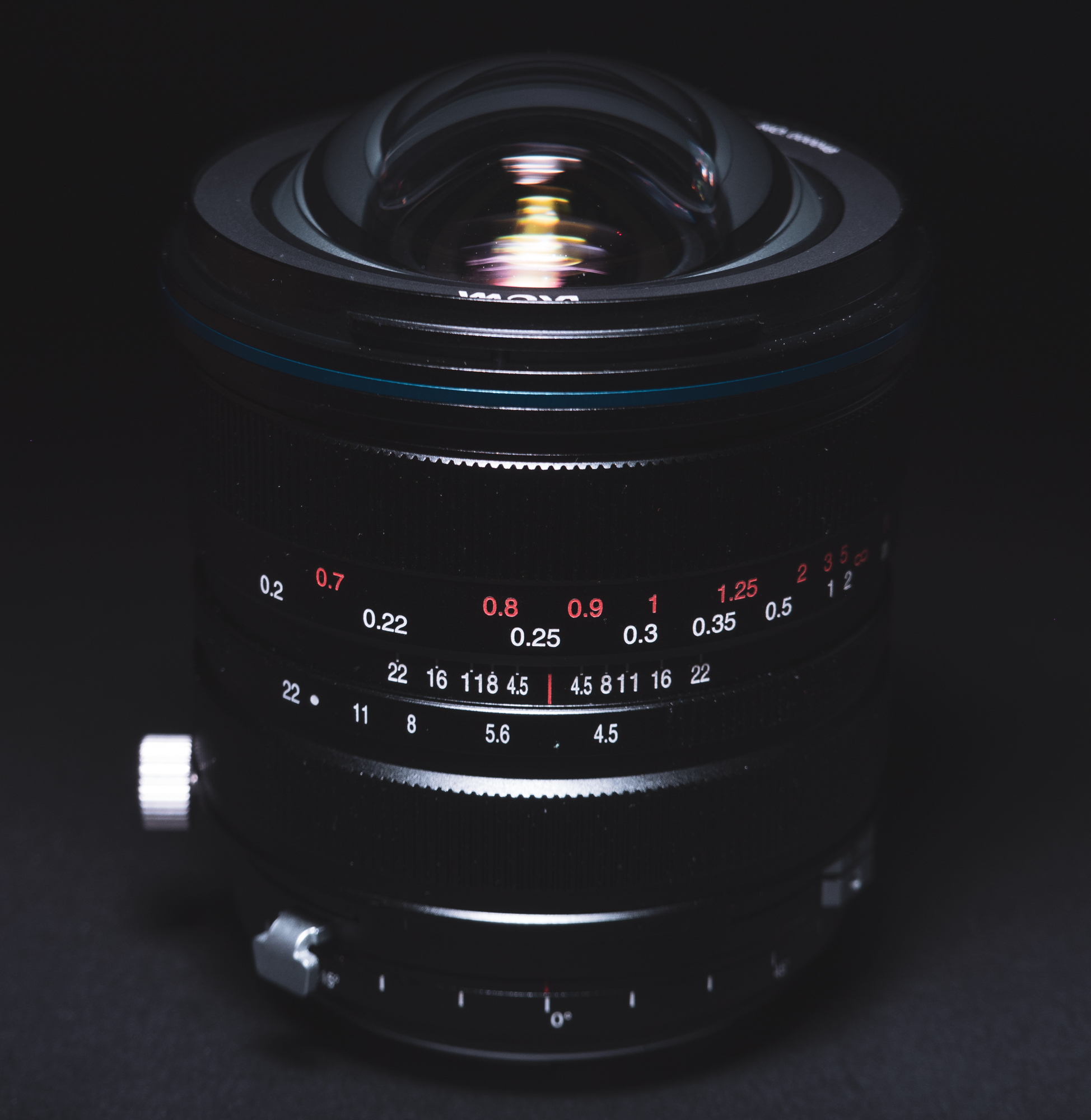 The third ring is entirely dedicated to shifting the lens, which, in my opinion, is a better mechanism for this. Canon’s  17mm f/4 TSE uses knobs that are quite tedious to maneuver, especially when the lens is shifting against gravity. This shift-ring mechanism makes it easier to control how much the lens moves up and down (or side to side). 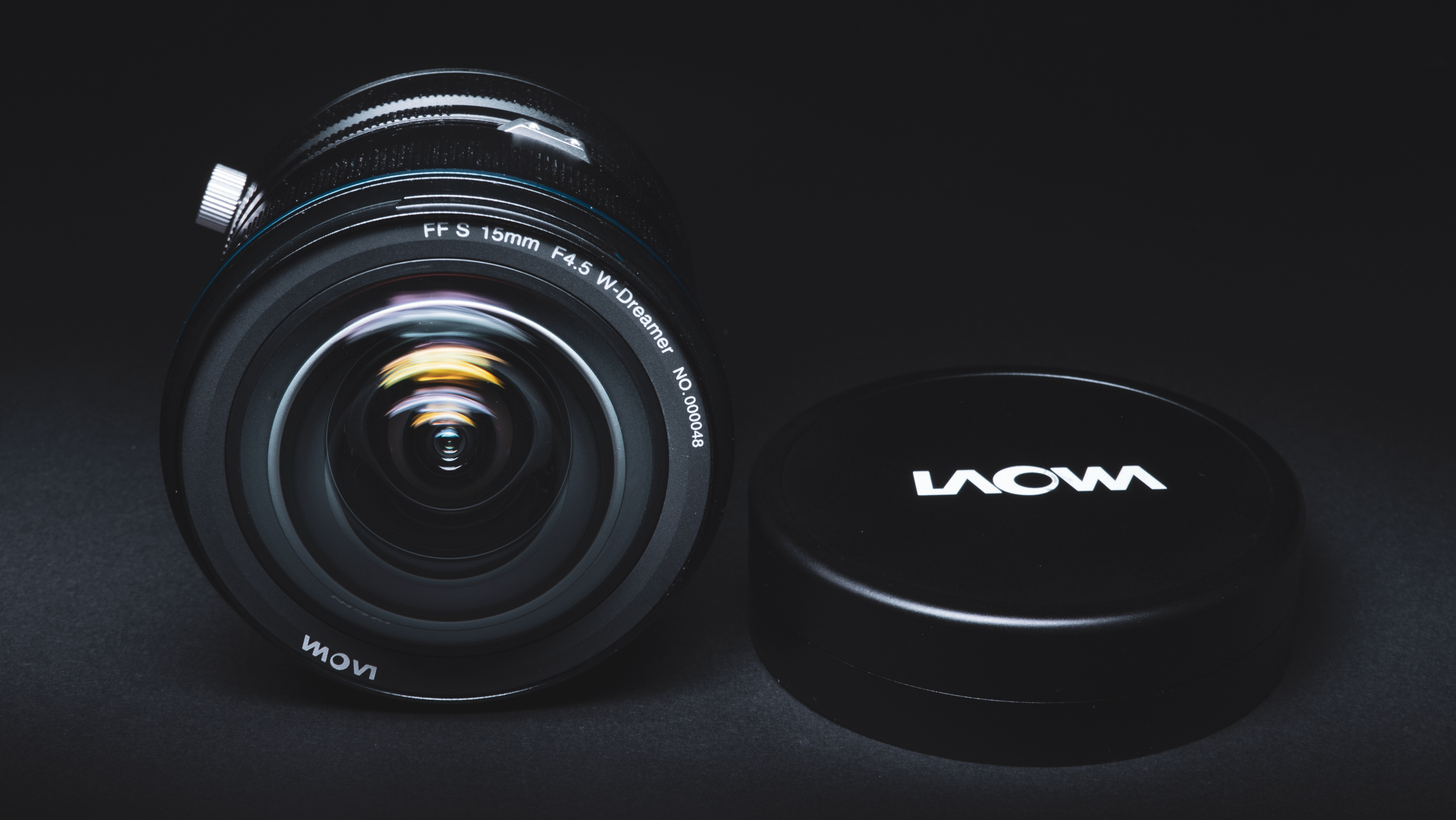 On the lower third of the barrel is also a small metal knob to control the resistance of the shift, which is handy but isn’t quite useful because of the simple fact that the lens isn’t too heavy to begin with. There’s also a silver button on the most proximal part of the barrel that controls the 360° rotation of the lens. 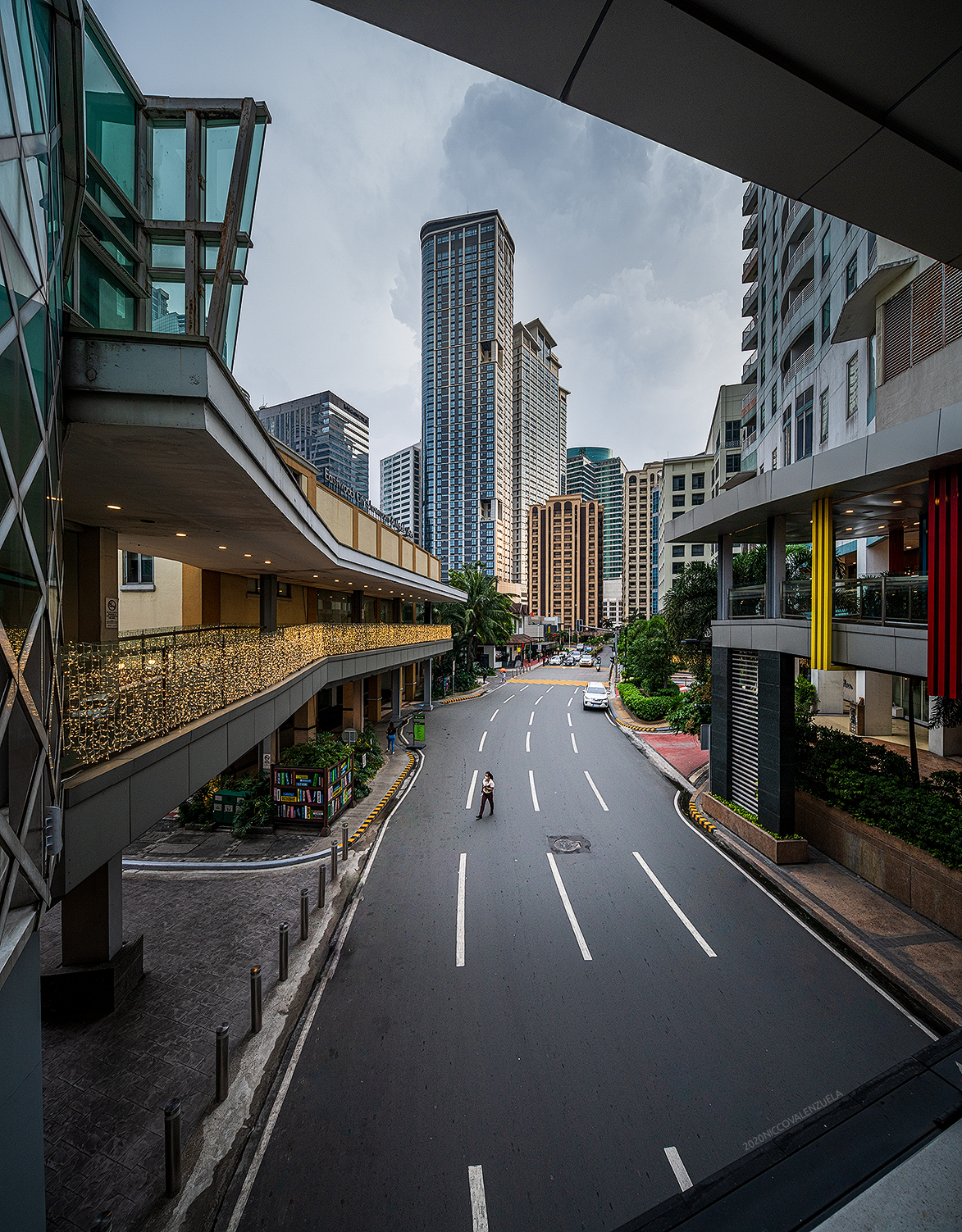 When I tested the Laowa 9mm f/5.6 FF RL a couple of months back, image quality was definitely the most striking feature I found on it, and it was such a delight to see that this 15mm shift lens performs quite similarly. When at a neutral position, it can be seen that close to 100% of the frame is rendered well with significant sharpness. Image quality was quite consistent throughout the extended range of the shift as well, except for about a 10% decrease towards the extreme ends (when the lens shift is maxed out at 11mm on both sides) along with minimal vignetting in the said regions, which is quite understandable given the optical elements and the fraction of the area of the glass that is actually utilized to be able to take those extremely shifted frames. 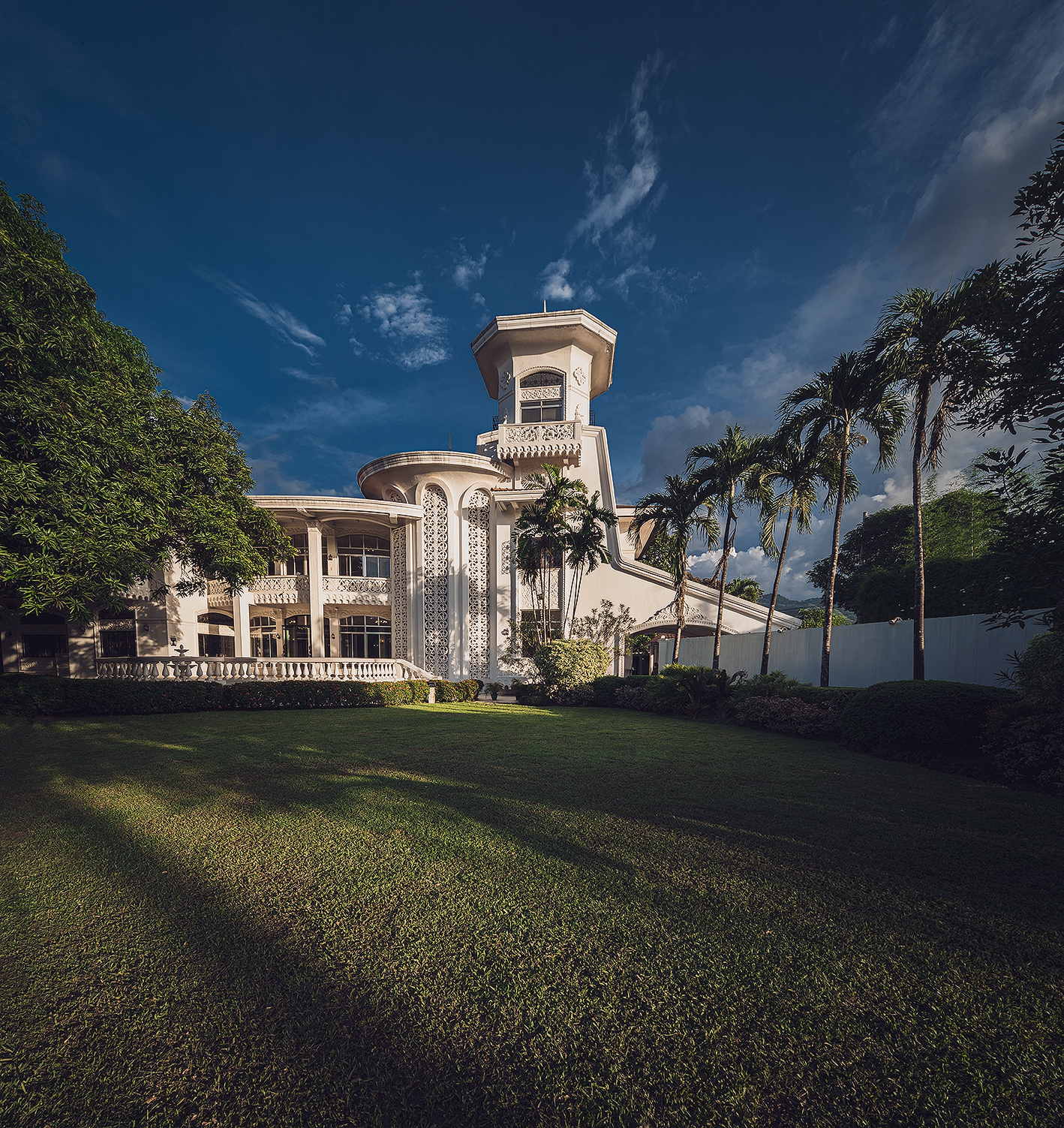 Lenses like these have quite the tendency to flare when directly hit by focused light sources at certain angles, especially since there is no lens hood that covers the periphery of the bulbous front element. However, the resulting flares are quite manageable overall. Considering the wider focal length, it was a delight to see very minimal chromatic aberration on the images, meaning it performs remarkably better than the tilt-shift lenses that last got released. 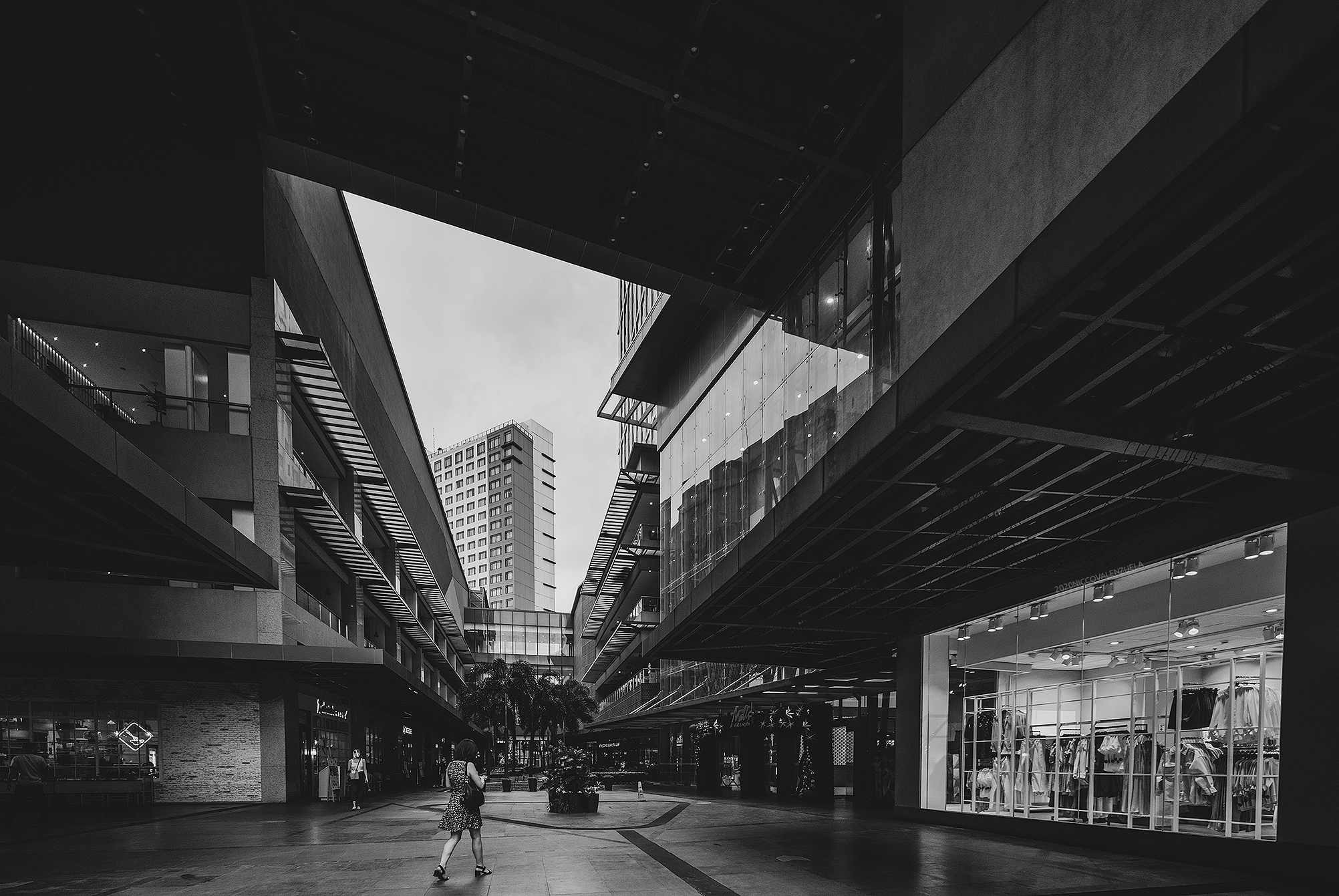 I never really get fascinated by the light bursts created by small apertures on lenses, but I could really say that the resulting thin and sharp light bursts on these images at f/16 are quite attractive compared to what I’m used to. 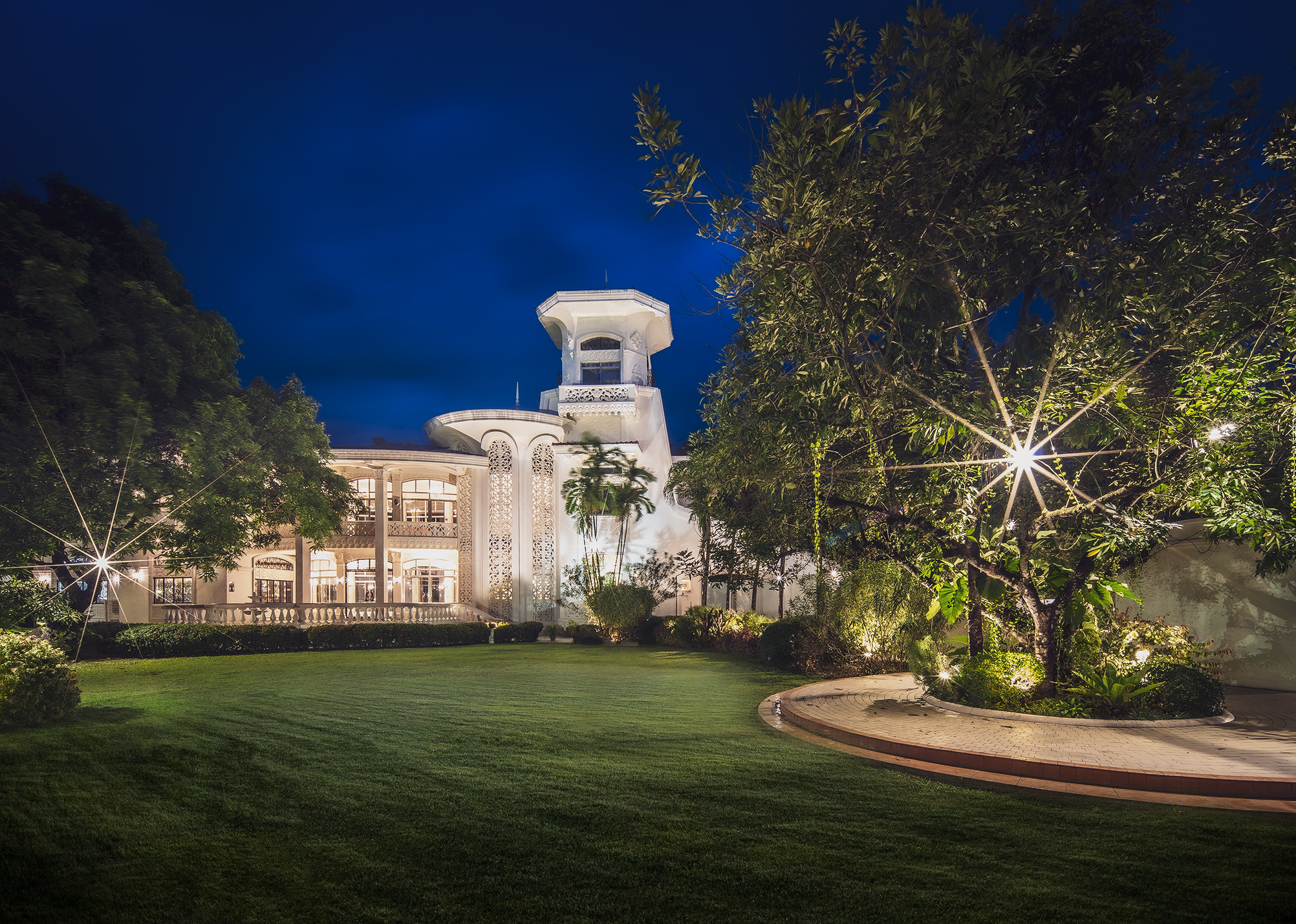 As an architectural photographer who often deals with very tall and high tower exteriors, this lens really does address the common challenges that I encounter when shooting. For photographing very tall structures from a lower vantage point or even on ground level, the combination of the 15mm focal length and the extended frames that I can produce by creating shift panoramas allows me to capture the entirety of the structure from a distance virtually across the street. With the camera in vertical orientation and the shift axis in vertical as well, one can achieve the longest extended frame to capture a tall skyscraper.

This lens can also be quite helpful for photographing cityscape panoramas as well. With the camera in horizontal orientation and the shift axis in horizontal, one can create an extremely long ultra-wide-angle panorama without having to deal with distortion and warping and virtually no wasted pixels.

Corner of a six-inch thick ledge as foreground

With the camera in horizontal and the shift axis in vertical, one can create panoramas that can cover interiors of small to medium-sized rooms from floor to ceiling with enough room for foreground elements. Given the minimum focusing distance of this lens of just 20 cm, it can also be used to photograph small items or products up close with a wide vista in the background. This can be a good tool for shooting small objects outdoors while eliminating distortion and taking advantage of a grand wide-open view in the background.

According to the brand, the Laowa 14mm f/4.5 Shift lens will be available in late November 2020 for Canon EF and Nikon F mounts. Canon RF, Nikon Z, and Sony FE mounts will follow in the first quarter of 2021.

I guess the absence of that function allowed for it to be more economical. Personally, I never had any real use for tilting on the Canon 17mm TSE

I use the Canon 17 TS-E and have only used the tilt a couple of times. Nearly useless with such a huge DOF but more importantly, it can get nudged on occasion and if you are not careful will mess up a shot.

For such an architecturally-focused lens, I really wish they would have toned down the sunstar effect. I've seen it on some of their other products, but it feels like even more of an issue on this style of lens.

It's a design choice influenced by the number of aperture blades and their roundness. While I'm not a lens designer, I wouldn't expect having a smoother aperture to cause any negative effects.

I think sunstars being detrimental to a shot are kind of an all-or-nothing thing. Even a softer, less pronounced one would be a distraction. So it might be a matter of being able to eliminate the strong light source altogether. Like on the sample shot above, I eventually asked the people there to turn off the big lights. Of course, I had to use that one to show the sunstars that the lens produces.

It's a great example - not critiquing that part. Unfortunately, at least in the 15mm that I reviewed (which wasn't T/S), I was getting them on even distant street lights. It'd be a lot easier to have a rounded aperture and add the star effect in post if desired, rather than have to deal with it in every shot.

What I do for shots like that is I take one with the largest aperture, focused on the part where I want the sunstars to tamed, and blend that over the main shot. (When I'm in the mood. Lol)

If it behaves similar to the their other 15mm options, I noticed it by as low as f5.6 on a particularly bright single source (read street light). Even with T/S, I'd want to be able to stop down to f/8.

The Laowa product page mentions the GFX, but not the mount for it... I guess you need an adapter?

Just confirmed this, yes, you need an adapter for medium format.

At about half the price, its much more attainable.

Nicco, does the pre-production copy you used have electrical contacts to pass data to the camera? Or is it like other Laowa lenses (12mm + MSC) with none? That lens requires manual input of FL in Nikon cameras and does not allow for DMF for a sony mirrorless mounts in my experience. DMF with this lens on a sony mirrorless mount would indeed help it compete with the Canon 17mm TSE.

Sadly it's a DSRL-lens, not a native lens-design for mirrorless cameras.
Otherwise I would have bought it immediately.

Still a bit vaporous; the mirrorless mounts won't ship until at least Feb 21.

You've got company there.

Any word if the Sony mount version will be purpose-built for mirrorless or effectively the DLR lens with a permanently attached adapter like the Laowa 12mm?

Nicco, did you experience any issues with coma when shooting interiors with this lens? I have found it to be the fatal flaw with the Laowa 12mm + MSC combo. Shooting indoors with potlights above created an elongated flare from the specular highlight that was unnatural, downright ugly, and time-consuming to remove. Curious if the 15mm Shift has the same issue. Thanks!

As I shoot with a Fujifilm X-T4 - an APS-C body - I mainly rely on full-frame lenses with adapters to achieve a similar TS-FF ratio. I picked up the Laowa 12mm and fitted it with a Fotodiox Pro shift adapter which works pretty well as an 18mm FF equivalent.

This lens looks like a good option to get something close to a 24mm. However, since the shift is on the lens and I'd have to use a static adapter, would the fact that the shift plane is further from the sensor make any difference in terms of vignetting?

I had the same combo when I was still using an XT-2. I can't guarantee for sure since I havent tried this with the XT2 but I think it shouldnt simply because of crop factor.