If you haven't been keeping up with Casey Neistat's daily vlogs, then you absolutely need to start. They're a great source of creative inspiration, lots of running cut-scenes, and the occasional viral video. In this particular vlog, Neistat tells a story on the importance of not quitting and, while filming, experiences an error with his Canon 70D. You may not believe how he solves it.

As seen in the video above and the surprisingly cathartic GIF below, sometimes the only course of action is a little smashing.

Long-time Neistat fans will already know how much he likes working with compact cameras for their size, portability, digression, and reliability. While I'm not a Canon owner or video expert myself, I'd have to imagine the error he keeps getting has something to do with the fact that he's rocking a Transcend SD card. Time to step up your memory game, friend. 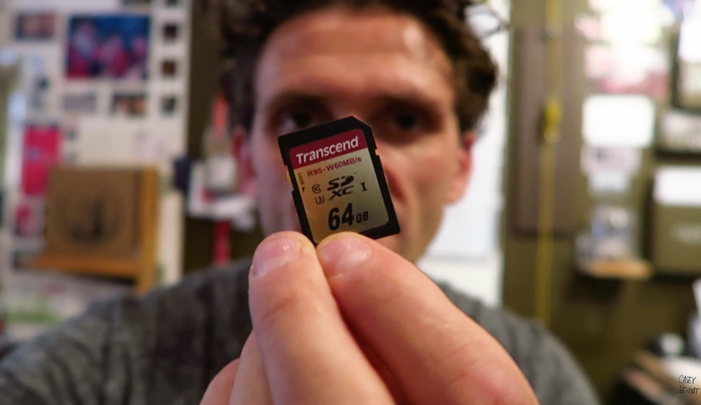 If someone can dig up his office address I have a couple SanDisk cards that I know won't let him down.

Whether or not you thought it was funny watching Neistat chop the heck out of that 70D, you have to appreciate the moral behind his story in the vlog today: don't quit and don't let gear get into your way. To check out more of Neistat's videos and his daily vlog be sure to head over to his YouTube channel or check him out on Snapchat (@CASEYNEISTAT) and Instagram.

"movie recording has stopped automatically" - worst bug ever, the camera had to be destroyed

Let me be the first to give you an unofficial welcome to Team Nikon, Casey. We've been expecting you.

What's the craziest DIY "fix" you've done with your camera? Let me know in the comments below, and if you think you know the solution to the "Movie recording has been stopped automatically" warning be sure to let him know before he smashes his 5D.

I bet he got a "fake" memory card off of eBay or Amazon and that is why Canon is giving him that error.

Yes, it seems that error is related to the memory card far more than the camera itself. He destroyed a camera for virtually no reason, other than publicity of course.

Always bought Sandisk cards and never had any problem. I wouldn't touch Transcend with a stick.

It's quite a surprise that Casey wouldn't know better why the camera stops. It's not a bug, it's a slow ass SD card.

The only memory card i have ever had fail on me completely (to the point where recovery software didn't even work) was a Sandisk cf card purchased from Adorama...

Can't stand this guy. He's built this image of being some scrappy counter culture DIY guru who sticks it to the man but it's completely false. All of his videos use a specific formula for creating something "viral" almost all of his videos are sponsored by big brands. I figured after the whole Walter Mitty thing people would stop taking him seriously

He says in most of his new videos that he isn't being sponsored though.

I primarily shoot video on a Canon 7D, I've had the exact same errors he had in the video, however I use Sandisk Extreme Pro cards. I narrowed the error down to whenever I use the card, stick it into my computer & rip the footage off & then stick the card back in the camera. If I don't format the card, the first 2-3 times I hit record on a video, it will give me the same error. However, I've come to expect this, for whatever reason, so I do a few dummy record shots until the error stops & I can then go about recording a full clip.

I love his videos but this one is just embarrassing. He's blaming canon for making a crapy camera when in reality he is using an SD card to record video to. No matter how fast of a SD card he puts into the camera it will read at a maximum of 20mb/s. The IPB compression records at 31mb/s and All-i compression records at 91mb/s. So when he was getting that loading bar symbol, it was telling him that his buffer if filling up. There is a reason why canon put a CF card slot in the camera.... Just saying...

Transcend, Sandisk, whatever you can get your hands on, it does not matter. I've been using 4 Transcends over the last years, for many advertising shoots. They never let me down.

I don't think I ever heard of this guy before, and after watching half of his boring vlog I'm sorry I wasted my time and doubt I'll ever watch another one. As the knowledgeable and honorable Lee Morris pointed out, the guy was probably using a counterfeit card and that was the trouble, not the Canon camera that he smashed to bits.

Error message aside, Casey is cool. That may not be your first impression but he's quite a decent guy -- and pretty creative. Google "Casey Neistat bike lane" for a great YouTube vid.

What a waste of time to watch this childish guy. I have the impression that fstoppers has hard times to find interesting movies. Crappyy titles, uninteresting articles. Are you becoming the Ikea, Starbucks, McDonald of the internet?

I like Casey. But the first thing I thought when I saw this video was "idiot." I've had this problem a lot of times, especially when starting out with DSLR video, and it was always solved with formatting my SD card. Now that I've started working professionally I've obviously done some research and upgraded to Sandisk Extreme Plus/Pro cards so I've stopped getting this error, even if I'm moving between different camera models and brands.

He's a great storyteller but doesn't really understand anything about the technology, and before now hasn't really claimed to, but to break a pretty much new 70D when you could walk to literally any other filmmakers office on the same floor as yours, is just stupid, and seems like a stunt to get people to watch and react. The ironic thing is that as the DIY man he is, you'd expect him to at least Google the error before breaking shit, but I guess when you can afford to spend €1000 on a new camera on a whim when you want to axe your old one, who needs Google?

I've been using the 60D for a few years and this happens to me on a fairly regular basis. I'm using pretty fast Sandisk cards and this still happens to me. Anyone know why?

Hello David, Do you format your cards in camera after using them in your computer? That's the #1 problem with write errors I see. Also try to be sure your cards' contacts a clean and free of finger oils.

This sounds like a problem from the non formatting of the card in the camera, in addition to the risky cards. I dig Casey's vibe 85% of the time, and hope he's not going to attempt to pass this off as a Canon thing.. because Nikon's are even more finicky about the flavor of memory cards you feed them. Good practice people: deep format your memory cards when you put them back into your camera after off loading data on your PC or Mac. Just a good idea to minimize risks.

I think the whole point is: "I don't have to deal with this stupid nonsense error messages". If the problem is slow card/full buffer, why the camera simply state "Movie stopped recording"? This shows a complete lack of respect for the user and the most simple usability guidelines. And even so, he have a capable card, he shows it, so he is aware of the cause. So once again, why the error continues? Axing the camera is not justified but it probably wasn't the first time or first try in solving it. So if you can afford axing it and getting a different one, why not?

If everyone has a video camera, and they record everything, how is anything interesting?

That's a surprising question coming from an artist. "Yesterday" by the Beatles has been covered over 3,000 times. That's 3,000 musicians looking at the exact same thing and giving us their interpretation. Art isn't about what you capture. It's about saying something different about what you've captured.

What I'm trying to say is this dude is diluting the pool. He records himself opening mail, carving his name on his Macbook Pro, and him running and jumping over the bumper of a police car. People watch this and think he is a genius. Look, it's just my opinion, but when this becomes "art" and gets 500k views we're all f**ked. It's souless dribble and society, as a whole, is worse off for this. Again, just my opinion, which is as relevant as Casey's opinion.

I agree it's the card, not the camera. It certainly wasn't the lens.

Used to be super into him, but feel like he's alienating the mature audiences lately...