Creating a Conceptual Portrait for a Poet

It’s always nice to work with a client that has as much invested in making a great image as you do. I recently had the opportunity to work with poet and academic Katie Schmid for some portraits.  Outside of her own poetry, Katie writes for a few blogs and online magazines. Katie knew she needed a fairly standard image to use with those publications, but expressed interest in creating a second image that better captured her personality.

I’ve known Katie for a long time. She’s a friend first and a client second. I know her to be kind, intelligent, well spoken and knowledgeable about many subjects. She’s also witty and incredibly funny. That humor can be found in many of her writings, and we needed to zero in on that same sense of humor and sarcasm for the photo.

WHY WE ARE MAKING THIS IMAGE

We started kicking around some ideas. Along the way, Katie shared a recent article that discussed how Szivlia Molnar had been mimicking and mocking some famous writers by photographing herself in similar poses. Understand that Molnar was not only copping the attitude of the shots, but she was also shedding light on a weird fixation that male writers apparently have with smoking on camera. A little research yielded a load of very serious, very smoky author portraits of many famous male writers. Sartre, Eliot, Thomas, Cummings, Steinbeck…you name them and I’d bet there’s an image of them sitting around with a cigarette in hand.

Now, I’m not here to make grand statements about smoking, so let’s keep that in mind. I will, however, make this statement: It’s abundantly clear that male writers were using the cigarettes to appear as powerful badass types. Insert a female into the photo and the dynamic changes immediately. There is an extended conversation on gender misrepresentation and prejudice to be had.

Katie and I decided to pursue the idea that a female writer could be both powerful and funny in the same photo. That subject could also avoid the trappings of the negative stereotypes associated with female writers in a historically male dominated field.

After taking the normal headshot that Katie liked for her everyday usage, we moved to the concept image. Initially, we discussed including white gloves and a long cigarette holder, but it felt awkward.  There were too many moving parts, and those elements felt like a distraction from the original intent of this image. Instead, we tried the overcoat. The ripped cover and loose pages illustrate a disdain for the idea that any old idiot can learn how to write poetry by reading one book. We lit the pages on fire to drive the point home. Add the extra cigarettes and lipstick stains for a bit of absurdity, and Katie nailed a great expression to carry the image.

A BIT OF TECHINCAL INFORMATION

Here’s the run down on the technical side of things. First things first, we have a Mamiya RZ67 with a 140mm lens tethered into Capture One. As we were collaborating and discussing the progression of the image, having the ability to share each photo with Katie and discuss our ideas was important.

We had three lights set up for this image. The first is the key light, set high above Katie’s head and just to the right of the camera. The second light is a large gridded softbox, in line with her left shoulder and aimed at the background. Third is a large gridded softbox off her right shoulder, providing some fill. The camera was set at 1/250th of a second, f/16 and 100 ISO.  Key light set to f/16. The fill light is about 2 2/3 stops under the key. Background is around the same ratio, though there is obvious variation within the gradient it produced. We used gray Savage paper as the background. White balance was set with an X-Rite card.

A BIT ABOUT KATIE

Katie Schmid is a poet. Her writing has been published on The Rumpus and at Quarterly West, [PANK], Hobart, & Best New Poets 2009, among others. To read some of her work, go here: http://katieschmid.net/publications/. She lives in Nebraska, and on the internet at twitter.com/kt_schmid and http://girlcanon.tumblr.com.

Aaron is a photographer living in the Midwestern United States. 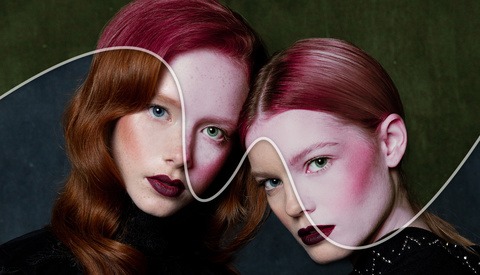