This exciting shoot came about when photographer Aaron Anderson was tasked to creating content for Elinchrom’s new ELB 500 TTL and Lifted Up Fitness’s web page, making it a multiple clients shoot.

Anderson was first approached by the athlete and they came up with the idea of two separate shoots, one with colored powder, and another shoot involving fire (You can see more of the fire shoot on Aaron’s website). He then contacted Elinchrom to see if it was something they would be interested in, and since they were just about to launch the ELB 500, it was great timing all around. 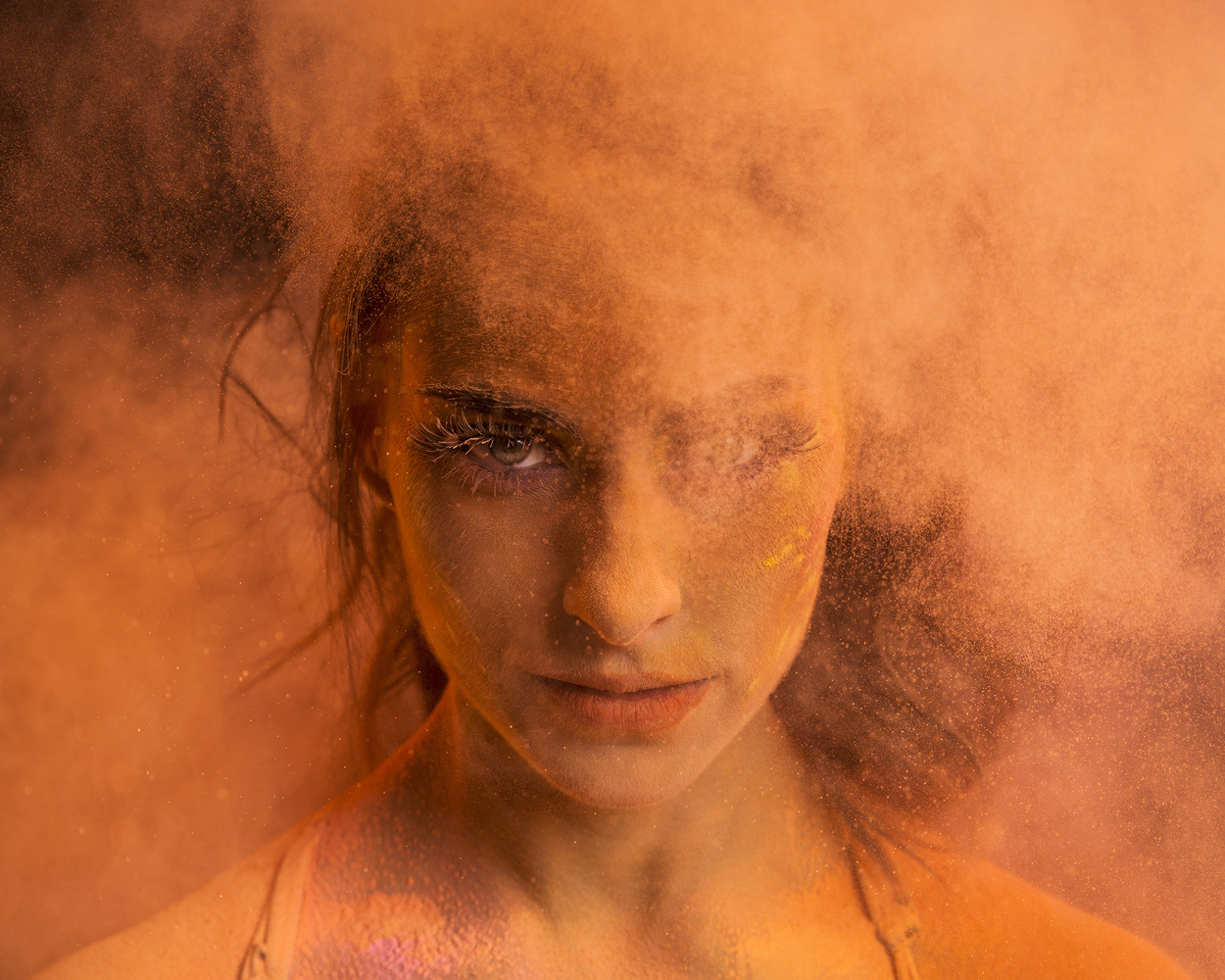 A lot of planning and collaboration went into the entire process of this shoot. It was shot in a studio and if you’ve ever used this powder before, you know what a crazy mess it makes. As research, he started talking to different photographers and producers who had the experience of shooting with powder in order to understand the challenges behind it. Learning from them, Anderson decided to use large plastic sheets to cover up the walls and all the gear so as to keep them as clean as possible. Rain gear was also used to cover his camera and his team all don painting suits so as to keep their clothes clean. 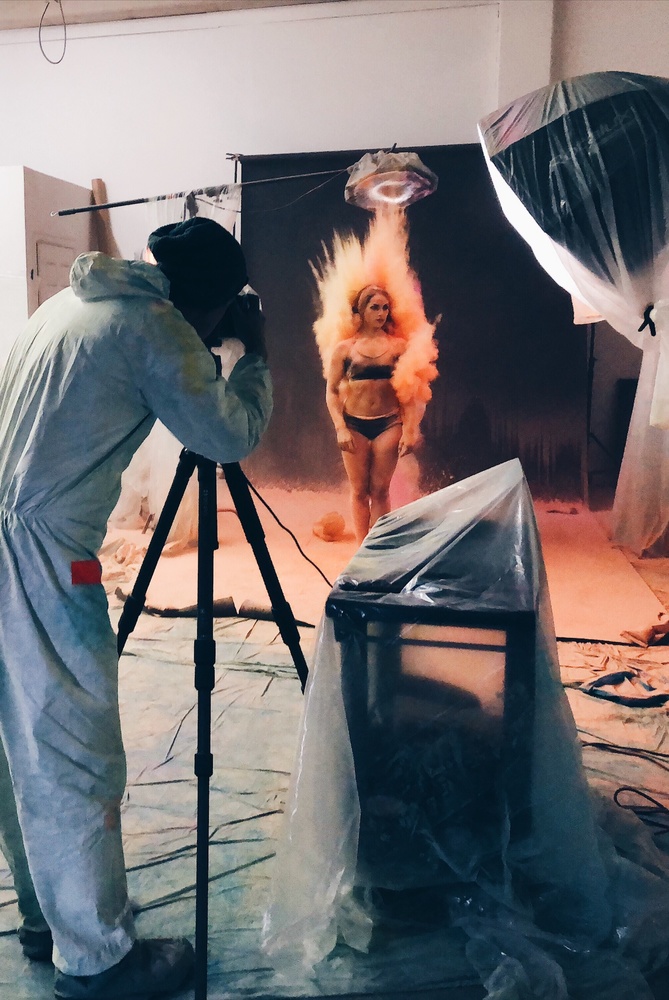 The photoshoot process was not a comfortable one for the talent and it was important to get a talent who was willing to push through. Luckily for Anderson, Elizabeth the talent was amazing. They had to put tissue in her ears to keep the dust out, but even with powder thrown on her she barely blinked. This allowed Anderson to capture some amazing movement in the powder. They were all blowing rainbows into Kleenex after the shoot which was pretty hilarious, but that’s what you do to make cool stuff! 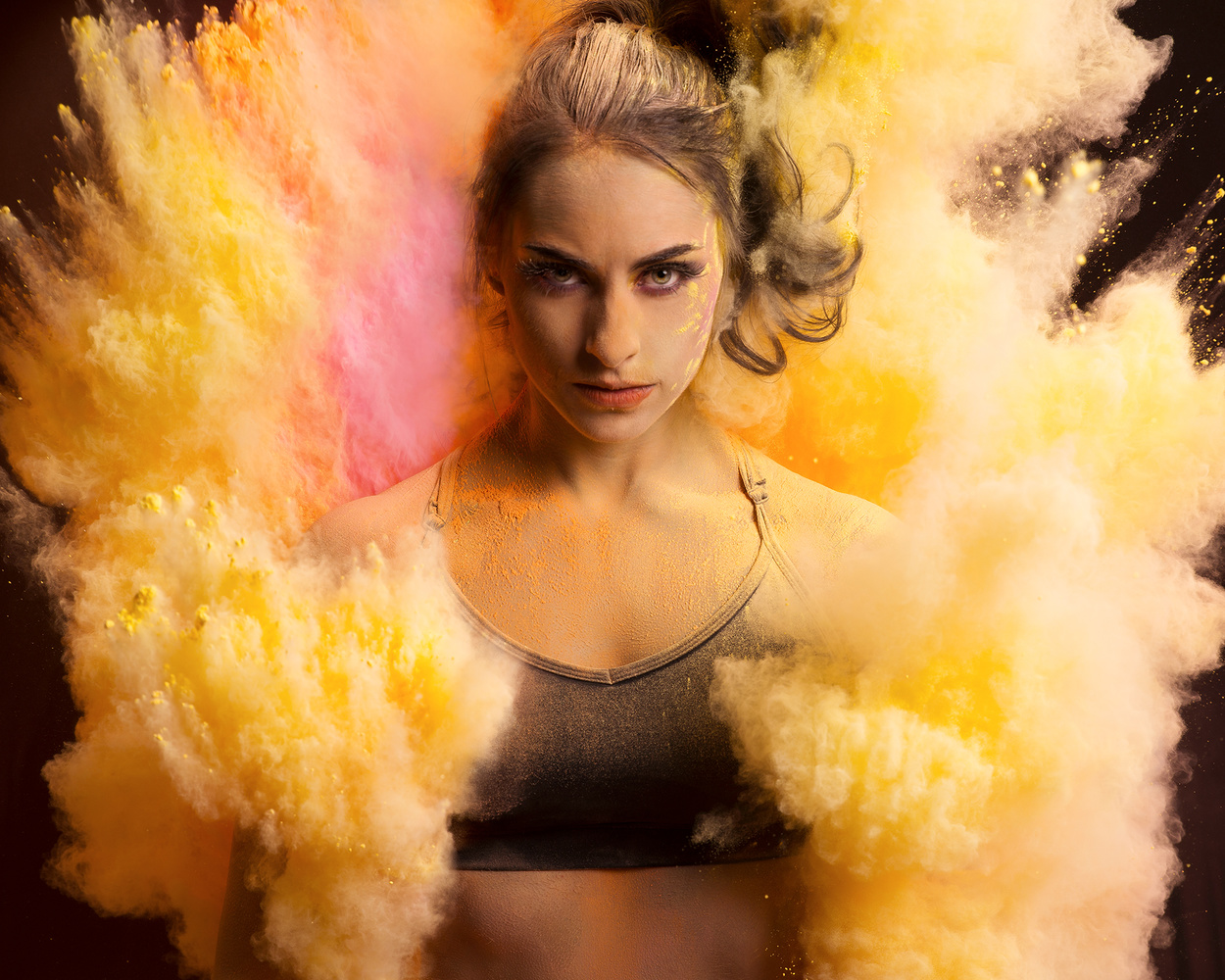 When asking Anderson what he expect going into this, he replied, “Going into this I wasn’t actually sure what to expect. I had worked with smoke grenades before, but never with powder, so I didn’t have anything to compare it to. I’m a huge believer in getting out of your comfort zone for a shoot, which means I usually feel a little nervous going into it, but that’s kind of the thrill... heading into the unknown with the hopes of creating something awesome. Of course they are calculated risks, I had planned this for months and been through multiple rounds of testing and gathering information, but there’s always that little doubt in the back of your mind.”

Anderson also mentions that challenges are always plentiful when you are shooting something you’ve never done before, especially since you can’t do a whole lot of accurate testing before hand. He had multiple lighting setups that he had tested without the powder, but on the actual day they had to make some big adjustments to compensate for the fact that when you throw the powder it will naturally block some of the light. There was also the challenge of freezing the powder, which they accomplished with the short flash duration of the ELB 500. They could have used HSS, but he needed a fast recycle time so he could get multiple frames out of one take so that naturally pushed him to use flash duration. According to Anderson, with the ELB 500 it has what’s called “action mode”, and even at mid power the flash duration is still around 1/2000th of a second which is more than fast enough! 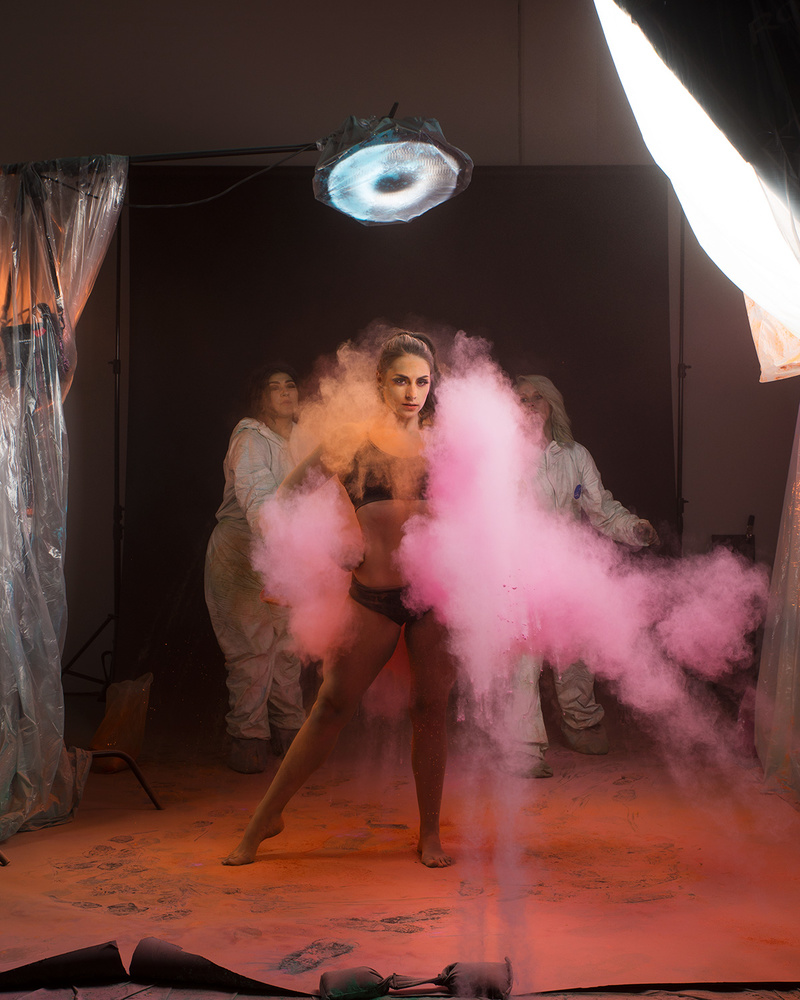 Overall the shoot was really smooth, and they all had a lot of fun. They are still cleaning up dust in the studio, and if he had to do it again, he thinks he would either rent a space or just shoot it outside! Anderson advises that if you do end up shooting with powder in your own space the more plastic you can get, the better. Also, that when you’re cleaning up try to avoid using brooms if you can, it tends to put it back up in the air. He also mentions that whenever you head into a shoot where you’re trying something new take the time to plan and test as much as the shoot will allow you to. Talking to people who have done something similar is always extremely helpful as well! 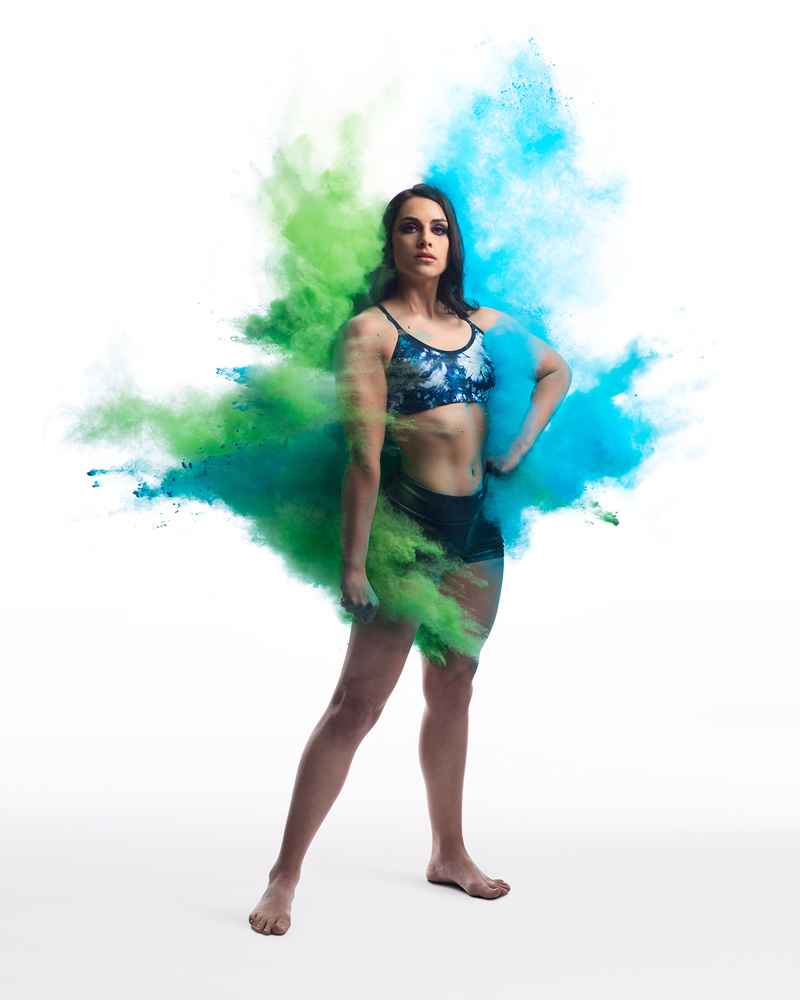 I used the ELB 500 TTL in Action Mode to utilize the super short flashe duration. I chose the Tamron 24-70mm because I could quickly change focal length without changing lenses (a bit of a problem with all the powder!)

SET UP FOR DARKER BACKGROUND: 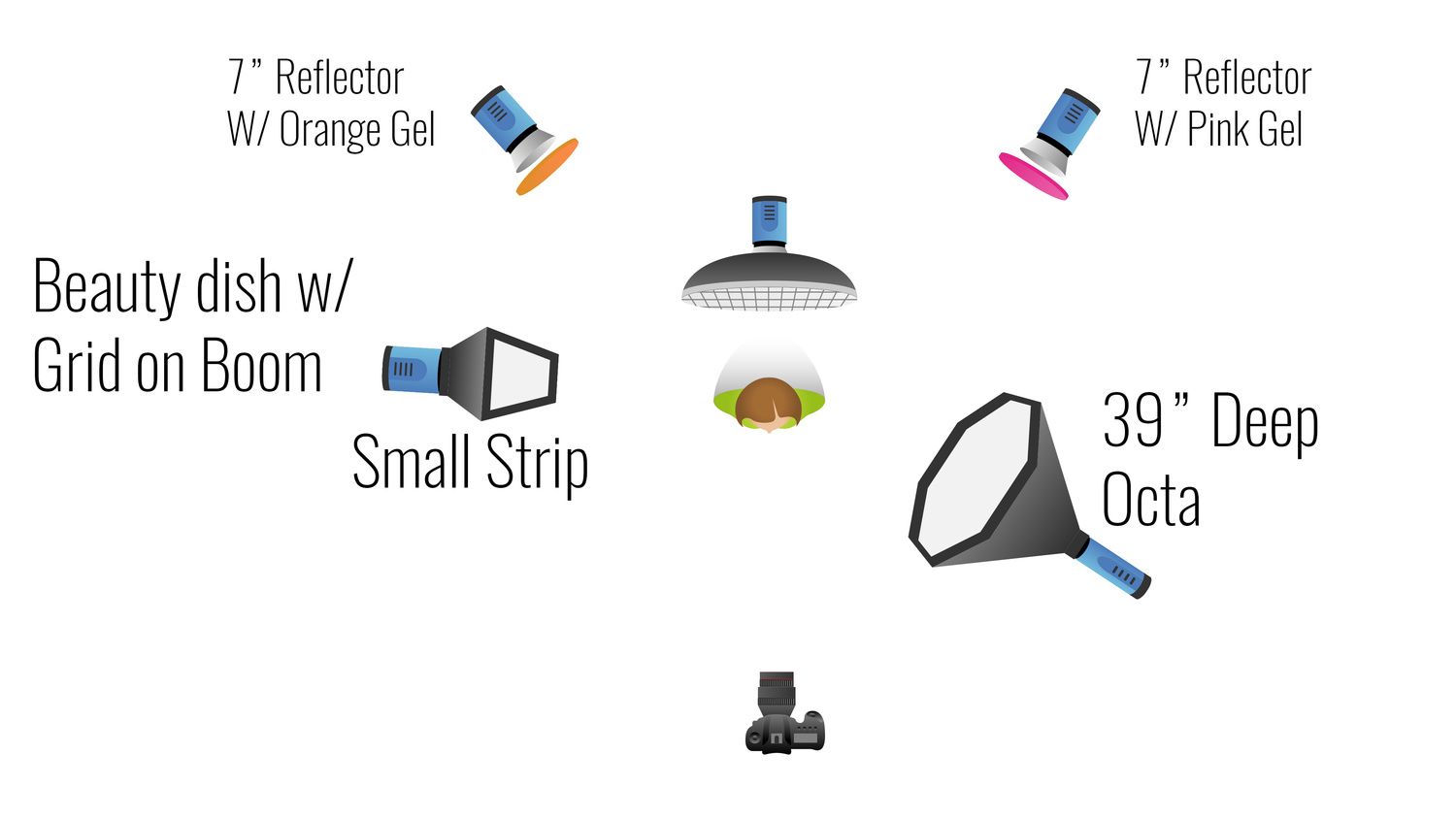 SET UP FOR WHITE BACKGROUND: 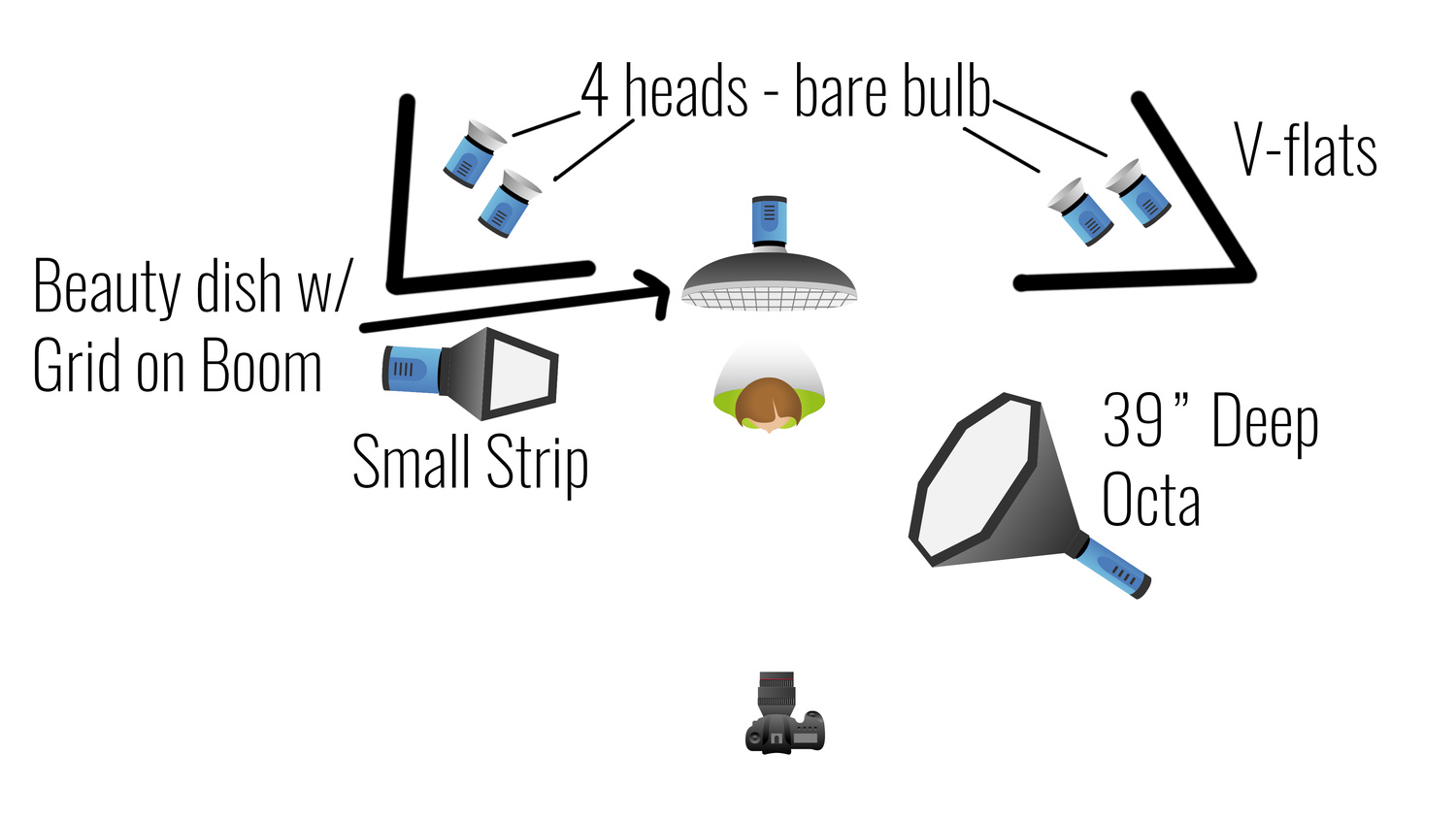 My main goal in photography, and in shoots like this one, is to change the term 'what if' to 'remember when'. It drives me crazy to hear people with big ideas saying things like 'wouldn’t it be cool if' or 'what if we did that', I want to encourage people to go out and DO IT! There are so many times where I sit down with a client or talent and we start to dream up something crazy, then a few months later we are doing the very crazy thing we talked about. It’s not even that the colored powder is an original concept, there are very few original concepts, it’s that I had never done it before. Hopefully this shoot can encourage you to do just that, to go out there and BE AWESOME! 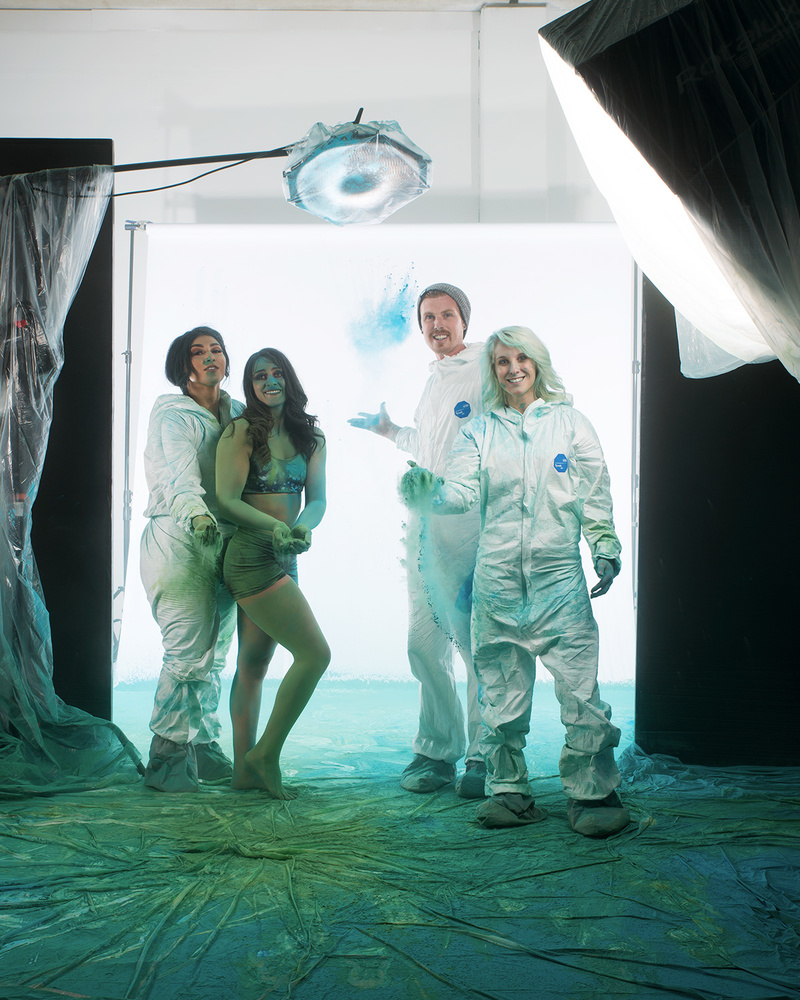 Behind the scenes video and stills captured by Storyteller Creative: www.storytellercc.com

Check out the BTS of the photoshoot here. Earlier half of the video is of another shoot.

All images used with permission of Aaron Anderson

Coloured powder shoots seem to be the thing right now.
I've seen a boat full of 'how I did it' articles on the matter.
The massive cleanup turns me off of trying ;)

I've never tried it myself either cause I too hate cleaning. Hahaha.
Still great information though, especially if a client requests something along those lines!

I've done quite a few of these Shoots with holi-powder. They are extremely fun for everyone involved and a great exercise for your finger to get the exact moment you want captured.
But I would heavily suggest going the extra 5 minutes and shooting the open eyes of the model separate and put them in later.
Given our "models" were a kids on a summer camp, safety was even more important but you really don't want this stuff in your eyes or even too much in your lungs (although it is mostly corn starch). Shooting outside is also a very good Idea for ventilation and cleaning purpose. The powder is biodegradable and goes away with the next rain.

Well, you've put me off of ever trying it now

Hi there Shavonne, Gong xi fa cai ...if you are celebrating the new year in. This session reminds me of Cold Play / Beyonce music video "Hymn for the weekend" filmed in India

By now everyone should know the dangers of talc powder inhalation so none of it should be used.

Dust explosions would be limited with the masses used for photography so only the model and photographer would be blown up.

Less known by lay people is the significant dangers of inhalation of corn starch and coloured powders. Many lung and airway conditions can be caused with various levels of nastiness. Please read this paper, and do some research before endangering yourselves:

I find the term "significant danger" a little dramatic, considering the high exposure (1h straight) in the study and the data returning mostly returning to normal in the post test after a few months.
Thank you for providing the study. It really shows, that you want to expose to these substances as little as possible and always check for intolerances and illnesses (asthma etc.). In a photoshoot we fortunately have control over most of these aspects, shooting in well-ventilated areas and trying to breath in as little as possible helps a great deal. There is a reason why most holi-events nowadays provide face-masks at the entrance.

By the way: You can get similar reactions with a high exposure to smoke especially when using cheap fluid or wrong temperatures.

It is fun, but the equipment cleaning is lifelong still finding traces of the stuff 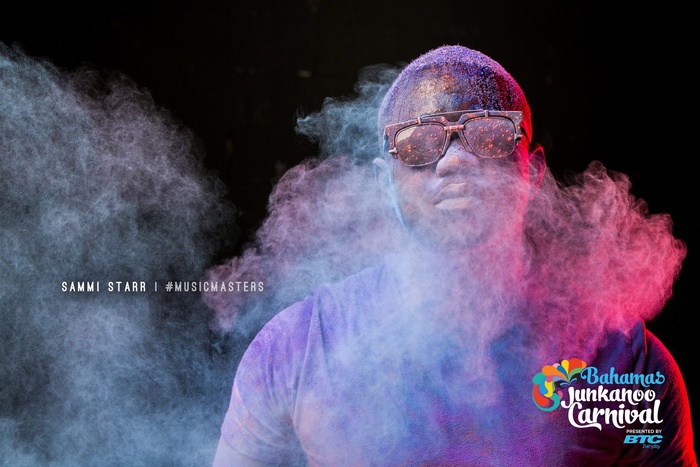