How I Shot and Edited This Self-Portrait

When stuck at home, a portrait shooter turns the lens back on themselves.

Anyone who knows me knows that I love a good self-portrait. It's how I got my start in photography and even now it's how I like to try new ideas and techniques before bringing anyone into the studio. This particular photo came to fruition at midnight thanks to a late-night burst of inspiration.

For this shoot I used my trust Fuji X-T3 and 56mm f/1.2 at f/8. For lighting I used a Cactus RF60x speed light in a large parabolic softbox, along with a large five-sided bounce. This is a very common gear setup for my portraits, just a single soft source of light — sometimes with a bounce. You can do a lot with just one light so that is often all I use. I used the Fujifilm Camera App on my phone to both preview my composition and trigger the camera.

The setup for this shoot was simple. I was sure to get the lighting where I wanted before I put paint on my face because I didn't want to cover my light in the stuff. I set up the soft box on camera right, extremely close to me and forward just a little. I pointed it almost at ninety degrees, with it just off axis enough to give a little bit of light on the background so it wasn't just black, I wanted to position the light so that I could get some Rembrandt lighting going on. I set up my bounce, also very close to me, just to keep the tiniest bit of detail in the shadows. Not a lot, but just enough it wasn't straight black.

I then applied the paint to my face, nothing fancy, and took a whole bunch of photos. I played with different apertures but I loved this one shot so much it was my easiest experience culling I've had in a long time.

First off, let's look at the before and after of the image's post production. I'm extremely proud of the color toning and post production of this image if I'm totally honest. It's just the right amount of warm in my opinion. 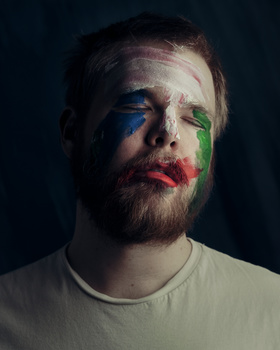 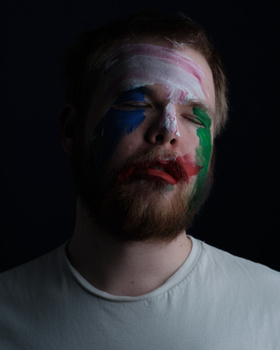 Post production on this portrait was simple. I opened the image in capture one and warmed it up, played around with some curves, and sharpened it using the "Soft Image Sharpening 2" preset, which is by far my favorite preset of all time. For the color toning I used a mix of curves, the color balance tool in Capture One, and the color temperature slider resulting in the image blow.

Just my Capture One edits

As you can see, it's a little too warm, flat, and lacking details in the background, So it was time to open up Photoshop and get to work!

In Photoshop, it was quite simple. I cleaned up the skin a little bit did some work in the curves panel to make the skin even warmer and the shadows even cooler, and then cleaned up a few pimples and skin inconsistencies that jumped out at me. Next I did some dodging and burning before cutting myself out of the background and putting some texture there.

The way I add texture to my backdrops in studio portraits is simple. I download free textures from around the internet, and apply it to the background with the screen blend mode, I remove all of the saturation, adjust the opacity to taste, and voila! A beautiful textured background with minimal effort! I also often blur it a little bit to help give the illusion of depth/bokeh. Lastly I created a circular gradient from white to black and used the overlay blend mode to give a very subtle spotlight effect on the backdrop. I saved this back into capture one where I cropped it, did a little bit mre sharpening, and began some color selections.

I found that the skin was too saturated, and the red paint wasn't saturated enough so I used the color editor tool to select my skin tone and desaturate it a little, followed by the red paint and saturated it a little more, giving me a nice balanced image.

As you can see, it is very easy to create a unique and eye-catching self portrait without a lot of gear. Just a simple lens, a speed light, and something eye-catching to really make the photo stand out. Have you ever done a self-portrait? I'd love to see them in the comments below!

Portraits / September 6, 2019
How I Shot This Self Portrait With Natural Light

/ April 10, 2020
While You Are Isolating, Why Not Use This Time to Practice Self-Portraits?

Liked reading the thought process behind the edit. Presenting how the final image came from a series of choices rather than steps to reach a predetermined look was helpful.

Sidenote, that lighting setup picture is the WORST I've ever seen.

But seriously David J. Fulde. The lighting setup image is upside down.

Not on my computer

Sorry, no intention to offend. Just observation: what is the meaning of this "portrait"? It looks like the person is sleeping, depressed, wounded, and drunk - all at the same time. I do not see any aesthetics in this photo, and the lighting looks like the photographer did not care about the lighting at all. If I may suggest, - if you live with your family, consider paying attention to them by creating their portraits; it would help them to cope with stress and keep their spirit up.

Thank you for the correction. You are probably the only human being who never makes a typing mistake:) Have a great day.

No, you were being pedantic telling the original poster what else he should have done with his time. Then you used a word in an incorrect context.

I should have told you to attempt to expand your ability of finding value in images that aren’t aesthetically pleasing, but I went with calling out your vocabulary.

A person who you do not know, created an image, then took the time to share how it was accomplished on a forum dedicated to this exact thing.

You came to this site for this specific content.

You clicked on this article. And then you took the time to tell the op that you think he “did it wrong” and added further insult by telling him what he should do instead.

Either stop being a condescending dick on the internet, or be better at it. Don’t pull words out of a thesaurus, jam them into random sentences, and pretend it makes you look like you deserve an opinion. If you don’t like it, move on.

You should work either as a judge or as a teacher:) Your reply is incredibly rude and aggressive, which was not necessary. Looks like you have nothing to do during the lockdown, and just looking for a fight. I am sorry to see people losing their mind and not being able to control their emotions during the lockdown. I hope you stay well and learn to control your emotions. You are a man after all whoc should be able to cope with stress or learn how to do it. Whether you are a person who lost his mind during the lockdown and is no longer able to control his emotions or a psychopath is not for me to decide, I am not a doctor. All the best. Stay well. Stay kind (or learn to be).

I saw this and thought why? It’s not compelling in any way or form. Yan has it right, spend time with the family.

I finally made my bi-yearly self portrait a few days ago. Two 24" soft boxes and the bare plywood wall of my studio (too lazy to paint it). Shot at 70mm'ish with Sizony Alpha 7RIII. Useful critique is always welcomed but forgo the "he ugly" comments...we all know. 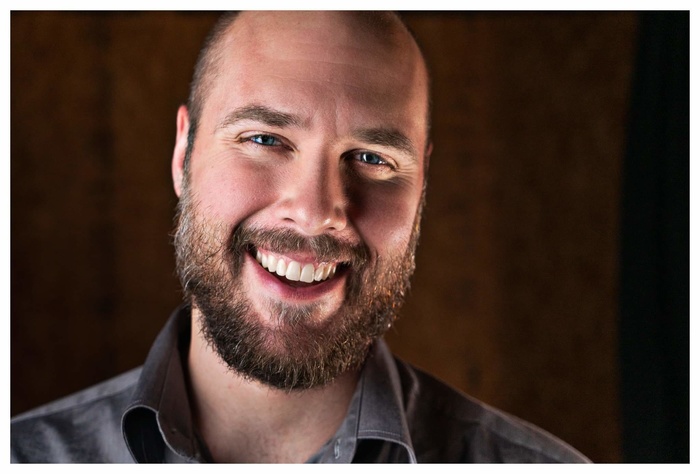 I think you did a great job with the lighting. The smile looks natural, and the background has a little bit of detail to keep it interesting but not distracting or flat.

I found I need a better background D but here's my most recent self portrait. This was only adjusted in lightroom. I've never used PS or capture one. Sony A7III with the Sony 85mm f/1.8 at f/4, 1/50s, ISO 400. I used one speed light and a wall as a bounce. 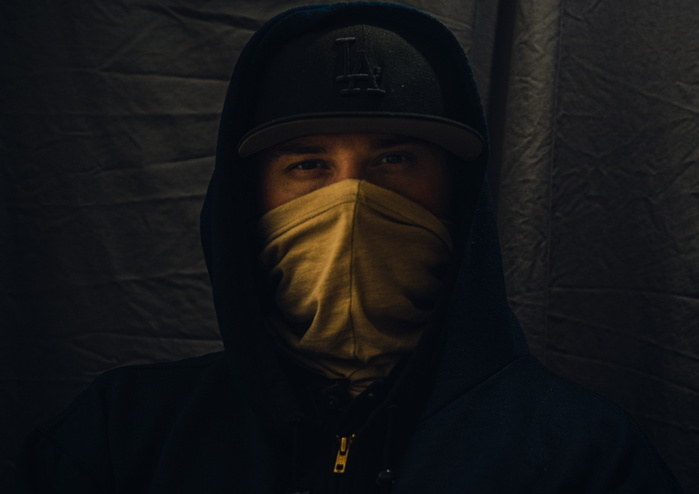 A picture speaks a thousand words, in this case only one....crap.

I love this. I can feel the lockdown!
(Gotta love how all those trolling your work don't have a portfolio. Classic. 😂)

Thank you for your comment. I hope you know the difference between "trolling" and "expressing opinion". My profile has my real name, and you are more than welcome to Google "Yan Pekar photography" if you are so keen to see portfolio. It helps to do research first before jumping to make assumptions. All the best.

I think Chase's comment above sums up the typical reaction to your words. Your comment came across as trolling because it was not constructive and was deliberately condescending, both in its tone and in its advice. Of course, you're welcome to your opinion but the way that you expressed it was obnoxious and unwelcome.

People should be free to express freely what they want to say. I honestly say what I think. If you feel that my advice to pay attention to your families and parents who are more vulnerable during Covid is "not appropriate" in tone - please think again. There is a wave of photographers who jumped to taking selfies and self portraits instead of supporting their families and paying attention to more vulnerable. Stay safe.

You're more than welcome to say what you think. Just expect to get called out when your opinion is conveyed in a weirdly condescending manner that is completely unnecessary.

It's up to me to decide what I want to say. I do not (no one does) need your permission to say what I think. If you make a decision to call someone out, just expect to be told to back off. I choose to be sincere and honest with myself and others. In this case, if the image is a crap, it is a crap, whether you like my opinion or not. All the best. Take care.

Of course it is up to you to decide what you say. You absolutely do not need my permission or that of anyone else. I'm completely fine with being told to back off. You can think whatever you like about the image and you are completely entitled to your opinion. On all of these matters, we are in complete agreement.

None of this takes away from the fact that the way you put it across was condescending and unnecessary.

See if any of this resonates with you: https://youtu.be/y0NqjKoqHjs?t=539

Andy, I do not have time nor desire to argue. All of us have enough stress with lockdown, and now is the time to help each other rather than looking for a fight. No one is perfect and I cannot please everyone. I choose to express myself the way I want to express it. Honestly and straightforward. Have a great day and stay well. All the best.

Im not the best at self portraits but, I tried giving it ago. Inspiration was new found sympathy for the life of a house cat. Thanks covid19. 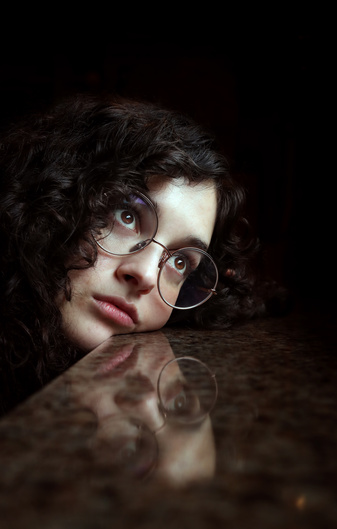 I shot these self-portraits last week. 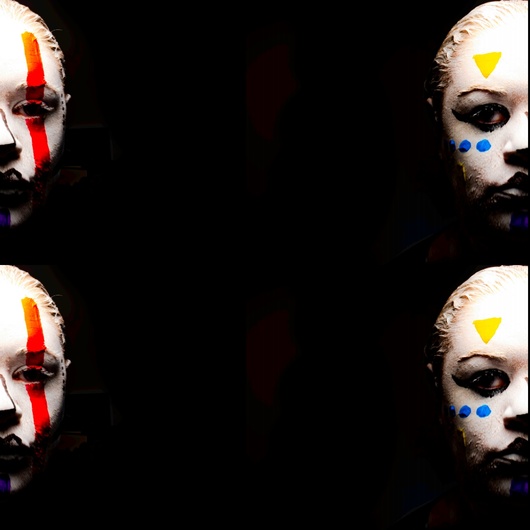 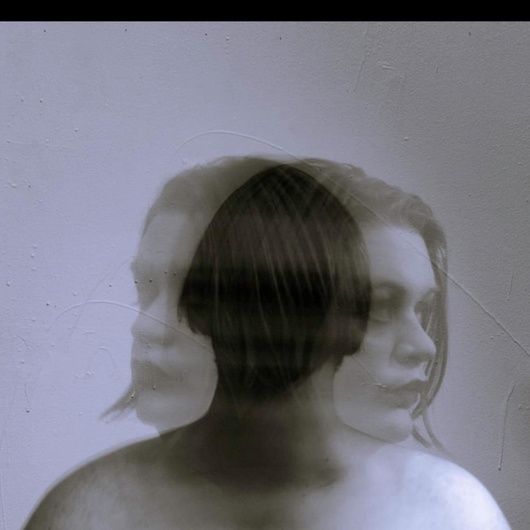 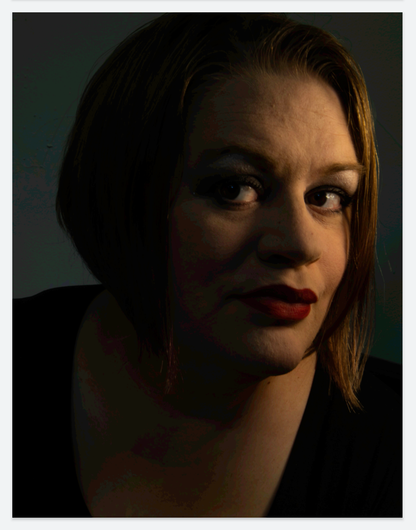