How I Simulated Natural Light in This Fashion Shoot

Have you ever wanted to create a bright, sunny image, but it was rainy and overcast outside? In this article, see how I recreated the sun when I shot this edgy fashion editorial in my small home living room.

Whenever I flip through fashion magazines, I'm always inspired by images that strike a balance between showing a lot of movement and a control of light. My goal was to combine both of those concepts. So, I went with an edgy outfit and simulated a sunny day outdoors. To accomplish this look, I had to make the most of the space I had, which was a messy living room in my house.

Since I was lighting all the shots with a continuous light source, my camera settings rarely changed and remained consistent throughout. My choice of camera and lens were the Canon 5D Mark III and Sigma 35mm f/1.4, because I wanted to be able to move around my subject and change angles without worrying about focusing or distortion. Using this lens helped reflect the edgy style of the shoot. Additionally, when using the 35mm lens, it also helped make the space I was in and the set I built appear bigger than it actually was.

The camera settings I chose for this series were primarily based around the feeling I wanted to convey, which was a lot of movement and texture from my backdrops to contrast the smooth fabric of the models’ outfit. I started by bringing down my aperture to a deep f/8 aperture to achieve a more gritty and dramatic look, where everything was in focus. The other consideration I had was that I wanted to capture a sense of movement in my shots, and since I was using continuous lights, I wasn't able to freeze the action with my strobes. Given my lighting, I had to make sure that my shutter speed was high enough to freeze the model when she was in action. This brought my shutter speed to 1/500 s. To eliminate camera shake, I also shot on a tripod. Lastly, in order to compensate for the loss of light from the high shutter speed and deep aperture and still keep my ambient light bright enough where it looked like a sunny day, I had to raise my ISO to 1,000.

As you might be able to see, I chose to go with a continuous lighting setup, because what you see is what you get. This saved me a lot of time and allowed me to focus on the subject. It also provided me with consistent results across all the images. 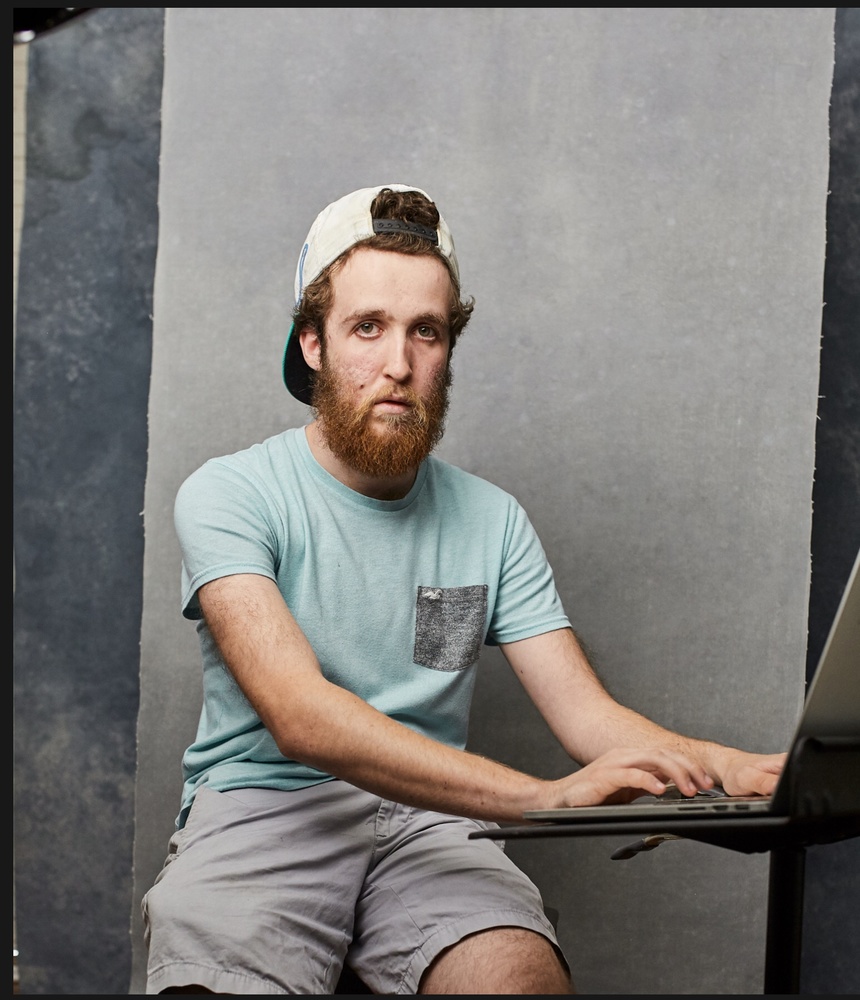 This is the first light test of the shoot. I wanted something punchy and contrasty, but with even shadows. By bouncing my 59-inch soft box at the eight-foot ceiling without the diffusion, it gave me the punchy light, but also a soft and even falloff.

For the first set of images, I aimed to have even light on the face and scene, like the light was coming from a window, but still have a hint of contrast. To accomplish this look, I placed a single Aputure 120d at full power into a Elinchrom 59'' Octabox  and raised it as far as it could go (which was roughly six feet) and pointed it at the ceiling. The light was placed in the middle of the scene, so it could output the most even spread of light possible. To bring a touch of drama back into the scene, I placed a five-foot black flag to the subject's right to control the density of the shadows. 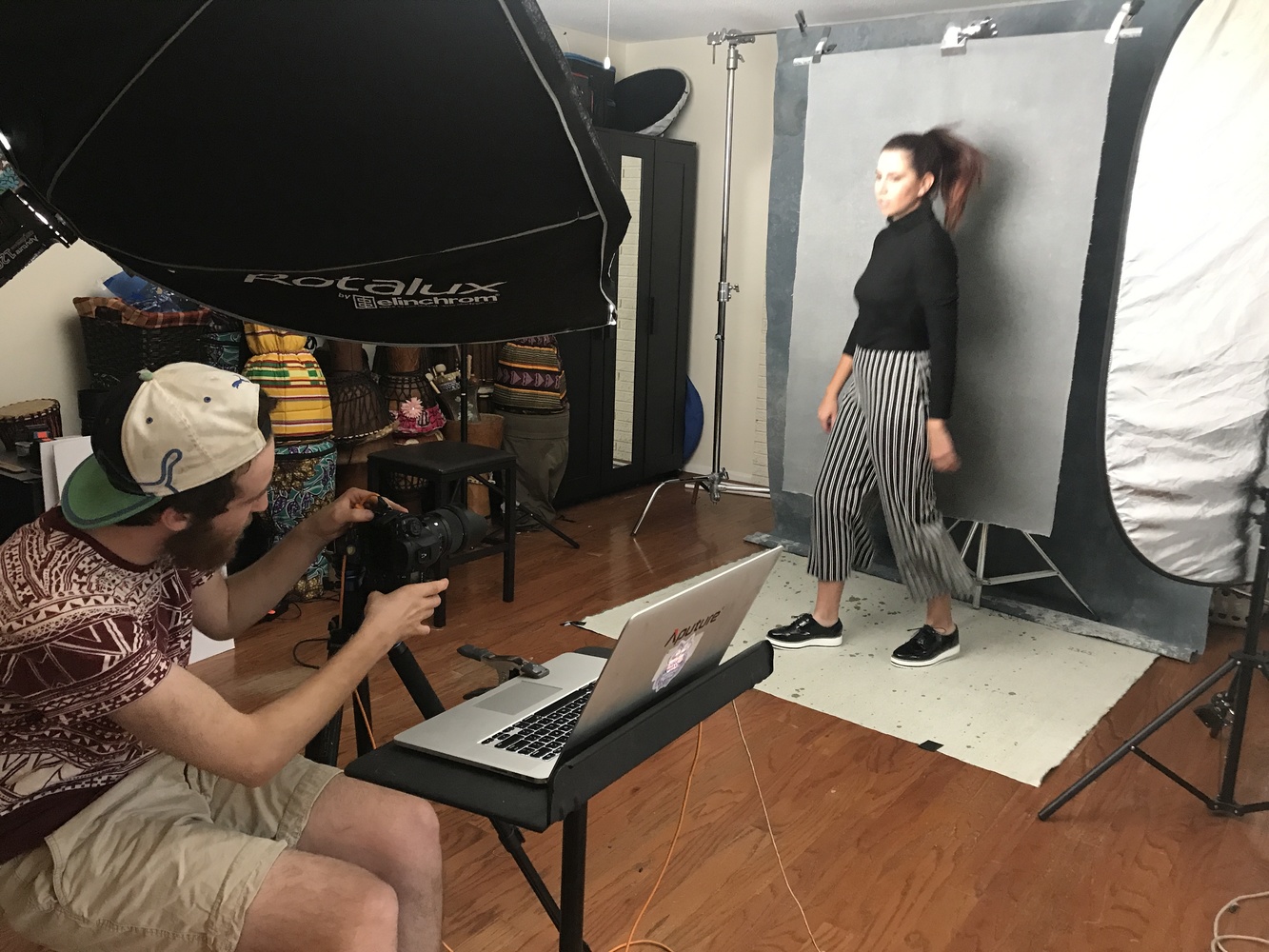 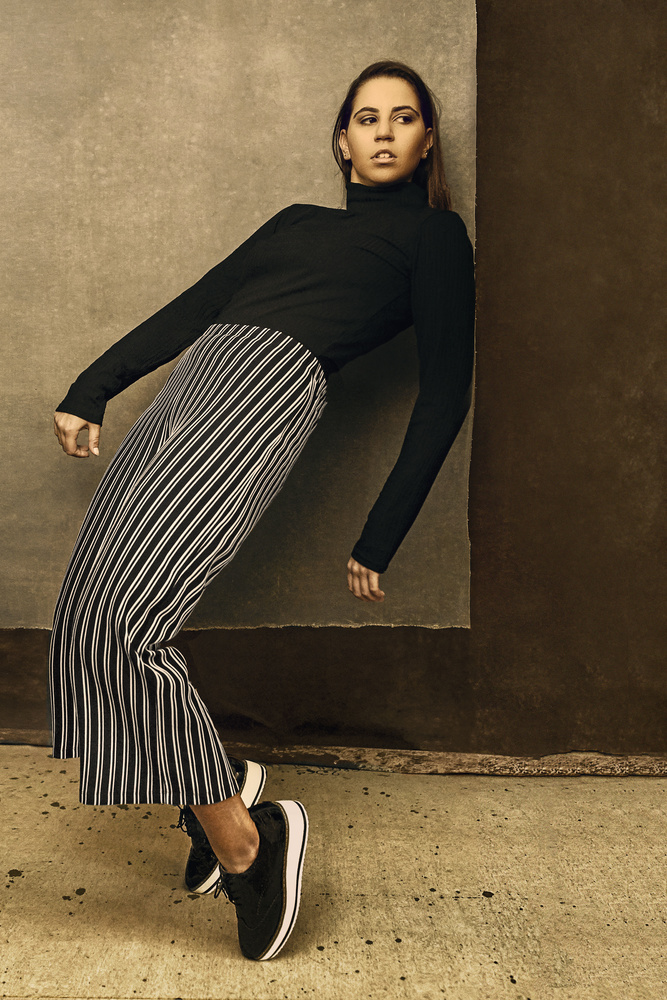 When I think of the kind of light that the sun outputs, I think of one small, undiffused light source. In order to replicate the kind of light that comes from the sun, the first thing I thought about was the direction of light and its shadows. For this setup, I kept both diffusion panels off of my soft box and placed the soft box two feet off the ground, angling it down at a 45-degree angle. I then placed the model inside the canopy of light that the six-foot soft box created, which gave me a gorgeous wraparound of light on the subject and created a perfectly even hard light. Since the light was placed a few feet above the model, it still created shadows on the model's face, so to soften the shadows subtly, I placed the backside of a Gravity backdrop on the floor (a white canvas), which bounced the light back onto the model. This provided me with a soft fill. For the light direction, I chose to place the light off to the right of the model to create a more realistic effect, as the sunlight is often casted at that angle. I kept it to one light in order that I wouldn't have conflicting second or third key shadows. 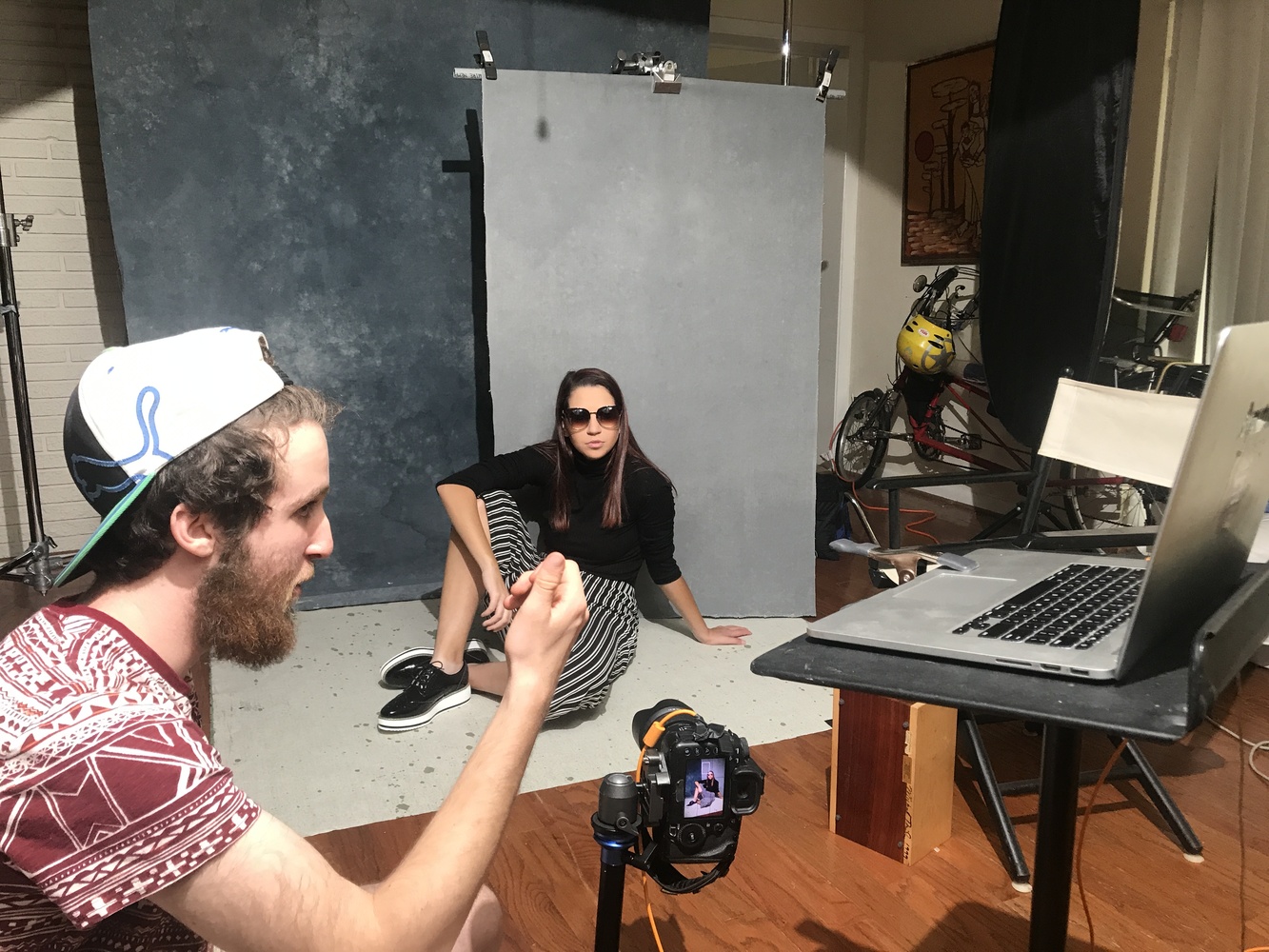 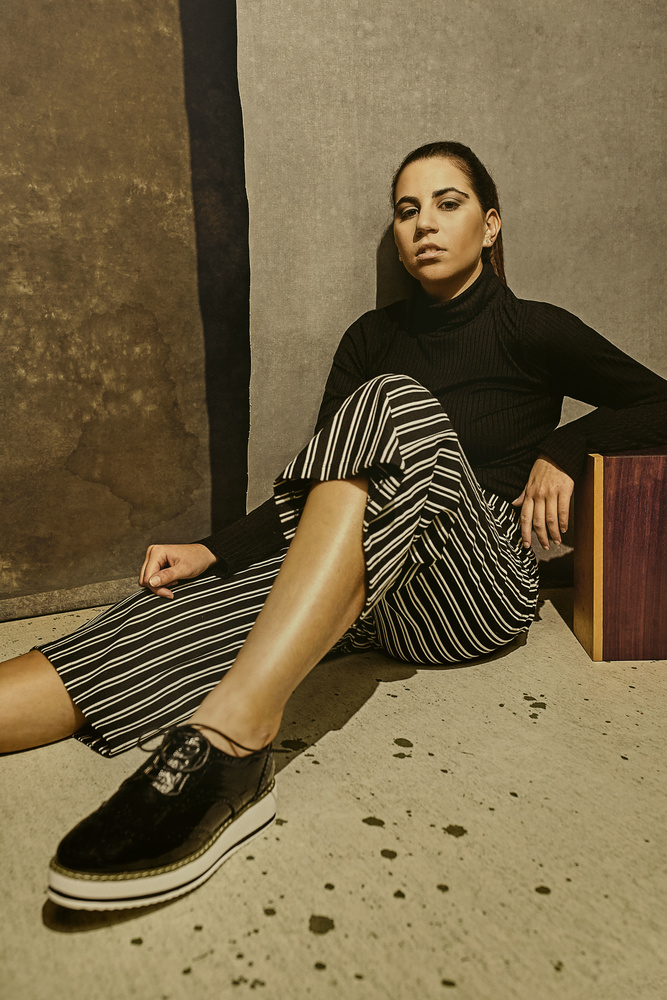 For the third look, I still wanted to remain consistent with the other ones, so I kept the light at the same angle as the first setup, which was the Aputure 120d placed in the center of the scene and a soft box pointed at the ceiling. But in this set, I wanted a softer fall-off and spread of light, as it was more of a classic headshot. I put back on the diffusion panels and placed a five-foot reflector to the model's right and a bounce card underneath. This provided the perfect amount of fill for the scene, but at the same time, allowed me to keep the same drama as the other shots. 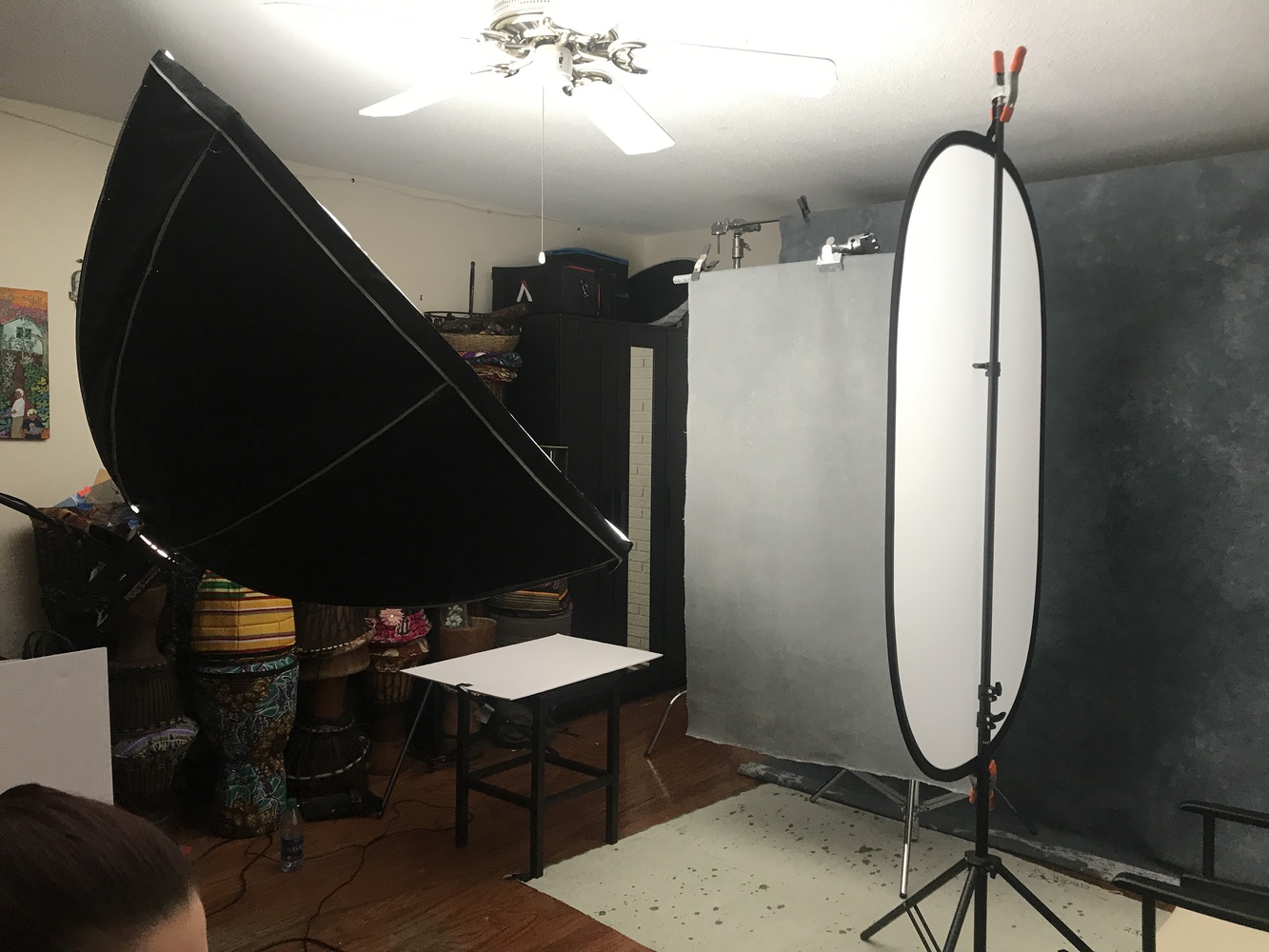 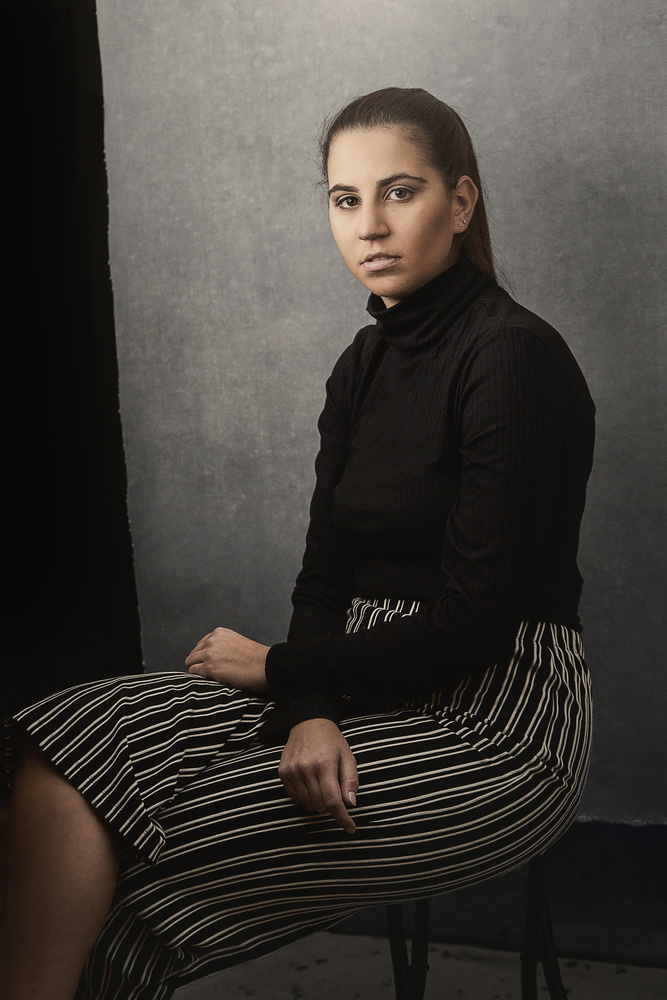 At the end of the day, this shoot would not be possible without the amazing effort that the crew put in. Do you have any pictures where you recreated the sun indoors? Feel free to share your pictures in the comments below!

I was thinking more of a shadows cooler highlights warmer style as opposed to global warm or cool. But it's up to you.

Well I think it looks great and I appreciate the tips, Eli. Thanks for sharing.