A Scottish photographer has become entangled in a bitter legal battle with The National Trust over “artistic nudes” he shot inside one of their castles.

Howard Kennedy insists the furor surrounding the nude shots he took of 25-year-old Rachelle Summers at the castle is now causing his business and professional reputation irreparable damage, whilst also claiming he had the correct permission to shoot the series.

The 15th-Century fortress known as Craigievar Castle is located in Aberdeenshire, Scotland, and is said to have been the inspiration behind Walt Disney’s Cinderella Castle. Following the shoot, Kennedy and his wife Karen offered the prints for sale worldwide. It wasn’t until four years later that the images came to the attention of Gabriel Forbes-Sempill - the daughter of Lord Sempill, who gifted the ancient monument to The National Trust in 1963.

Following the complaint, the Trust has denied granting Kennedy permission to shoot the series of photos. Their statement included the notion that they “would never sanction photographs of this nature, especially at a location that is regularly visited by families with children." They insist there’s no evidence to suggest permission was granted for a photographer to shoot nude images at the venue. That may be due to the fact - by Kennedy’s own claims – the shoot was arranged on the back of an oral agreement. Kennedy is adamant he acted correctly to the best of his knowledge and even paid £200 in rental costs for the space, but has no paperwork or emails to back it up. He is now suing the Trust for £50,000 ($66,600) in libel damages after his business allegedly nosedived.

The barrister’s statement on the case reads:

The present action concerns the circumstances surrounding Mr Kennedy's attendance at one of the National Trust for Scotland's properties, Craigievar Castle, in Aberdeenshire, on 23 February 2012, where he took a series of nude photographs of a model for commercial purposes.

Mr Kennedy's case is that he entered into an oral contract with NTS photo librarian, John Sinclair, on 21 February 2012, for the express purpose of shooting nude photographs of this nature.

He further contends that NTS staff were fully aware of the specific nature of the photoshoot at the time, including via the oversight of at least one female member of staff, who is said to have supervised the photoshoot throughout, either in person or by way of CCTV.

The National Trust for Scotland disputes this factual case.

The case is scheduled for a later date.

Hey Fstoppers - you have a picture of the immediately-recognizable Neuschwanstein Castle in Bavaria (as in Germany) as your lead photo. From the details in the article it sounds like this happened in Scotland, not Germany, but Neuschwanstein does get credited as being the inspiration for the Cinderella Castle all the time...

Eagle eye! Well spotted. This was intentional though - it's a copyright issue; we don't have any rights to images of Craigievar Castle at the moment.

build a lego castle then ?

There is a CC BY SA image in Wikimedia.
Edit: several images

Weak. I should think that a website dedicated to the hobby and profession of photography could take the extra 60 seconds to uphold some degree of integrity in their visual storytelling.

I thought that was the weirdest unScottish castle ever seen. No wonder, it was German.

Another interesting thing, I was told while visiting Neuschwanstein Castle a few weeks ago that it was in fact the inspiration behind Walt Disney's castle. Which is correct?

For all those wondering what the row is all about, here is the photograph, and the castle used: 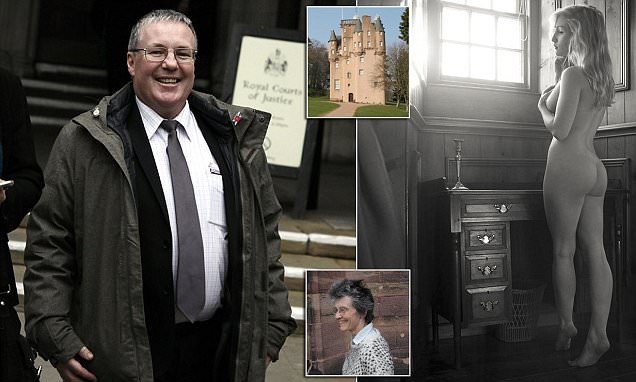 Any pro photographer that does commercial work and nudes has to know that there may be some criticism and backlash. When you shoot inside a tourist destination, you would have to be a complete moron to think there will never be a problem. While he got away with it for several years, suing for libel now is an idiot move.

And just like that, it became more difficult to photograph National Trust properties. Thanks photographer who "had" to shoot nudes.

I know it's cost friends work, and they used have to have no issue doing video and other photo projects on their sites. He has to fill out paperwork for every project such a full shoot brief with kit breakdown, market and usage agreements. Something he never had to do before.

Add into the fact NTS/HS have never allowed any project that can bring the 'brand' or owner into disrepute.

I'm no lawyer by any stretch. But, oral agreements? No receipts? Now, one has to wonder how he was able to shoot in that space and have no one question him. Especially with a nude model.

Why not just shoot backplates of the castle (or other restricted locations) and composite nudes into the images later? Problem solved and no legal actions need to be taken.

NTS/HS own the rights to their properties and they enforce it strictly, they've also had long standing policies against material that can bring them or the their properties into disrepute. Using an image of their property for commercial purposes is a big no, no and generally you have to sign a waiver if you are doing photographer (and they notice your gear). They have had legal battles over this in the past.

He's also suing them in England which is down to the fact the legal barristers are a no-win no fee company based in London and NTS are trying to field it in the Scottish legal jurisdiction which have some key differences. Howard is also a Scottish photographer from Aberdeen which makes it even more crazy.

The whole thing is a mess, and the fact he's got no documents just makes it all the more messier and f***** it all up for other photographers who wish to use NTS/HS properties (which was hard enough before this) and any other historical site.

Honestly,if this guy thought an "oral" agreement to shoot at a National Historic site such as this, shooting nudes at a tourist attraction, was sufficient...he's a bit clueless. If he paid some sort of fee to someone with no receipt and record of payment, he's clueless. If he has no records he has no leg to stand on.

Oh lordy , 'think of the children' rolled out again to justify their derision. Denials all around that anyone new anything.

There’s nothing wrong with “protecting the children.”