Having your images stolen and used against your will has all but become the norm for many working photographers. One gig photographer who confronted the record label editing and using her images, however, was greeted with insults as they told her she “doesn’t have the portfolio to back up [her] prices.”

Canadian photographer Adrienne Row-Smith was recently enlisted to photograph bands for Monkey Goose Magazine. All was well until she later discovered the images had been taken from the magazine’s website, without first having asked her permission. The record label not only stole the photos, but had edited them differently, removed her watermark, and had shared them across their website and social pages without credit.

I had reached out to the band first, asking them to politely remove it since they had violated my copyright by editing them. Whomever I was talking to was more than happy to remove the photos, which did not actually happen, and then proceeded to ask me how much I charge to get high-resolution copies for social media that they could use.

She says she quoted them $50 – a more than reasonable fee, I’m sure we’ll all agree – but never actually heard back from them afterward. The images remained live on the label and band’s official accounts, despite her request to remove them.

This is where things took a nasty turn. A text exchange shows an angry label rep calling Row-Smith “greedy” and “disrespectful,” while claiming the level of her portfolio means she has no right to demand $50 per photo. They also resorted to the classic exposure line, writing: “If you think charging bands to give you free publicity is going to get you anywhere, you have another thing coming.” 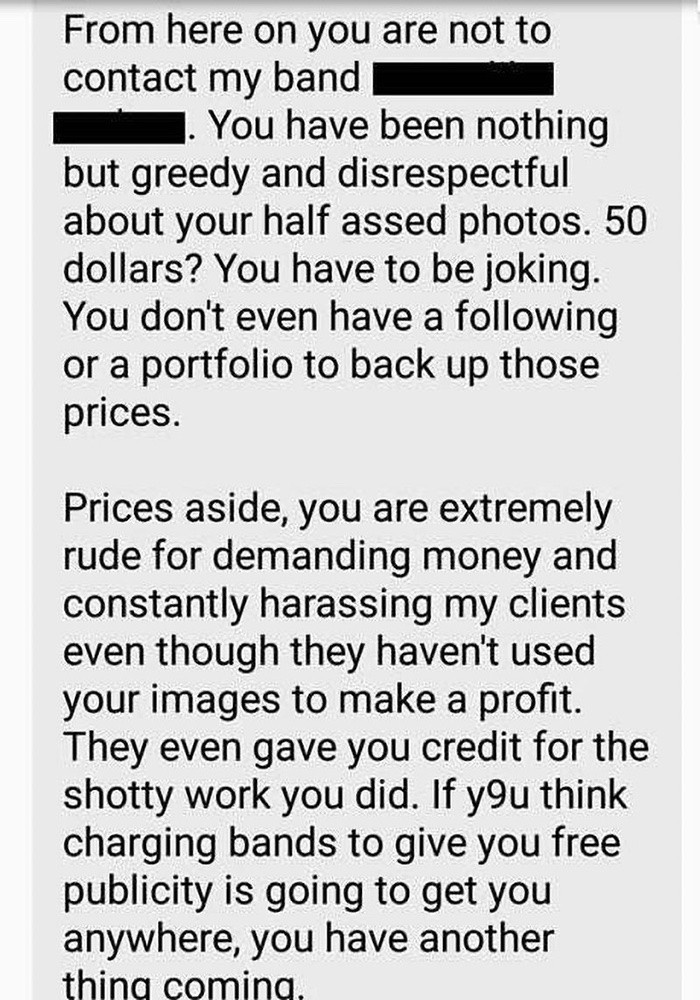 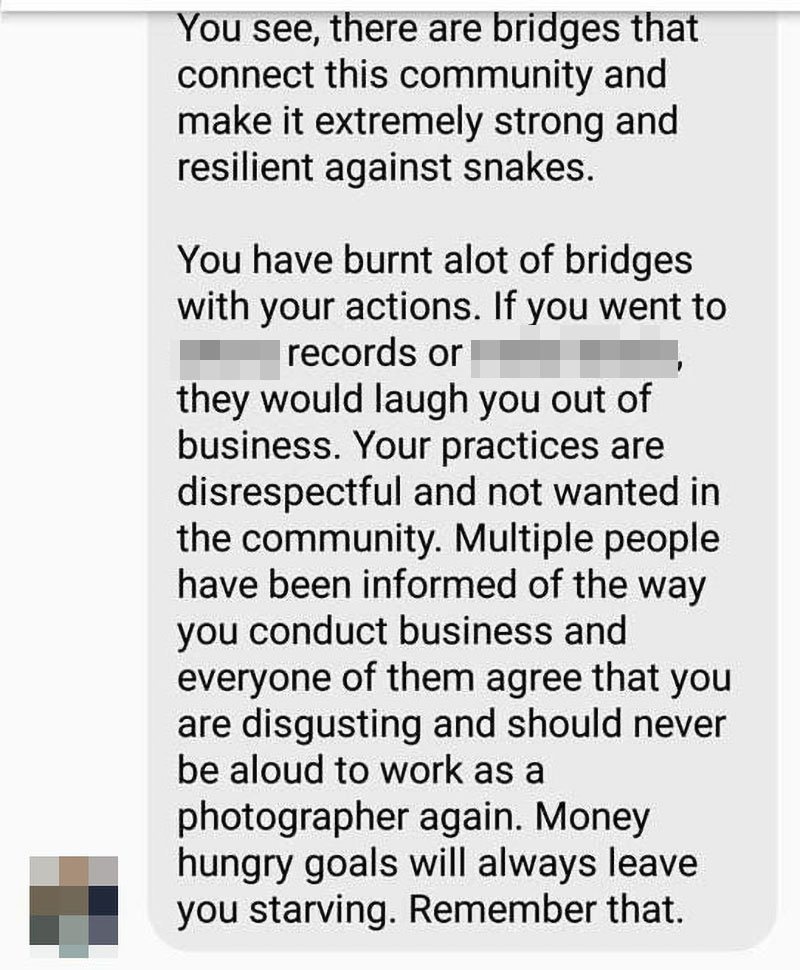 Although Row-Smith declined to name the record label in question, the ever-reliable Twitterverse has outed Heretic Records as the culprit – although they’ve since de-activated their entire social media presence.

Just to be clear, you're disagreeing with me over a single amount, and the fact that certain artists in certain situations can't afford that particular amount. That's fine!

But that doesn't change the fact that respect among artists is needed. If a photographer's going rate for a group photo is $200, have some respect for it. They might be super busy, or they might barely have any work. But they decided their time is worth $200, based on their skill level and the quality of the final product they deliver. (Also, based on their CODB and COL in their area. Here in Orange County CA, $200 is just a tenth of your rent, or worse!)

If a band can't afford that, yet, that's fine! If a photo is just for social media and they're still "starving artists", they can take group photos themselves on an iPhone, or find a photographer who is actually a personal friend or a huge fan of the band, who is willing to shot for less or for free.

But make no mistake, a /professional/ photo shoot could definitely help the band, in the long run, towards a record deal and free stuff. Saying otherwise is an insult to professional photography. So maybe they can't afford a $200 shoot right now, maybe their record label can't even come up with $50. That's fine. FOR NOW. But they should definitely be working towards that, and in the meantime they definitely shouldn't be shaming another artist who harmlessly asks for a few bucks. Don't blame the photographer for not knowing the record label has $0 to spare.

Quite bluntly, you have to MAKE money, save it, and re-invest it, if you want to make MORE money.

Maybe your record label doesn't have $50 to spare this year. (Maybe they spent it on a parking ticket!) But in the meantime, while you're waiting to "make it big" as a record label, or "get noticed" as a band, in hope that someday $200 is chump change, ...every starving artist needs to have full respect for other artists who have gotten even just one or two steps past 'starving', and has set their prices a little higher.

I don't think you disagree with the need for mutual respect, or the worth of an experienced, good quality photographer. I hope that you don't still think I'm misunderstanding the fact that some bands / labels simply don't have much cash to spare. I'm just saying, to the band label mostly but also the band: have some respect, and if you get caught doing something illegal, take that opportunity to LEARN some respect.

Simply put, I'd love to know all the facts too; I'd love to know exactly how much money was made (or lost) on this particular gig. And maybe you're right, maybe the band barely made enough money to pay for gas, and maybe the record label is barely breaking even, for now.

But I think we can all agree that nowhere in that scenario does a photographer deserve to get insulted and shamed for demanding a few bucks when the other party involved did something illegal, albeit harmlessly naive in their own eyes.

Maybe the photographer isn't as well-informed about how much $$$ is made at these types of gigs.

Maybe to the photographer, $50 is the gas money they ALSO desperately need to get to their next gig!

So let's just leave it at that- Both parties involved might not know just what stage of "starving artist" the other is at. Both photographer and band/label might desperately need $50 or $200, for gas or food. And with that in mind, there's no place for insults or shaming. Each should respect the hard work being done by the other, as well as the other's own perceived value.

Matthew, I think Adrienne knows exactly what kind of people she photographs. I took the time to look at her Instagram feed and she covers mostly local and regional metalcore/mathcore/deathcore bands. The only big name band I recognized in the photos I looked at was The Devil Wears Prada. I used to shoot these bands until I got tired of the music and the fans with their "hardcore dancing".

Where the disconnect starts is with people who respond to this story with their anger over what happened to the photographer without full knowledge of what transpired between her, the band(s) and the label.

So the best I can determine is that she shot one or more up and coming bands and something happened between her and the label and the label responded in a negative fashion.

Without knowing more about what went on and getting input from the band(s) involved, I quite frankly don't know what to think. Do I think her photos are worth $50? I don't know because I haven't seen them to decide for myself. I think someone should do some detective work and find out more about what happened. Also keep in mind this took place sometime last year!!!!

The guy writing these social media messages vibes manipulative psychopath - an extremely unskilled one, but still a creepy would-be manipulator.

See this type of action sicken me that a record company think they are entitled to having the images free or for beans. Man things have changed since the day of when a record company would ask you how much you quote then and receive a nice check with thanks. I would have said after you received the first note is to file a take down notice with DMCA and let them handle the situation. If the images were not down taken down then they would have gone to bat for you.