Three More Things Capture One Can Do That Lightroom Can't: Luma Curve, Sessions, and Process Recipes

This is the second in this series of posts highlighting some of the differentiators between Capture One and Lightroom. As with the first, if you’re reading this, the likelihood is that you are or were recently a Lightroom user and are curious about a better software solution with which to treat your images. "Better," of course, is somewhat subjective overall, but less so with specific features, and though that quest to find the best software is not necessarily an easy one, it is necessary. While you may change camera bodies, lenses, lights, locations, and styles, the one constant that touches all of your images is the software used to develop them. And though both are raw processors, Capture One and Lightroom are not the same in terms of feature set, general performance parameters, and approach - each with their particular strengths.

Capture One is multifaceted image processing and asset management software. As a raw processor, it is considered the gold standard, but without using it and experiencing the software some of its unique qualities can sometimes be less obvious to see, and comparative articles are often bathed in ambiguity to be suggestive rather than declarative — enough that it makes delivering unequivocal statements a near impossibility. Here, however, we’ll be direct and quickly highlight a few things Capture One has/can do that Lightroom doesn’t/cannot.

I highly recommend you click here for a 30-day full trial of Capture One Pro so you can follow along — seeing is believing, after all.

This is a big one, and one of those features that can hook someone on Capture One just because of it. It is true, later versions of Lightroom have a degree of control with Luminosity, but Capture One’s are vastly more developed, more akin to Luminosity blending mode in Photoshop, and Lightroom does not have Luma Curve at all. So what is it?

It’s a curve tool that appears as all curve tools you’ve seen before, but rather than adjusting the RGB values all together or by channel, the Luma Curve tool adjustments only affect the luminosity values. In a concise statement, Luma Curve allows you to precisely control tones separately from color.

This is significant because as you adjust the lightness and darkness values with curves or any other way, you are adjusting contrast, and contrast has a direct effect on hue and saturation. So as you use a standard Curve tool, you’ll be introducing shifts to the color and saturation, but with Luma Curve you’re only adjusting the contrast without changing color; so it's a matter of tones versus color.

There is, perhaps, no more obvious place to see this than when adjusting skin or color managed products, and so it’s common to find Capture One’s luminosity controls among the top favorite features of portrait, fashion, studio and wedding photographers who use Capture One. See the example below 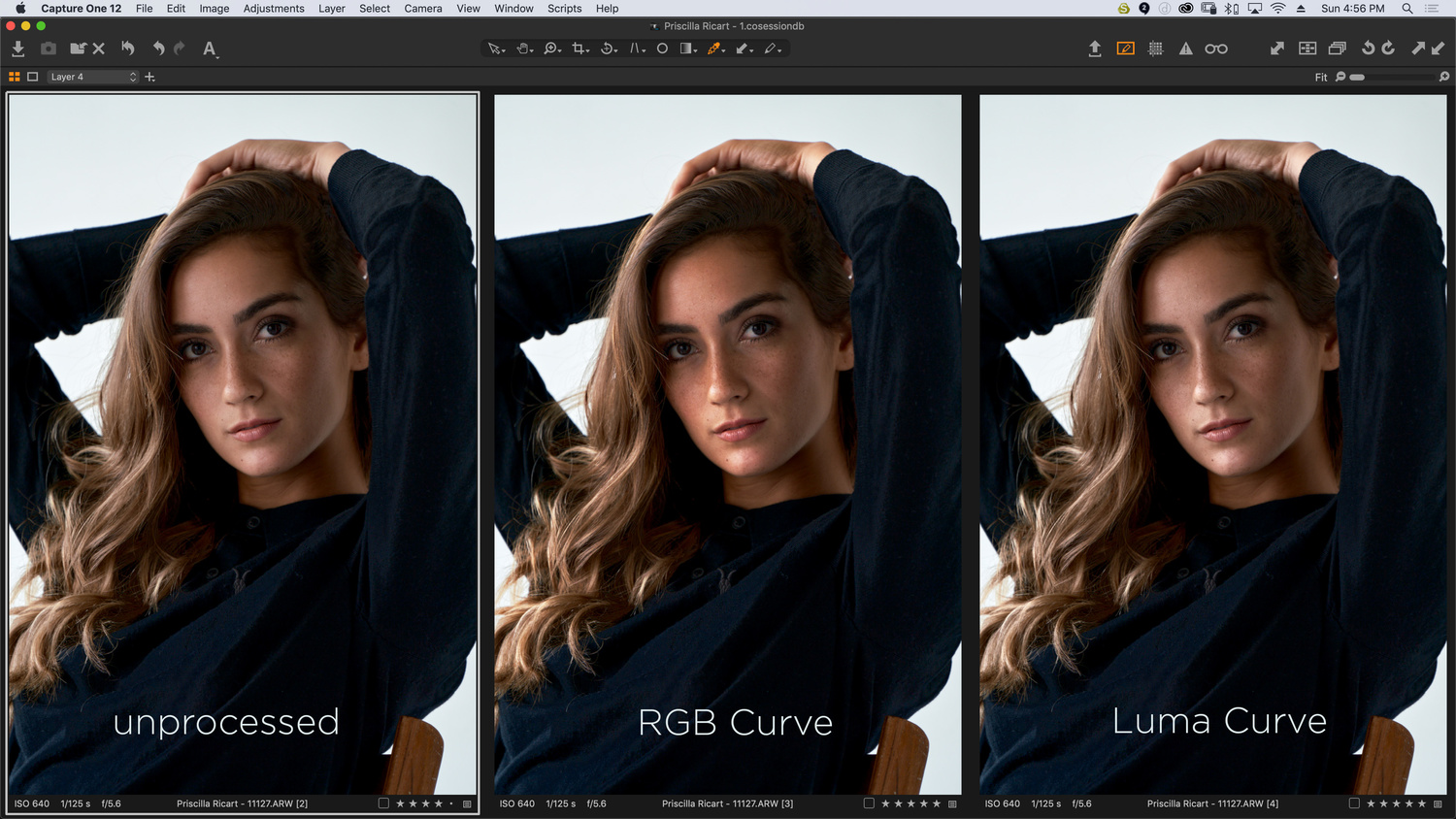 Both processed images have precisely the same curve values applied, but one is using the RGB curve and the other the Luma Curve. As you can see, there is a significant difference in both hue and saturation with the RGB Curve, and correcting that takes time and effort.

Capture One’s export options are incredibly vast, and it can be the source of some intimidation at first, but the benefit of having all those options is that there is so much that can be done with it. One such thing is its ability to export with multiple "Process Recipes."

For Lightroom users, it’s best to think of Process Recipes as Lightroom’s export presets, except with Capture One you can export multiple versions of your images simultaneously, and use metadata to generate subfolders. Here’s an example of how this would look in practice:
Once ready to export an image, you can set it to export a full PSD or TIFF file to store in your back-ups, as well as a reduced JPEG with metadata and watermark for publishing, and a version that is perfectly scaled for Instagram all at once.

You can also set parameters for specific metadata – like camera model/body, lens model, keywords, subject – so that upon exporting Capture One will create sub-folders for each or all. If you like to keep organized and save time, this is a huge help. Click image below to enlarge and see the Process Recipes panel on the left. 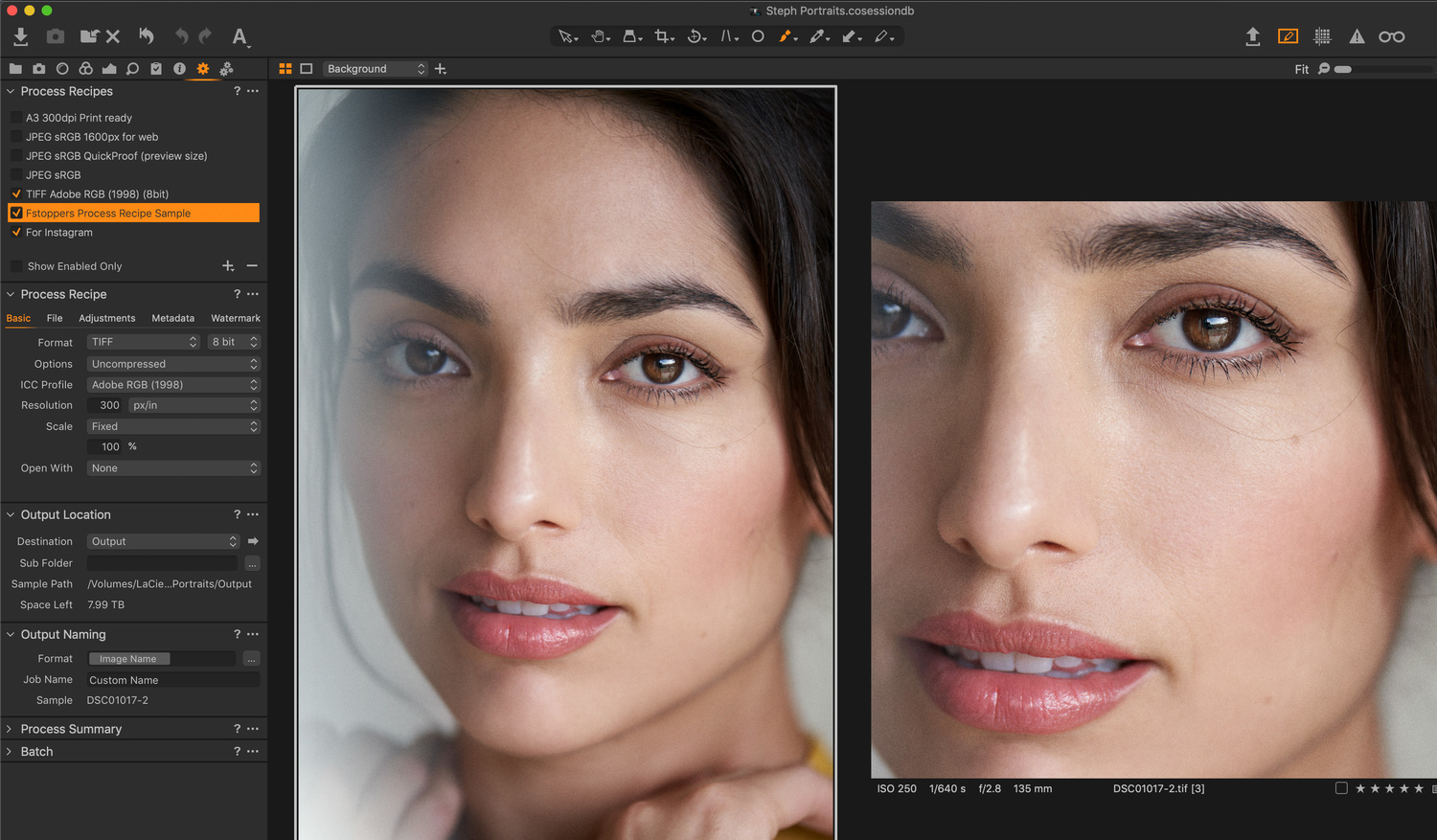 Most basic introductions to Capture One will list the significant differentiator between C1 and Lightroom by highlighting the interface and Sessions versus Catalogs, and for good reason. Think of them in terms of use-case scenarios wherein Lightroom you typically will use a Catalog for all your images, and Sessions are typically for a particular individual photo session. For example, maybe you have a catalog set up to cover an entire calendar year of weddings, a Session would be used to keep all the assets of one wedding in their own separate, safe, and organized world.

Sessions have been the default method of organizing since the start of C1 and remain the go-to workflow used by nearly all pro production, studio and commissioned photographers, and are a completely different way of organizing and managing images than catalogs.

*Though if you want to go the catalog route as in Lightroom you can, of course, do that with Capture One also, and anyone who was told Capture One doesn’t work with catalogs hasn’t used it since Version 6, and we’re on 12 right now. Also, you can import sessions into C1 catalogs for hybrid workflows. 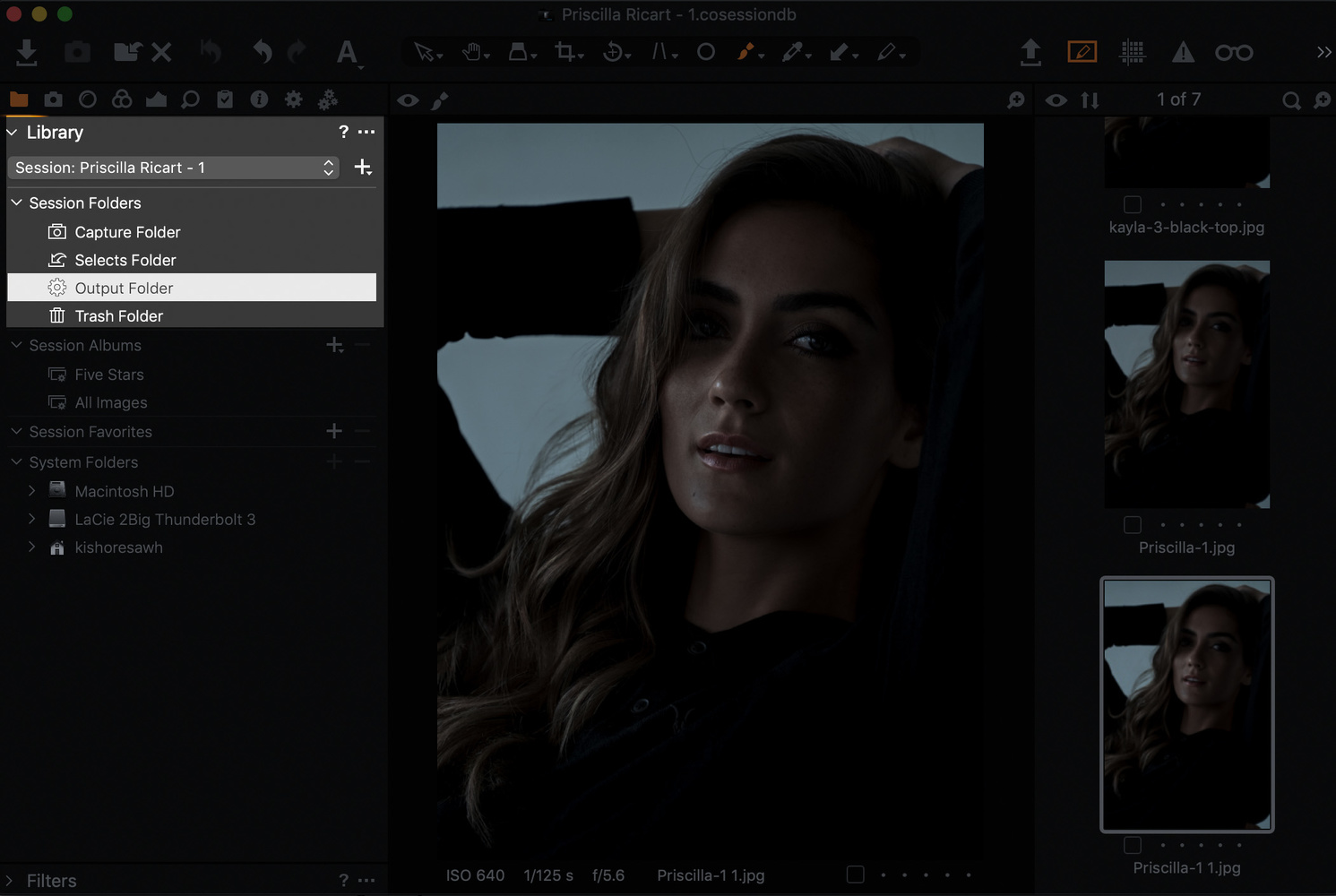 When you create a new Session, Capture One will automatically create a folder structure for you that will have the parent folder (name of your shoot, perhaps), and cascading from that will be folders for Capture (where all images are copied/imported into), Selects, Output, and Trash. And yes, you can create more folders in the structure to suit your needs, but this is the basics and tends to be most what you’ll need. You can see how the various folders are reflected in the application and your OS in the images above.

The benefits of sessions are plentiful, and we’ll explore all the ways they differ from catalogs in another post, but Sessions are easier and cleaner for organization, offer greater security in case of corruption of a drive, easily portable between computers, better image privacy, easier file management between teams, and offers simple adjustment backups.

There are tons of varied and deeper ways Capture One is different than Lightroom. We'll address more in the near-future, but while I can list them off, there's no better way to understand the differences than using it.

If you don’t have Capture One, this is the perfect time to try it, and you can click here for a 30-day full trial of Capture One Pro, or, if you're a Fujifilm or Sony shooter, click here to download Capture One Express for free so you can follow along.

If you're looking for a quick and effective way to learn Capture One, check out The Complete Capture One Editing Guide.

I hate to say it, but AI enhanced programs ala Luminar are eventually going to eat everyone’s lunch in this space.
Not because it’s better, (it’s not) but because it’s radically more efficient at giving the vast majority of users what they actually want. Which is a quick and agile improvement of our images based on simple rules-base manipulation of reproducible best practices.
Obviously, no algorithm will replace human judgement.
But the Delta between bespoke retouching and AI driven global photo enhancement is shrinking fast.
And with most of the eyeballs already transitioned from magazine pages to digitally delivered web content, there will be fewer and fewer use cases that justify bespoke retouching.
You hate that thought. Heck, *I* hate that thought. But to ignore it is idiocy.
The pace you can achieve between shutter release and eyeball-aggregating mass posting is, sadly, the primary metric that will drive things in the future. Not how delicately you can tweak the shadow rolloff in every wrinkle.

It’s really no different from replacing car parts. Once upon a time you bought replacement parts and used them to fix only what was broken. Today, you buy pre-assembled “modules” to exchange. Because robotic machines are WAY better at assembly than people.

Welcome to the future.
Sucks, but there it is.

Oh and IMO renting software is incredibly dumb if by doing that you also give the software company the ability to gatekeep your OWN intellectual property. My creative work is MINE no matter who created the software. And I refuse to do ANY work in any rental-only tool that enables the company to shut off my access to my own property for non payment of their continuing fees.
That’s basically ransomeware. And I’ll not have it.

Kishore, can you please tell how to use layers in LR. Didn't find it right now.

I just forgot: What I hate most in CO are the thumbnails. If you crop you won't see the image as it is. When lucking for a certain image I can't see properly which one is the right one. I will never understand this behaviour.