In the age of Instagram, if you can rock a floppy sun hat and big Hollywood sunglasses and have at least 3,000 followers, then you have a voice big enough to represent any number of companies, but being a brand ambassador isn’t all beach-side sangrias and posing with vibrant murals: scam artists have found Instagram, and the perpetrators are plentiful.

We’ve all seen it in our feeds. More and more companies are forgoing typical advertising techniques, opting instead for micro-advertising in the form of popular brand ambassadors. All sorts of products from camping gear to nutritional supplements are looking for active social media users to promote their products. 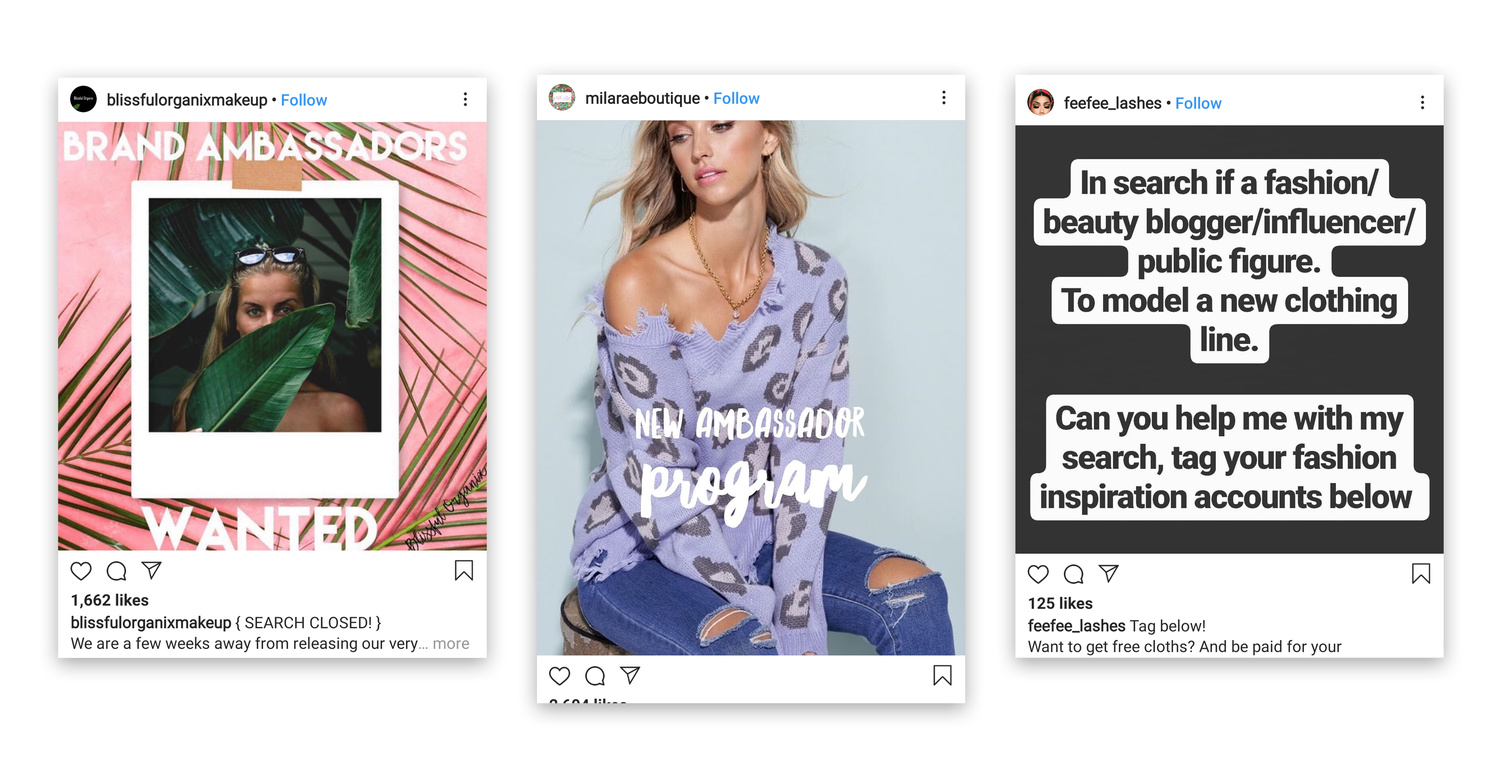 These types of posts are everywhere!

New third party companies are sprouting up just to help influencers leverage their social capital. Influence.co is a directory aiming to pair brands with ideal ambassadors, and they aren’t the only company providing that service.

So, you’re swiping through your Instagram Stories and you see it: a sponsored post offering free or heavily discounted gear in exchange for becoming a brand ambassador. You might feel tempted to see what kind of deal you can finagle, but like everything else in life, if it seems too good to be true, it probably is.

Let’s take a step back for a second. To be clear, I have a very modest Instagram following. I’m in the 1,200-follower range. Like most people, I’d love to have a bigger following, but (also like most people) I’m relatively lazy when it comes to building an organic following. I don’t post every day, and I don’t comment on other people’s posts unless they really speak to me. In most cases, I wish a fiery death on anyone who copy/pastes “Great photo! Go check out my profile! I think you’ll like it!” So, without becoming one of those people, spending time cultivating and harvesting new superficial connections for likes and followers or straight up buying likes and followers, I’m stuck with my slim set of followers. I’m cool with that. 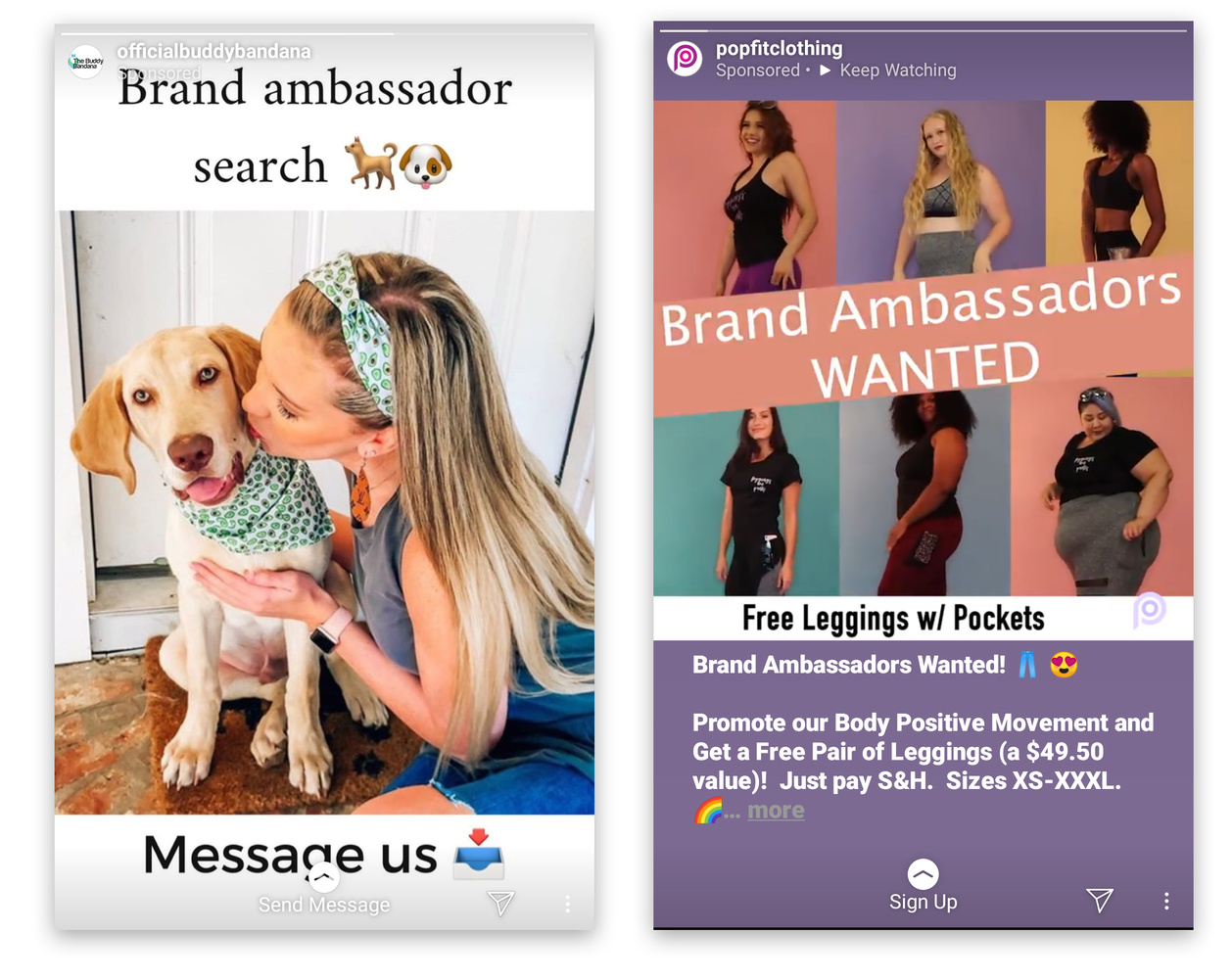 I tell you this so that you understand I realize it’s unlikely that a brand will want to partner with me based on my Instagram following alone. If I was pushing 12k, sure, that would be more likely, but at 1,200 followers, brand ambassadorships aren’t going to happen. Therefore, you can imagine my surprise when after applying on a whim, I was told by an outdoor outfitter (that I’d never previously heard of) that I was exactly who they were looking for! Free gear in exchange for using it and posting relevant photos sounded great, but the fine print on this and so many other brand ambassador “opportunities” is that you have to spend money before you can qualify to potentially earn commission on other people’s future purchases. To be considered an ambassador, I would have to buy a hammock ($70) or a bare-bones sleeping bag ($80) at almost two times what they would cost at any more mainstream outfitter. After that “initial investment” (this is starting to sound like a pyramid scheme), all I had to do was give out my unique coupon code and reap the benefits of my follower’s purchases.

This kind of thing is way more common than you might realize. These aren’t ambassadorships. They’re dishonest sales techniques aimed at the young with dreams of being Instafamous or making a quick buck through online popularity. When it comes to ambassadorships, the shady ones exist on a spectrum from the spurious technique I just mentioned to the downright scams you’ll find with companies like Dylo Cam. 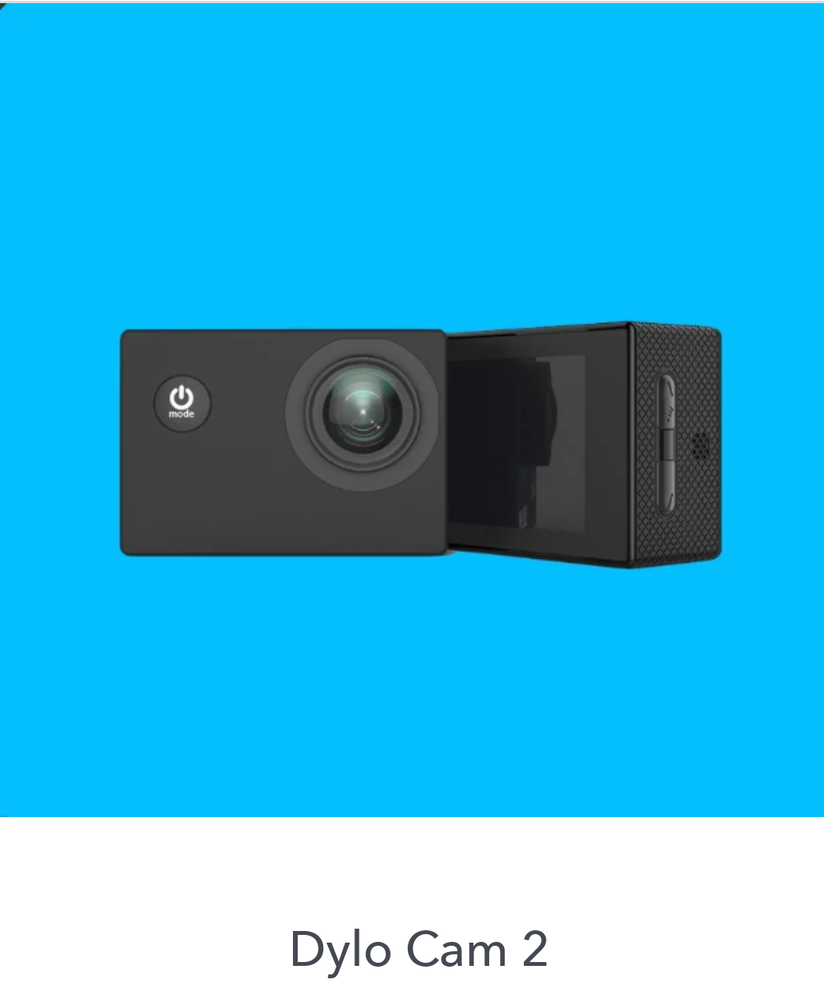 This is the camera Dylo Cam was promising new ambassadors for the cost of shipping.

An ad for Dylo Cam came up in my feed late last spring, offering an affordable GoPro alternative. Lots of new technology comes out all the time, so it's not that uncommon for an alternative product to hit the market under an unfamiliar brand name. I already have a GoPro, but since Dylo Cam was offering a waterproof, HD action camera at a fraction of the cost, I figured it was worth having for situations in which I didn’t want to risk my GoPro. Even better, they were offering brand ambassadors a chance to purchase the cameras just for the cost of shipping. It sounded too good to be true (because it was). Nevertheless, I applied, was accepted, and ordered the camera pictured below. Because at $17, why not give it a go? 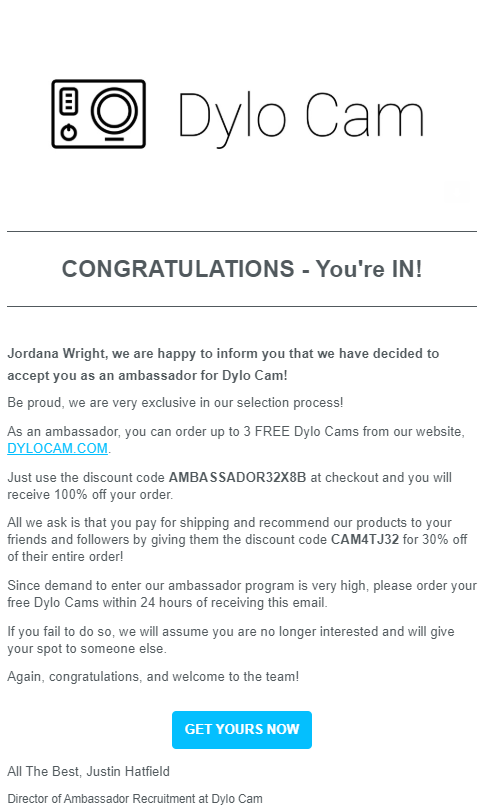 "Be proud, we are very exclusive in our selection process!" Yeah, I bet you are.

While waiting for the arrival of my new Dylo Cam 2, I decided to do some internet sleuthing (yes, I realize the time to do research was before ordering, but where's the fun in that). What I found were lots of people who had just ordered and were just as worried/skeptical as I was. The company was relatively new, having seemingly popped up overnight. There were suspicions that it was a drop shipping scam based in China. There was a sudden influx of YouTube skeptics promising updates if/when the cameras arrived.

Fast-forward two weeks, and while I did receive a camera from Dylo Cam, what I received was completely different than what they sold on their website. Laughably different. Even worse, they replied to my complaint emails with the firm no-backsies responses of “all sales are final” and “There maybe [sic] a slight difference in the photo but the specifications, descriptions, and functions are the same.”

Here’s what I received from Dylo Cam (not quite sure how waterproof it will be with a gaping memory card slot in one side): 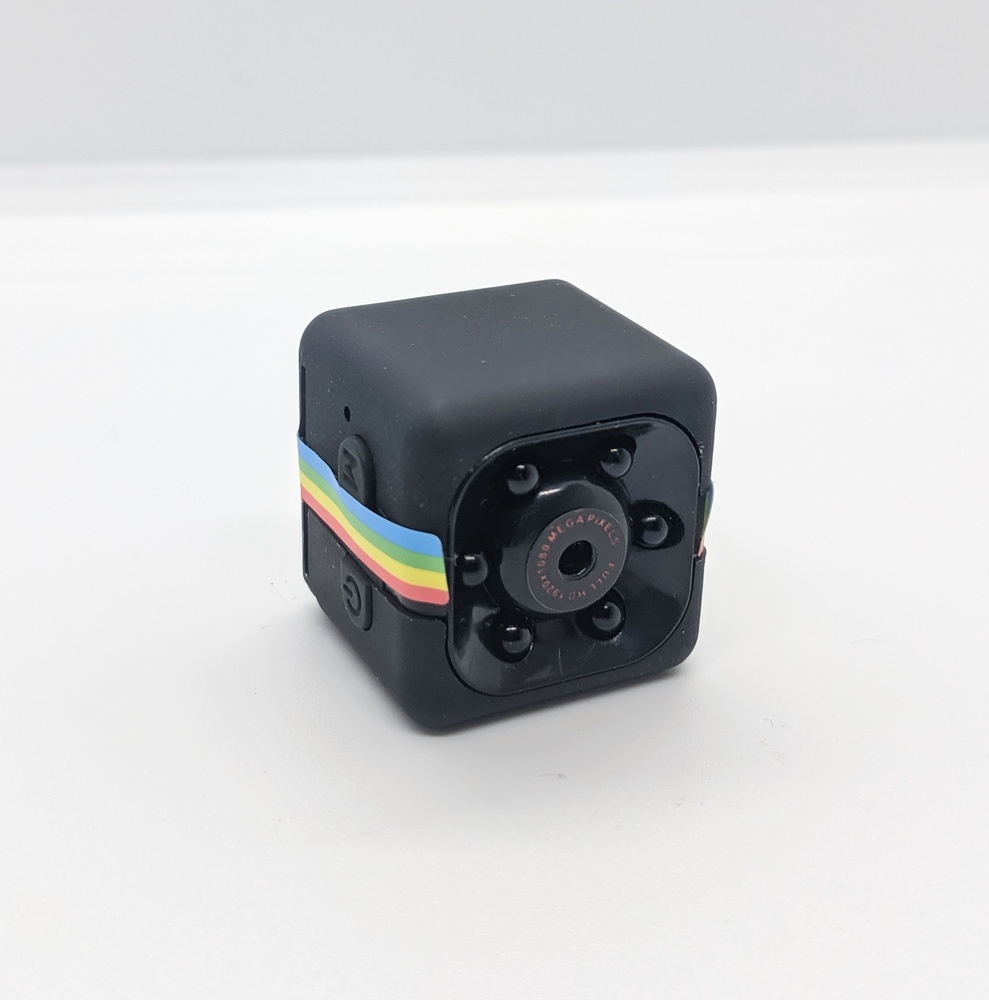 Look at that sad little camera. They couldn't even mount the decals straight. 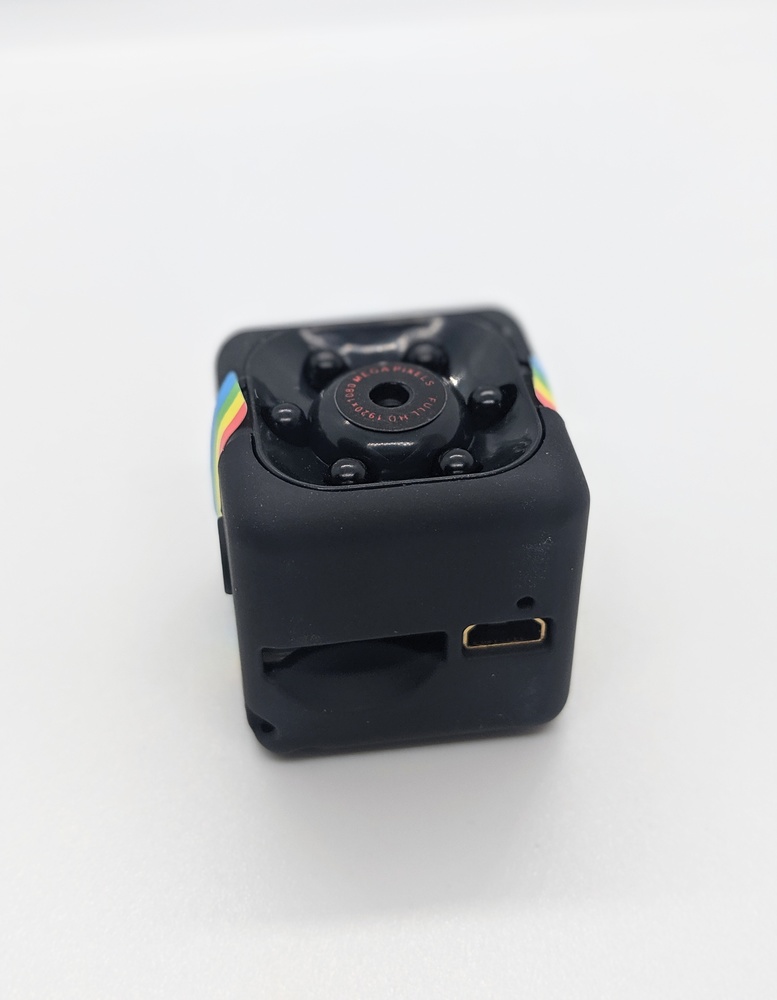 I immediately regret this decision.

Their website disappeared shortly after my order arrived, and when I tried to pull it up again while writing this article, I got a big, scary danger/phishing/security alert message from Xfinity.

The moral of the story is this: very few legit brand ambassadorships exist. A quick search of The Better Business Bureau's Scam Tracker website yields 785 scams with the keyword "Instagram" from the past year alone. If you are like me and don’t have a ton of followers, consider avoiding the waste of time and/or money that it takes to apply, join, or buy in. For many of you, this may be a no-brainer. If you’re dead set on being an ambassador, try to avoid the scammers by using a company like Influence.co to help manage the offers you get, or better yet, just use Instagram to share and view photos of interesting people, places, and things and don’t feed into the monetization that’s quickly destroying it as a creative platform.

What about you? Fall for any good scams lately?

Boudoir / January 11, 2018
The Importance of Having Brand Ambassadors for Consistent Bookings

Fashion / April 8, 2020
Why Do People Keep Falling for This Instagram Scam?

Perfect cam scam. Luckily the damage (or: tuition fees) was only 17 bucks,
Try to ask a simple question about all this ambassador stuff: does it bring any value to the customers? If not, bin it.

I find these days, scams like this are beginning to outnumber legitimate offers, and it’s scary!

Prime example, I’ve taken great care to curate my Instagram feed, so I only follow members / organizations / hashtags that I have a keen interest in relating to my photography interests. For the first I’d say month or two, I was getting exactly what I wanted in my feed.

Fast forward 4 months, and literally, MORE than a THIRD, sometimes even HALF, of the posts appearing in my feed are SPONSORED, or ADS, that are completely irrelevant to my original curation choices!

This is infuriating to me, because the whole purpose of why I went back on Instagram is being wiped away, and making me seriously consider saying bu-bye to it all over again.

That's why I don't buy anything I see on social media, it's a rule. I don't take followers "likes" of big brands of product or "like shopping at retailers" for real either. Zuck and the other thieves don't get a dime from me. Old fashion and proud of it!

if your social media is showing ads, theyre making money of you

No, the advertiser is giving them money. I don't contribute to the return on their investment. Nothing happen . It's the advertiser's problem to figure out if they made $, which is very hard to specifically track.

That Dylo Cam ... the one in the original pictures, not the one you got, I bought something taht looks 99.9% exactly like it ... 6 years ago. It's meh action cam. not HORRIBLE (the audio was but IQ was ok'ish for the time) but ...

For them to tell you that it;s new tech when it;s just a stolen product shot?

It's also a model that gets rebranded all the time. SJCam PNJCam, Rollei, 3SIXT, OZTrail ...