You don’t need a fancy studio to take fancy photographs. Sometimes, all you need is a garage.

When you’re first starting out, it’s easy to think that great photography requires a big space, expensive gear, the best camera body, and thousand dollar lenses. In the process of learning, we often look to our idols, those incredible photographers making beautiful work and sharing their process. We get to see beautiful studios, slobber worthy gear, and set ups we could only dream about. But that’s only part of the story. No one starts out with fifteen foot ceilings and a closet full of two-thousand dollar strobes. Our idols earned their stripes in the trenches of garages, too. 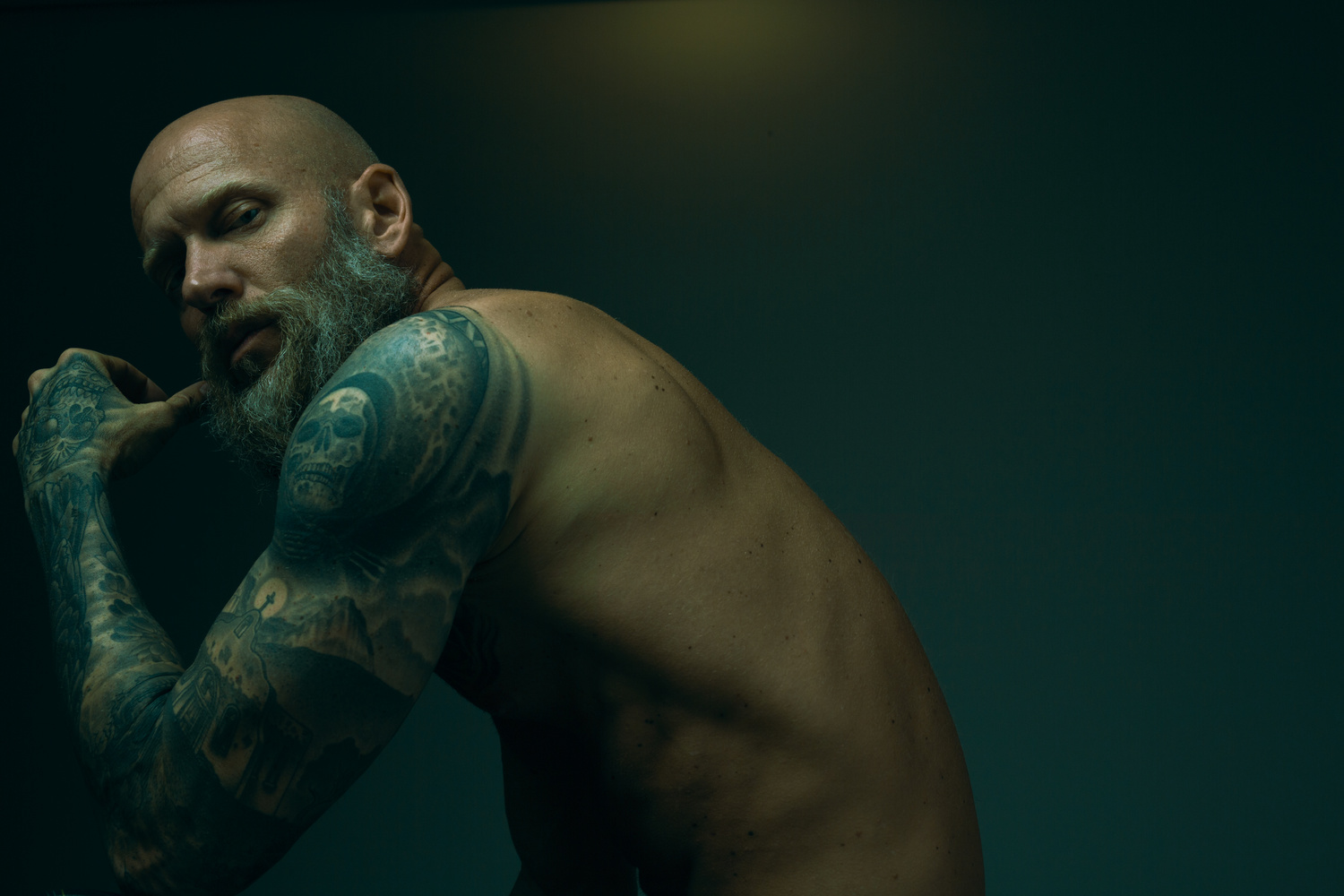 For the first half of my career, I lived in Washington state and as a young mother I made do with whatever space I could find. Sometimes that meant renting a studio if I had the money, but most of the time it meant squeezing people into a spare room while trying to keep my cat from nesting in the makeup artist’s kit. I used whatever I could to create the light I wanted; I bounced speedlights off walls, used bed sheets as diffusers, and built modifiers from milk jugs. It wasn’t easy, and it took a lot of experimentation, but I learned some incredibly valuable lessons about light during that time. 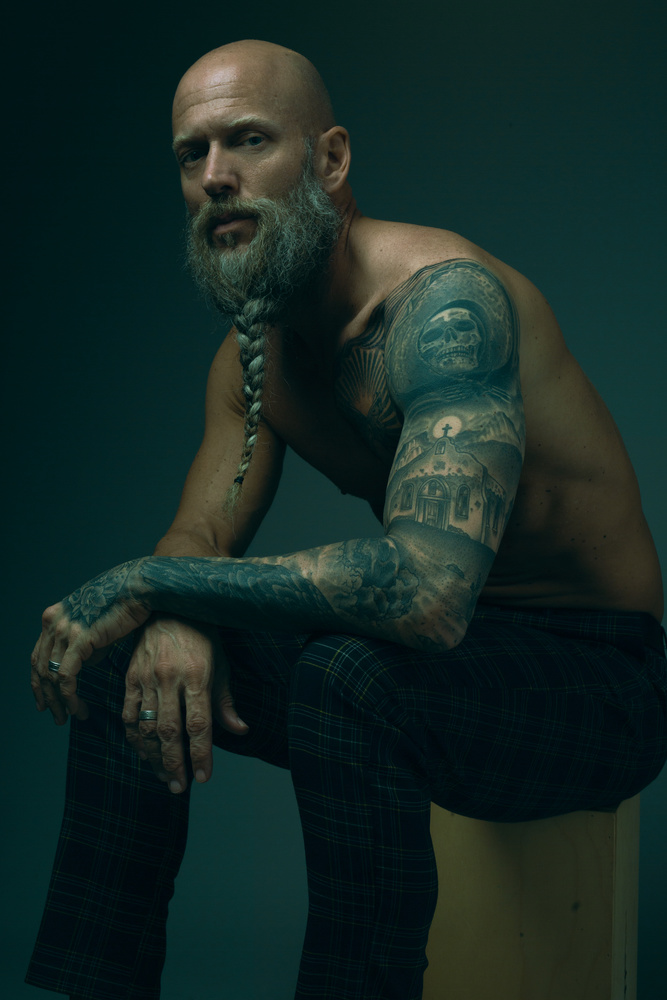 Later, living in Colorado I had the extreme pleasure of having a studio close to my home, and it was easy to get used to having a well appointed space so close... one that didn’t include toddlers or slobbering pooches or curious cats. One that had high ceilings, modifiers, and all my little photographer’s heart could dream of. Then I moved from Colorado to New Mexico, lost access to the studio and people I had grown to love, and had to get back to my roots. Luckily, with our new house came a new garage.

When you have lots of goodies to use and big spaces to shoot in, it’s easy to forget how much you can actually do with a simple space, knowledge of how to manipulate  light, and a few tools of the trade. To create these photos, I started with the garage, a single light, and a modifier. I knew I’d want more control of the light, so I headed down to the local Dollar Store and grabbed twenty-four 3’x4’ foam core poster boards. I duct taped them into v flats, with each V-Flat taking requiring boards a piece. That’s a whopping twenty-five dollars and some change to create two V-Flats. 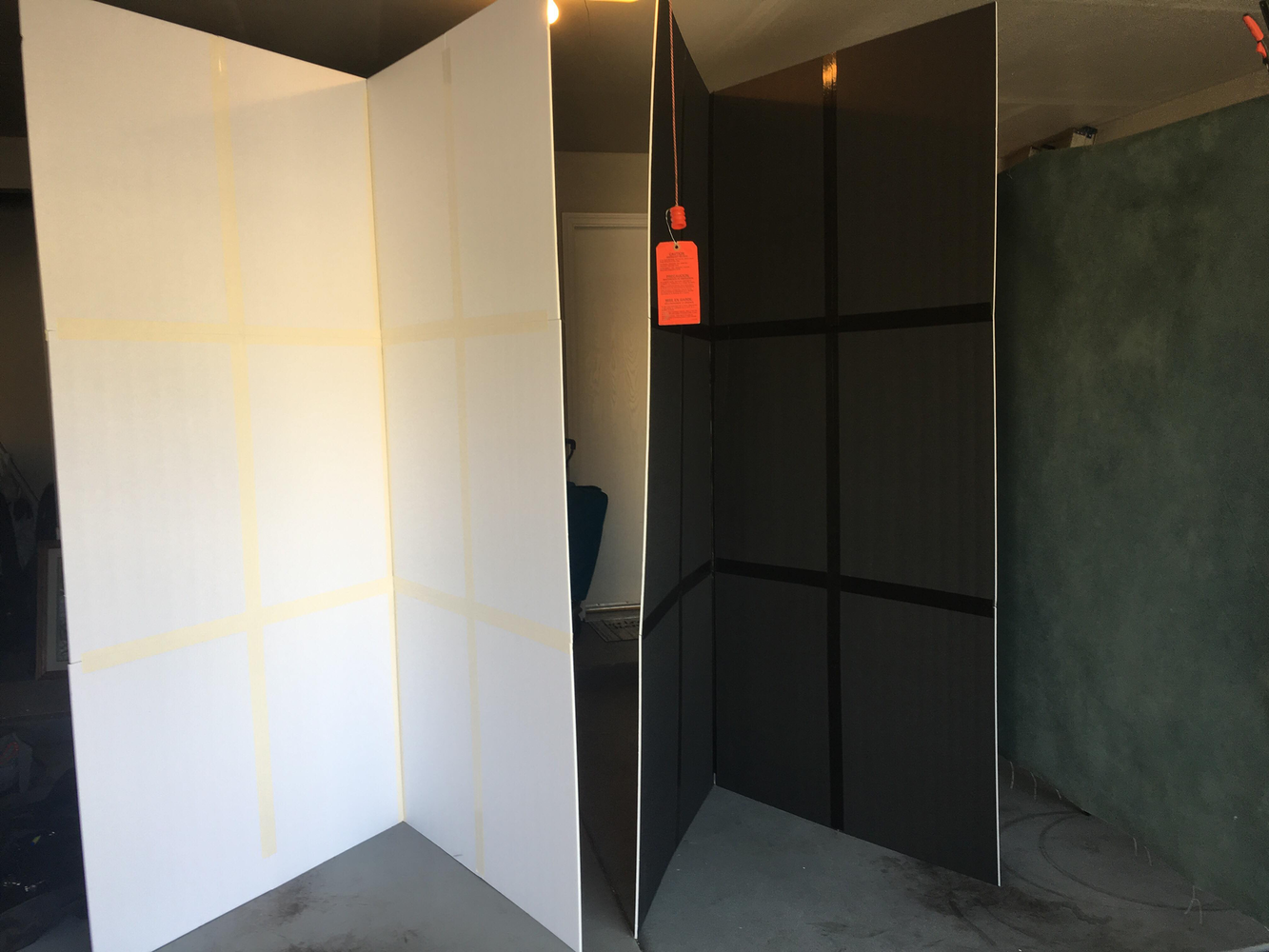 Each Vflat is made of 12 foam core poster boards taped together with duct tape. Gaffer's tape would probably be preferable, but I didn't have any handy.

Sandwiched between the Christmas ornaments, the tool box, and the camping supplies, I set up my backdrop, V-Flats, and AlienBees 1600 fitted with an Elinchrom Rotalux deep octabox. The Rotalux has an inner diffusion panel, which gives it two layers of diffusion, and it’s deep, so the light spill is a bit more controlled. But it won’t light up shadows on it’s own, so I added my cheap, DIY white V-Flat camera right to keep the shadows nice and open. The black V-Flat was added camera left to stop too much light from bouncing back in off the junk in my garage.

Here is a BTS shot I took before we started shooting. 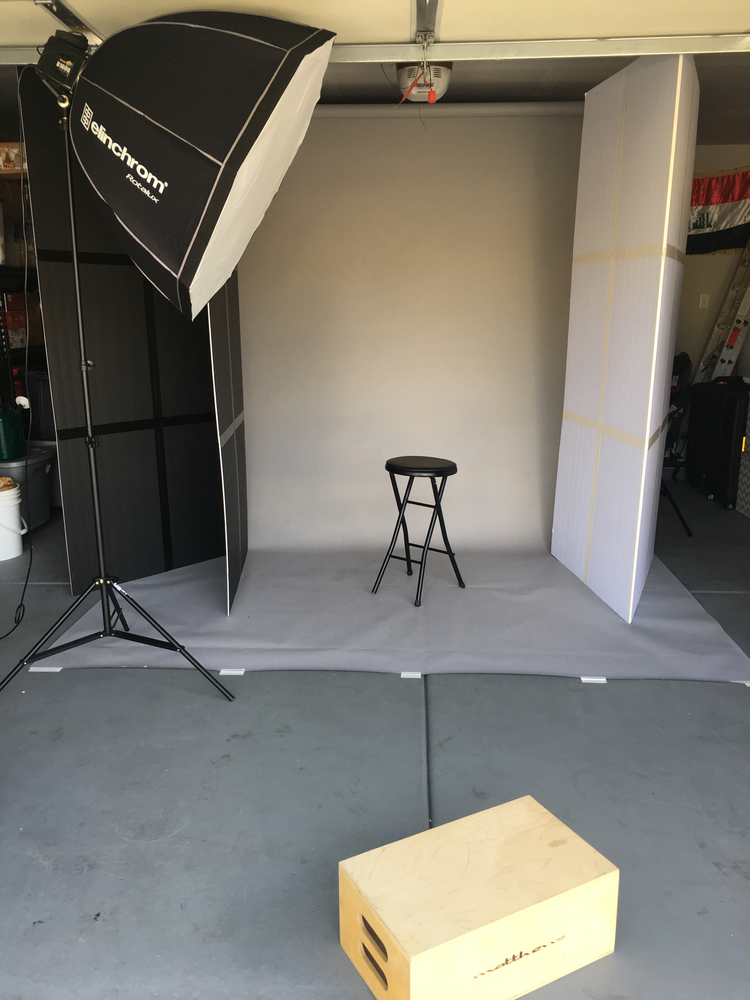 With this one light setup, I was able to get multiple looks, simply by changing angle and position, or by opening the garage door and using it for fill light. 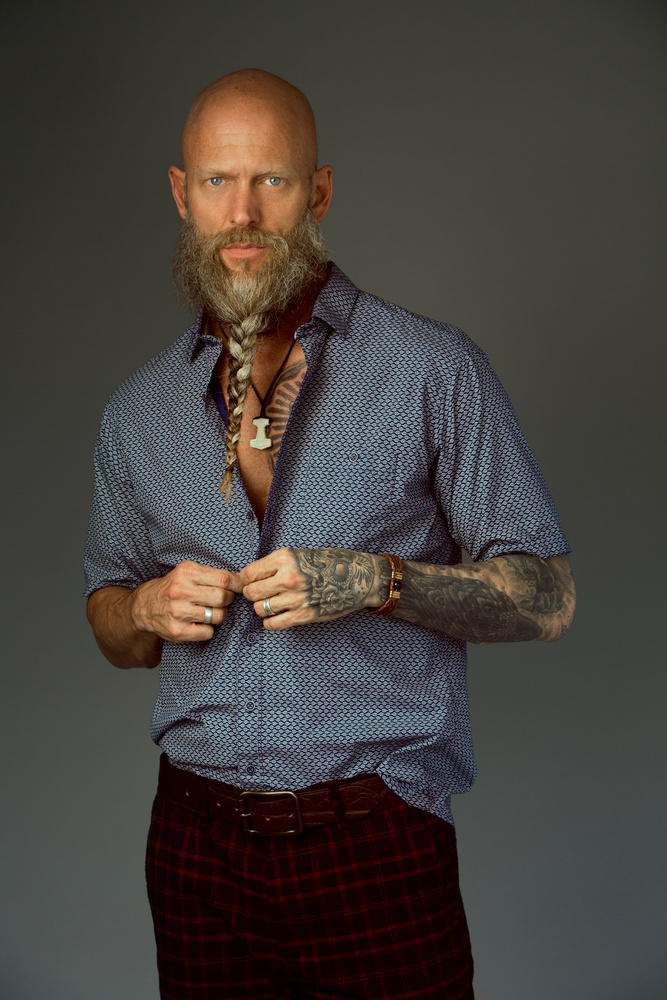 You don’t need seamless paper to pull off shots like this either, so don’t get the idea you have to run off and buy a backdrop stand, even though they’re pretty affordable. My first backdrop stand was created with PVC pipe and shower curtains. It will work.

Now, none of this is to say that huge spaces or expensive gear aren’t great. They totally are. And if you can get your hands on that Rotalux Deep Octa, you definitely should because I’m kind of in love with the light. But you don’t have to update your modifiers or find a grand space to shoot in to start getting great photos, so don’t let lack of space or other cool goodies stop you. Don’t let the fear of ‘not having’ stop you. All the most important photography lessons are learned during the times when you’ve got to be creative. Then, when you have space and cool stuff, you’ll get the most out of them. And if you happen to stay in a garage forever... well, that’s not so bad, either.

I am not sure why pop-up reflectors haven't replaced V-Flats as go-to flags/bouncers yet.

Cost maybe 40 bucks on amazon per piece, but they can be collapsed for easy storage, don't break as easily as foamcore/cardboard and save labor.

They modify and redirect the light differently, and stand up on their own. Also I think people like just making their own because it’s about as easy a DIY project as can be.

This is true, I have a pop up reflector, and the reflective surface is flaking off, I can either spend 40 dollars for a new one or make my own for 5

Ive used V-Flats for decades. Aside from the fact that the surface is quite large...you can vary the spread by opening or closing them to different degrees. You can have one as far open as possible ...but another can be narrowed down so its barely open, emitting a very soft yet directional light. I am referring to them when used as actual modifiers, vs purely reflective. They are dual purpose for sure.

Great article Nicole. It’s nice to see the rest of the series as well.

"We get to see beautiful studios, slobber worthy gear .... "

I always enjoy a lovely turn of phrase. Not often you find "slobber worthy" in polished prose. I am pleasantly surprised.

Here is even more on V-Flats:

Even though V-Flat World offerings are expensive, I could never find DIY supplies that didn't end up costing pretty much the same thing. Comparable 1/2-inch Gatorfoam is crazy expensive!

They use basic foamboard? I've even read a few reviews saying they were surprised it was just basic foamboard and were expecting something more durable.

I have had good results across the art spectrum with Blick. Cardboard is light weight and cheap. I like the notion of the flexible tape mentioned in the link to the other Fstoppers article.

With sheets this size, one could quickly fabricate whatever setup was useful. Put some trapezoids in the mix and you would be hitting the architectural big time right there in your studio.

These can be made just fine with 3/16th foam board and you should be able to source it local around $20-25 a sheet from a plastic supplier. Check with local sign shops where they are purchasing their stock.

I have also used a king size white bed sheet, hung on a wall all you need is a couple of push pins, or a length of pvc and suspend it from two light stands.

I appreciate that, thank you!