A Photographer's Photos Become Icons of the #NeverAgain Movement, and No One Knows Who She Is

With the rise of #MarchForOurLives in response to the school shooting at Marjory Stoneman Douglas High School in Parkland, Florida, students Emma González, and David Hogg have been the two survivors that have been the most visible and outspoken critics of the status quo when it comes to gun control. Their images have been circulated in the media and even turned into posters for the #NeverAgain movement, many of those bearing a striking resemblance to an early photo of González.

While the images have been spread far and wide, the photographer’s identity has not. Until now. Emilee McGovern is the photographer who photographed the pair of Stoneman Douglas students after a rally just days after the event. She posted the photos to her blog after the event and from there, versions rocketed across the internet, finding their way to news services and social media accounts.

McGovern is proud of the reach that the photos have gotten, but has conflicted feelings about being the photographer behind it that no one knows. She describes her entry into journalism as “less of a choice and way more of a calling.” She believes strongly in what she’s doing and the work around the movement, but voiced concerns about how the photos were being used.

“It is a daily battle of emotions. There are a lot of parts to this. First, I'm stoked. I think this is amazing. I think anyone would. Knowing that you've inspired other artists to create. Or that your work has resonated enough to invoke someone to want to share it. Honestly, what else are we here for? When you decide to be a photojournalist, you kind of come to terms with the fact that you might not ever make much money doing it. So sometimes the gratification of people simply responding in this way, has to be enough. … We'd all like to believe we don't need recognition, we can do our jobs and humbly continue on, but when your entire future depends on whether or not you've been published and where, it can be less of a courtesy and way more of a necessity. So when your images start popping up everywhere without any proof that they belong to you, it can be scary, because you can't control it, and you definitely can't predict an outcome” — Emilee McGovern

Florida-based photojournalist McGovern has spent the last month diving full-force into coverage of the #NeverAgain movement, following the young students all the way to Washington D.C. for the March For Our Lives. Her Instagram feed and Twitter posts are a chronicling of almost everything that’s happened around these Stoneman Douglas students since the shooting. It’s powerful work.

“Everyday all day the story of Marjory Stoneman Douglas and the Never Again Movement, is my life. And being out there with those kids is way more important to me than sitting at home tracking down infringements. All that really matters to me is that I get to continue my work. I get to continue telling this story that I care deeply for. And just hope that the people who want to hear about it, find their way to me organically.” — Emilee McGovern

McGovern added that no one has contacted her to license the images. The only people who have permission to use them on their social media accounts were González and Hogg, according to the photographer.

“Don't get me wrong, having your photos kind of run off without you can sometimes feel somewhat disheartening. Like you're no longer a part of something that you actually are a huge part of, this thing that you've dedicated your life to. I think any photographer who's ever had this happen to them can relate to that," McGovern said.

This is not unlike what’s happened in the past, when photos reach well beyond the photographer’s control. For a close modern analogy, take the case of Shepard Fairey’s “HOPE” poster of Barack Obama, which was cribbed from a photo by AP photographer Mannie Garcia.

How Did She Get the Shots? 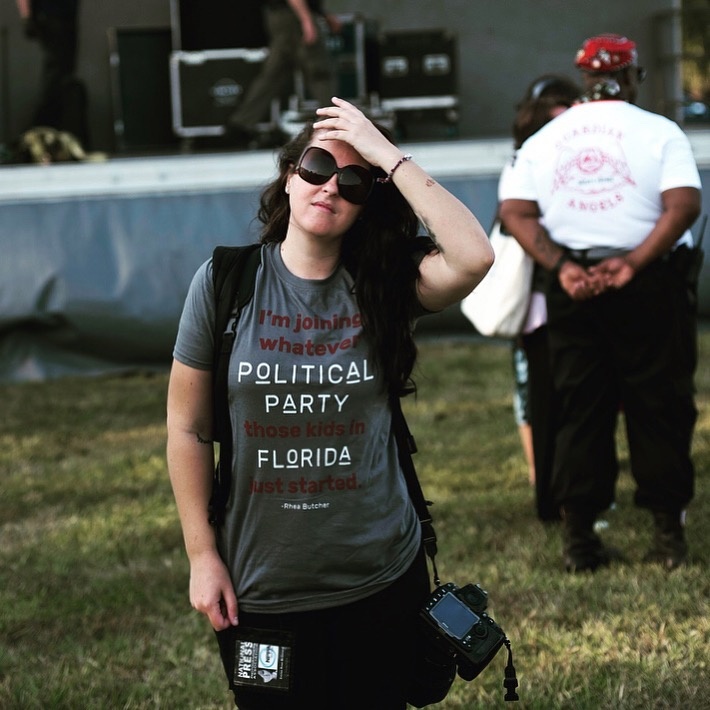 Photojournalist Emilee McGovern at a #NeverAgain rally. Photo by her father, Francis McGovern.

You don’t often see portraits at rallies. Usually you’ll see the speaker standing behind a podium. But McGovern said she wanted to do something different, and so after hearing the two students, who were then not as known on the national stage, speak at the school, she decided to ask them for a portrait. She wanted something candid without posing or coached expressions. While the sun was up that day, she found an awning to photograph them under and used her Nikon D810 and 70-200mm lens at f/2.8. She said that there were five other journalists waiting to speak with the students, and so time was short. McGovern explained, though, that she was able to make a connection with the students in that small window.

“What matters is the authenticity of the moment, and that is exactly what you're getting with these two portraits. I had no idea when I took them that they'd end up being as important as they have become. I didn't know they'd ever be seen on such a large scale. I personally wanted their portraits, I wanted to remember this forever. So the most important tool I used that day was my gut. It's also important to know that If you want to get emotion out of your subjects, you have to channel your own emotions, you have to convey genuine empathy. If you start to feel what they feel, you'll understand how the image needs to be taken.” — Emilee McGovern

Assault Weapons are not available to the public. Those are used by the military. Maybe you are referring to AR-15 rifles. The rifle that has been vilified by the liberal press and democrats. These are sporting rifles that are used in .01% of crimes.