A Small Story About the Value of Photography

This is a short story about a brief moment and the significance of a photograph.

Today, I’d like to tell you a story that may or may not be true. It’s a small story, seemingly insignificant aside from the parties immediately involved. But the brief moment in time stuck with me for some reason, and I thought I might take a few words to share it with you.

Last week, I was in downtown Los Angeles, scouting locations for an upcoming activewear fashion shoot, and pulled up just outside of an old warehouse tucked away off the main stretch of road just beneath the freeway overpass. Nothing says hard work and fitness quite like an old, dirty, industrial setting. And downtown Los Angeles, despite the glitz and glamour of the rest of the city, is full of such forgotten monuments to productivity.

I wasn’t completely sure which of these hollowed-out brick buildings was the location I was looking for. There were no building numbers. And the site rep simply noted that it was “the one with the graffiti” in his email, a description almost as effective as identifying a fish by saying it was “the wet one.”

After a few minutes of stumbling along a street that could easily be confused for an alleyway, and trying mostly successfully to avoid messing up my sneakers by stepping on the garbage obstacle course that covered the road, I eventually relented and simply called the rep to have him come and get me. He said he’d be right out, so I quickly replaced my phone in my pocket, still unsure of who or what might be jumping out from behind that supremely neglected dumpster at any moment.

As I waited, I did my normal scouting checklist. Trying to envision how I would describe the location on the call sheet. Trying to figure out where I would suggest the cast and crew park their cars. Mundane stuff, but necessary. 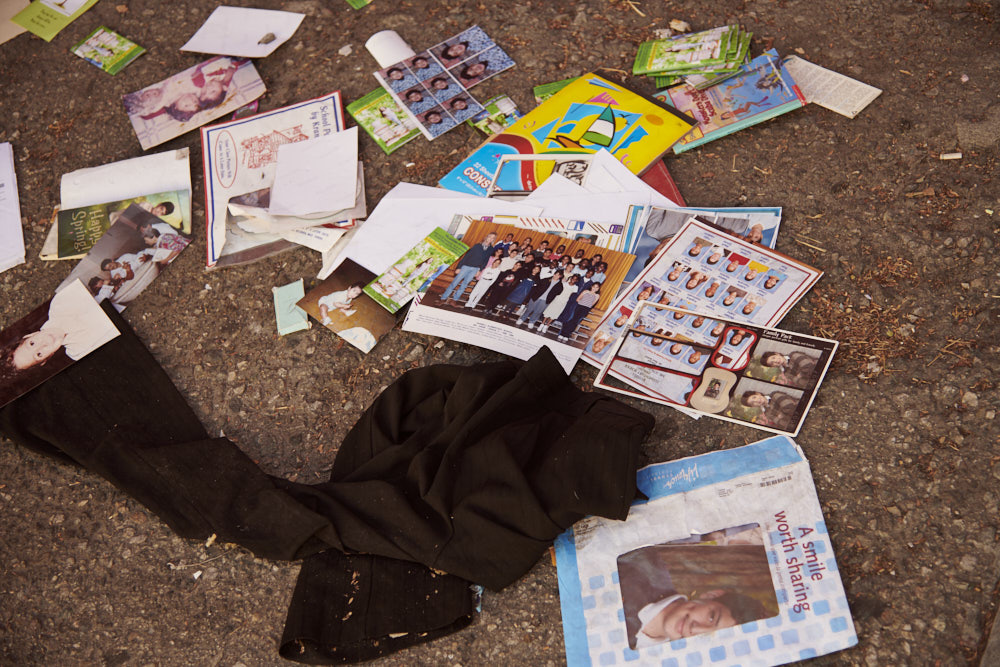 But what caught my attention most was a pile of debris lying on the ground just behind my parked car. I had been careful not to drive over it when I was parking, fearing it was broken glass ready to puncture my tire. But on foot, I took a closer look and found something much more unexpected.

Aside from two discard items of clothing, the pile of debris consisted almost entirely of what appeared to be family mementos. A few official looking documents, but mainly scattered photographs of a family. Some were snapshots, presumably taken by a proud parent of their beloved child. Then, there were envelopes full of those professional school portraits that children are forced to sit through at the beginning of each school year, the kind that parents then order multitudes of 4x6 and 2x3 prints of so they can slide them into holiday cards or stick them beneath the semi-adhesive pages of the family photo album.

Seeing these school portraits in particular really had an effect on me. The photos themselves were really pretty standard. But seeing them laid out on the proof sheet immediately took me back to being in kindergarten and being pulled and prodded, mostly against my will, into the perfect pose for the abundantly patient photographer to take my photograph. 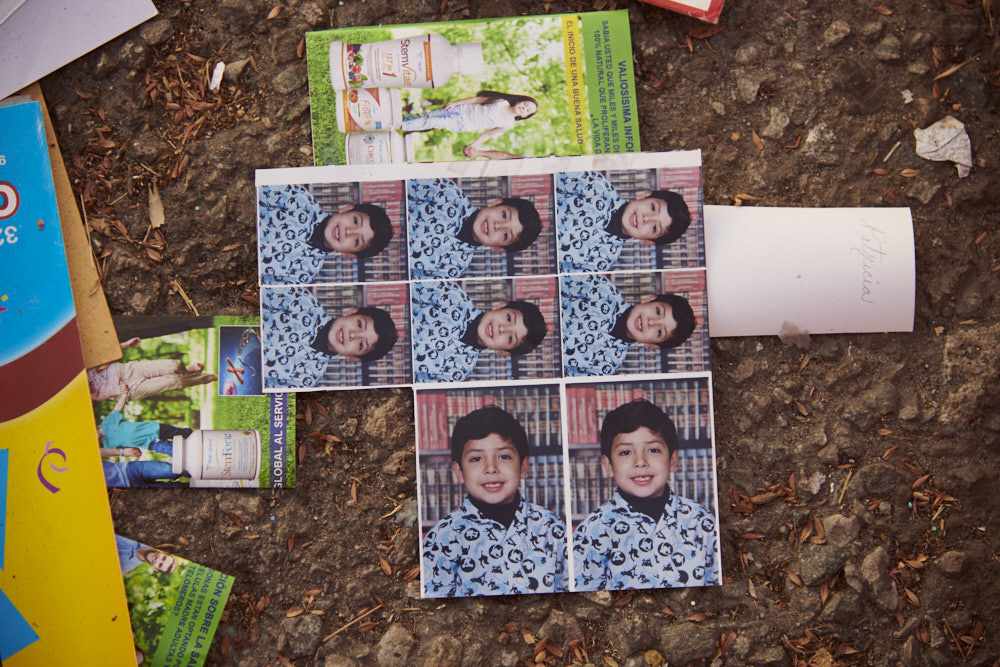 Seeing the proof sheet took me back to how eventually receiving her ordered prints in the mail always put a smile on my own mother’s face. I was too young to understand concepts like familial love or Rembrandt lighting, but I did know that it was always a good day when that envelope came.

My mother would then take each print and carefully line it up in the chronologically organized family photo albums — albums that only grew over the years and she maintained carefully before eventually passing them along to me to keep for the next generation.

A photograph is just a reaction of chemicals to light (or sensors to light). A physical print is just a piece of paper that documents the result. But, for those who receive a print, that piece of paper can be transformed into a tangible memory that they will cherish for the rest of their lives. That printed piece of paper means something. And, to the person holding it, can be more valuable than silver and gold.

So, how had this particular bounty of images ended up so unceremoniously discarded on the side of the road? Why did these treasured artifacts now find themselves forgotten beneath a patina of footprints and spilled bottles of liquor? What were the series of events that led to this particular pile of trash being here? 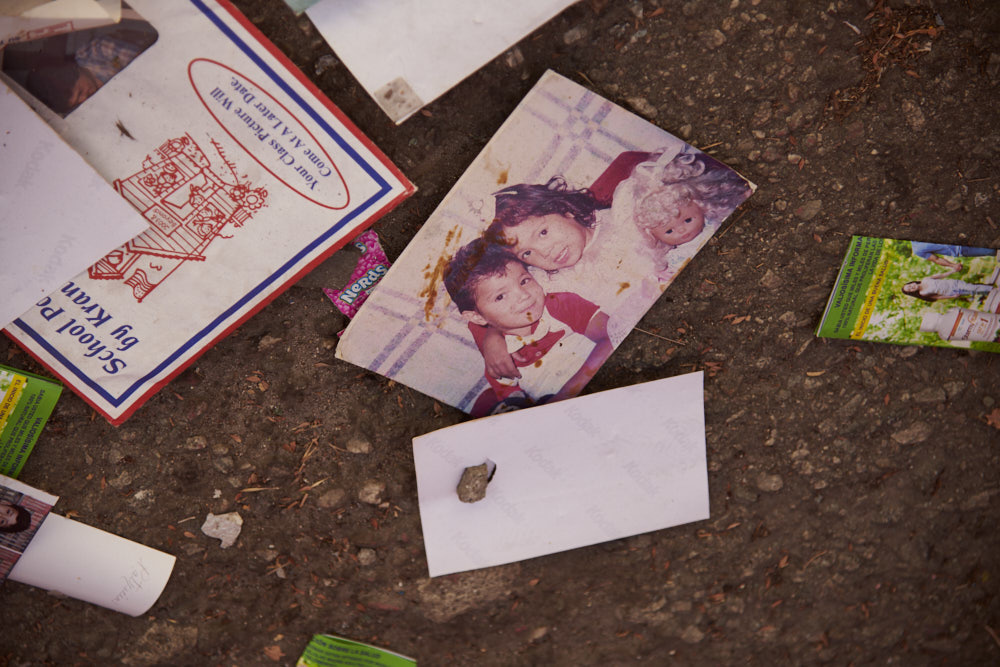 This is, of course, the part of the story that may or may not be true. Naturally, I have no way of knowing how that pile got there. Yet, I still couldn’t prevent my mind from launching into a little armchair detective work.

Had all these things fallen off the back of a moving truck driven by a less-than-attentive college student making a few bucks on summer break? Doubtful. The road I was on was barely a road at all. It was very much a side alley masquerading as a street and not likely the kind of place one would find a moving truck.

Maybe the parent of the child in the photograph lived in the area? Possibly. But, again, this particular street was devoid of anything but industrial spaces. And it was at something of a dead end, meaning that it’s unlikely someone would find themselves passing through here going to or from their home.

Unless, well, unless this was their home. While the area may have few identifiable homes, it did have a large number of often forgotten homeless men and women who might appreciate a quiet side street like this as a place to call home once the sun goes down. Having a look up and down the alley, I realized that this might be exactly the kind of place I might look for if I was in such a situation.

Presumably forced to limit my possessions to those I can carry with me, I too would only keep those things that meant the most to me. My money, whatever there was of it, my documents, and my children. Or, at least, the only representation of them I might have of them. Even if it were just a packet of school pictures. 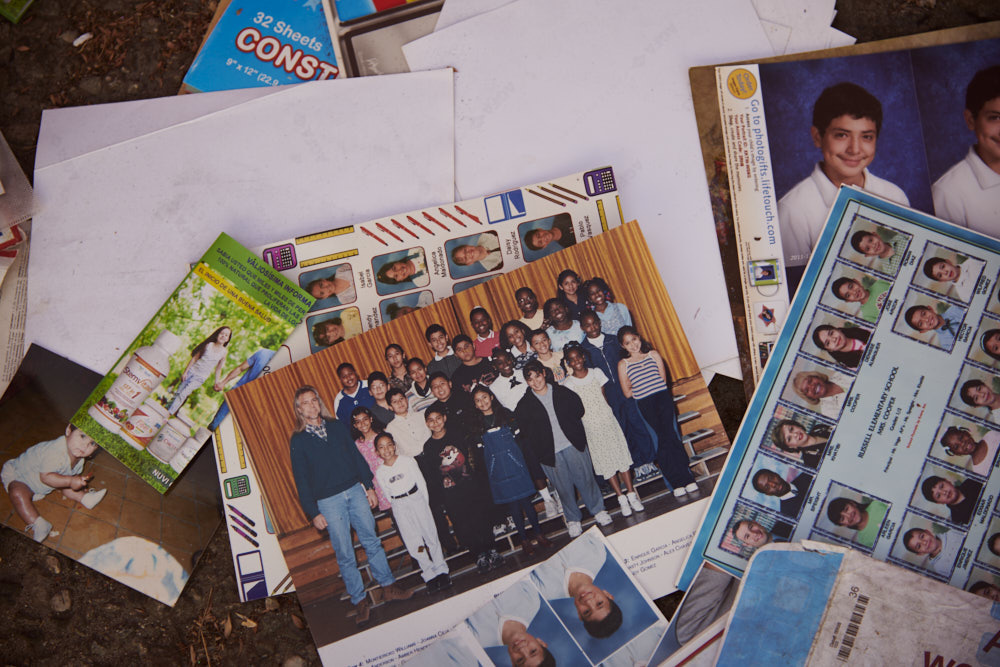 Was she still in contact with these children, or were they out in the world somewhere wondering when their mother would come home? Had these children perhaps at one time also made these side streets their home? Was the mother swept up quickly from the sidewalk, forced to leave her belongings behind? Or had she chosen to leave them behind? And, if so, what would that mean for how she saw her future?

So many questions ran through my mind as I stared down at the pile. So many unanswered questions. When the site rep finally did emerge from the building to take me on my scout, the whole idea had begun to seem trivial. I mean, who in the world needs another photograph destined to be left on the side of the road?

But the presumed tragedy running in my head was only affecting me that way because I knew that those discarded prints had value. Photography has value. When we create an image, whether it be for an advertising campaign or for a school yearbook, we are creating a record of a moment in time. We are documenting those we love and the subjects and issues that we care about.

Those images have the power to be relevant not just today, but for generations to come. They mean something. Our work means something.

I will never know the true story behind the pile of photographs on the sidewalk. I am really hoping that the explanation is far more simple and far less dramatic. Hopefully, the pictures were all thrown out simply because the mother had multiple copies and their presence on the sidewalk was just the result of an exploded trash bag. That is the explanation that I’m hoping for.

But as I drove home from my scout that day, I was overwhelmed by the value of what we do. Photography gifts us the power of eternal memory. We can use light and shadow to conjure up precious gems that can hold value to pass along to future generations. We are blessed to be coming from a position of strength. We are all fortunate to have the opportunity to pass that power to the world.

I was hoping this was going to end with a story about returning the photos to the person who lost them when their backpack was stolen.

My thougt was similar but I thought about some addict that stole an envelope in a house where valuable docs or cash was hidden then just got rid of what he or she did not find valuable in a back Street. I guess in the real world it's a good idea to not mix store sentimental valuables with actual financial ones.

I hadn't thought about that theory. But, you could be right. Could be someone broke into a car/building took the money and tossed everything else.

Yes me too, but the point at the end has hit me before and it is breath taking almost, the power images can have. The thing I am most proud of is the countless thousands of parents who cherish the images of soccer, football, basketball, baseball, etc. players, children whom I have taken portrait and action shots of. Sure I have also been published in major newspapers and magazines read by millions of people, but that is only cool the first time or two, it gets old to some degree, is what I mean. Awards are always awkward, but humbling as well and everyone is somewhat proud of themselves in the back of their mind for being acknowledged by their peer's, etc. However like I said whats most important is when your images have an impact in people's lives and they cause love, which lasts forever or as long as they have those images. Doing youth sports action and portraits is something I will always remember and be most honored to have done, it's the most important work I have done in my opinion and this story reminded me of that. Getting the shot or capturing the moment that tells a story is great, but images that have an impact, now those are the best images. The funny thing is taking portraits is easy, action is much harder for most, but any type of photography can be impactful, if done right and with the right mindset and heart intended.

Those images you take for the families, they will cherish forever.