A major international court ruling may force DJI to pull numerous drones off the shelves in the United States due to a patent violation.

The ruling came on March 2, when Steptoe, a law firm representing Autel Robotics USA convinced the US International Trade Commission's chief administrative law judge that DJI had violated Section 337 of the Tariff Act of 1930 through the act of importing and selling drones that violated US Patent 9,260,184, which is held by Autel. The patent refers to a locking mechanism for locking drone rotors and was first filed in 2013.

As such, the judge has recommended stopping the importing of numerous DJI drone models, including the Mavic Pro, Mavic Pro Platinum, Mavic 2 Pro, Mavic 2 Zoom, Mavic Air, and Spark. A further recommendation calls for a prohibition on the sale of any of the aforementioned models that are already in stock in the United States, which could see these models disappear starting in July (if the ruling is upheld).

Meanwhile, DJI will need to put up a 9.9-percent bond during the forthcoming 60-day review, and Autel has filed a further petition to stop the sale of Phantom and Inspire drones as well. Certainly, if upheld, this would have a huge impact on the drone industry in the United States.

I don't have a DJI Drone, but if it is a true violation of a patent, I understand. Patents are used for a reason, and DJI, had to have known up front but was just blind to the possibility, due to what I believe is, pure arrogance, and China's cavalier attitude about patents and property rights. They new they had just about the whole market sewed up, that's why competition is good. Should this Law suit happen, the Market will swing the other way for Autel, for a while anyhow.

boy, the soup gets thicker and thicker

This is about locking rotors, basically a convenience. This however doesn't erase the fact the DJI make the best drones in the world because of software and sensors, not locking rotors. This is also the same reason why Autel drones are shit, because they have shit software. This is about trying to slow down the most dominant force in the industry. If DJI had gone with another rotor design Autel wouldn't be doing any better than they currently are.

Search results on Autel from Google: "They are, technically, an American company, but they are owned by Autel Intelligent Technology in China." Hmmm. This is really a Chinese company suing another Chinese company. Who knew?

So, I guess the next week will be like...
(Nice marketing plan from DJI) 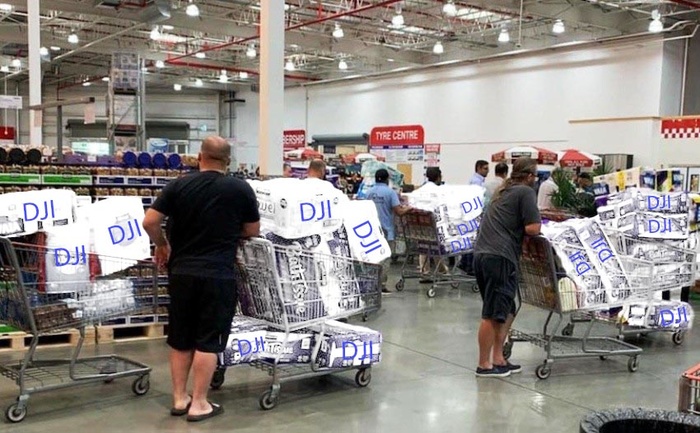 If Autel made a better drone i would agree, but they don't. The patents they hold are in this case restricting innovation and not supporting it. DJI should throw them a few million and call it a day. Autel should take that money and innovate.

Damn, patent trolls are a cancer of modern technological society. The whole system is rotten and favors trivial patients and frivolous litigations by patent trolls over true invitation and Incentivisation of original creations. Software parents are especially atrocious, at we see hardware is well suited for trolls as well.

I'd disagree that this is a patent troll incident. Autel actually makes products, as opposed to "actual" patent trolls which just purchase patents and make companies dedicated to suing, and then sue people while not actually utilizing the patents that they own. How good the actual products by Autel are is another story, but at least they have something that you can go out and purchase.

I'm personally no fan of some of the patent laws in this country which can cause serious undue burden on smaller startup companies that can't compete with Jim Moneybag's Patents R Us, LLC suing them for all they're worth if they make so much as a tiny misstep on their Duck Feather Analyzer patent when building a better mousetrap, but DJI is no small player in this market so they can afford to make their own stuff or license it until the patent expires.

China's been stealing IP for decades. About time we start holding them accountable. Now if only we could punish them for eating bats.

Aside from the fact that the winner is a Chinese company? The China haters are doing immense harm to American consumers.

Patent is now the leading obstacle to innovation. Tech is getting really dull as a result.

The US is targeting China for intellectual property theft, but is the fight really worth it?
https://www.scmp.com/comment/opinion/article/3046129/us-targeting-china-...

Sounds political to me, any blow the US can currently deal to China they will!

Am I wrong in thinking DJI could just buy Autel?

I fly DJI... Own several models... Love them… Hate the fact they are made in China... Time for the US to build a good US made drone... This is just about propeller connections... I imagine there is a lot more US technology embedded in DJI drones... China Haters? We all should be concerned about China, its not political but common sense... They are not our friends...