In October, my friend Corey Berse and I somehow convinced our wives to let us go to Iceland for a week without them (neither of us are professional photographers, so a week-long vacation that did not include them was not the easiest sell). Our plan was to drive the entire Ring Road in six days and shoot as much as possible. Here are the highlights, some pictures, and a video of our trip.

After landing in Keflavík, we made our way to Camper Iceland to rent our home for the next six days: a pickup truck with a camper on the back. 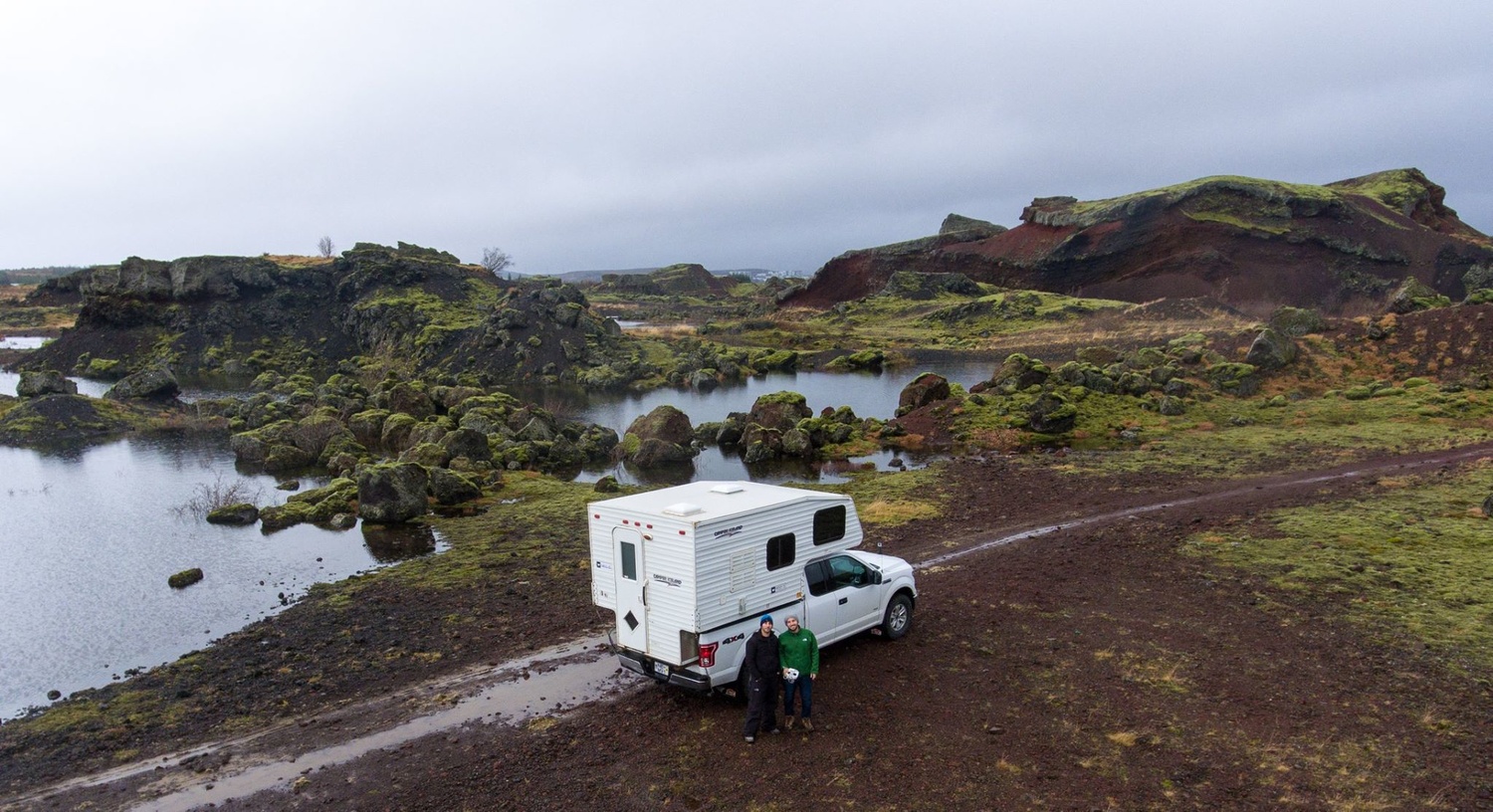 While we had a rough itinerary, we thought that a camper, rather than hotels, would allow us to maximize our flexibility to shoot what we wanted and when we wanted. We knew that we would have to adjust to the weather and that some of the best parts of our trip would be the unplanned stops between our destinations — stuff we saw on the side of the road and the resulting detours. So we needed to build in time for that. Other than some spilled milk, which did not make the camper smell very good, the camper was the way to go.

After loading up all of our gear: five cameras, a GoPro, a DJI Phantom 4, a lot of lenses, and our tripods, we set off for our first destination, Kirkjufell. Kirkjufell is an iconic, conical mountain with an accompanying waterfall named Kirkjufellfoss.  Although we had each seen hundreds of pictures of Kirkjufell and watched Fstoppers’ Photographing the World With Elia Locardi’s Kirkjufell episode, we ignored Google Maps and somehow drove right past it (we swear it looked different from the road). When we ended up at the entrance to a prison, we realized the funny-looking hill we drove past must have been Kirkjufell. We arrived just in time for sunset, which was nice. 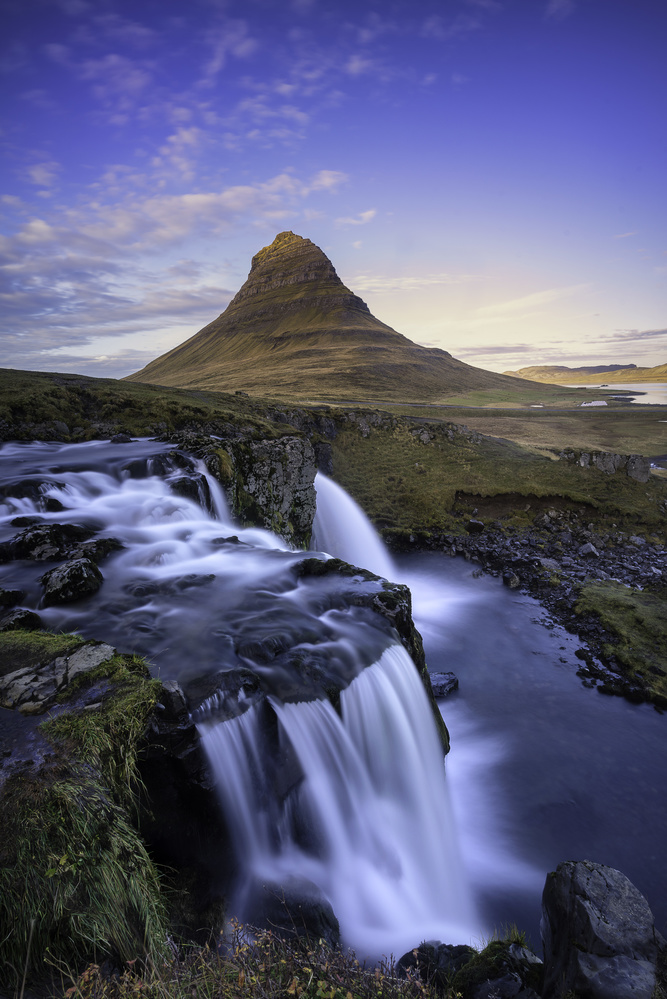 However, the highlight came that evening during dinner when the sky started to turn green. We scrambled to gather our gear and rushed outside to watch the northern lights dance for an hour. The northern lights were unlike anything we had ever seen before, and catching them on our first night in Iceland definitely set some unrealistic expectations for the rest of the trip. 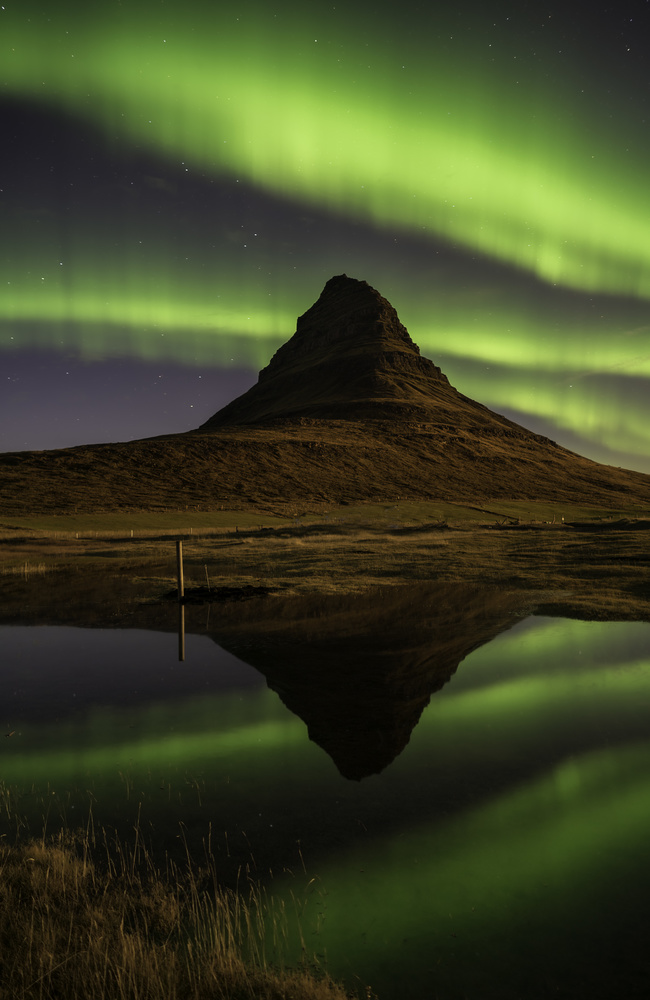 After an uneventful sunrise at Kirkjufell the next morning, we set off on a long drive to our next scheduled destination: Aldeyjarfoss, in central Iceland. Our goal was to make it there by the end of the day so we could shoot sunrise the next morning. We stopped several times during the drive for a hike, to fly the drone, for sunset overlooking a town, and many times just to take pictures on the side of the road. We even saw the northern lights make an appearance during the drive through the mountains late at night. We finally arrived at Aldeyjarfoss around 1 a.m., driving the final hour in pitch black down a narrow four-wheel-drive-only road. 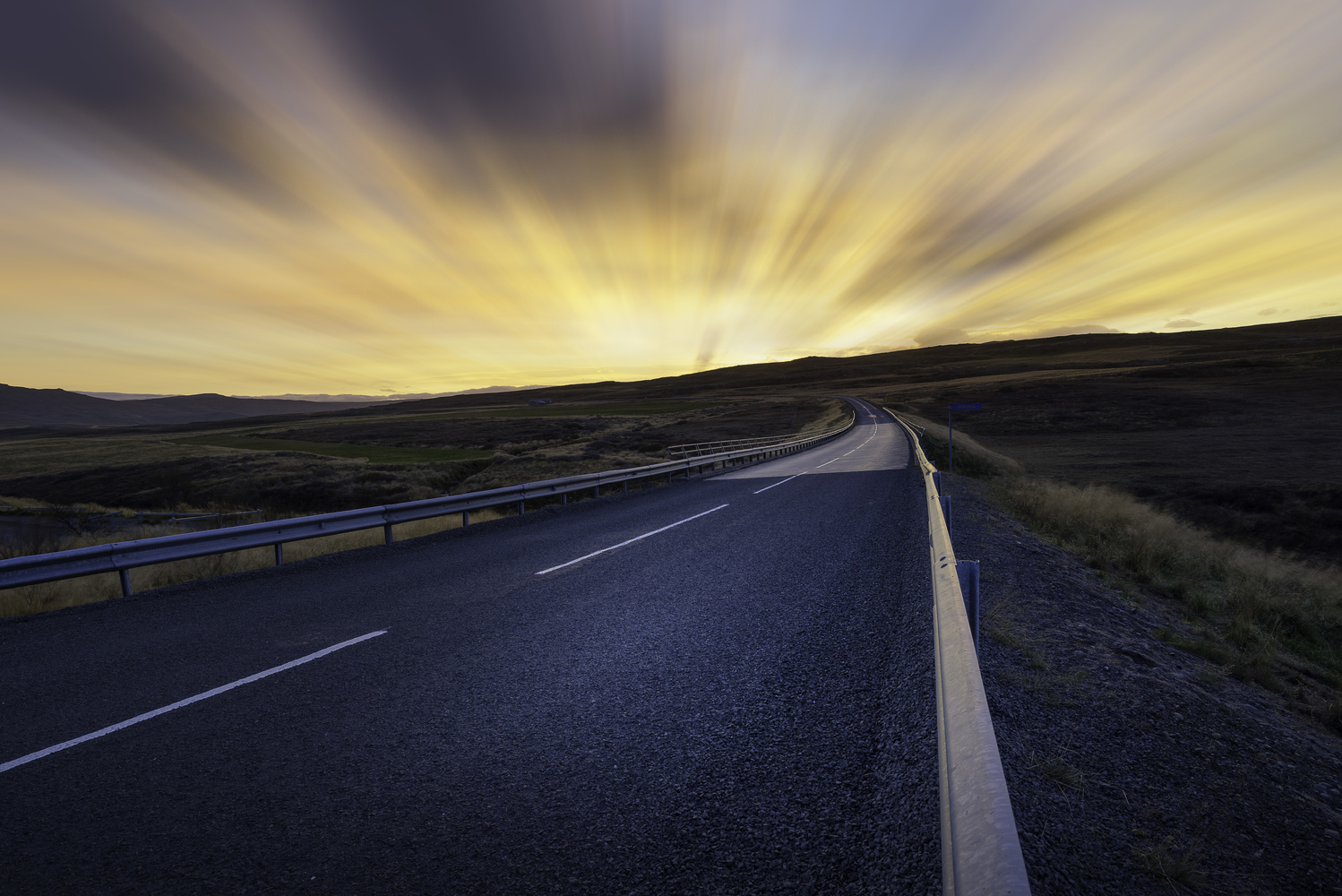 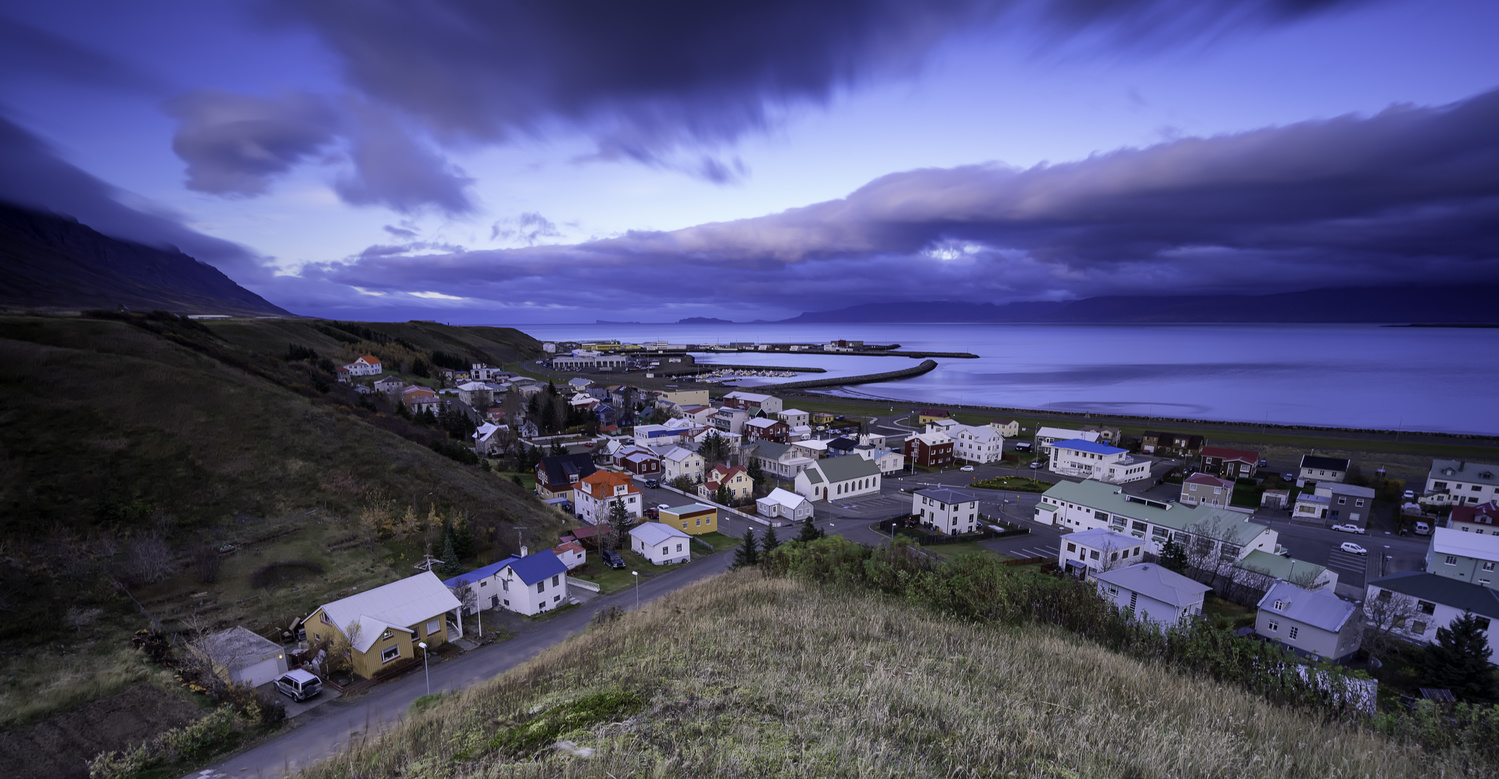 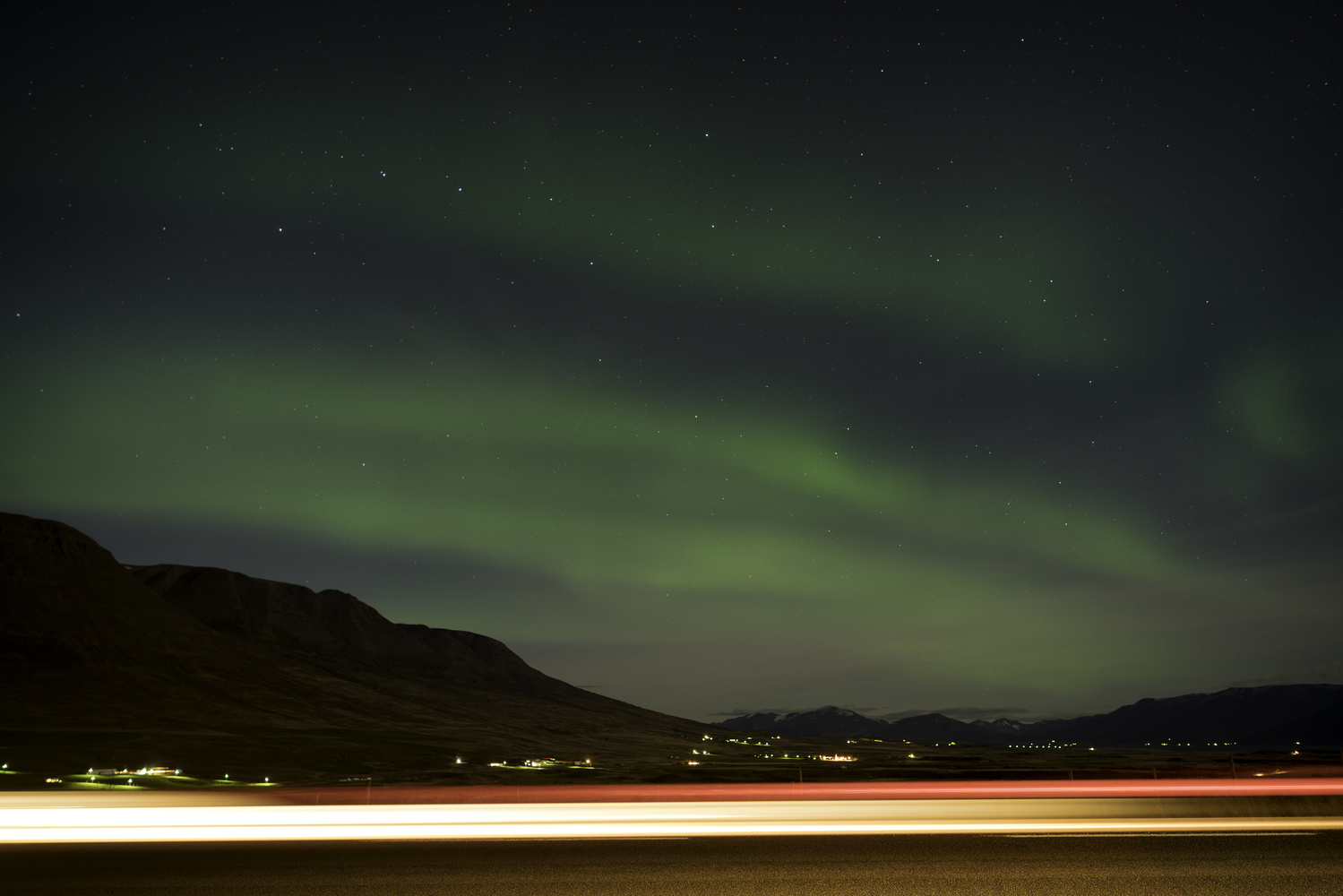 The next morning, we hiked down to Aldeyjarfoss in the dark to the sound of rushing water. Then we saw this: 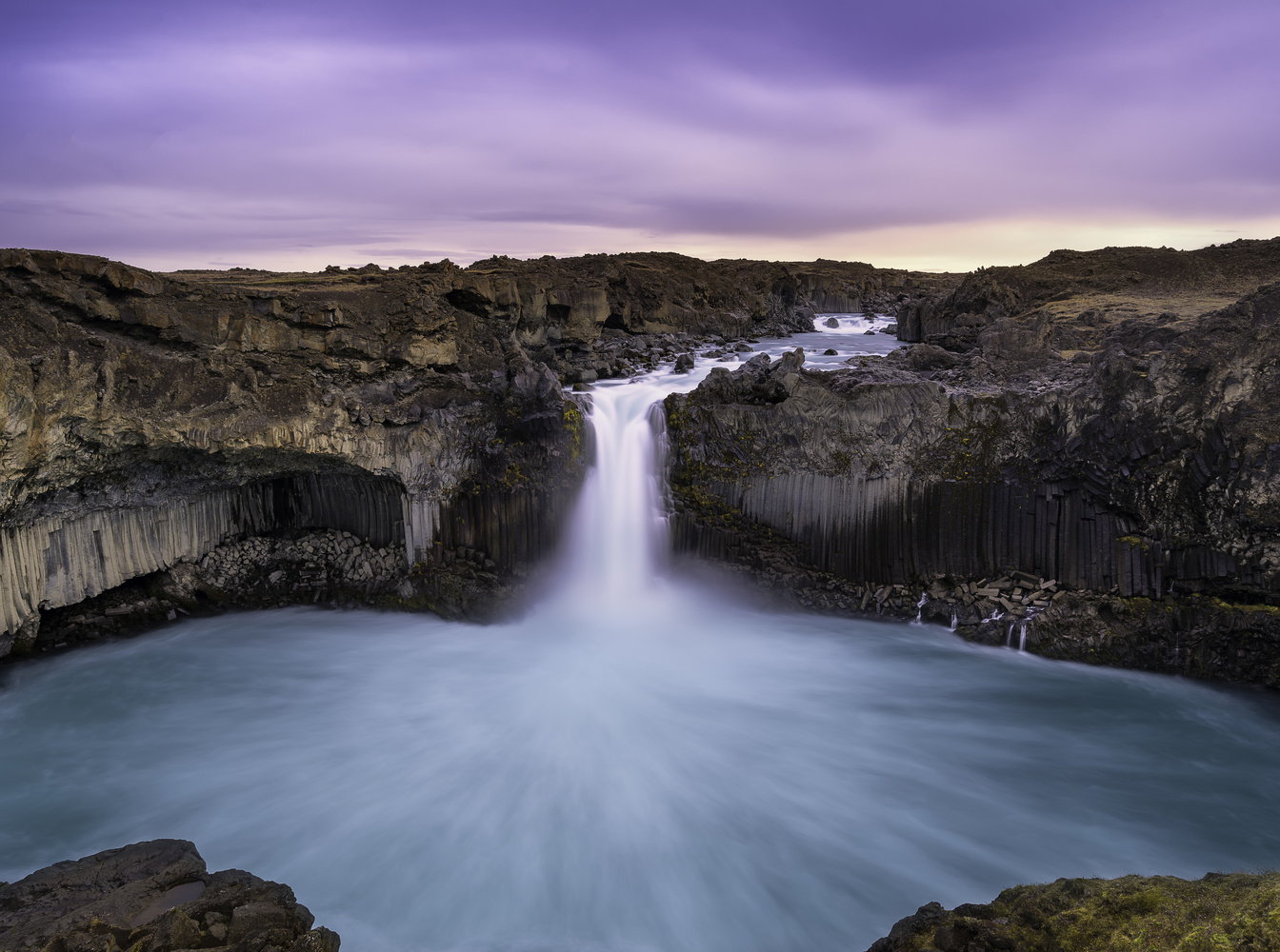 Aldeyjarfoss did not disappoint. And, we had the whole place to ourselves that morning. We flew the drone up and over the waterfall and shot the first hour and a half of sunrise.

After Aldeyjarfoss, we headed for another iconic waterfall: Goðafoss. Goðafoss, which means waterfall of the gods, is enormous. The pictures do not do it justice. Even though it was after 10 a.m. when we arrived, we were able to catch the tail end of sunrise, nicely positioned right behind the waterfall. 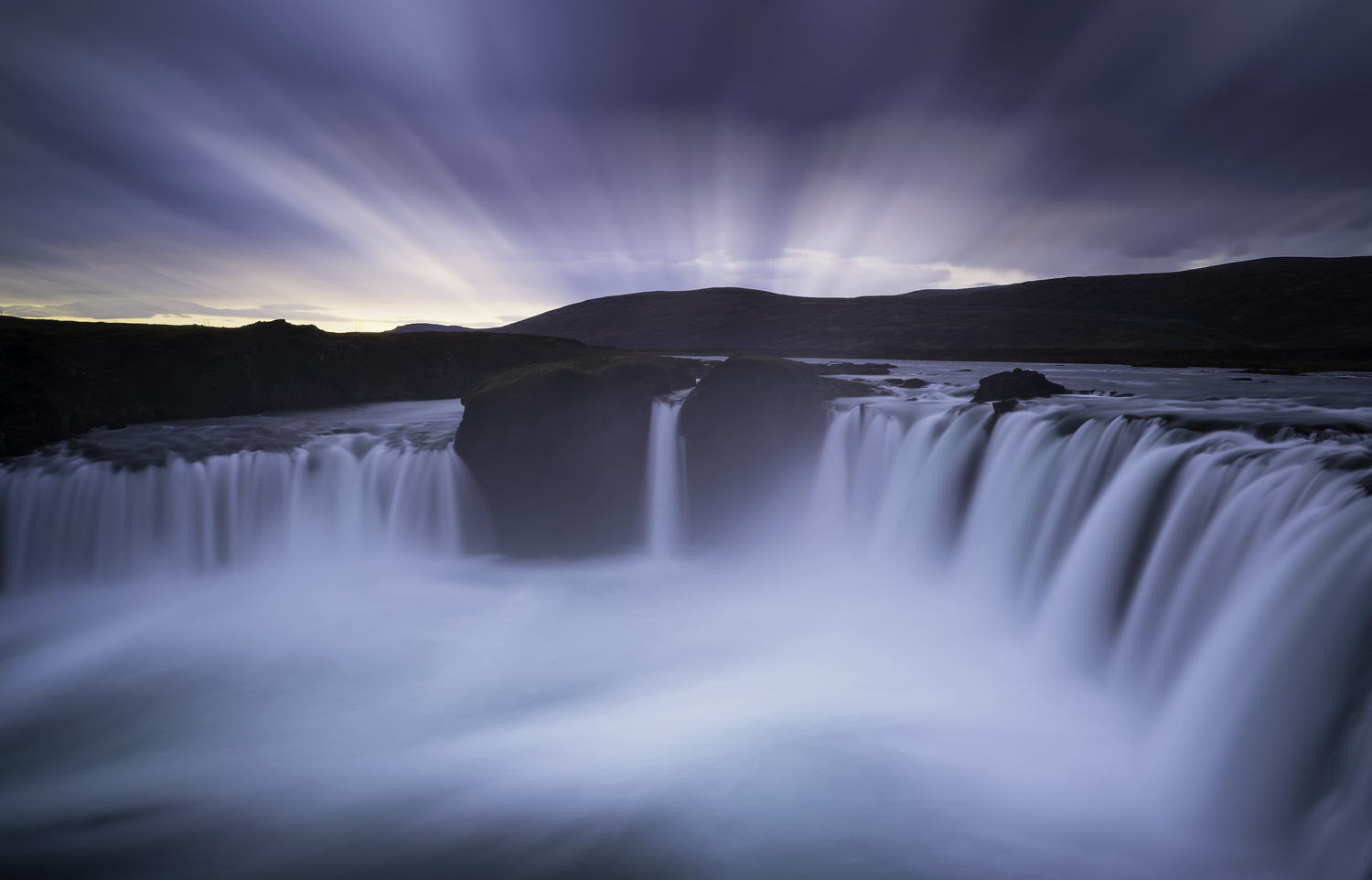 After shooting sunrise at Aldeyjarfoss and Goðafoss in a single morning, we had another long drive, this time to southeast Iceland. Up until that point, the weather had been great — sun and clouds during the day and clear skies at night.  That was about to change. But first, we stumbled upon some steam vents on what seemed like another planet, or at least a set from “Star Wars.” 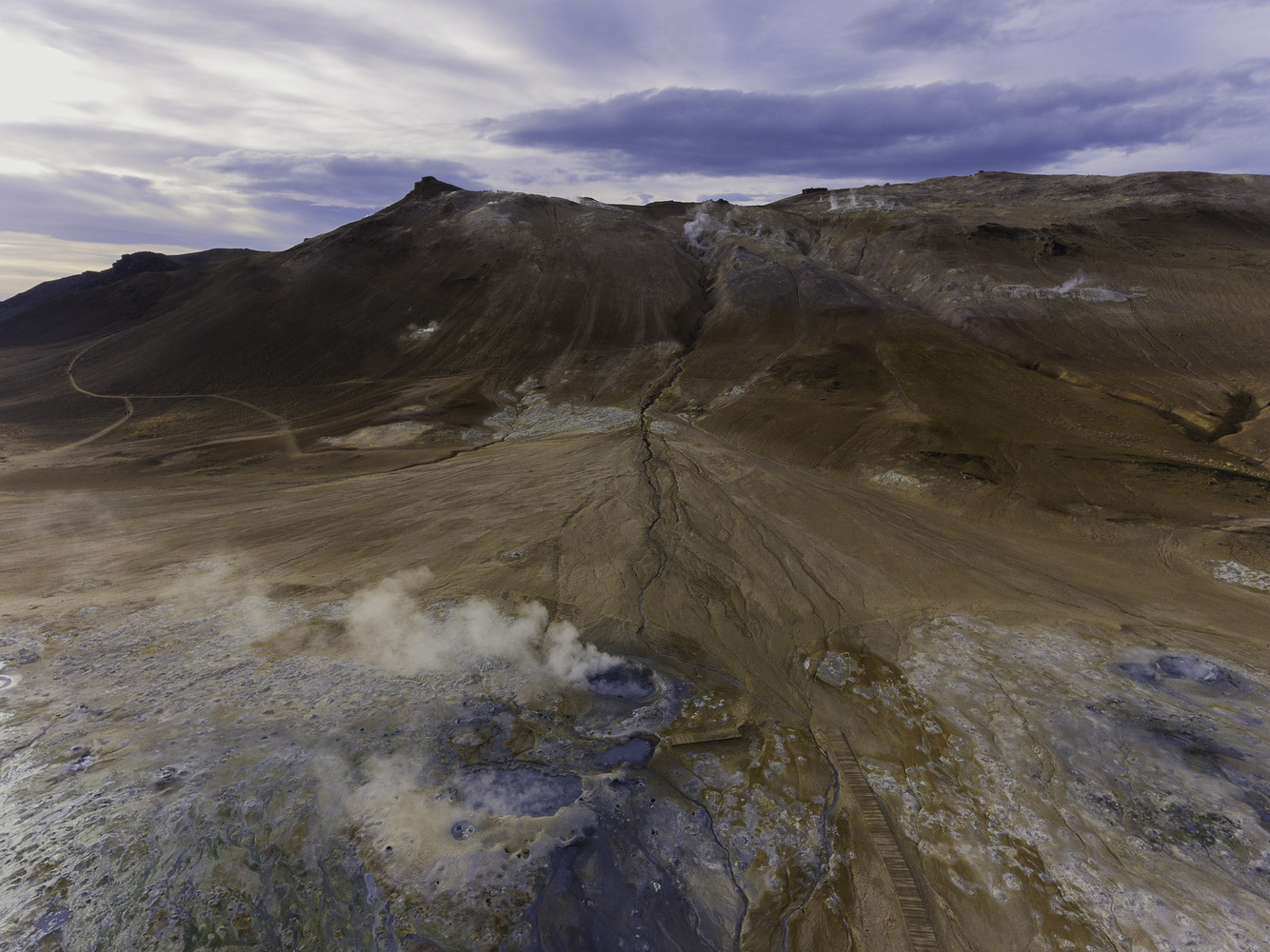 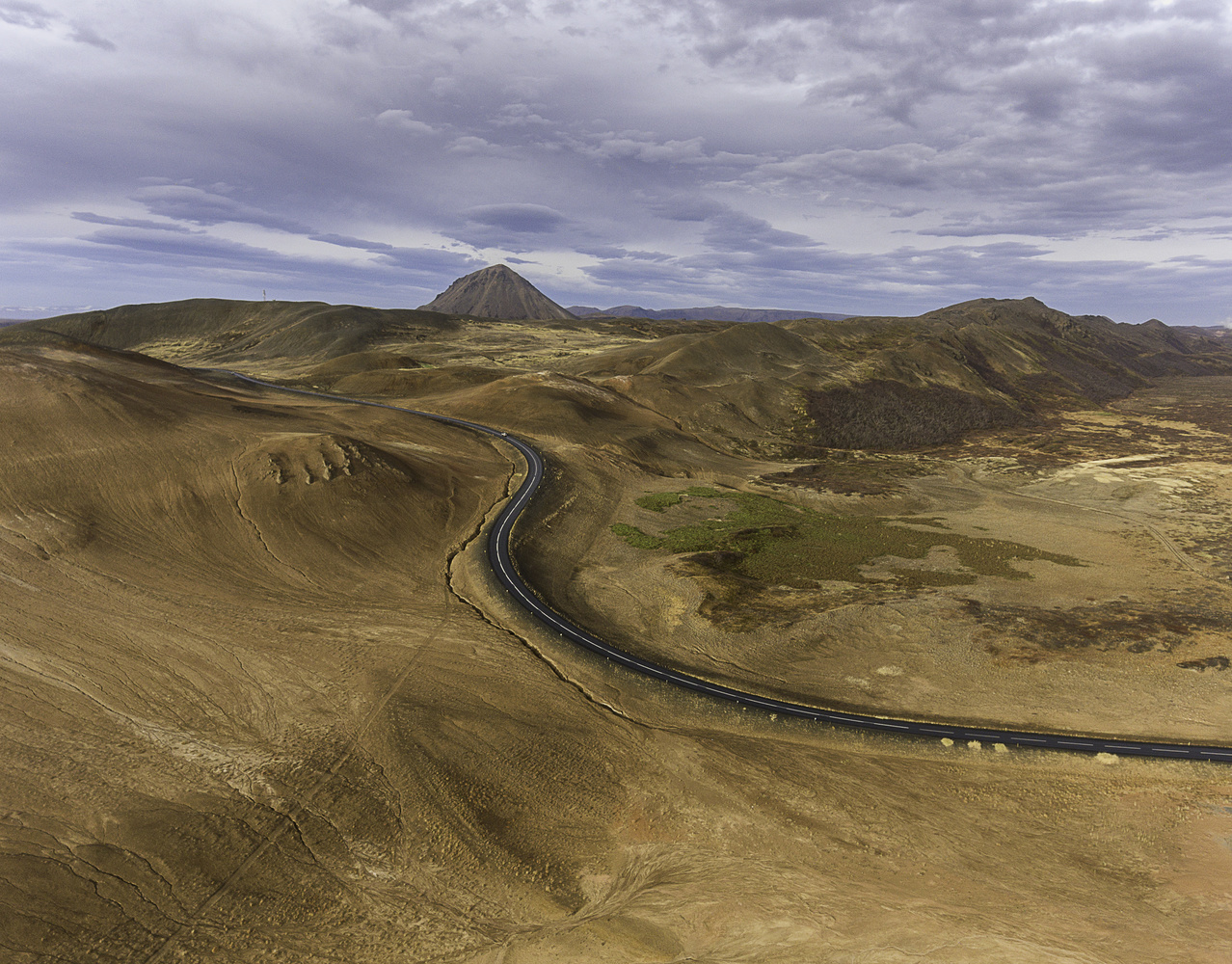 Then came the weather. First, a windstorm, followed by rain and then more rain. We drove through it, very slowly, until the driving got so bad we had to stop for the night. The camper shook throughout the night from heavy winds, but this was what we woke up to (we had no idea it was there when we stopped): 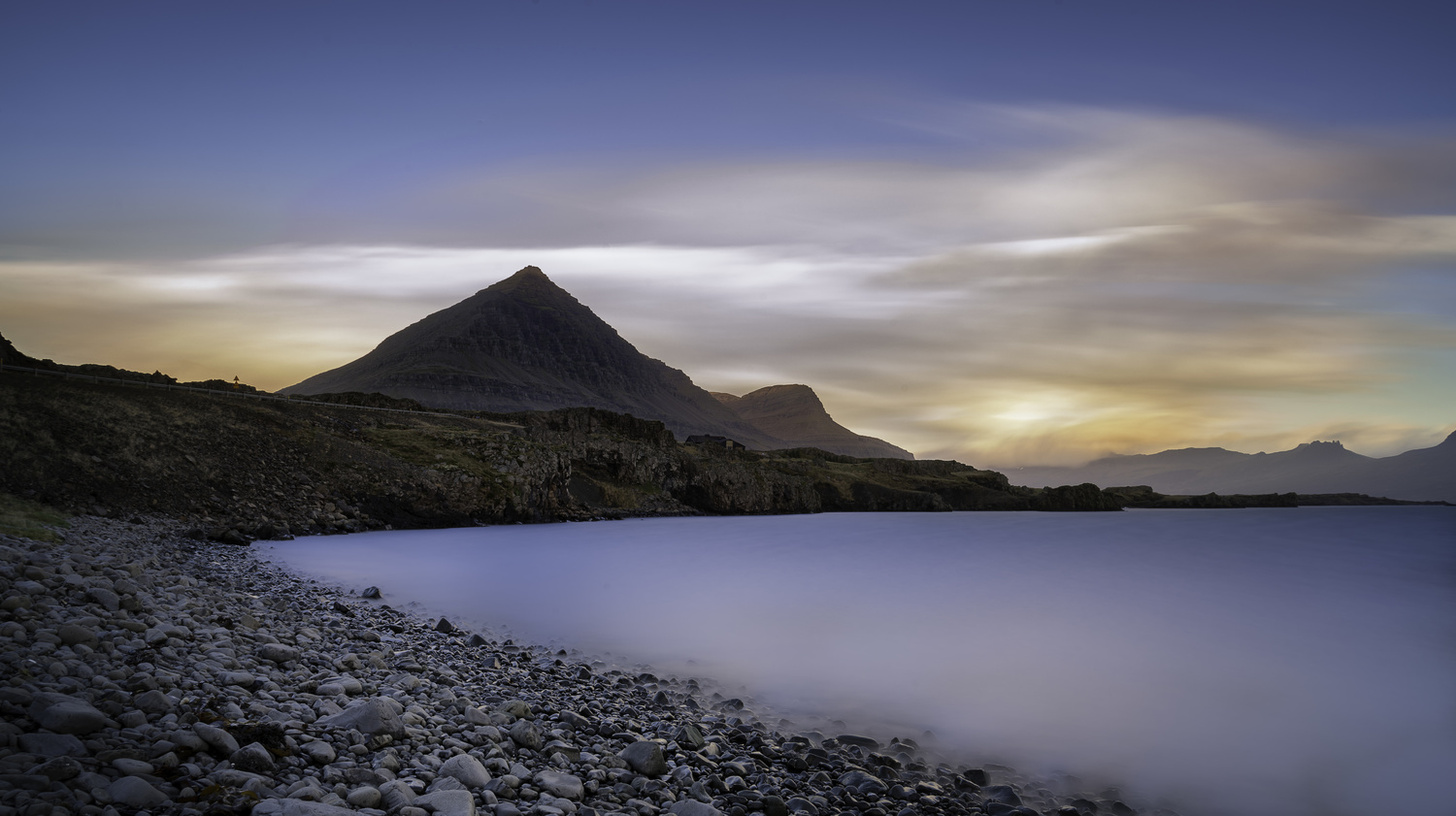 For the rest of the day, the weather was unpredictable, which is predictable for October in Iceland. It rained at Vestrahorn (so we ate sandwiches), but squeezed in as much as we could when the weather cleared for a few minutes. 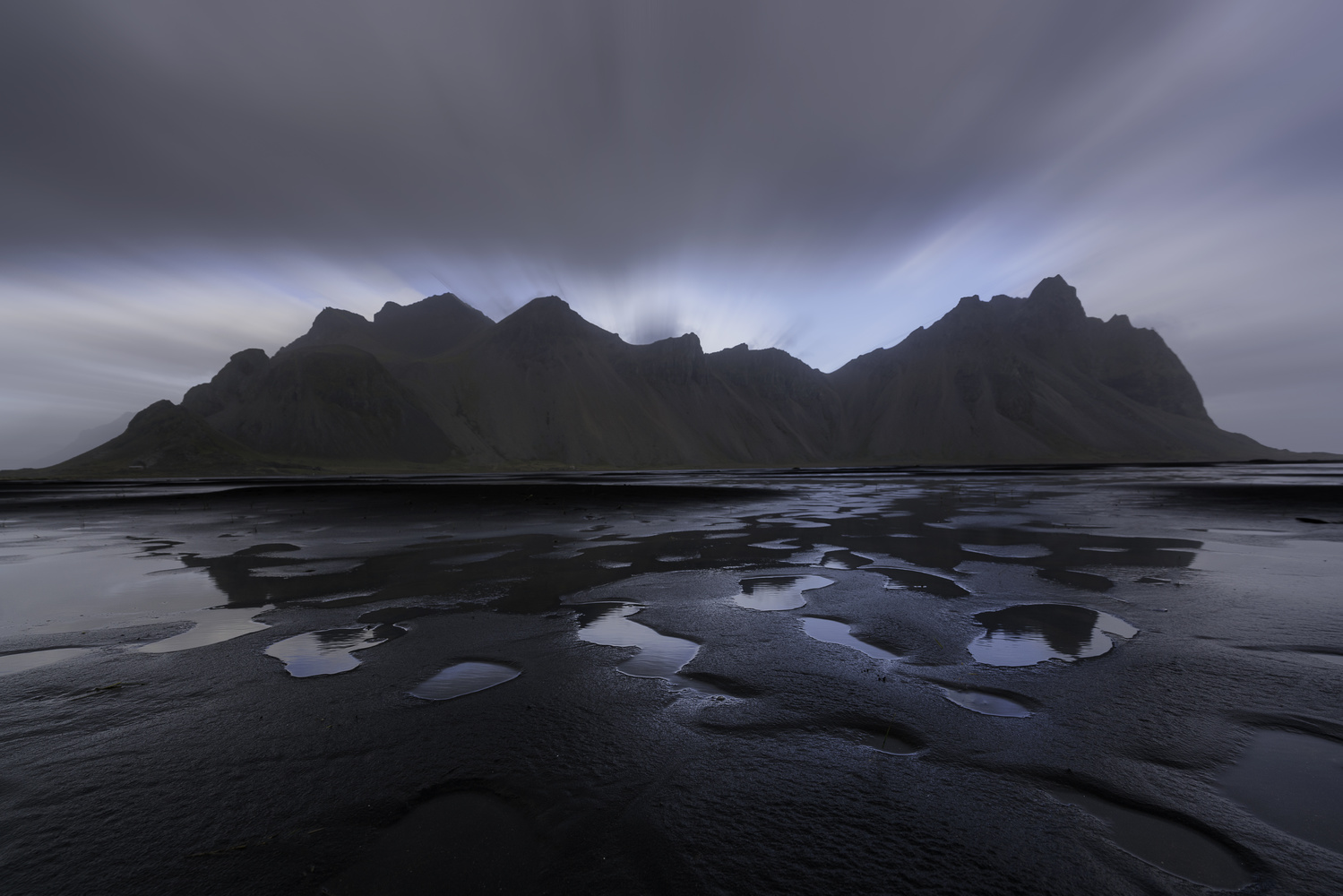 Then we got to Jökulsárlón, also known as the glacier lagoon. 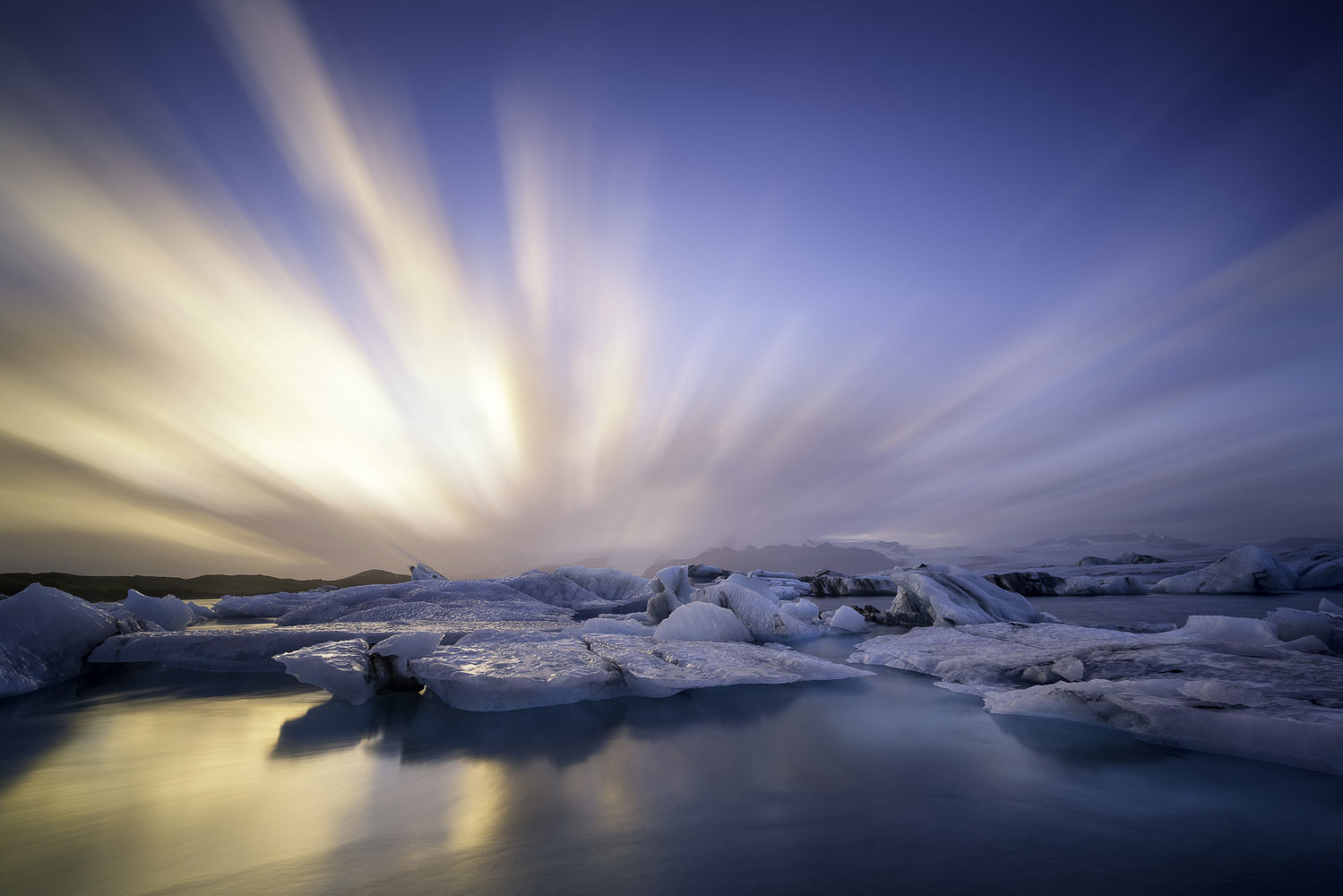 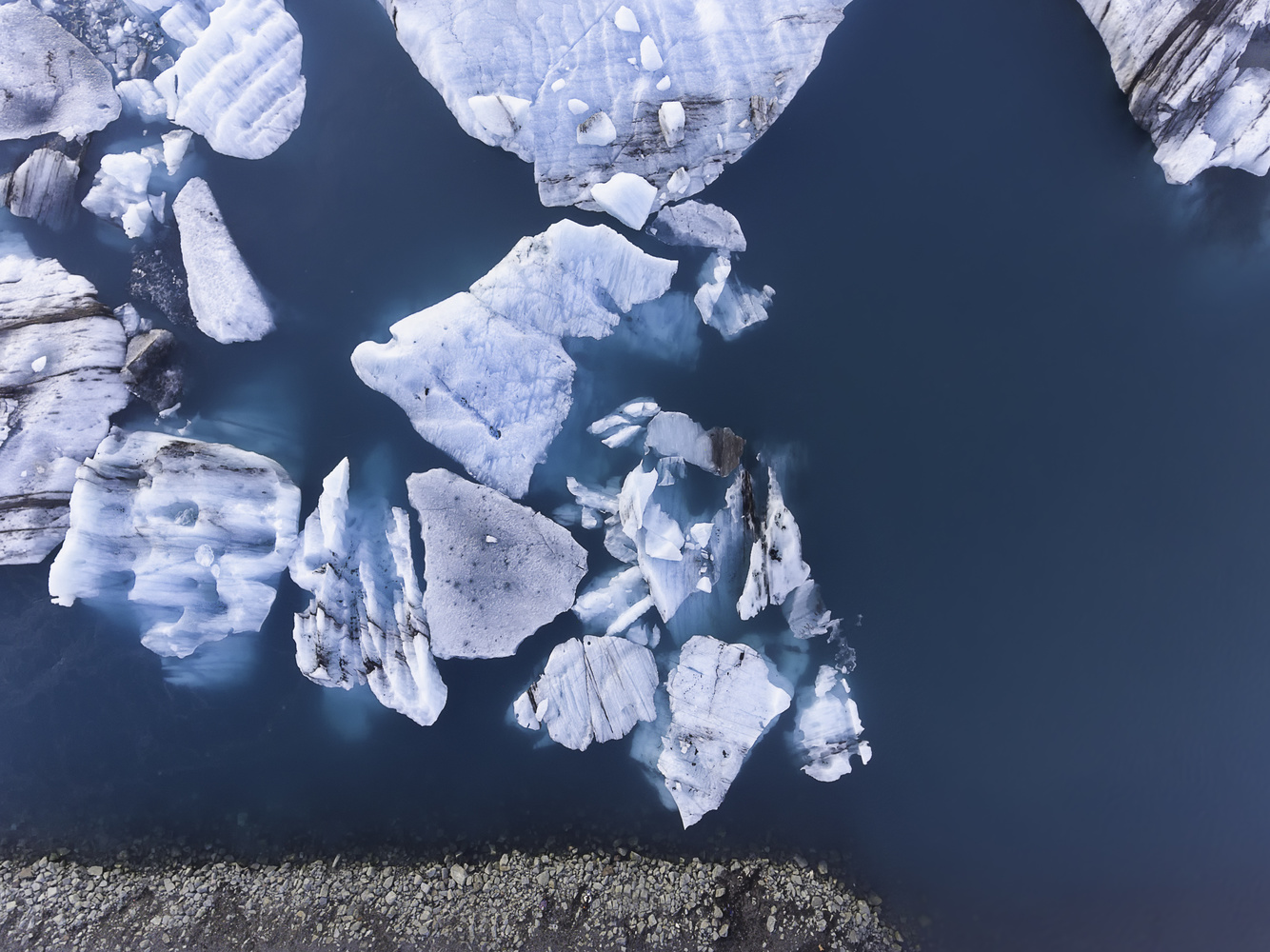 These are icebergs that break off of the Breiðamerkurjökull glacier and then drift into the lagoon before heading out to sea, only to wash back up on the black sand beach. This place was awesome. 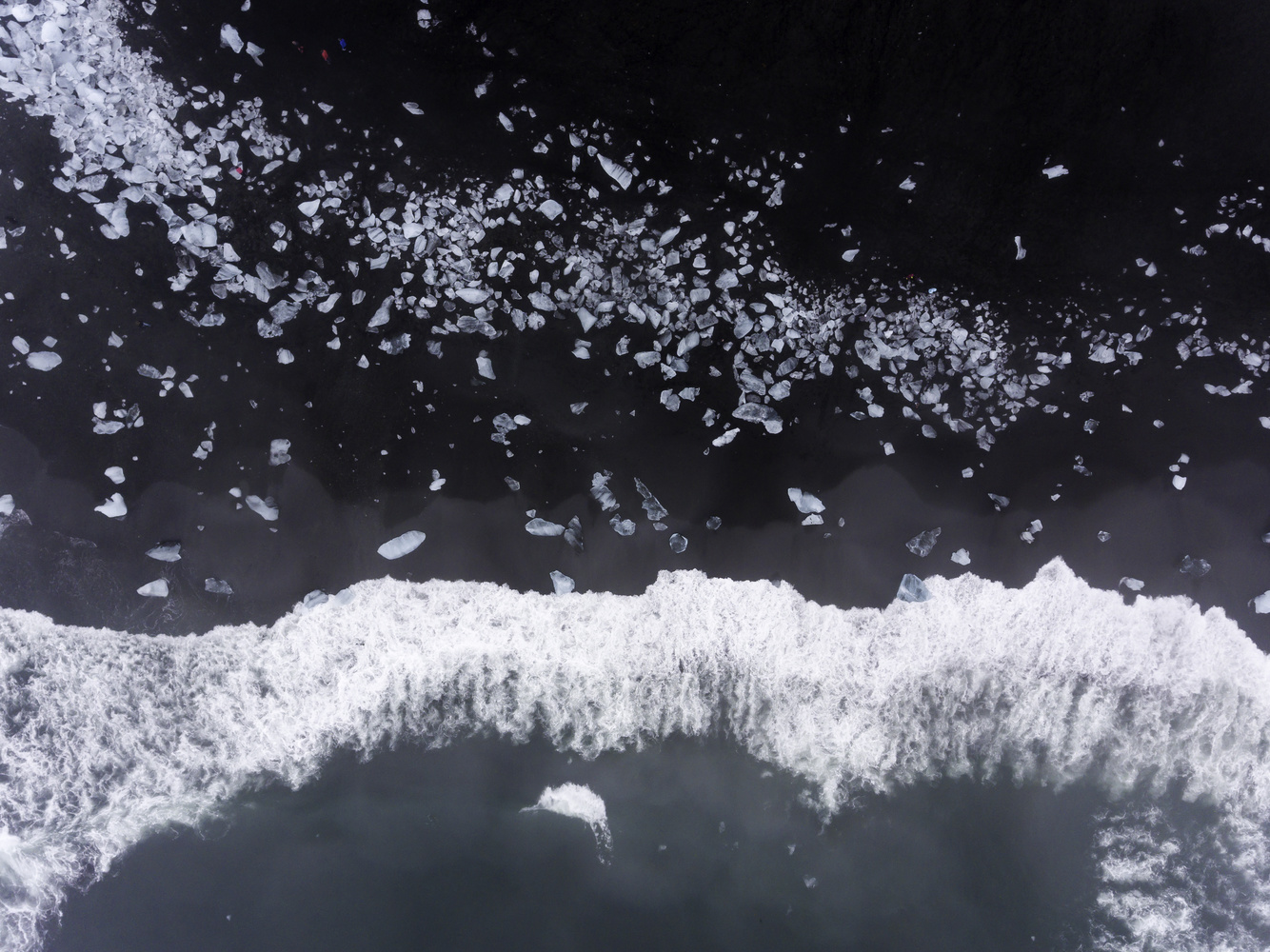 While the weather cooperated for a little while, it started raining right before sunset and never stopped. We couldn’t shoot the night sky, even though there was a strong aurora forecast, and we woke up to more rain and no sun. We had to scrap the morning shoot.

After another long drive, this one through dense fog and more rain, we made it to Vik for sunset. Although there was no sunset, we did get a break in the weather and used the opportunity to shoot the famous rock structures from the black sand beach. 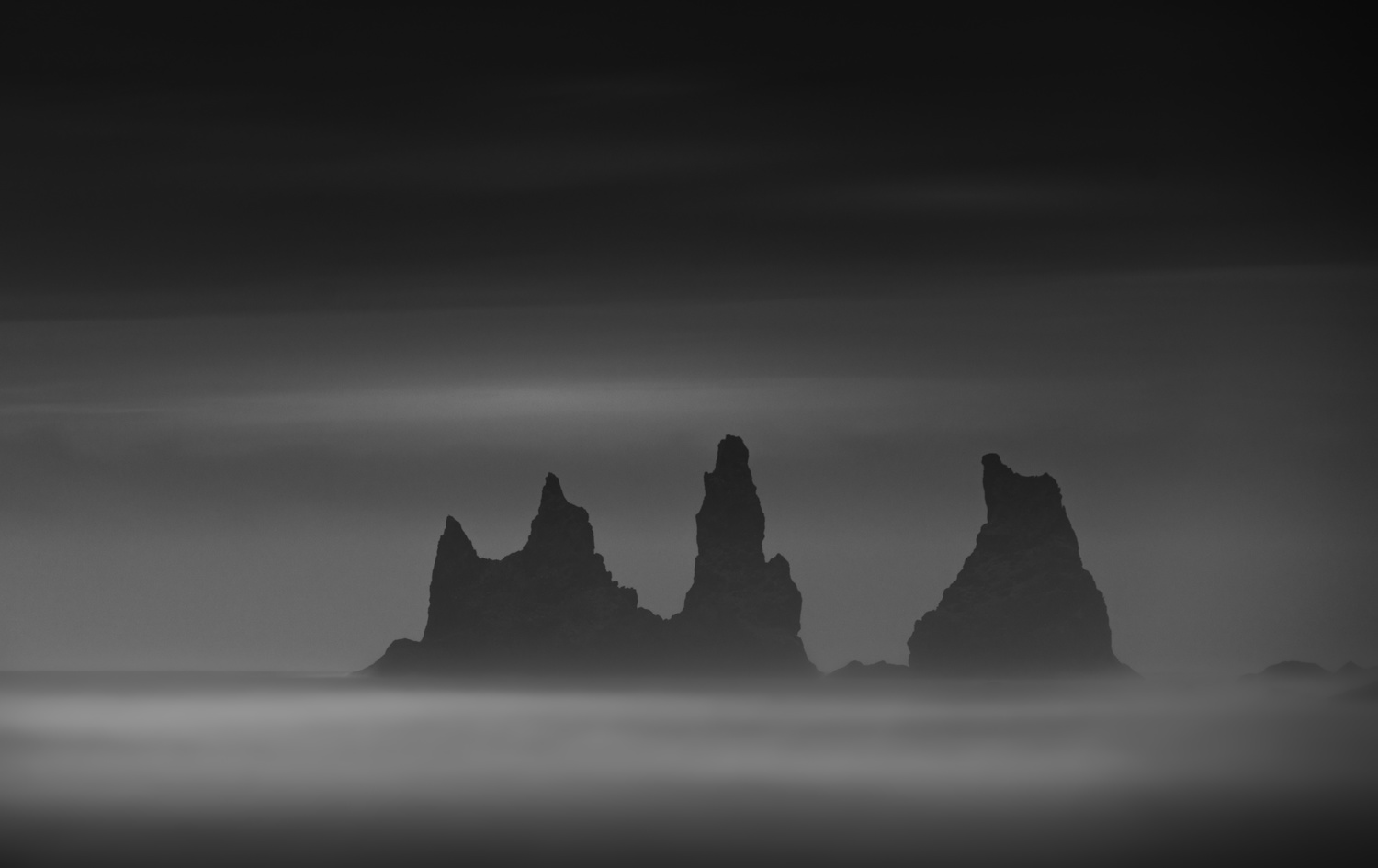 That night, we headed to Skógafoss, a 200-foot high waterfall in southern Iceland. We hoped that we would be able to shoot the night sky over the waterfall, but it never stopped raining. Although the rain continued into the next morning, we were still able to get a few shots at Skógafoss. 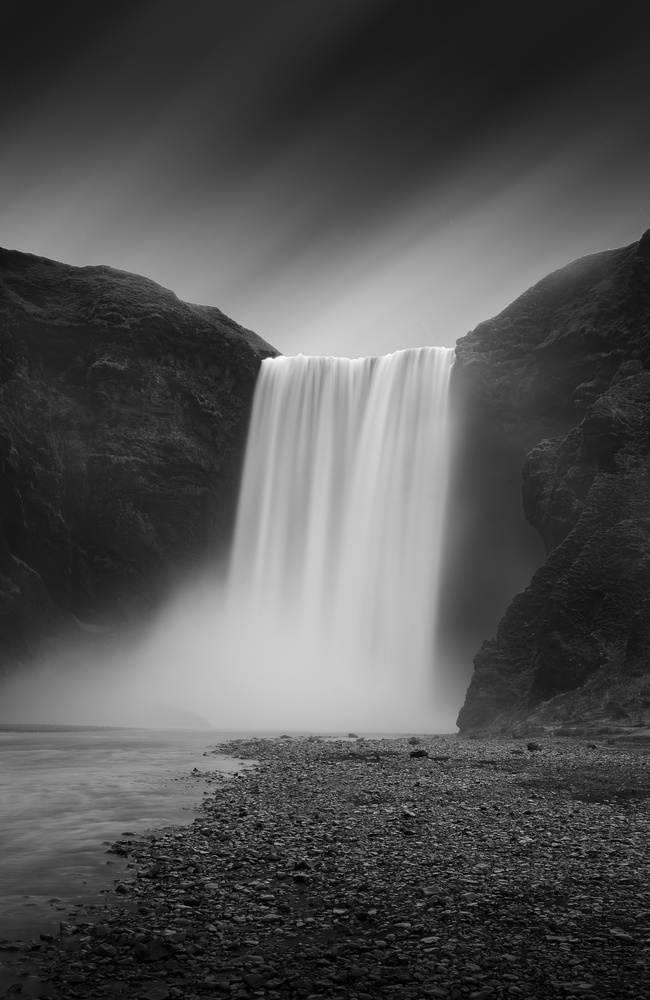 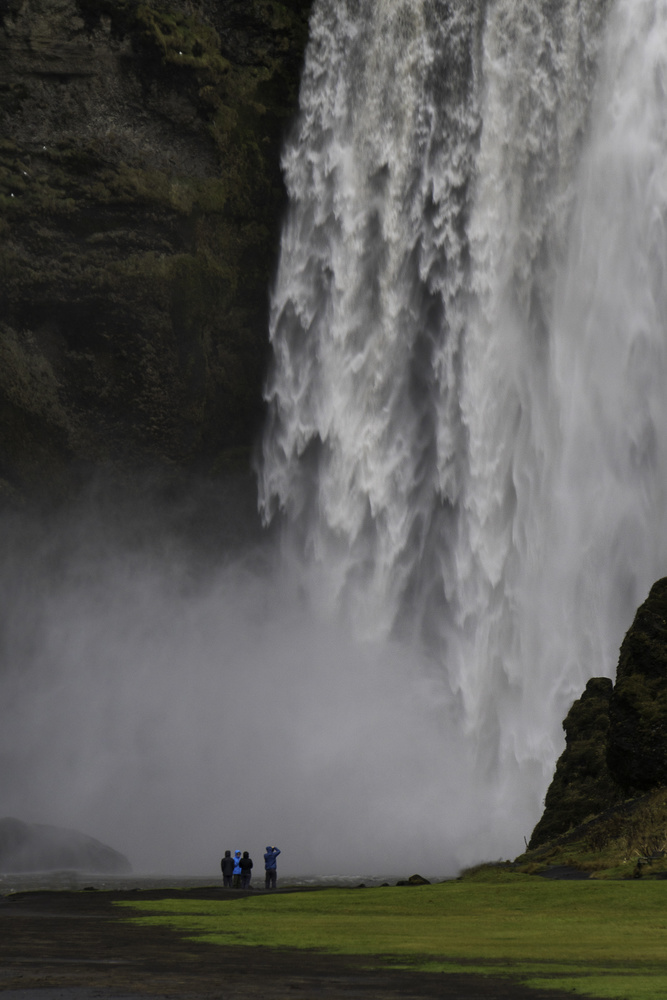 With the rain, the wind, and the spray from the waterfall, it made shooting really hard. We got wet. Our cameras got wet. The drone got wet. Then it started raining even harder. We went to get coffee.

For our final waterfall of the trip, we went to Seljalandsfoss. The rain, wind, and spray from this crazy waterfall made shooting almost impossible. I came away with very little, but got soaking wet.

We made it back to Reykjavik by mid-afternoon on our last day and were treated to nice long sunset over the city. 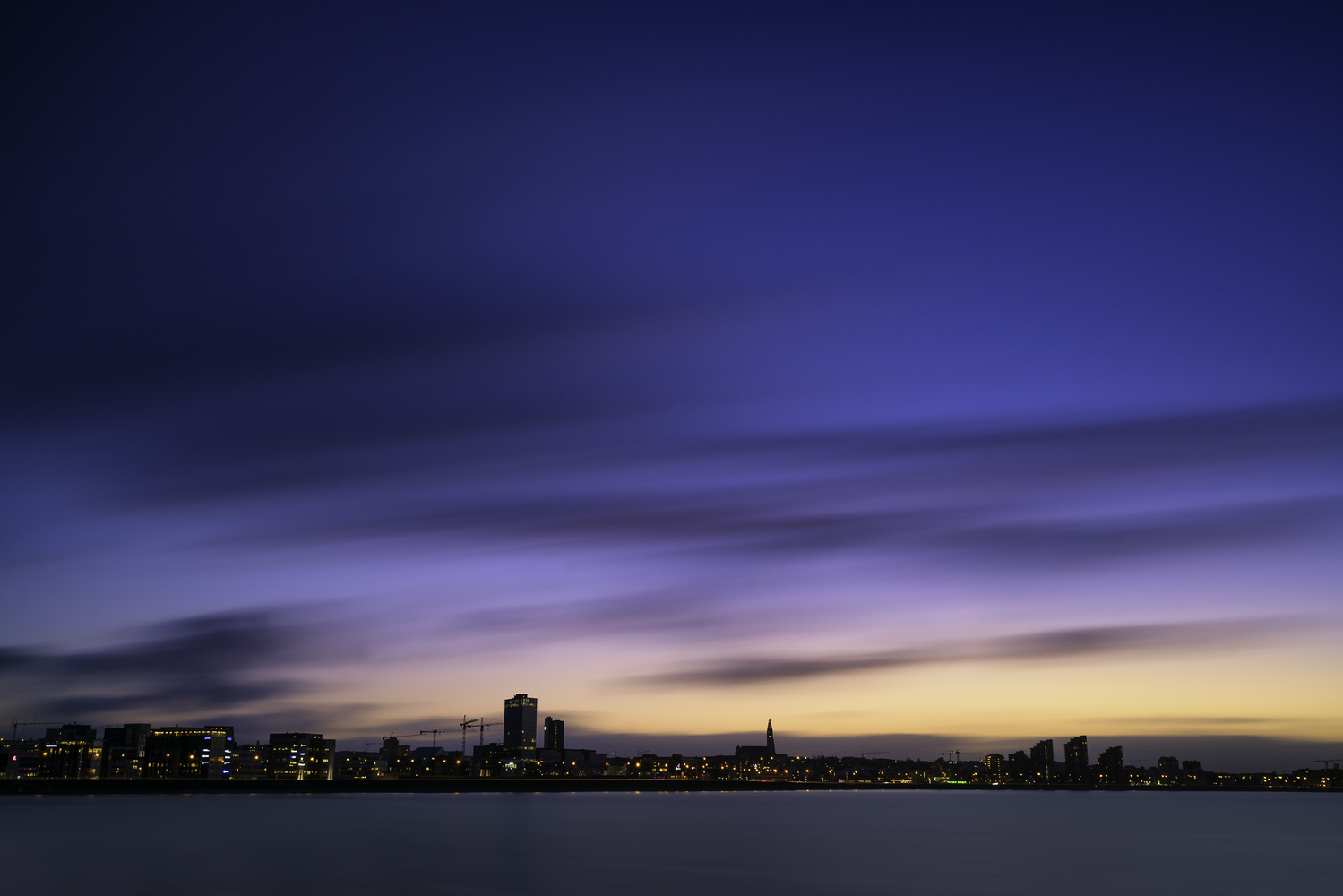 The final stop of trip was that evening at the Blue Lagoon, a really large outdoor geothermal spa. It was a great end to our incredible journey — an 1,800-kilometer journey that left both of us wanting to come back for more.

Here’s the video that Corey made of our trip (it’s even better when the sound is on).

Dan is an amateur photographer living in New York City who likes to shoot cityscapes, landscapes and long exposures. When he's not taking pictures, Dan is a partner at the law firm Dorsey & Whitney LLP and a law professor at Cardozo Law School.

Landscapes / September 21, 2018
No, Iceland Is Not ‘Over-Photographed’

love the pics, specially the B&W you made , they really give a special look to the falls.

The first two stops mentioned in this article aren't even on the Ring Road....

Amazing work! I really enjoyed it :)
By the way, I'm visiting Iceland this march and I would really like to know when did you drive the Ring Road. We chose to travel in march because it was the last month we could (probably) spot some northern lights, but the thing is we would love to rent a campervan but we really don't know if the weather conditions are going to spoil our trip. Thanks in advance and excuse my english!

Thanks, Jose. We were there in October. We had no snow issues. As you can see in the picture, we rented a 4x4 camper and had no issues. I hope this helps!

In March you can expect some winter conditions on the Ringroad, icy roads, snow and difficult weather. But you could also be lucky and have clear roads and great weather. There is no way of telling now how the weather will be. Only thing I can recommend is that you be well prepared, and be prepared for anything. Some of the images in this video are from locations that are outside the ringroad and are not accessible in March, Aldeyjarfoss for example can be very difficult to get to in March.

I hope you have a great time here, but plan carefully :)

I've added Iceland as one of my bucket list places to visit.

iceland, it's my dream, who knows if I'll be able to go there one day.

Beautiful work guys! I've been to Iceland several times, but I've never seen that wrecked ship before, where is it and what's it name? :)

I am not sure--we saw it on a back road and had to hike down to get closer, but did not get very close. It was a long drone flight to reach it.

It's such an incredible place. My two friends & I did a motorcycle trip around the ring road in August 2015 (we started going south, and then went around), and it was something I'll never forget. Can't wait to go back & visit! Here's a couple shots I got on that trip...
https://fstoppers.com/photo/85326 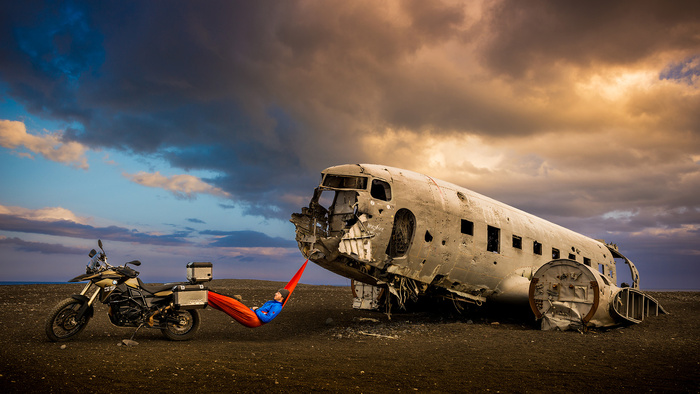 Thanks for the wonderful photos and story, Dan. I am curious, have you used a polarizer in these shots?
I am asking because I find it difficult to use a circular polarizer that I have with my 10 stopper.