Video has surfaced showing a drone flying dangerously and illegally close to military jets over a major American city.

The video was shot during the recent America Strong flyover by the United States Navy's Blue Angels on May 12. In it, the drone flies dangerously near six F/A-18 jets in formation as they are over downtown Detroit multiple times, with the last pass shown being exceedingly close. The other thing to remember is that most consumer drones have wide angle lenses around 24mm or 28mm, so the jets were even closer than they appear in the video.

This is certainly not the first such incident involving a drone flying dangerously close to aircraft, but I have to say that given the proximity to the planes, the major metropolitan area, and the clear disregard for regulations, it might be the most egregious I have seen.

Sincere thanks to Parrish Ruiz De Velasco for bringing this story to our attention.

In spite of your diatribe and insults, the fact remains this behavior is reckless and illegal and is punishable by law!

Please reserve your anti-government comments for a more appropriate site. In the United States of America our legal system still operates as a result of laws that are written and passed by elected government officials.

I’m sorry you find that something to make jokes or hurl personal insults about.If it is that objectionable to you perhaps you should consider running for office to change the system...or, moving to another, less “oppressive” country!

Wow are you a snowflake and sensitive! lol

You're right, this was reckless and illegal, NO ONE is questioning that. I simply said DANGEROUS is an exaggeration and nothing but a CNN clickbait headline. Which it is! NO ONE was in grave danger of death or injury. If you disagree, that's your personal opinion.

A jet engine ingesting a drone while in flight can absolutely knock it out which would absolutely create a dangerous condition. Particularly during close order high precision maneuvers. it's even more dangerous when you consider the fact that the operator has no clue what the flight path of the F-18s is going to be, and the whole jet engines are effectively giant vacuum cleaners.

Here's an F-16 ingesting bird on takeoff, and losing all engine power as a result.

If this video is real, dangerous, reckless, and illegal are all appropriate descriptions.

"Can".....key words bud. At no point was it even close enough to causing real damage. The drone never even moved from the shear force of wind. Reckless, illegal, dumb, sure. DANGEROUS, no. But that's my opinion, don't like it? I don't care haha

What is the difference between reckless and dangerous? Don’t they often reach the same conclusion? Also you are a thrill seeker. Great. Maybe the drone operator is too. Are the pilots? You may think they are but they are in a very controlled environment. Until a random drone recklessly enters their flight path. Then it’s not their decision anymore. Why is that ok? To take away the pilots decisions?

I think the point you are grossly missing here is that this was pure luck. The operator had no idea where those planes would be and if the drone had been in the path it could have been deadly for both the pilots and the people below. That’s pretty dangerous to me. And reckless.

It’s not the same as you deciding to scale a building a take pics with your feet hangin off. Sure you might kill a pedestrian walking by. Maybe. If an f-18 crashed into another one avoiding a drone over a populated city there would be more then one death. And tons of collateral damage.

And let’s just say this too....TRUMP would be the FIRST one to say what a menace these drones are if a blue angel got downed over Detroit. Then he would move to BAN all drones and use federal regulations to do it.

And you would probably back him on that!

And the next big political rivalry would dems for drones and Trump’s for banning them. (....Republicans don’t exist anymore). You and I both know that!

“At no point was anyone in harms way‘

I am probably going to regret asking you this, but in your opinion as a self-avowed thrill seeker and adrenaline junkie, at what point would you determine that someone was in harms way in this situation (6 F/A-18 jets flying at very high speed in a close precision formation over a densely populated metropolitan area)?

If you've ever flown a drown you know how sensitive they are to wind. At no point did this drone even stutter from the wind force given off by these jets. I'd like to think (I truly don't know), but if a jet comes wizzing by you at 600-800mph that it would provide an extreme force of wind thus easily sending a drone into a crazy wind tunnel. So in my extremely uneducated theory of wind force, the drone could not have been close at all. Bc I know my drone goes side to side all the damn time when even a little wind comes through haha.

I 100% think this is reckless and dumb and I personally would have never done it. I just think dangerous is far fetched and we as a society are starting to use these words to over exaggerate the truth and make things seem so much worse than they really are just to really spark an emotion and get views.

So if it was 3 feet away it would safe? You have no concept of what it takes to fly a formation.

What's that saying, "You can win by an inch or a mile, doesn't matter because you won!" Same concept here, there's no danger until there IS DANGER. 2ft, 50ft no danger! Because NOTHING happened! There is no immediate danger until that drone is directly in its path and about to collide.

Drone owner operates in a way that shows intentional disregard of FAA rules and significant danger to the pilots (and crowd below) in Michigan. Government's response -- so far nothing.

Barber opens his shop with minimal danger to others in Michigan. Government's response -- close his shop, revoke his business license, and threaten to arrest and jail him.

Is it just me or is there a foolish lack of proportionality in society today?

Agreed. The drone operator should have his gear confiscated, be fined and advised he will be incarcerated if he/she violates the law again as well!

Old saying we have heard since we were small children..”two wrongs do not make it right”!

Federal law applies to drones, not to barber shops. State law does not apply to drones. The local library has various rules and regulations, but they apply to neither.

Fair enough. I point out that government can move quickly when it wants to...

Such as when combating a disease pandemic.

As a point of reference, this guy is not a Part 107 commercial certificate holder. He's just a guy who bought an expensive toy and disregarded any FAA rules regarding the flight.

How do we know what is going on behind the scenes at the FAA? They may already have him in custody for all we know.

A new F/A-18 will set you back (or, the taxpayers rather) a hefty $70m. I'm not implying a plastic flying toy would've brought a military jet designed for combat down, but it would've probably caused internal damage to one of its two engines if it were sucked in. I'm happy that DJI instituted a firmware function that disables their drones from flying in certain types of airspaces. Now, if they could only interpret temporary flight restrictions (TFRs), that would go a long way towards stopping reckless behavior such as this. Unfortunately, it usually takes a major accident before these things become heavily regulated.

78 of the real murder hornets on order as of March 2018. Delivery scheduled by 2021. Next time tell the Navy to subscribe to Boeing Prime for 2-day delivery.

I'm not sure about all the fuss.
On this screen capture; you can see that the drone is actually flying LOWER than the tallest buildings we can see.
(video at 0.30 and at 0.36 ) 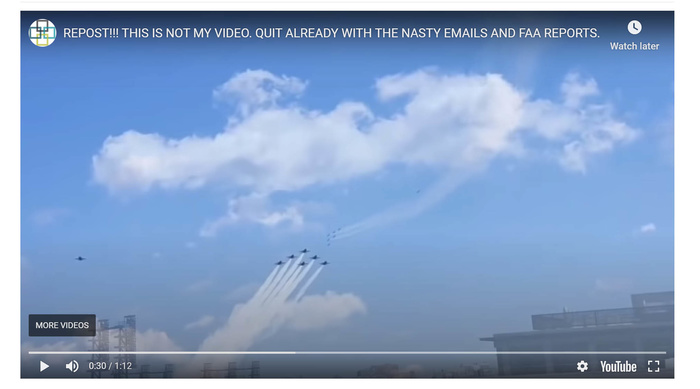 And the google 3D view of Detroit showing how tall are the building of the city.
He may actually been at this altitude.
I'm not defending the guy if he did something he should not, but just presenting some other perspective to the video. 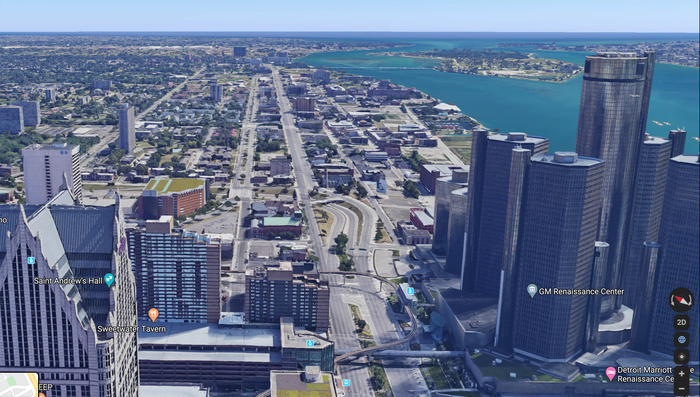 I'm not sure what you're trying to get at, the Blue Angels will fly lower than some buildings when doing performances. Temporary Flight Restrictions (TFRs) regulate airspace above ground level (AGL). It doesn't matter what the height of the surrounding strcutures is.

Exactly. I saw the Thunderbirds perform while I was stationed in Panama and a friend of mine has photos of them "from above" that he took from the roof of his apartment building. That particular show ended early due to a bird strike by one of the F-16's.

Maybe the Navy should contact this guy as he was able to do this with a great artistic capture of the blue angels, instead of prosecuting him make him a leader in how to do things, he is obviously talented with the drone why punish that talent instead of develope it