Seascapes has always fascinated me!.I do not have a preferred vision for seascapes; I love both minimalistic and simple versions, as well as those highly dramatic ones full of action and movement. Here, I will share some of my tips on creating the latter.

Primarily, you have to stay safe around the sea. At many places I photograph, tall and powerful waves come with the package. Before even approaching, you should read the sea first. For dramatic seascapes, you often want to get close to the sea, which puts you in potential danger! Waves comes in waves, which means you often get 5-7 big waves followed by 5-7 small waves. Depending on where you are, the conditions and the patterns might be different. It is important to be able to foresee these patterns, as being close to the sea the waves can push you into razor sharp rocks, drag you out, or push something towards you. Icebergs or huge tree trunks can weigh several tons; you do not want to stand in the way of one of those.

The weather obviously plays a huge role. I prefer either golden hour light or stormy weather to get the most dramatic conditions. Shooting into the sun or having it to either side of your scene close to the horizon can get the waves and droplets lit up from behind, creating a beautiful and dramatic effect. This effect is strongly enhanced if the background is dark, such as a rock or cliff. 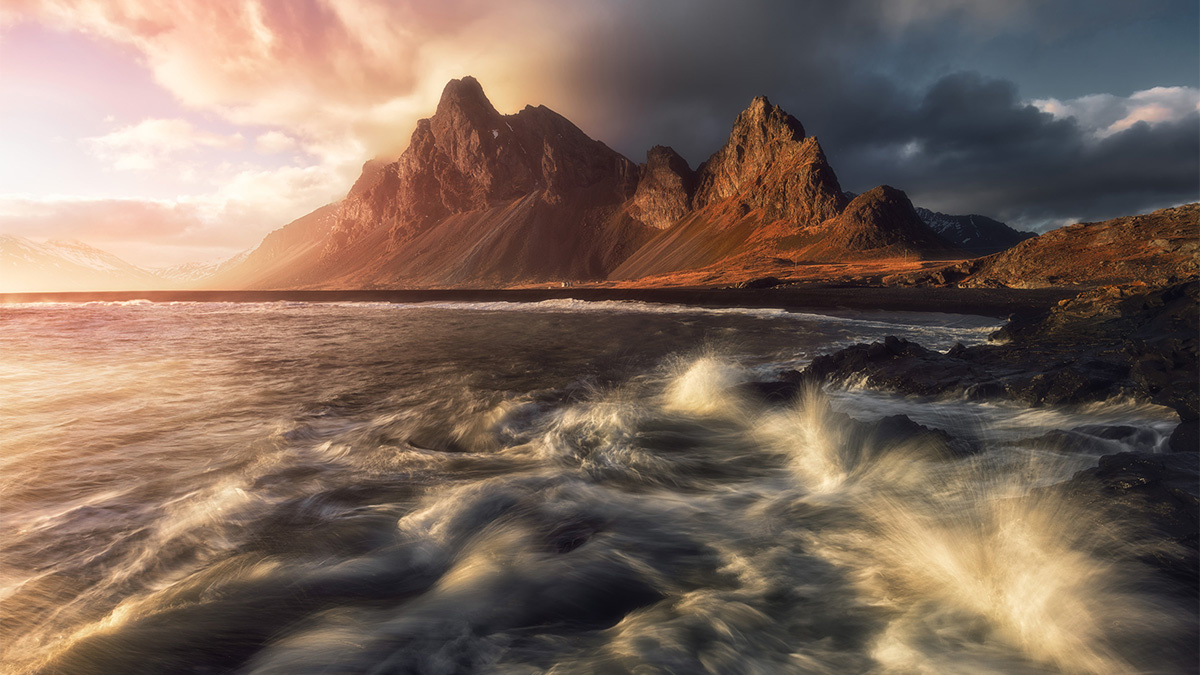 During midday, you can still get some interesting photos, although I usually stay away from that kind of light. If, however, you have a texture-rich, cloud-covered sky, this can add a lot of mood and drama to your photos. It also helps lowering the amount of ambient light and contrast in the scene. 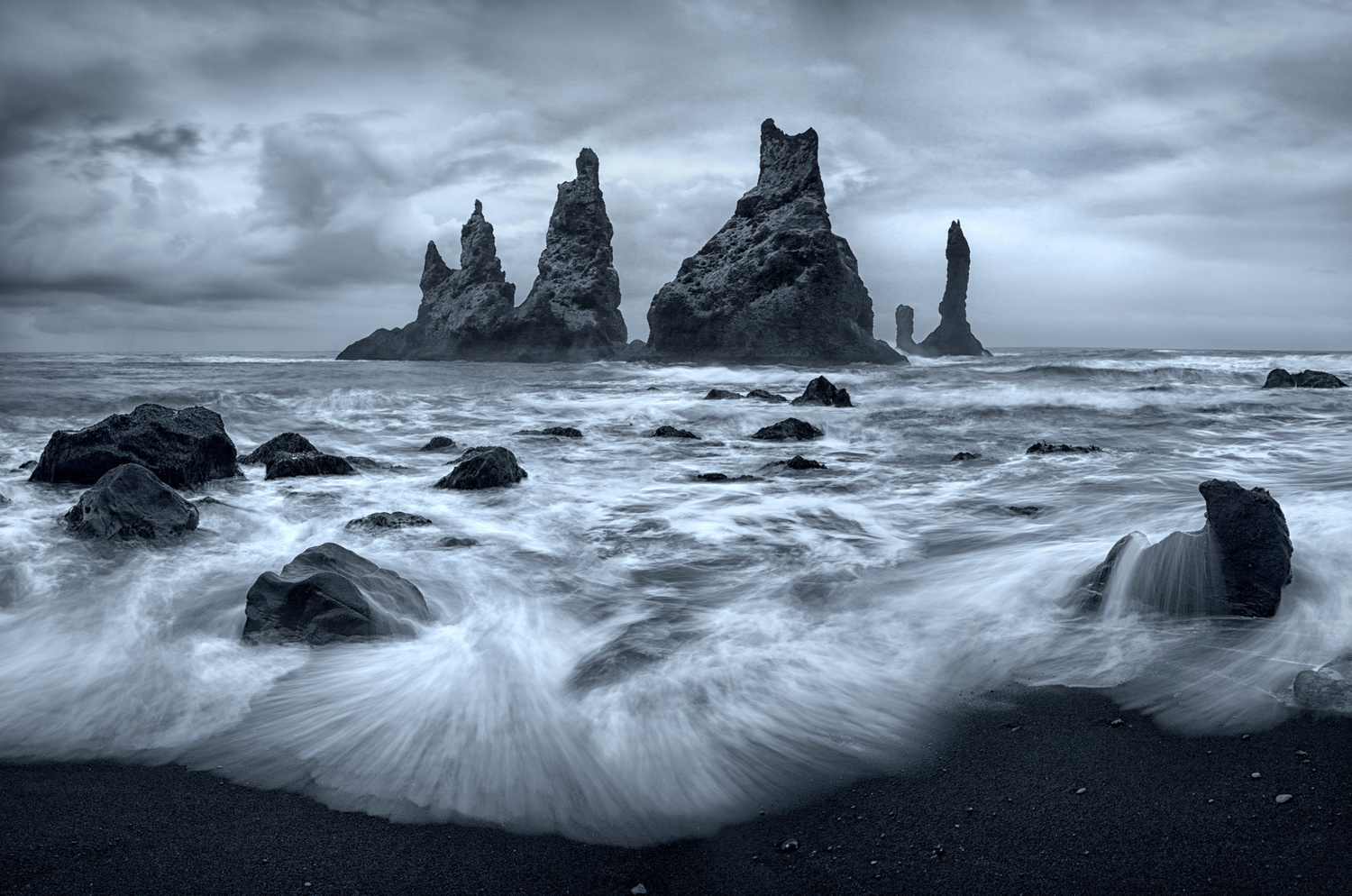 The shutter speed is the exposure factor that has the largest influence on your photo. I personally prefer the look of short long exposures. I normally photograph with a shutter speed between 1/3 of a second all the way up to 2 seconds. Smoothing out the water too much creates a calm effect, which is something I do not want making dramatic photos. I want the waves to look like water and I want the texture of the breaking waves to support that look. When it comes to the aperture and ISO, I do what I can to get the most optimal settings: as low an ISO as possible and an aperture as close to the sweet spot of the lens as possible, without sacrificing focus, usually between f/8 and f/16. I’ll often have to attach a 6-stop or 3-stop filter to get the desired settings.

Continuous fast shooting is an important setting. It is very hard to time your photo correctly and get the shot of the wave exactly when you want it. I often shoot in the fastest continuous shooting mode my camera provides. I get many photos, but among the many useless photos, chances are I caught the optimal moment. 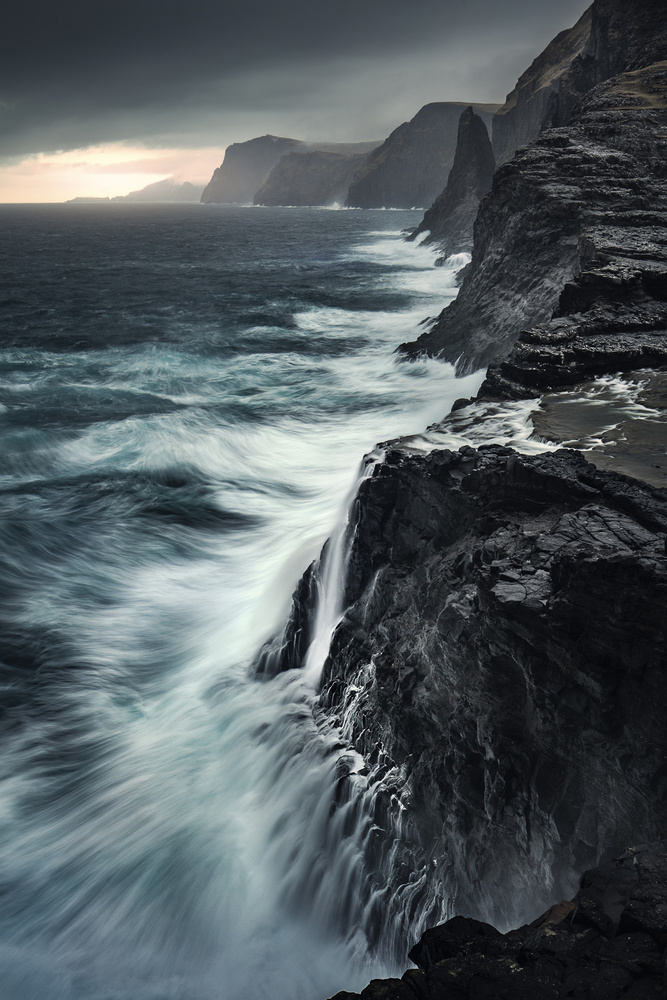 Depending on the scene, there will be a huge difference in the look when you time your shot. I normally teach people to photograph the waves when they retreat to get those long beautiful streaks you know from the Ice Beach in Iceland. 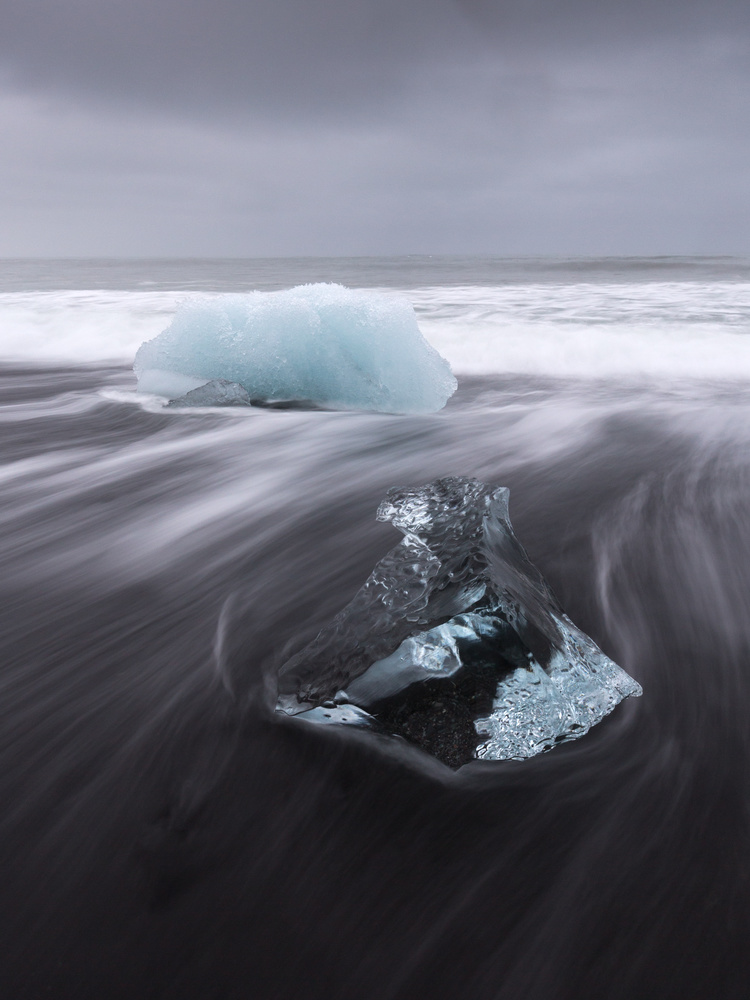 For the dramatic photos, however, I would suggest playing around with incoming waves. When the waves break or clash towards some rocks, the splashing water often creates some beautiful patterns and streaks. 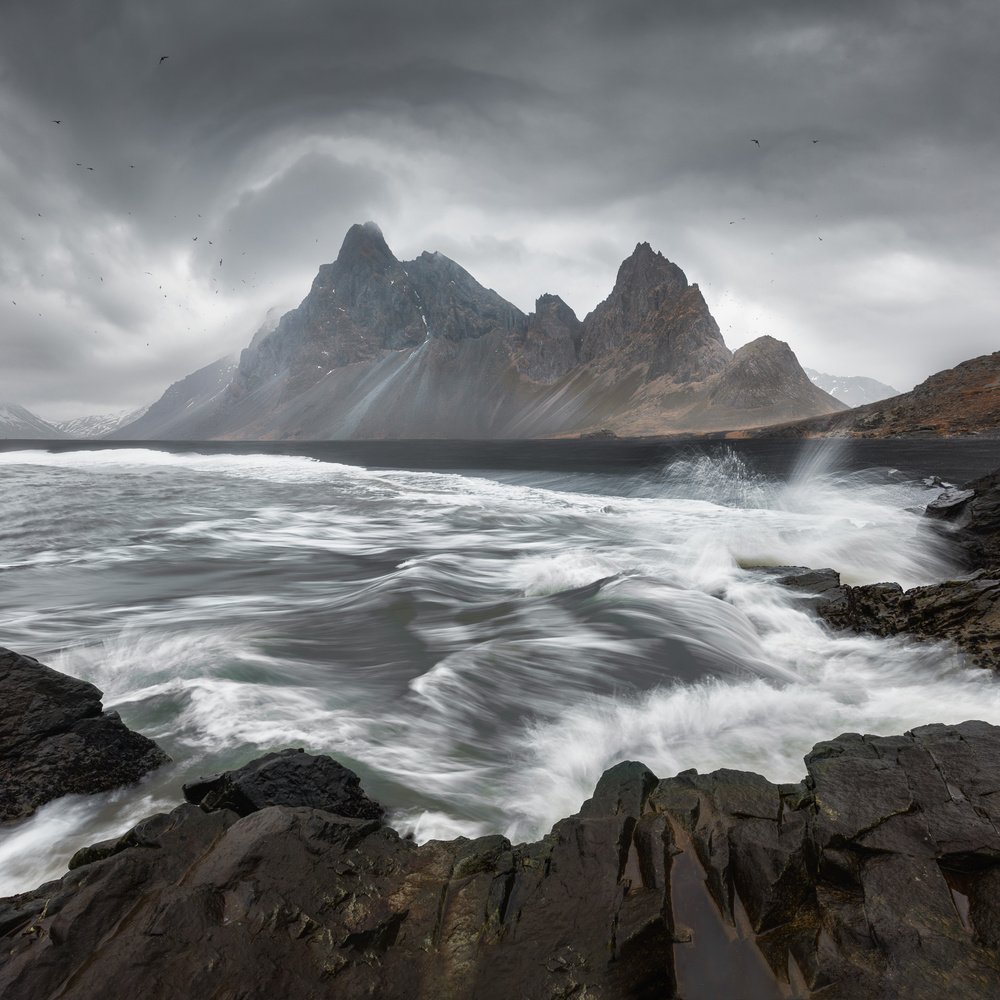 The compositional rules for seascapes are the same as with all other kinds of image-making. A strong focal point, leading lines and visual flow, depth, balance, clean edges, etc. are all tools you can use to create a great photo. If you are in doubt about composition, check out this article. 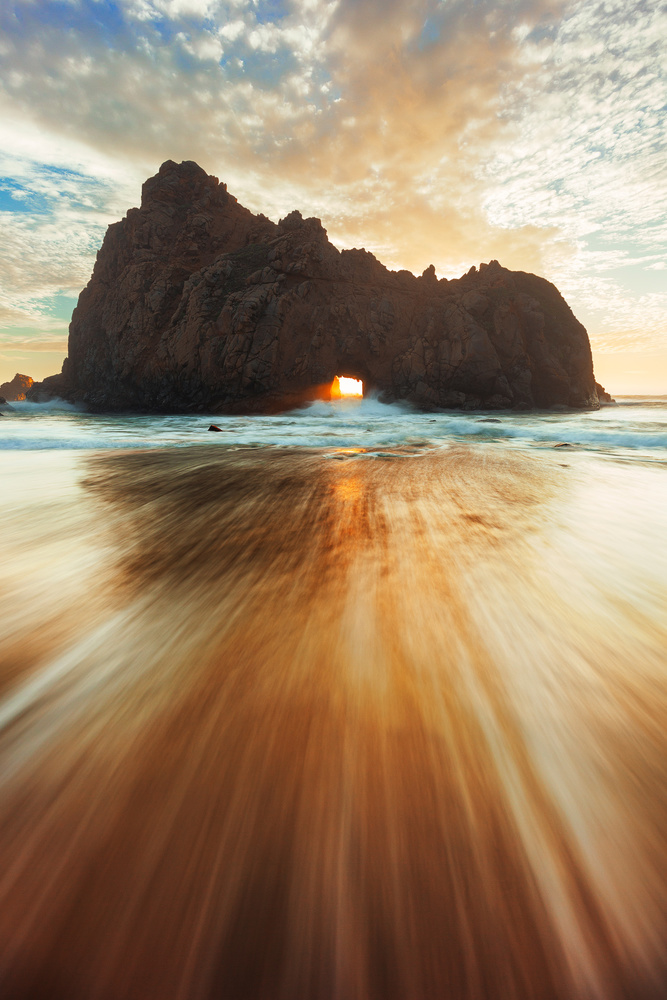 In the video above, you can see how I work with seascapes at one of my favorite photography locations in Iceland.

Thank you very much, Ciaran! :)

I agree with your photographic approach to seascape. It´s more dangerous then it could appear but if you follow some rules you will be safe.
This video is more about being in a playground then in real life. How on earth a location can be so beautiful and have so much potential? You nail it with this great video, Mads!

Thank you very much and yes! It's a playground :)

Nice video. Have you travelled more east. There are dozen of amazing seascape/mountains location in the east fjords. The first only 4 km from Eystrahorn.

I have driven that part on several occasions, but haven't explored it as much as it deserves :(

Just be in touch next time you'll be here. Can give you coffee and maybe share with you few remote locations few people have been to. :) I live in Djupivogur, 50 km east to Eystrahorn.. :)

Fantastic I sure will! I've been to Djupivogur at Framtid three times on my tours. Cute little hotel and a client favourite.