How Kodak Spoiled Christmas for Thousands of Photographers

Those growing up in the States during the 70s and 80s will no doubt remember adverts for Kodak’s various products, especially around Christmas. One year in particular proved disastrous for Kodak, and Azriel Knight and his magnificent beard take us back in time to explain how it happened.

Forty years ago, photography was something that was often reserved for special occasions. Film took a few days if not weeks to get developed, and instant cameras might have been quick, but their performance was quite limited.

Kodak was keen to capitalize on the emergence of new technology, but not long after selling customers a load of cameras, it ran into a serious problem. On this occasion, it wasn’t a reluctance to embrace digital that cost it millions of dollars, but something completely different, culminating in a legal injunction following a five-year legal battle.

As Knight observes, Kodak was promising memories that would last forever, selling this idea through technology that quickly became obsolete. Do you have fond memories of instant cameras and disc film? Do any of these adverts trigger flashbacks to the 70s and 80s? Do you have any old Kodak cameras sitting on a shelf somewhere? Be sure to share in the comments below.

I made it to 2:07 before I had to reach for the sick bucket. Sorry.

I knew when I saw that mustache I should have stopped watching.

I was working on a small camera store when Kodak introduced their instant photo system. I thought their film looked better than Polaroid's SX70. I also remember the chaos the day they were forced out of the instant business.

Yep, these ads are nauseating.

Having grown up in a Kodak family. My dad worked at product development. The instant film camera was only a quarter of the technology driven by instant film. Medical and copy products division and upcoming digital were decimated. Ultrasounds and x-rays were using the film to eliminate labs at med facilities. The disk camera and advantix was digitally coded to put the film into instant film printers. Photo copy machines were able to print photos also to reprint up to 11x17. Huge hit. We had a camera that was the size of a walkman that had a disk film plate in a soap box cover that had a mini cassette tape to hold the dos data of the image. Then project the image on to apiece of instant film on a table top unit. Kodak was such a dynamic company. The lastest great book about Kodak is Images from the Black by Micheal Clayton on Amazon. It's a mistake to poo poo a sentinel company as we are doing to our nation today.

I have my first camera (Kodak Instamatic) and I still have my Kodak Disc camera. Neither one of which I can use.

Around 1979, I bought my wife a Kodak instant camera. All was good and she was happy. Right up until Kodak lost their lawsuit and we couldn't buy film.

In the mid 1980s, our daughter bought a Kodak disk. I borrowed it for a family gathering at our parents home. A few weeks later we gathered again at my parents and just so happened to compare photos. My older brother was showing his 35mm photos. That was the end of my using toy cameras.

Later I stopped by a pawn shop and bought an old range finder 35mm. I knew nothing about cameras other than you pushed the button. So I bought some self help books. Then I bought more books. My sister gave me a Miranda SLR with a 50mm and an off brand 135 with a 2X converter. After that and a few more books, I got a Canon AE-1. Then an F-1.

The Kodak Disk camera was what got me interested in photography as an art instead of just a recording.

I started shooting photos when I was about 11 or 12, and I ran through some of those formats mentioned in the video. I didn't really care what I used as long as I could afford it. Sometimes the images came out great and other times they sucked really bad, but I was at least learning how to get the best out of what I had. It made me appreciate 35mm that much more when I finally had the income to afford the switch.

I still wish Polaroid hadn't won the patent issue. It was the spreading of chemicals via pinch rollers that got them. The film and chemistry was completely different than Polaroid's otherwise. And the prints have held up MUCH better than my Polaroids. How's this one for an instant print that 40 years old! (Yes--I worked in the 'camera department' at a department store when I was in high school....something else that is gone...) 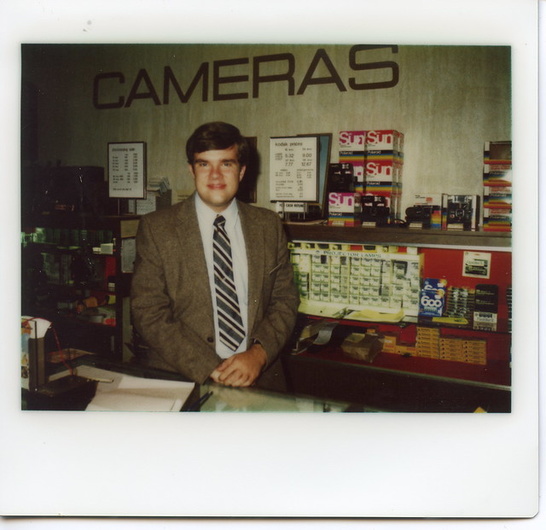