According to Nikon Rumors, D600 owners might have an opportunity to seek compensation for their defective Nikon D600 camera. The law firm Lieff Cabraser Heimann & Bernstein is currently seeking plaintiffs in the case that will be filed in the US. We showed you a time-lapse test for dust and oil accumulation on the D600 (seen here) way back when, and it became apparent that the oil and dust issue was pretty extreme, showing up after only 500 actuations.

Though some report that the problem dwindles off after 1,500 shutters, it was still a big deal. As a long time Nikon shooter, I've been disappointed with how Nikon has handled the dust and oil issue of the D600 (as well as the overheating issue of the SB900 before that). Nikon Rumors speculates that it's not very likely that this suit will ever make it to court because Nikon has begun replacing some defective D600s with the newer D610 on a case-by-case basis. At the very least though, this should be a wake-up call for Nikon and their customer service reps. 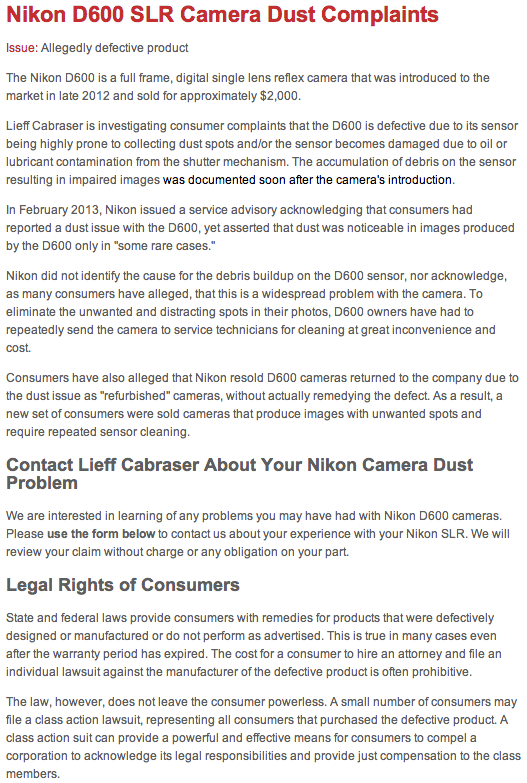 What do you think of the D600 debacle? Have the oil and dust issues been as bad as reported in forums all over the internet?  Let us know below.

I just got mine back from Nikon. I asked for an upgrade to the D610 which they said they could not do. I hope it works out this time. I am in the midst of possibly being sued for ruining a wedding due to the oil spots on the photos.

Photoshop is your friend. Also, there is a process in the D600 body itself which many people aren't aware of. You can take a reference image of the spots by shooting a blank surface, and the D600 will modify luminosity data to neutralize the spots from the reference file! In as much as I would imagine this feature may be available in various Nikon (and perhaps other manufacturer) bodies, it seems almost clairvoyant on the firmware designers to include it on the D600. It's unclear to me if you can also perform the process within ViewNX, which would make life easier in the process.

to get sued would have to mean there is a lot of spots that are highly visible... I wondered exactly how bad an image would be so I googled some images. It's scary... big spots clearly visible on small thumbnails, so I'd hate to think what it would be like at full res. If it's anything like the samples, that's a lot of cleanup work and something that I wouldn't want to do. But if it keeps the wolves at bay.....

This is hardly believable.

I bought mine summer 2013 and It had the biggest dust issues. no oil issues. I cleaned it. now its gone. But is sucked big-time to photoshop every single image I took. There are still very few dust issues, but its microscopic and only noticeable when shooting against a white background that isn't blown out, and amplified. I didn't know I could upgrade!

I am the (not so) proud owner of a Nikon D7000. As my photography has progressed I have started investing in faster glass. First a 35mm 1.8, then 70-200, then 85mm 1.8. At first I didnt realized that my camera had massive back focusing issues. f3.5-5.6 dont tend to show that your camera is back focusing. It has taken me a long time to realize that my focus problems are severe. All my lenses i listed above are set at -20 AF Fine Tune and that has helped them nail focus. I use "nail" cautiously.

The D7000 is a great camera for its price range. But it is very discomforting to know that my main tool for my photography is faulty and unreliable for taking the images that I need it to take. Why does my camera body have 1 year warranty when my lens has a 5 year warranty? Like I said, it has taken time for my photography to progress into smaller and smaller depths of field. And it has taken time to realize that it is not my lenses that suck, its my body.

On a side note, I purchased the GoPro Hero 3 Black edition only to find out that it has an absolutely horrible white balance problem. The images are awful. What does GoPro decided to do? Release the GoPro Hero 3 + just a few months later. Same camera, same everything, they just fixed the stuff that they shouldnt have released with the Hero 3. Nick Bowman even said this on his 60 Minutes interview.

Have you done firmware updates on the D7000? They may correct the issue. Also, as a curiosity, have you tried a "D" series lens on the body like a 35mm f2 to see if you have the same problems? I'm on a hunch that a lot of these issues have to do lens/body communication errors. A "D" series lens is entirely controlled by the body. I shoot with a few screw-driven lenses on my D600 and they focus fine, but I've seen back-focus on my D5100 with it's kit lenses.

Same here, I have 2 d7000`s and both have the same back focus issues with all my lenses except the D series ones.

Yeah, this is where Sigma was brilliant is designing the control interface to modify the lens directly. This is especially important in light of Nikon's recent firmware updates which seem to try to sabotage third-party products. Whether that was intentional or not is nor clear, but Sigma was right on top of it.

Is your camera "unreliable" or does it suffer from back-focus ?
Back-focus can easily be remedied by sending the camera to a Nikon repair center. It's just a simple misalignment of some mechanical parts.
"Unreliable" on the contrary means that your camera works flawless most of the time but eventually fails in some areas for no apparent reason.
With regard to the warranty : A DSLR is comprised of many delicate mechanical parts that over the course of time wear out and fail. This pertains lenses to a lesser degree.
You should be much more infuriated about TVs and their measly 1 year warranted despite featuring no mechanical parts at all. That is a really gross rip-off.

No Problems here with my D600. But i think i have a pretty late version.