Review: Fotodiox's LED is a Modular Monobloc-Style Video Light Worth Having

LED has come a long way in the last three years. It was not too long ago that serious photographers and videographers were having a hard time with the idea of LED. They tended to be under powered and cast unattractive shadows. But there was potential, and that potential is beginning to blossom. Fotodiox’s LED100WA monobloc-style heads are one such shining example of how far LED has come and what can be done with it.

The LED100WA comes balanced one of two ways: daylight 5600 and tungsten 3200. I tested the LED100WA-56, the daylight balanced version, and used it for both photo and video extensively to see how it handled. Despite some flaws stemming from its size and weight, the LED100WA is a solid light that excels in studio situations.

One of the more desirable features of this light is the Bowens speed ring mount that it accepts. I like how simple it is to mount a soft box on this guy, as without one the light can be particularly harsh. I used a 36x36 inch box on this for portraits and found the light to be perfect, but in some situations I would have liked it to be just a bit more powerful. After putting a diffusor in front of the light, it can be just a little underpowered. I think if I outfitted a studio with these, I would look to use between two and three on set, with one hard light as a kick. Fotodiox rates the light to offer proper exposure at f/5.6 at ten feet when shooting at 1/20 of a second. Most of the time, I placed the light under five feet from the subjects to have a bit more flexibility.

If this was your only light in a dark room, it’s not bad. However, if you want to mix with sunlight, know that it generally can’t compete like you might be used to out of studio strobes or powerful speed lights.

The light comes with a rather large reflector and diffusion sock, which can be pretty useful if you don’t have any soft boxes with Bowens speed rings. It’s not perfectly diffused, but it is more than manageable. If you plan to get a few of these lights, the reflector would be excellent for that kick I was mentioning earlier.

I’m a bit torn when it comes to the build quality. On one hand, I really appreciate how solid it is. The whole body is encased in a thick, matte black aluminum shell which makes me feel pretty safe moving it around. On the other hand, I absolutely hate moving this light around because it is so darn heavy. All that metal plus the LED lamp and cooling units inside the body of the head make for a decidedly heavy object. Add to that the bulky ballast that you have to bring with you in order to operate the light and the light stand you need to mount it on, and you will not be too excited to go on location with this light. The whole package weighs about ten pounds, and it’s awkward weight as well due to the multiple pieces and cables, so I recommend a rolling bag if you plan to try and take it anywhere. 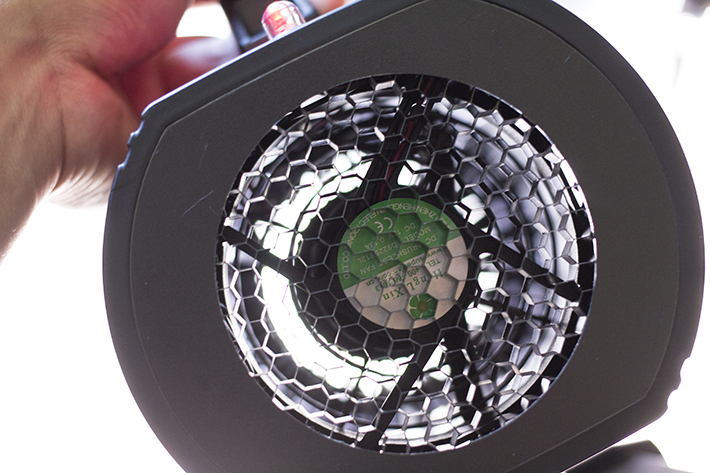 You might be wondering why the head is so large, when LED panels from brands like LitePanels seem to be so compact. I’m not sure what the tech involved with the power of the LEDs on Fotodiox’s head are, but I do know they took no chances with keeping the unit cool. Looking down the inside of the head shows that it is made up of about 3/4 cooling fans. The fans are extremely quiet, and since I use lavaliere microphones when shooting video, they are even less of a concern to me. Even if you’re using a shotgun mic, the sound the fans make is so minimal, I am willing to bet that you will never have an issue with the background noise. 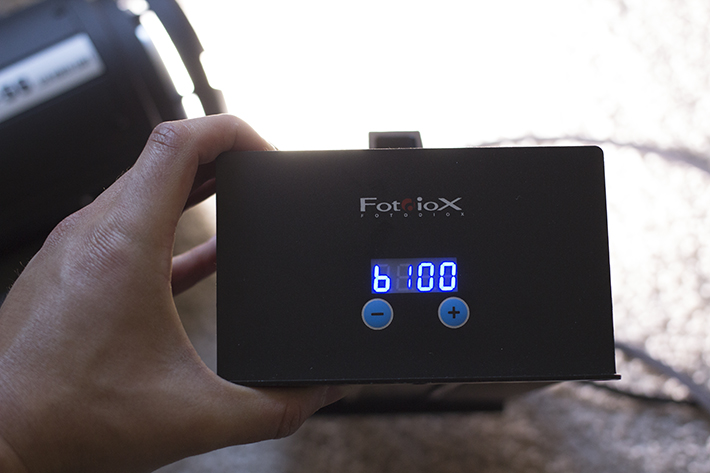 A problem I have with some lower quality lights is that, sometimes, they will flicker as you lower the power level. That flicker might hardly be noticeable to the naked eye, but a video camera shooting 60 frames per second will easily pick it up. Below is a video that shows how the light handled at various power levels.

You can see, there is no flicker. This is great, because if there was, the light would be effectively useless for the main reason anyone would want to buy it: for video production.

That video also shows that the color temperature is markedly consistent. This is another sticking point for many videographers, who don’t want to worry about re-adjusting color temperature during a shoot when lights are dimmed for whatever reason. In addition to seeing the color consistency there, I wanted to also test it on stills. Below are four images taken at full, three quarters, half, and one quarter power. 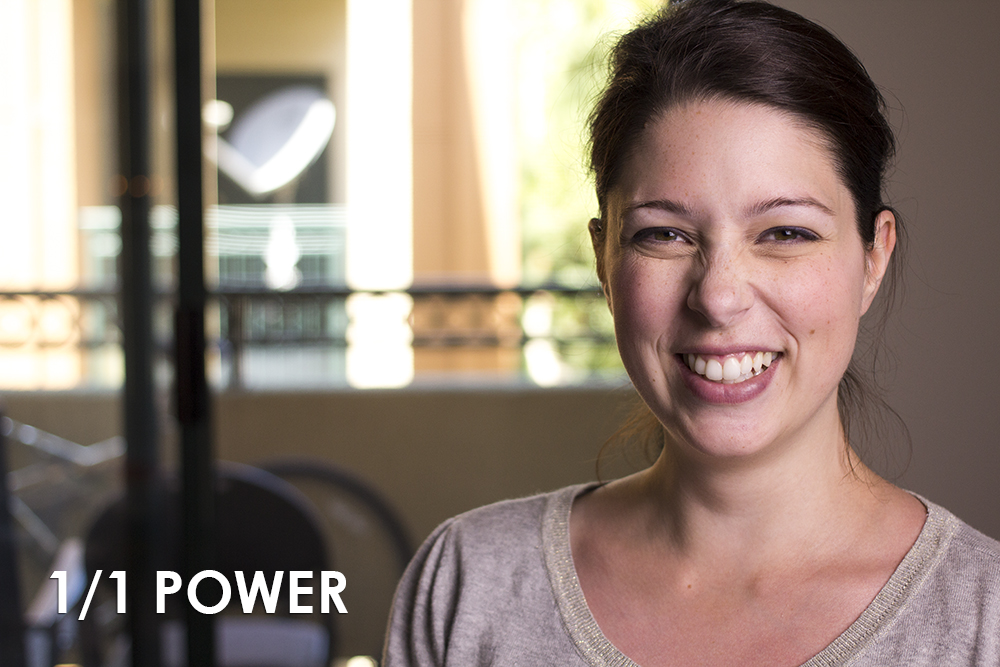 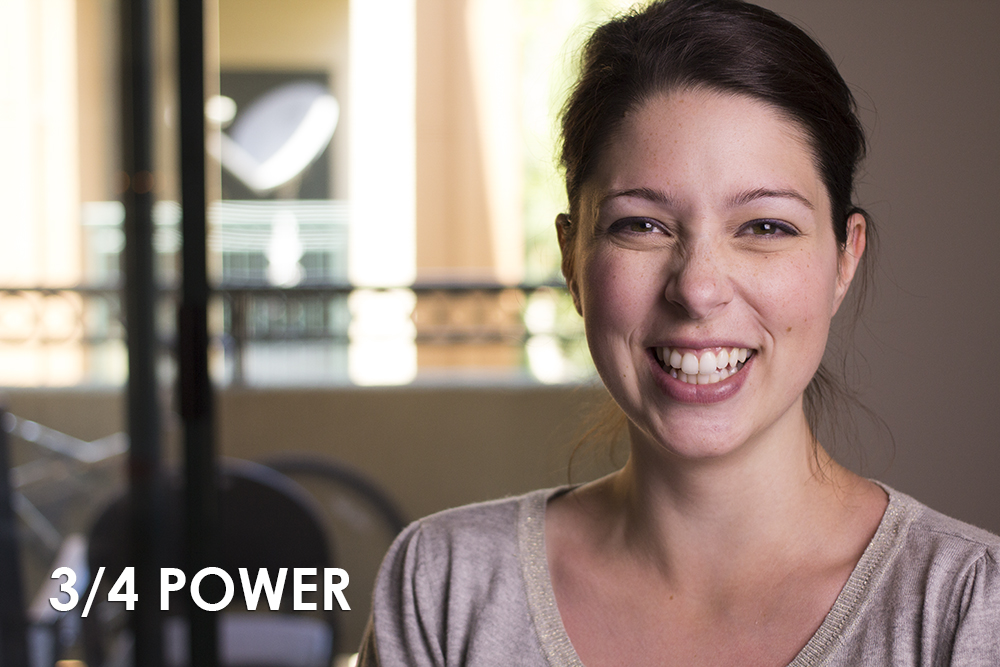 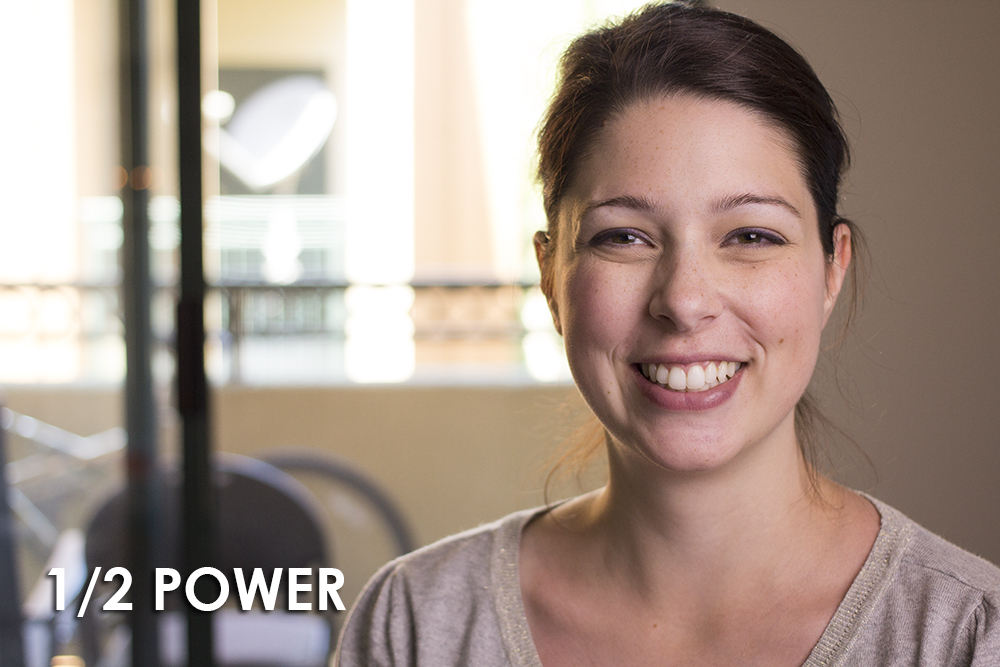 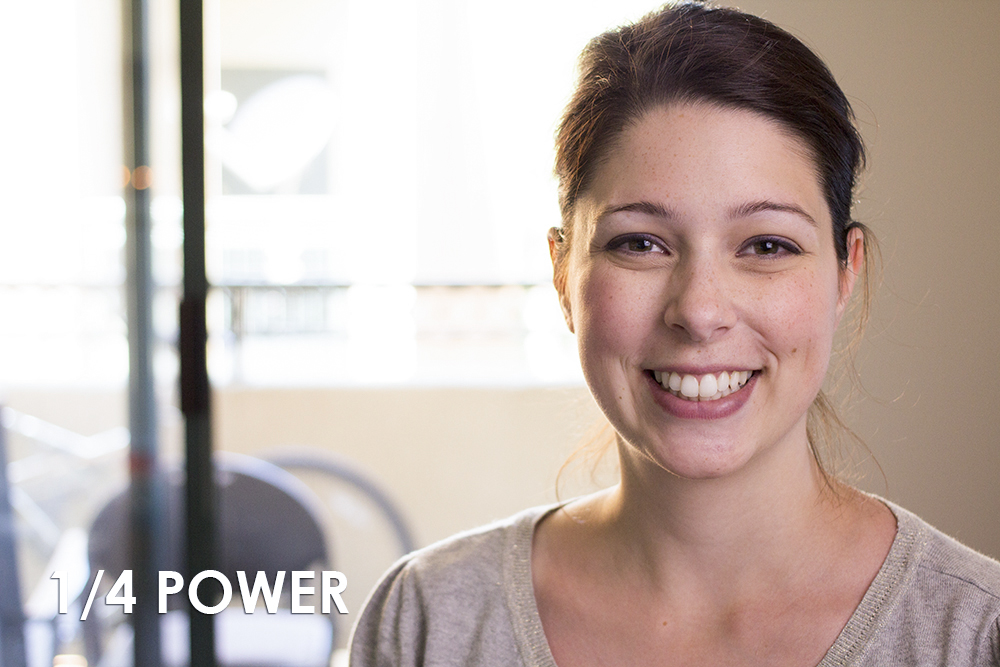 Try not to be distracted by how bright the background becomes as the power drops, as I was forced to meter in order to keep the model exposed. If you look at her complexion, you can see that the color is very consistent at 5600 Kelvin.

The way Fotodiox built the LED makes the most irritating thing about LEDs a non-issue: crazy multiple shadows. The next time you see a LED panel bank, put your left hand out in the cast of the light, palm facing the bulb. Then, bring your right hand up to cast a shadow on your palm. What you will notice is that the farther you move away from the light source, the more shadows appear. One hand appears to cast 100 shadow hands. Those multiple shadows can be really distracting. Fotodiox’s LED100WA series does not have this problem. The light source acts like one giant bulb, which is ideal. 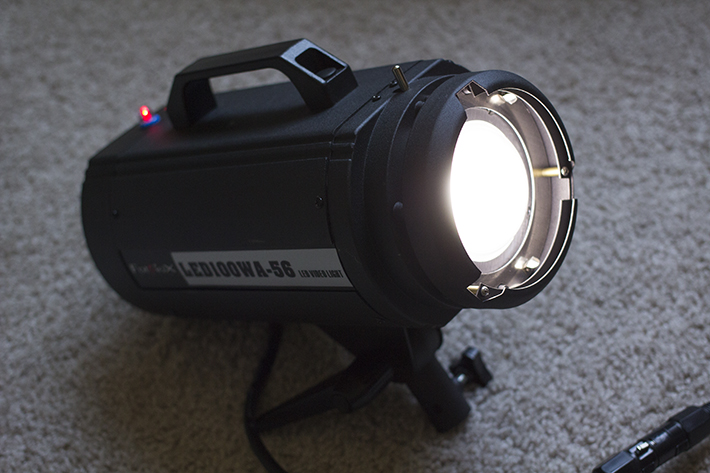 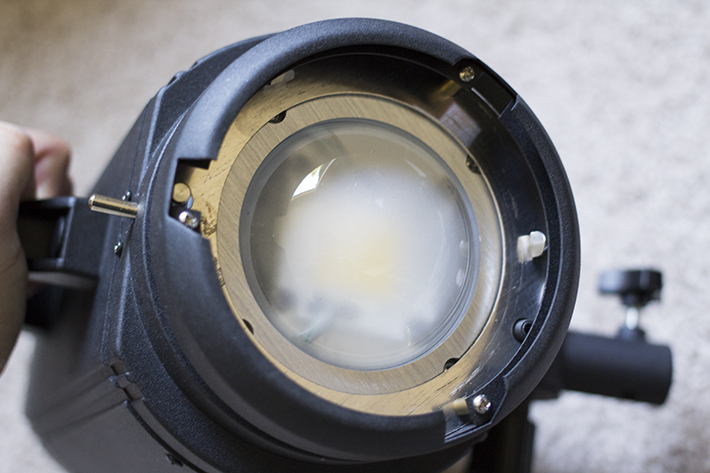 One problem with this light, if you’re a real stickler, is that it does cast a hot spot when shooting with a softbox. There is only one real way a manufacturer can address this, and that involves making the bulb jut forward into the box and cast light in all directions, resulting in clean edge-to-edge light cast. It’s a highly unusual design that only a few manufacturers invest in because, let’s be really honest, the hot spot rarely causes much of an issue. It’s just something to keep in mind.

I think one of the things I like most about this light is the price: $325 is a good price point for what you get. The Bowens mount makes it modular and adaptable, it’s quiet, it’s got decent throw and it’s an affordable way to outfit a small video studio. Plus you can use speed rings, beauty dishes and soft boxes you already own.

Very heavy
Number of cables and cords, in addition to ballast, makes it a pain to move around
Can sometimes feel underpowered

The Fotodiox LED100WA-56 is a great light that shows just how far LED has come in the past few years. It packs a lot of power and with its inclusion of a Bowens speed ring mount, is highly modular and adaptable. Though it’s not something I would say fits a photographer, it is a great video light that I am sure to use often.

The power can be changed from any number between 1 and 100. I just chose quarter differentials for the purposes of the review.

The problem with LED lights isn't just the shadows and the luminence. The problem is that LED color has no defined CRI. It's an up-down graph across the board and is the reason why, unless you have a tight space for filming/shooting, LEDs are generally not considered professional sources.

So all of those multimillion dollar film productions using Litepanels aren't professional shoots?

Aren't monoblocs a strobe thing? Also, wouldn't the addition of a ballast not make this "monobloc"? Just curious...

Correct, it's more of a monobloc style. Best way I could describe it.

Correct. It appears this type of lighting is more of a bank-style system, and would be better off sold as such a system for studios. This way you have one power supply for multiple light sources instead of one for each. I suppose the bigger question is why can't they just integrate the unit into a true monobloc? All of these unit are sold this way, and I can only imagine something there gets REALLY hot.

we reviewed Fiilex LED's a few months ago. Here is our video, if you are interested.

I don't get the hype with the Litepanels. I got to use two (1x1) for a few days, and they are weak as hell. You barely get any light at max setting, especially if you diffuse it.

There is another test about the stuff: http://www.youtube.com/watch?v=t3kT9WXd7co&amp;list=UUytsuSs-VSDZIWCJMQ2WgPw

Thanks for the review! Real world power output specs seem hard to come by when exploring various continuous light options. Any chance you could share the exposure settings (including distance) for your test portraits? I assume you used the 36x36 softbox you mentioned...to help us understand the power output and put your tests in better context, it would be great to know more details about this modifier too. I.e. how much light does it eat? I assume the light mounts facing forward - Is it single or dual baffle (assuming single since you mentioned having a hotspot)? Also, there was obviously a lot of window light coming in - do you recall what the ambient exposure was on your subject's face? Thanks!

Hey Dee,
So I was about three to four feet from the subject, light was five feet away. Single diffused soft box (so about 1/4 stop loss). Window light was from behind, so it wasn't exposing her face much at all. Camera/Lens was f/2.8 1/200 of a second, ISO 400 when the light was at full power.

At full power this thing was great, provided the light was between 5 and 10 feet from the subject.

you can also solder them in parallel if on isn't enough.
As for the colors you can get any lum. from 3k-64k

Do it! I'd like to see it when you're done. Email it to me: jaron[at]fstoppers.com

Sure thing. Ill order the chips when I get a couple of extra bucks

I hope this discussion didn't die yet. I'm interested in getting a LED100WA-56. I also want to get a LED200WA-56 but would like to get more reviews/feedbacks from other owners or testers.

The reviews of this thing on Amazon are terrible. Not sure why, because all the professional reviews I read are good.

A higher CRI would be better. In fact, i would buy two or three 200WAs if they ahd a CRI of 95+. Other manufacturers now have similar LED lights with 95+ CRIs. However, those also cost a lot more than this one. E.g. the Fiilex Q500 costs $2500... Westcott also has the SkyLux for $1000. A little too expensive.

Nice review!
Here is a review of the 200 watt version. Jinbei ef 200
https://www.youtube.com/watch?v=5z7M3gKglFQ