New gear always excites any photographer like a kid gifted with a new toy. More often than not, we always just end up taking random photos of a cup of coffee or even the lens cap on a table to test out the new camera. So, I challenged a friend to kick it up a notch when we got to unbox the new Sony A7R IV.
Coming to you from wedding and portrait photographer Jiggie Alejandrino, here's a video that revolves around testing the new camera right out of the box and producing stunning environmental portraits in low-light conditions.

The shoot was done at a park in between a hotel and a mall, and though it had quite a good number of interesting layouts off the bat, it was interesting to see how the photographer would create simple yet dramatic lighting with speedlights while also making sure that they blended right into the ambient lighting. While giving out quite a good deal of simple lighting techniques, he also tests out how the camera performed focusing on a moving subject while shooting her in low light.

So much has already been said about the Sony a7R IV even before it hit the market. The sensor alone has wowed many even before they saw any full-size sample photos. Opinions have been thrown around and expectations have been set for this camera, but really, the only credible way to judge one is by seeing how it performs in situations that it was made for.

The model starts at 4:15, but really there's nothing to see here unless you have insomnia.

I knew that a Sony post would be coming soon as the Blackmagic pocket cinema camera 6k was down right ignored. We get it, you guys like Sony and iphones. 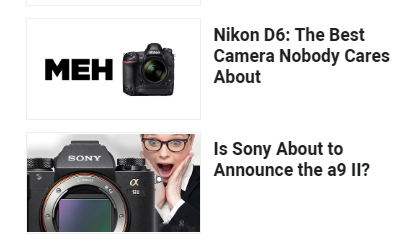 I wouldn’t believe Lee Morris if he told me rain was wet...

Misleading title. "Low-Light Environmental Portraits"? Dude, you shot it with strobe light. How much did you get paid for this Sony commercial?