Photojournalist Candace Feit spent a year documenting the lives of Kothi people in southern India. “Kothi” loosely describes people who deviate from heterosexual norms, blurring the lines of gender and sexuality. Feit says her project examines the Kothi community’s ability to “manifest various gender roles with dignity” in the face of persecution.

In a statement about the project, Feit says:

For the past year I have been documenting the lives of a community of people who call themselves “Kothi” in the southern Indian state of Tamil Nadu. The term Kothi is used to describe a wide swath of behaviours that are seen to deviate from the heterosexual norm, including married fathers who have male lovers, people born male who wear female dress and male-born people who wear traditional women’s clothing only during religious festivals or celebrations. Some are quietly battling with their families about the expectation that they will soon marry and have children, while others are completely estranged from their families as a result of their gender identity expression. They all take what they describe as the female role in sex and give one another female names, by which they address one another.

In the places where they gather together - in their temples during religious celebrations, or in certain Kothi’s homes - they create their own spaces to express their gender and sexuality. They do this through the theatre of religious festivals and the assuming of traditional gender roles. For example by gathering together to do what they call “women’s work:” chopping down wood and preparing and serving food together and practicing traditional Indian dance. This juxtaposition between reality and make-believe creates space for them to be the women they feel themselves to be.

Yet even as traditional culture allows small spaces for Kothis, they are inevitably forced to be outsiders – something that the debate over [a 2013] ruling recriminalizing homosexual sex brings into sharp focus.

By documenting the lives of these Kothis, I seek to illuminate how they are able to skirt the line between modernism and mysticism in order to carve out a place to express what they feel is their true gender identity.

This work shows how they manifest various gender roles with dignity, even as many face family and social pressure to marry and have children, are threatened with violence or are ostracized from their communities. 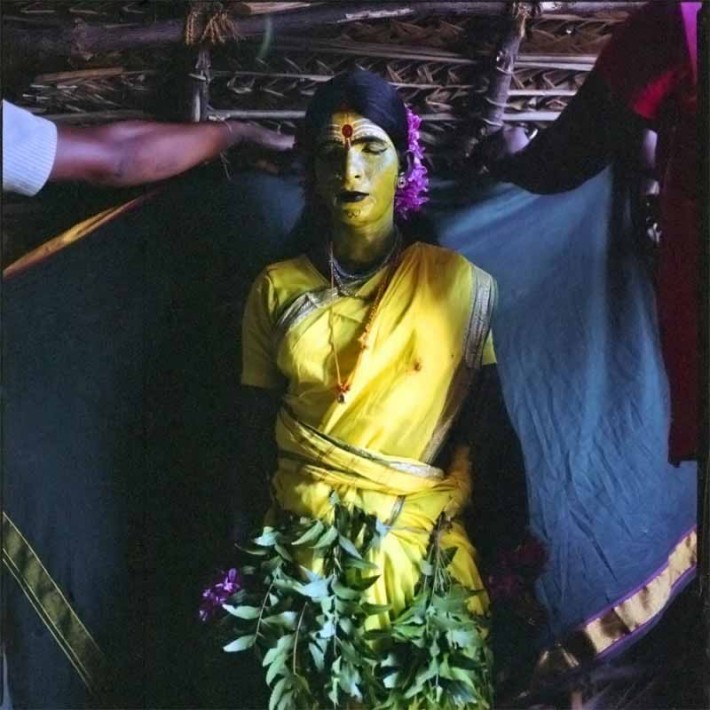 "Men in the village of Devenapattinam dressed as Gods during the Mayanakollai festival."

Prior to this project, Feit lived in India for three years working on projects around Pondicherry (an area very close to Cuddalore). She began the project after “a South African writer friend saw [my] previous work and really liked it. He was in the process of writing a book about sexuality in the developing world and was going to do some work around India for his book. He invited me to join him for the Mayanakollai festival, which was the first time I met any of the people who I’ve been photographing for the project.” Feit says that, at first, she was unsure about documenting the Kothi community; “3rd gender people in India have been photographed extensively-as have many religious festivals. But because I happen to know well and love that part of India, I decided to go.” 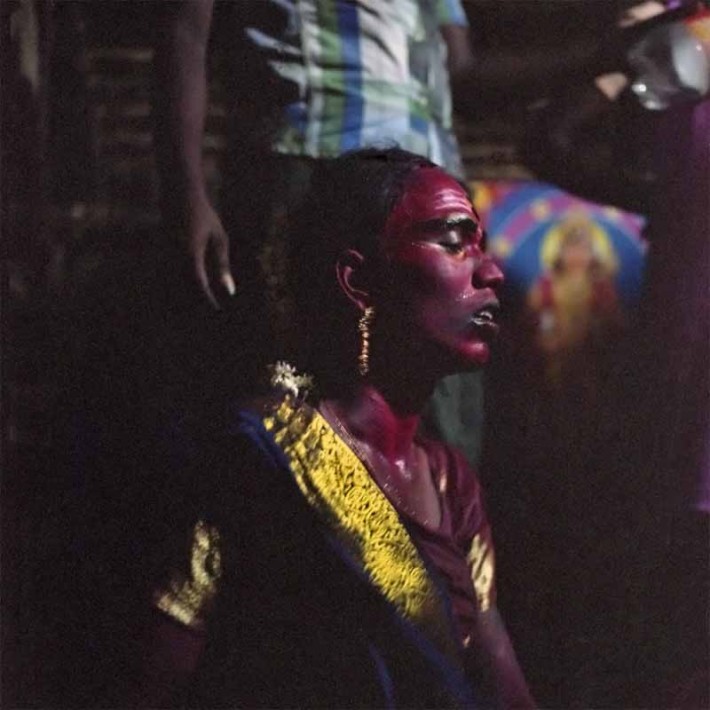 "Dinisha, exhausted, after playing Goddess Kali in the Mayanakollai festival."

The Kothi community that Feit photographed consisted entirely of people who are born male. Feit says, “There are, of course, communities of female born trans people, but unfortunately I do not know any of these communities in India.” She found an interesting contrast between the fact that religious festivals allow the blurring of gender lines, but mainstream Indian society shuns this “blurring” on a day-to-day basis: “A fascinating thing to me became the way in which many of these people were able to express their gender identity in the confines of religion and religious festivals, whereas they were unable to do so in the course of their daily lives.” 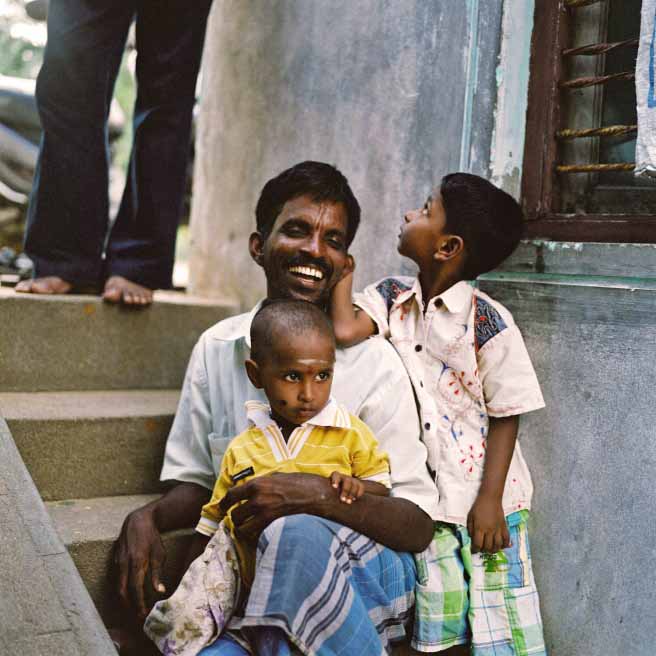 "Jagada Guru, whose Kothi name is Arundhati, sits with his two children while visiting Sivagami’s house and temple." 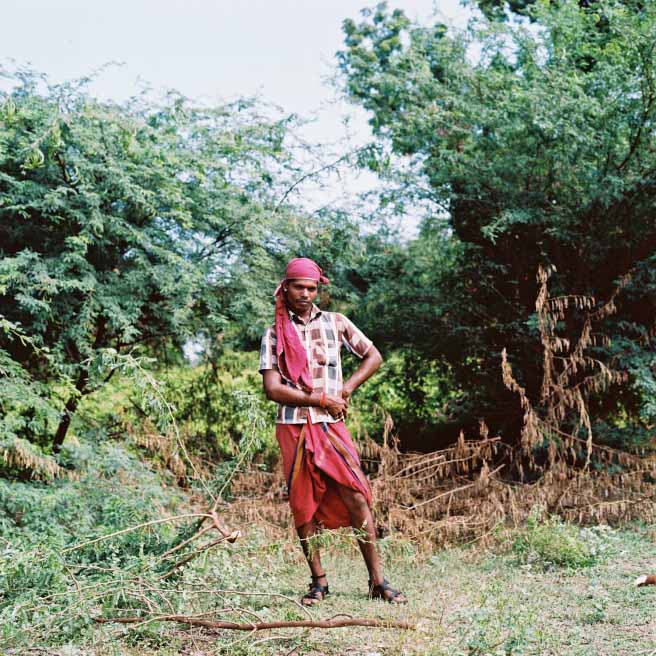 "Chitra, a kothi priest from outside of Cuddalore, poses for a portrait while cutting down wood used for cooking. Many kothis choose to do this kind of work – which is traditionally done by women – as another way to express their female identity."

Feit says that the members of this particular community vary from “completely ‘out’ and living as a woman or a 3rd gendered person (someone like Sheethal), to someone like Lakshaya whose mother and brother know she is ‘Kothi’ but who accept it to a large degree, to other members of the community who are not ‘out’ at all-who live as heterosexual men, who are married with children and who still self-identify as ‘Kothi’, and who have male lovers.” 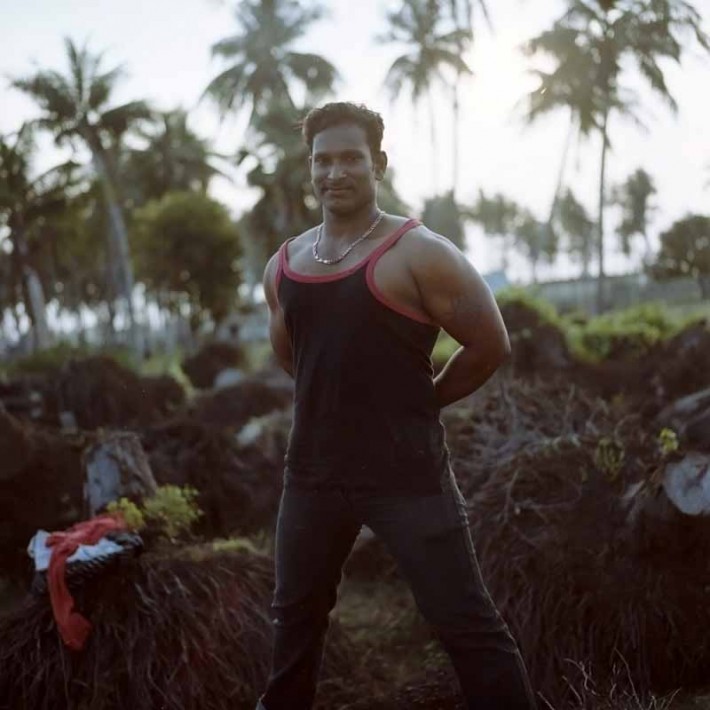 "Raja, a body builder who also dresses as a woman to perform classical Indian dance and who has kothi sexual partners, poses for a portrait in Devenapattinam, March 2013."

Discussing her process, Feit says she shot the entire “Kothis in Cuddalore” series with a Hasselblad on 120mm film. She states that for her recent work, involving a deeper narrative, she chooses to use 120mm film because it changes her approach to her subjects. “I try to bring a meditative, intimate and quiet quality to my images, despite many times being a foreigner with a giant camera. That takes time…and for the most part it means that while my presence in the environment is rarely overlooked, I am able to have more of a give-and-take with the people I’m photographing.”

“I do think that many subjects feel a bit differently when being photographed in film. I think one of the main reasons being that-at least for me-there tends to be a much deeper connection between myself and my subject… It’s hard to hide a Hasselblad and it takes more time to focus, is louder and I can only make one frame every dozen seconds or so-instead of a dozen frames a second. So there tends to be much more of an exchange between us and I hope that comes through in the images.”

Feit notes that she also uses her iPhone as a kind of “digital sketchbook”, which also allows her to show people photographs right away.

While Feit admits that shooting with film means she cannot see her work until much later, she says “it feels more liberating than anxious to be able to really take a break in the evening-instead of spending each night editing images. It also means I don’t spend the time that I’m with people making pictures, scrolling through my camera. Which means I hopefully am better able to concentrate on what I’m doing at that moment.” Instead of editing, like she would with a digital project, Feit says she likes to mentally go over the images she shoots each day, to “think back to the day and the moments I hope to have captured…” 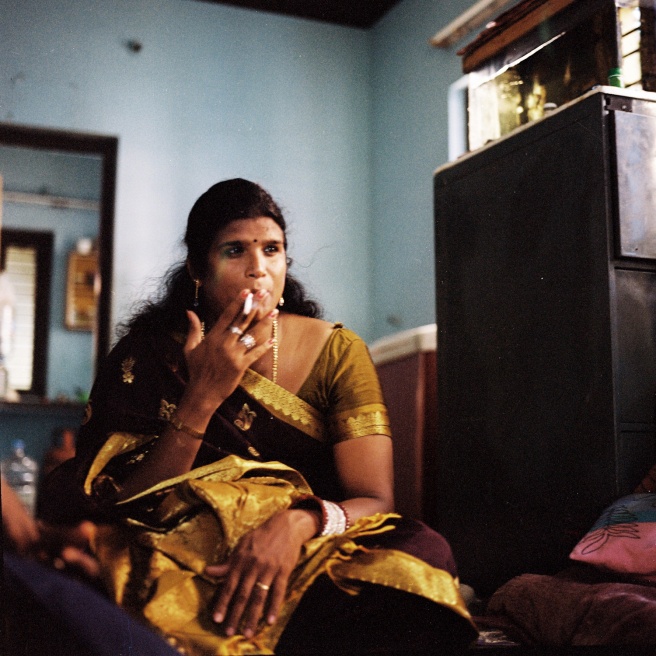 "Sheethal smokes a cigarette in her apartment in Pondicherry. Sheethal acts as a guru to many of the younger kothis in this community who refer to her as their mother and she to them as her daughters." In the following photographs, Feit documents Sheethal's "first birthday"; a celebration of the first anniversary of her gender-reassignment surgery.

After the completion of Feit’s project, a landmark court ruling in India recognized the existence of a third gender under Indian law. Traditionally facing being ostracized or abused, India’s transgender or third-gender community will not only be legally recognized under this decision, but will be included in “quotas for jobs and education…bringing [its members] in line with the benefits already afforded other minority groups and lower castes”, according to an article published on NPR. While this decision will not immediately rid Indian society of the dangers and persecution faced by India’s transgender community, it marks long-awaited progress for some 2 to 3 million Indian citizens who identify outside of traditional gender labels. Paving the way for greater representation in government, this new ruling has enabled India’s first openly transgender candidate, Bharathi Kannamma, to run for a seat in parliament.

Candace Feit is a Johannesburg, South Africa-based photojournalist. Her work has appeared in such publications as The New York Times, The Globe and Mail, The Los Angeles Times, The Chicago Tribune, National Geographic Magazine, U.S. News and World Report, and Time Magazine. You can see more of Feit’s work on her website.

Note: pronouns and names used in captions are those requested by the subjects.

What? Are you telling me these were actually shot on color film and she didn't use a DSLR with VSCO filters? You can do that? *head explodes*

But in all seriousness, really interesting stuff. I knew that in some places there is...I believe a....third gender and those people are considered to be blessed by the culture's deities (and yes, I know that trans people are not really some sort of "other" gender unless they state they are). I can't remember where it is though...

I did not know anything about the Indian trans and gender nonconformist community until now, so thanks for publishing this article. :)

"While Feit admits that shooting with film means she cannot see her work until much later..."

Shoot long enough with film and you'll see your picture before you fire the frame.