A mobile app developer may just have made a costly mistake. After using a photo of Kim Kardashian to promote their “selfie beauty” app without her permission, the reality star is seeking more than $10 million in damages in what her legal team say is “a calculated, unlawful scheme to usurp, use, and exploit [her] image, celebrity, and universal recognition in a world-wide marketing campaign.”

Kardashian’s lawyers say that in using her image, the developers behind iHandy have “reap[ed] millions of dollars’ worth of advertising and promotional services from [her], all without paying for it.”

As per the filing, which is 14 pages long, the company is alleged to have begun using her image back in September of this year to promote its “Sweet Cam” app. What’s likely to have irritated Kardashian even further is that the photo in question was one she originally posted to her Instagram account in order to promote her KKW Beauty cosmetics line.

She and her team claim iHandy directly benefited from the “sufficient notoriety, recognition, reputation, and influence” her name and image holds, mentioning how she would normally be “highly paid” for any such endorsement. They draw particular attention to how she is selective of what she commits to, so as to protect the brand she has carefully built up.

[Kardashian] does not use, like, nor endorse [the app] and did not authorize or agree to license use of [her] name, photograph, image or persona, in whole or in part, to any of the defendants to advertise or promote [their] products or services.

She believes the damages owed to be in excess of $10,000,000. It’s also not the only ongoing legal battle she currently faces. Last year, she filed a suit against British fashion brand Missguided, stating trademark infringement for the company using her names and images to promote “copycat garments.” In that particular case, she won $2,700,000, plus her attorney fees, after a judge ruled in her favor.

Posted In:
Legal
News
via:
The Fashion Law
18 Comments

I find it ironic that a celebrity sues for such a high amount and then disregard a photographers Intellectual Property by using their images without authorization.

I suppose it is unfortunately about who can afford the better lawyer ∕ team of lawyers?

but in this case, she is the photographer

I don't keep up with the Kardashian drama, has she been caught using photographer's images without permission, or are you stating this as just a general statement not directly related to her?

I was coming here to say the same thing.

How stupid can that app developer be? There's so many hungry wannabe influencers out there and they chose a high profile celebrity. And, all for this photo: 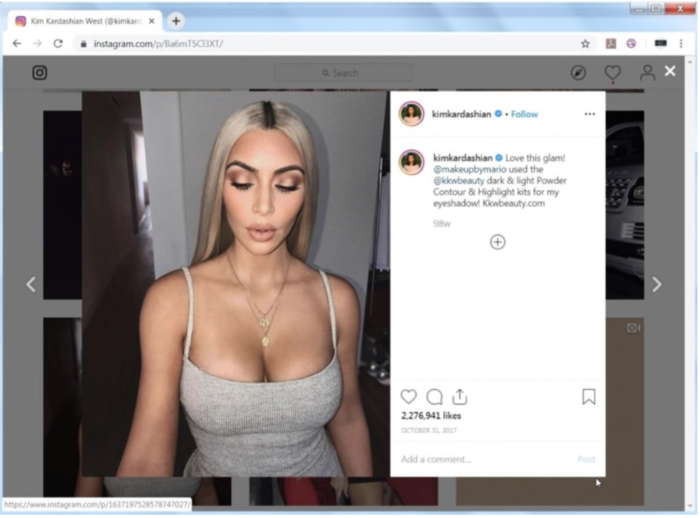 It's kind of like an own goal in soccer. Should have been avoided.

There are teenagers in Europe like Greta Thunberg that sails across the ocean to come to UN and talk about Environment and there is US teenagers worrying about who gets married on a boat to some D bag on a TV show ... I think Kardashians are part of the problem.

They are a problem, but it’s not limited to “US teenagers” wants.

Did that image come with or without her clothes on

It's part of the system - and the system says she has to protect her rights. And when she does wrongs - we have to protect our rights and attack. Of course it's ironic that she abuses other ones property - and the one who's getting sued could try that for defense - but it won't probably help.
Aren't there any pro-organizations that assist us photographers in attacking that kind of abuse?
The main part of this drama is, that bad photographers (as Kim) seem to have more right than the pro's. Just due to the fact that the one with the large piles of money can afford better and more juridical assistance.
Not to mension that they know Potus... (one other reason for us europeans not to like the Kardashians of course).