You may or may not know that I occasionally write satirical articles for Fstoppers. This is not one of those articles. An Internet "entrepreneur" was sued for using a copyrighted image, and he now claims the photographer who sued him was "malicious" for doing so.

While there's some nuance to copyright law, the basic idea that you can't just take an image you found on Google and use it for commercial purposes is generally pretty well understood, especially by those who work on the Internet. Nonetheless, Internet Entrepreneur Dan Dasilva did just that, using images he lifted from a Google image search in his Shopify store, and was subsequently sued, settling for $27,000 plus about $10,000 in legal fees. Open and shut enough of a case, right? Not so for Dasilva, who then took to his YouTube channel, making a video in which he acknowledges that he should have known better, but still calls the photographer "malicious" for daring to protect their copyright and vaguely implies that his followers should track down the person in the hopes it will ruin their reputation. He then goes on to make an entirely irrelevant comparison by examining transformative artistic work, which of course has nothing to do with simply lifting an image from Google and using it in a commercial context. Dasilva even says he still does this in the above video, despite having just been sued for that practice.

Of course, while someone who runs an Internet store should definitely know better, it's not the ignorance that's the most infuriating so much as the arrogance and entitlement coupled with the disrespect for an image creator's property. It's unfortunately not the first time I've seen this attitude, and while I can't attribute it to any particularly obvious single source, it is an unfortunate part of our culture. Let's hope that the perception of creators being malicious is transformed into respect for the hard work they put in.

By sharing this video, you're doing nothing but giving him more clicks and more money.

But also adding support for the photographer under attack. Otherwise this guy is free to spout his nonsense to the world unchecked.

Agree, a video on the photographer side would have been more appropriate.

agree with Chris, I would not post the link to his video. I played the start of it but the guy is so full of himself, just a waste of time. Don't promote him by linking to his garbage, especially his video traffic is probably where he makes his money in the first place.

He makes his money "teaching" people e-commerce. I'm pretty sure this video isn't even monetized.

There are 5 ads that play throughout the video. I'm no expert, but I'm pretty sure it's monetized.

Weird. I tried it about 10 times just to be sure and never saw an ad. Even so, I think the amount he would get from even 10,000 views from Fstoppers readers would be a pittance in comparison to making the world aware of this sort of attitude.

Try without Add Block Plus.. Or in a different browser.. I just checked on Safari and it had 5 adds throughout the video!

I'm on chrome and never use an ad-blocker (YouTube creators deserve our money) ... don;t remember seeing an ad. :/

It was just my experience.. 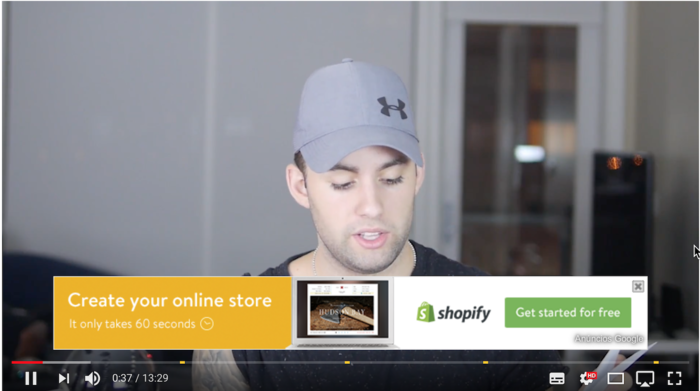 If enough people view it he could be sued again by the photographer for defamation. The more people that see it the more it could hurt him. Photographer could claim damages to his business.

I didn't watch the video but the Fstopper's article reports that he encourages viewers to track down the photographer and ruin his reputation. That does sound like something litigious. This guy sounds like SUCH A JERK! I hope the photographer sues him again.

I won't tell you who the photographer is so he can;t turn around and sue me but but if you want't to find out it's easy ... it's public record .. wink wink ... nudge nudge.

I hope to go he had a non-disclosure in his settlement so the photographer can sue him again.

YouTube pays $1000 per million views. That's not very much at all and I doubt he's going to make much money from our audience

Sounds to me that he just saved a bunch of people from making the same mistake.

Not really. His video is almost 100% wrong on every count.

He admits that the lawsuit didn't discourages him from taking images from Google searches and he still does it.

He encourages people to instead use Creative commons images and that by doing so they won;t get sued ...
That's a very dangerous attitude because images are stolen and posted at CC-0 or whatever all the time.

He then muddies the waters by introducing flawed examples of personality rights and derivative works ...

Pretty much everything he says is wrong.

Disagree with others. Posting this is exactly what needs to be done.

His attitude/understanding is precisely why we need to crack heads and knuckles. He doesn't get it but is scared enough that he does what we need...warn others that using work without permission or attribution costs more than the benefit.

As we say in the countryside...the juice ain't worth the squeeze.

He probably voted for Trump, too. In this GYBTP world... hey, why not steal our intellectual property, too.

right? I think people can't come up with anything else so they blame it on the president of the U.S.

There are idiots all over the political spectrum. not every idiot is a Trump supporter. It;s just that trump has a disproportionate number of them. :)

You're bias is showing. Thanks for making us liberals looks stupid too.

She's not to blame for what she said? I get your joke... but it's almost as bad of taste as her comment.

I was joking! If people, with opposing views, could joke more, we'd be better able to put our disagreements into perspective. :-)

It seems like an intellectual property game of Chicken... and let's see who blinks first. The "entrepreneur" gambling with daddy's money or his own dot-com earnings? Or the starving artist no one expects to fight back due to limited resources.

This trend toward... admit nothing, deny everything, make counter-accusations when a hand gets caught in someone else's wallet... is is as ridiculous as current events.

I will never understand why people go to so much effort to do the wrong thing. Karma, however, always cleans up the mess in the end.

The thing is, the photographer is pretty well known and I assume has money (I know him). The other thing is with copyright law the defendant has to pay all the copyright owner's legal fees. So as long as you have enough money to weather the legal storm, you will see a nice payday because you will win in court. That's why most people settle out of court because $27k is nothing compared to what it could be if it actually goes to court....especially with a photographer who makes a shit ton of money commercially.

This guy has completely lost the plot. Mr. Dasilva, the people who you claim whose job it is to put images they take on the internet ARE PHOTOGRAPHERS!! People take pictures, put them out there for reason that are theirs. They don't want other people profiting from their work. Would you like someone to somehow profit from your online enterprise? I'll take that as a no. Notice, too, that comments are disabled for this video on Youtube. No sympathy here buddy. #0FG

If this imbecile kid is an "entrepreneur' - that makes me a rocket scientist guess.

Anyway, I actually pity the boy. He's comically dense and not aware of it.

And BTW, I like the way he brushed up his sleeve to show the tatoo. I pretty much stopped the video shortly afterwards, I couldn't stomach the cringeworthy stuff.

hopefully, when he grows up, he'll be embarrassed.

It's good your showing this-helps intellectual property victims understand the arrogance and mindset of infringers (thieves).

Ehm, having a YouTube channel doesn't make one an entrepreneur. Especially when you use it as a means to complain. It just makes you a good whiner.

When you plan to use any resource for profit, always assume a copyright exists. Not being able to find the author is no excuse as this guy found out. LOL, the author will find you! I also found it comical how he showed disdain for the methods used by photographers to locate intellectual property thieves.

I couldn't even watch the whole video, this guy is a twerp. Oh feel sorry for me! God, his attitude is so piss poor, what other bad advice has he given people!?

Alex Cooke, could you please name the photographer who successfully sued you. I would like to thank and congratulate him/her. I am a photographer who makes my living taking photographs and selling them. I guess you could call me malicious because I would happily sue you if you stole my work. What makes you think that you time is wiporth thousands, but the photographer’s image and their Tim is worth nothing. Pay up. Apologize. Keep you fingers crossed you don’t get sued for your rant. Learn your lesson.dont be a jerk (again)

Is your entire comment hinged on the title for the article alone. Did you not take enough time to read past the first sentence to see that the article is written about a man named Dan Dasilva who got sued by an anonymous photographer? Second paragraph, homie. The article quite clearly states the name of the person, who created the problem, in the second paragraph. In addition, did the fact that the article was written in third person not tip you off?

I like how he rolls up the sleeves - of his short sleeve shirt - at the beginning of the video.

He has a lack of respect for the photographers time, He gives no value for the time it took the photographer to create the image he stoled , but has the audacity to put a price for time he spent on dealing with the court situation. Because his time is money,

Jake Olson, Prince... now this one, I think the best explanation of this behavior is in this movie: http://m.imdb.com/title/tt0125664/
Sorry for bad English ✌

This guy missed the whole point and actually playing the victim like the photographer is wrong for suing him for using their image without consent to make money.
"Do you know how bad that it would look for his brand"
Doesn't he know it would look bad for him and he's the one that LOST the case!