Fed up with audience members filming the show with their phones, one musician stopped playing mid-song and turned their own behavior back on them.

The beauty of cell phones is that we have a camera everywhere we go. The danger of cell phones is that we have a camera everywhere we go (I can just feel the wedding photographers wincing). Science has already proven that taking pictures of an event diminishes your memory of it, and yet, we obsessively document events as if under some enduring and ceaseless obligation to do so. I'll be honest: I used to do this too, then one day, I realized I hadn't even looked at 90 percent of the photos and videos on my phone after I took them, and just as the linked study had shown, my memory of the events was sparse. Nowadays, I have the largest iPhone capacity, and I've barely filled 15 percent of it, as I find myself experiencing events more and more and taking videos with terrible audio quality less and less. As if by magic, I enjoy the events, I remember them more, and I'm better able to discuss them.

That's why I love this video of Red Hot Chili Peppers Guitarist Josh Klinghoffer. Fed up with the audience filming, he pulled out his phone and filmed them instead of playing a solo, looking visibly annoyed (see 3:32 in the video above). When asked about it, he told WAAF:

Phones make a lot of things easy. They also have stripped a lot of things of a certain innocence and excitement that I think made things special. It’s up to us to use these things in a respectful way. When I see people holding machines up and obstructing the view of the people behind them, I get angry. I’ve never heard a musician say: 'Oh man, I love looking out and seeing a sea of phones.'

I found the image of Klinghoffer staring in disbelief through his phone while several phones stared back rather poignant:

Do you pull your phone out at live events? Do you look at pictures you've taken afterward? I'm quite curious. Let me know in the comments.

I love how well this picture sums it up: 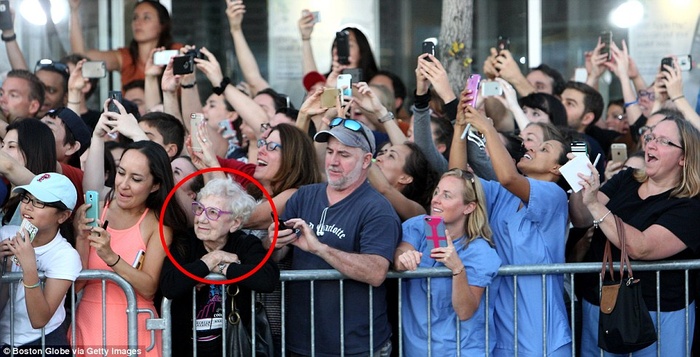 Part of this trend is probably down to the need to receive the gratification and approval of others for your actions rather than enjoying it for yourself first.
But otherwise no, I too enjoy watching the performance from that 4 inch screen held up in front of my view by those ahead of me to make sure I get a good view of those great HD pixels which are better than the real thing apparently.

you summed it up there, people don't film these things so they can watch it again, they film them to get social media likes, and whether you want to believe it or not, social media likes are the currency that the new generation deal in.
As a musician I hate this but until something else comes along to stoke their egos, the cameras are going to continue to come out (although I have heard of a few venues that now force you to seal your phone in a venue locked bag while at the show so you can't use it).

If they're only filming things to get social media likes then all I can can say is, what sad *****rds they must be. Of course I could just be an old fart... ;-)

I usually take a picture that has something big that says the band I'm seeing. Than I put it away and dance my ass off horribly. My brother has a video of me wailing around in the front row of Kings of Leon at Red Rocks. Having the time of my life. Yet here he is recording me and not enjoying the show.

I'm 50/50 on whether the band should being doing this.

Mobile phones were invented so people can communicate. But as much as it helped mankind, it's a demon on its own.
It's hard to imagine a life without it - but damn, I would love to experience those days again.

I thought this was great. It's nothing to do with him being mad that people are photographing and videoing. It's that people are so ridiculously addicted to their phones, that they can't enjoy a fucking thing with out them. They are more worried about recording the show on their phone to show their friends they were at the event, rather than enjoy the event. As a performer myself I watch people all the time watching shows through their phone screen, taking horrible photos and videos instead of actually watching the live action in which they PAID to see. Like what is the point of even being there to enjoy it through your phone? YouTube is way cheaper. But if you didn't record it I guess your 250 Instagram followers would unfollow you. Ridiculous.

Well, I get annoyed that I take portraits with high-quality equipment, take care to make my exposure perfect, my colors accurate, my focusing sharp--images that can be enlarged to 30x40 and gloriously viewed in awesome splendor...and then people just want to glance at them on cell phones. Ah, the pain, the pain.

At least they paid for it.

He films for 10 seconds, than drop the phone and goes back to the solo causing the audience to cheer even louder. I get the point he was trying to make, but he clearly failed at making it effectively.