A photographer and influencer has been heavily fined by authorities after driving his car into a protected geothermal area of Iceland before getting the vehicle stuck. Following the incident, he uploaded photos of himself posing in front of the car to his Instagram page.

Alexander Tikhomirov took it upon himself to go off-roading within the protected area of Mývatn, which eventually saw his vehicle become stuck in soft soil, reports The Reykjavík Grapevine reports.

With over 320,000 followers, the post has currently garnered more than 11,600 likes and is accompanied by a significant number of negative comments: “If destroying nature and leaving marks that will deprive future visitors/generations of the beauty of a place is your idea of fun, then I am sorry for all humanrity” read one, while another called him out for “posing at the scene” after being fined.

Aside from certain designated trails, the act of off-roading is illegal in Iceland. Fines are in the region of thousands of dollars. Northeast Iceland police went on to confirm on social media that they towed Tikhomirov’s car out of the geothermal area and did indeed fine him. They also released photos showing the deep tracks left by Tikhomirov. 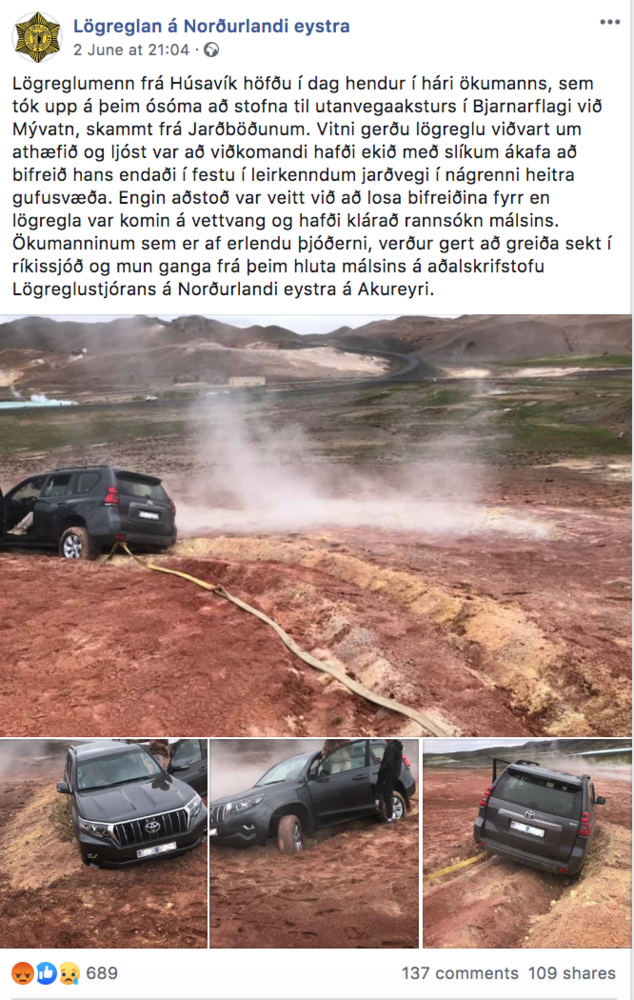 [Off-road driving] can do extensive damage to the country’s fragile topsoil, and the cost and labor of repairing the damage almost invariably fall upon the locals. Despite an extensive information campaign warning tourists to stay on marked roads, it continues to be a widespread problem in Iceland.

Social Media / June 5, 2019
Dear YouTube Influencers: Sorry, But If You Received Your Gear for Free, Your Video is Sponsored

Well, to be honest, I believe that there are a lot of idiots everywhere. In Portugal, where I live, a buttmunch climbed onto a 300 year statue, for a selfie, made the statue fall and broke it into pieces. Nothing important as it was one of the few statues of D. Sebastião, one of our kings.
As for ruskies, I know a few and they are pretty decent people.

Yes and you maybe didn't read everything I wrote. The comment was made in response to what happened...and it was by 'ruskies' as you say. If they were from somewhere else....then the 'a lot of idiots everywhere' would apply. I know more than a few who are descent. Please read more carefully.

Did I hit a nerve?
Don't get the agressive tone, I've read carefuly and left my reply. Actually I've agreed on your comment.
Here where I live, we have the same opinion on Chinese, Americans, Russians or whomever. A lot of these so called influencers are a damn problem.
Even Madona wanted to ride a horse on a 300 year old Palace!
So stupidity knows no boundaries, nor social classes.
I know a few russians, because where I live 99% of the population is Portuguese or from a Portuguese ex-colony (and stop thinking my country is part of damn Spain, it is not), so it is not easy to find a russian, but those I know and deal with are good folk.
The dumbwit who broke the statue is portuguese! Again, stupidity knows no boundaries.

No...there are no nerves to hit. When I was a POW they took care of my nerves. If it sounded prickly then I am sorry. Have a lot on my mind lately. Have a nice day sir and thank you. Sometimes I need a wake-up call.

Sir, sometimes we are in the deepest of the holes. Sorry to hear about your experience, and as an european thank you for your service.

The world needs a browser plugin that automatically replaces the word "influencer" with "moron".

Happens everywhere. Not too long ago, in Yellowstone, a couple of tourists from another country decided to get of the boardwalks and wander about on the very delicate surface around Grand Prismatic Spring. They were caught, fined, and I believe they were deported to their home country. There's always someone who thinks they are better than the rest of the world and therefore above the law.