A near horrendous tragedy in Dallas saw photojournalist Tom Fox photograph the shooter from mere meters away, looking directly in to the lens.

After watching documentaries on, and exhibitions of, Don McCullin, I have untold respect, admiration, and a dose of disbelief for the courage photographers in war situations have. One naturally wonders where we — if put in a similar situation — could photograph the scenes, or would focus on the preservation of our own lives. Well, photographer Tom Fox of The Dalls Morning News has had an unwanted chance to find out.

Yesterday morning a gunman attacked the Earle Cabell Federal Building. He was heavily armed and dressed for warfare, and immediately started firing. Photographer Fox who was near by, captured some of the scene on his phone, but also managed to take a photograph of the gunman exiting the building. Just meters away, the gunman stared right in to Fox's lens, whose life over the next few minutes hung in the balance. 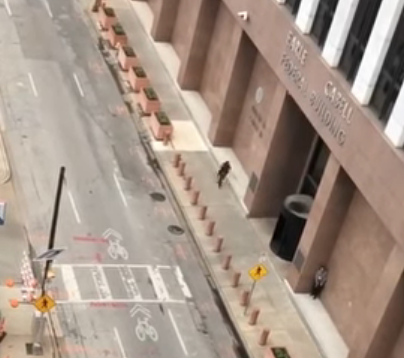 Photographer Tom Fox seen behind a pillar just meters from the gunman.

The image is haunting, particularly due to the eye contact. The man is heavily armed, and clearly out to kill. Thankfully, however, the only casualty of this event was the gunman himself who is said to have died at the scene.

What would you do in this situation? Was Fox wrong to take the shot? Is it Pulitzer Prize worthy?

Posted In:
News
Photojournalistic
via:
The Dallas Morning News
50 Comments

Wow. That would be terrifying.

That's a photo you don't say lacks contrast and washed out looking. Damn.

These radical caucasian terrorists are a threat to the American way of life. One hell of a photo, however!

Downvoting a comment against terrorists? Wow didn't realize there were so many Anti-American people on Fstoppers!

You're being downvoted because you are being a smartarse, and you know it.

Boy, these radical caucasian terrorists are a threat to the American way of life. Looks like he lost his MAGA hat somewhere along the way too...

Caucasian isn't an ideology. The fact he is white doesn't make him more or less inclined to shoot people. That's a racist assertion.

White supremacists, Islamic jihadi, Christian radical zealot, or just another weirdo loser who wants fame in anyway he can get it. Learn the difference, it is rather significant.

OK then, he's a right-wing white supremacist asshole. About the only good news from that event is that he's dead.

Can't disagree there. Neo-Nazis, White supremacists, & other racists shit-heads are all gutless bullies in my experience.

I'm glad you were entertained by my comment. This is in fact an art based site after all. How about we just agree to disagree and give the photographer the praise they rightly deserve?

"You have no proof that he was right wing." Except that I do, by his own admission: he posted an image on his Facebook page only a couple months ago where he considered a combination of libertarianism, authoritarianosm, and yes, the far-right as "the solution to our nation's problems." He also added a swastika for extra measure. Look it up.

You have a piss poor understanding of history too, BTW. The confederate flag as symbol of the left? Must be why Mississippi––that bastion of leftist liberal progressivism––still has it on their state flag, lol!

You can apologize for being racist at any time.

Which party is that? Are you so simple-minded and binary to thing that if I denounce right-wing extremism I must be a Democrat? And are you also so stupid to think that the modern Democratic and Republican parties are linked by anything but name to their mid-19th century equivalents? Take your own advise and "pick up a history book" yourself. I recommend anything by a peer-reviewed professional and/or academic historian that details Goldwater and Nixon's "southern strategy." Do you know what that was?

And I haven't heard a "thank you" from you for giving you proof that this terrorist shooter was right-wing. I'll wait...

Maybe just apologize for being a racist and move on.

I didn't say they "switched sides." This isn't football; it's far more complex (but I can see complexity isn't your forte).

Did you look up the history of the southern strategy before denouncing it as leftist propaganda? Nope, because you're a closed-minded fool who is frightened by any information that challenges their own bias.

You have no idea what political affiliation or philosophy I espouse (I'm a Log-Cabin Republican, if you'd like to know), but I do know that the shooter believed in right-wing authoritarianism because he actually said so. I use facts and evidence to form opinions, rather than your dumbass method of toting a political line and regurgitating baseless catchphrases like a sheep. Or more aptly, like a dog! lol

I have a novel idea: Stop being racist. .

Oh good, you're not going to comment again so I get the last word! And if you do comment, I'll add "liar" to the list of descriptors of you.

You have absolutely no idea what the terms you throw around actually mean, or the history you purport to understand. LGBTQ people have equal rights? What a stupid thing to say. The most recent national GOP platform (2016) still opposed same sex marriage in this country. Which is why actual progressive Republicans––as opposed to your meaningless and hollow claims of progressivism in the rank-and-file–need to fight for inclusion and equality. You'd know this if, again, you weren't a goddamn idiot.

And please, learn how to properly capitalize terms. The conservatism you claim to be proudly associated with is not capitalized because it is not a proper noun; there is no national Conservative Party in the United States . And capitalize "Republican" and "Democrat" when you speak of the parties. You may think this is splitting hairs, but anyone who truly understands the differences and intricacies between complicated political ideologies and malleable political parties would do this. Which again, due to your ignorance, you do not.

Ask your dog Blue to explain these issues involving political philosophies, racism, and American history to you. You listen to him, and according to you, he is very well versed in such complex concepts. Plus he's far smarter than you, obviously.

I'll end with a final relevant point: the shooter in this article's image was a far right terrorist. I know this because––even though you continually ignore facts that scare your simple understanding of reality––he straight up said that the far-right was part of "the solution to the nation's problems." Truth hurts, Brandon.

Deleting your comments now? What a coward. Grow a pair and stand by what you write next time.

You know what great about the comment you deleted here? You accused me and other "leftists" (which I'm not) of revising and removing the past to suit our needs. That's some irony, bucko.

In case anyone is interested: Brandon decided to retroactively remove all of his accusations and inaccuracies from his posts and just call me racist. Class act.

Take a hint you racist idiot. No one cares about what you have to say. My comments were deleted to hopefully get you to go away since there isn't a mute or block option on this site. Take a flipping hint. How stupid are you? < That is rhetorical, don't actually answer it.

Stop responding to me. You are acting like an obsessive teenage girl. If you don't stop harassing me I'm going to report you.

Final warning. Take your racist self on somewhere, clown.

You know adults can just ask someone to stop responding to them without having to resort to threats. Or you could just ignore the person.

But please, go ahead if you wish and report this conversation so the admins can see all the harassment and things you called me as well, including those you deleted where you mocked me for being a Log Cabin Republican because according to you, LGBTQ people already have equal rights.

Or you could just let it go. I'll stop responding to you now since you're so upset.

Lighten up, Francis. White supremacists, radical Islamic terrorists, etc. are all a threat to the American way of life too. But this article was about a radical caucasian terrorist (and there are a slew of others as well), so that's who I mentioned. I have equal disdain for all terrorists, and I wish others would as well.

What relevance does him being Caucasian have?

You're being snide while feigning concern about terrorists. In any case, this is a photography site, if you want to argue about "Caucasian terrorists" or any other security issues perhaps you can head on over to Reddit or that cesspit /pol

Feigning concern about terrorists? Hardly. Read my last comment. Just because you're offended doesn't mean I have to be quiet, and last I checked you aren't the arbiter of communication here. If you have a problem with what I'm saying perhaps you should just ignore it and call it a day.

"Just because you're offended"

The familiar last-ditch attempt to salvage some dignity on your part. Using violence and terrorism to grandstand about race issues, especially in the sarcastic way you did it, is rather repellent.

In that sense, I am somewhat offended, but I doubt that was the offence you were imagining I was experiencing.

Spare me you’re familiar holier-than-thou horseshit buddy and grow some thicker skin. And yes, you’re knee jerk fear of discussing anything involving race is exactly the type of feigned outrage and offense I expected. You’re rather predictable, and boring. So I’ll take my own advice and ignore you!