An award-winning photojournalist stands accused of faking a series of images documenting hit men carrying out acts of violence in Honduras. It is alleged that Swiss/Italian photographer Michele Crameri staged several shots of men wielding guns and threatening to kill people, following revelations from the Honduran fixer who helped him gain access to local gang members.

Between 2015 and 2018, Crameri made four trips to Honduras to document hit men working for gangs in the city of San Pedro Sula. Entitled Sicario, a job like any other (warning: graphic content) Crameri documents crime scenes, police investigations, funerals, friends and family mourning their loved ones, and one graphic shot showing a recently murdered victim. Crameri also presents a number of images of the sicarios — hitmen — wielding guns and threatening individuals as part of extortion rackets being carried out by drug cartels and other crime organizations.

Assisting Crameri during his early visits to Honduras was Orlin Castro, a local journalist whose work reporting the turf wars on the streets of San Pedro Sula was documented in 2015 in this documentary from Vice News. A few months ago, Castro became aware that Crameri’s published project — now the winner of various awards — included some problematic images.

Two photographers — Tomas Ayuso from Honduras and Francesca Volpi from Italy — have both worked with Castro and are now speaking out against Crameri’s alleged fakery. “These are posed portraits alongside fake captions and completely staged pictures of scenes of criminal violence, all wrapped neatly with a narrative of ‘Killers in Honduras have part-time jobs,’” Ayuso explains.

In 2016, working as Crameri’s fixer, Castro took Crameri to a house in San Pedro Sula to meet with several sicarios. During the visit, Castro, who has working relationships with various gangs as part of his role as a journalist, was joking with the hit men, asking them to show him how they executed someone. Crameri photographed the resulting scene and published it with a caption that is now said to be patently false. 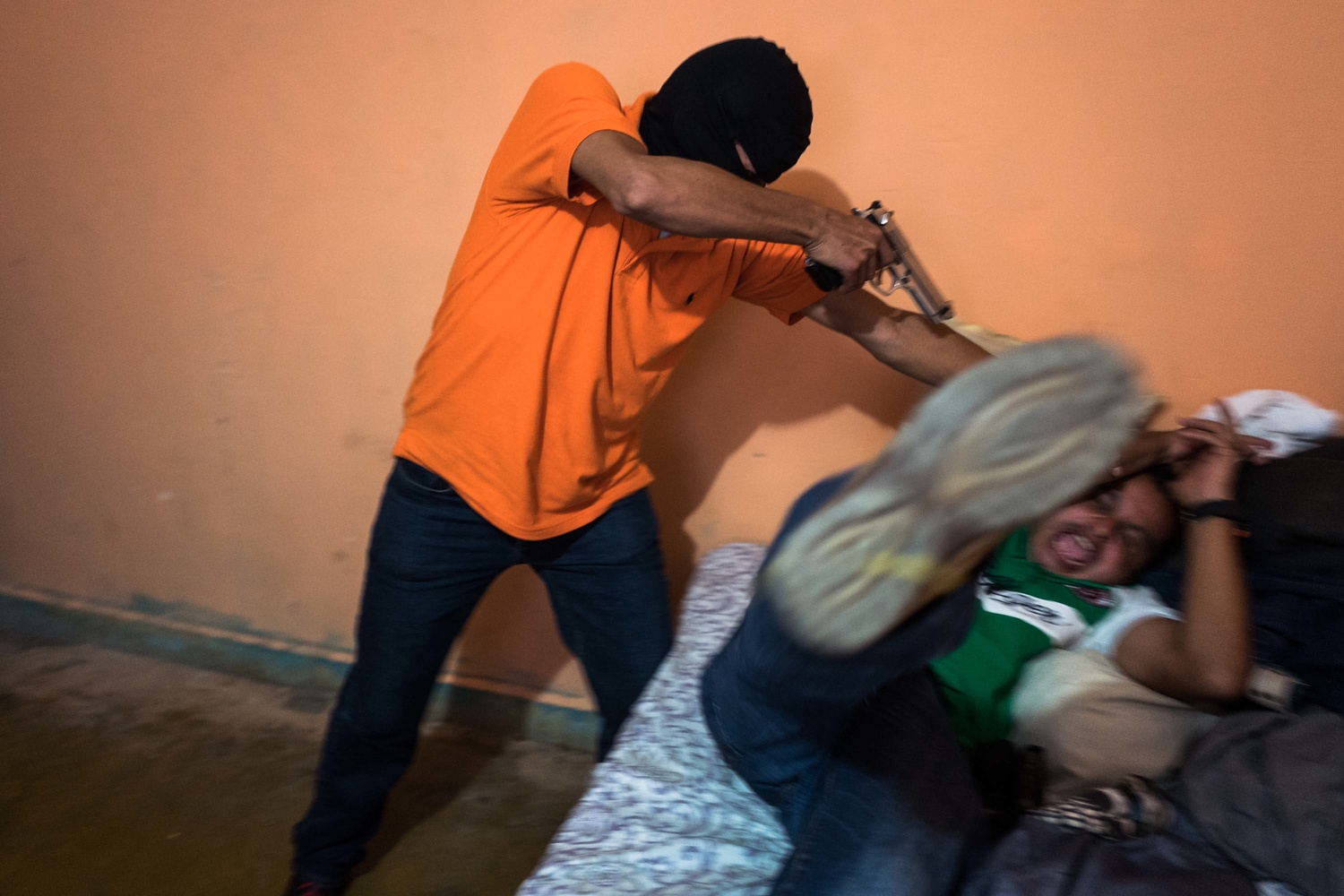 Screenshot from https://www.parallelozero.com/sicarios/#gallery-9, from photographer Michele Crameri's project "Sicario, a job like any other".

Col Central. Pedro, taxi driver by day, Sicario by night. The gang boss is threatening Eduardo in order to get information about his brother Carlos, a rival to Pedro who, for more than a month, has not paid the fee (extortion) for being able to do his job in the area where the two work. After being threatened, Eduardo will call Carlos.

Ayuso and Volpi state that this photograph was not taken in Col Central, that the hit man is not called Pedro, and that the man being threatened by the gun is not a man named Eduardo but the fixer, Castro. Having discussed the images extensively with Castro, Ayuso and Volpi also say that the first image in the series — a man in a striped top pointing a gun at a supposed victim while another man in a blue t-shirt stares into the camera — was also staged. The victim in this photograph, portrayed with his arms dramatically in the air, is alleged to be another hit man, again fooling around for the camera. 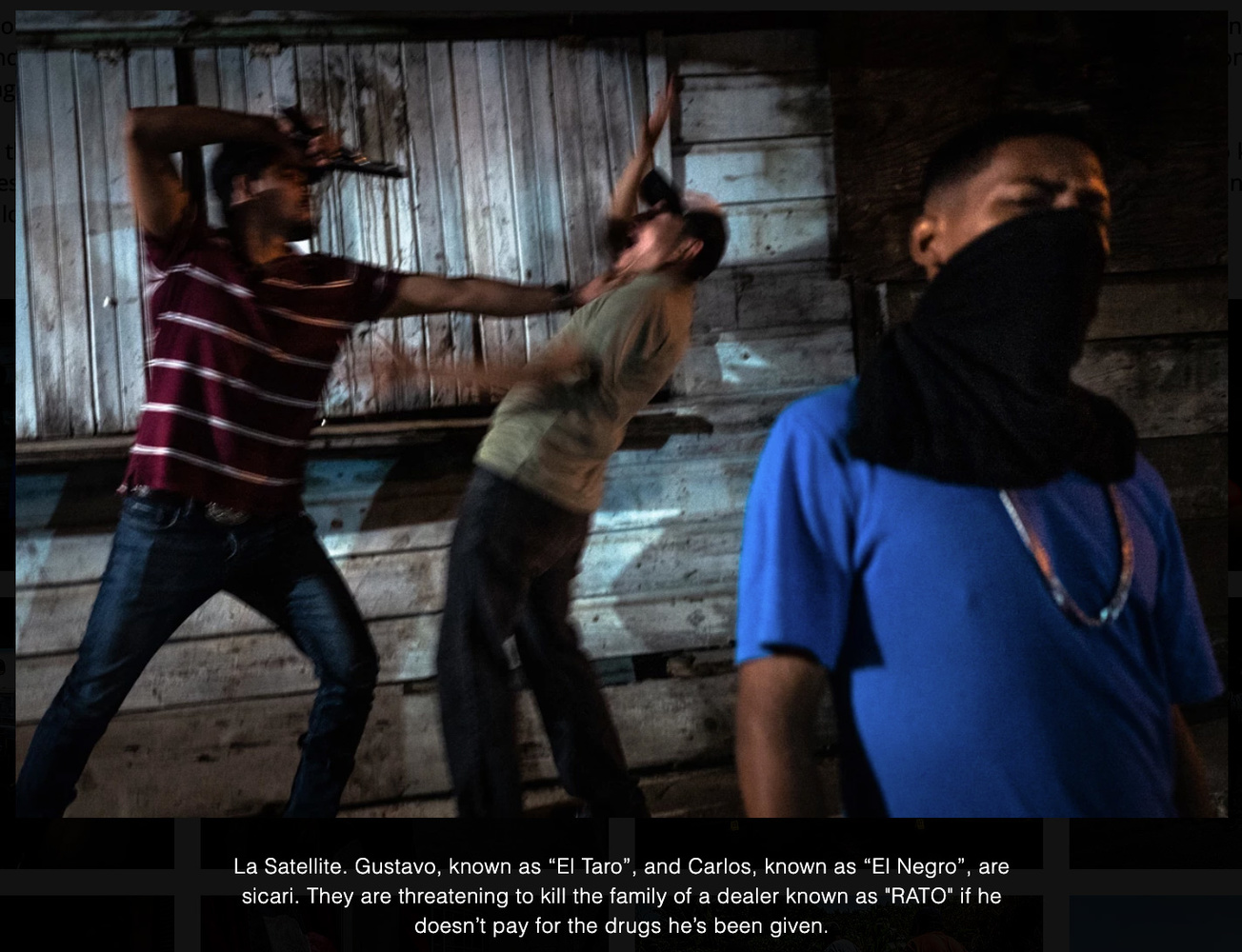 Another of the images shot by Crameri shows a gang member standing in front of a victim’s car, pointing two guns at the windshield. 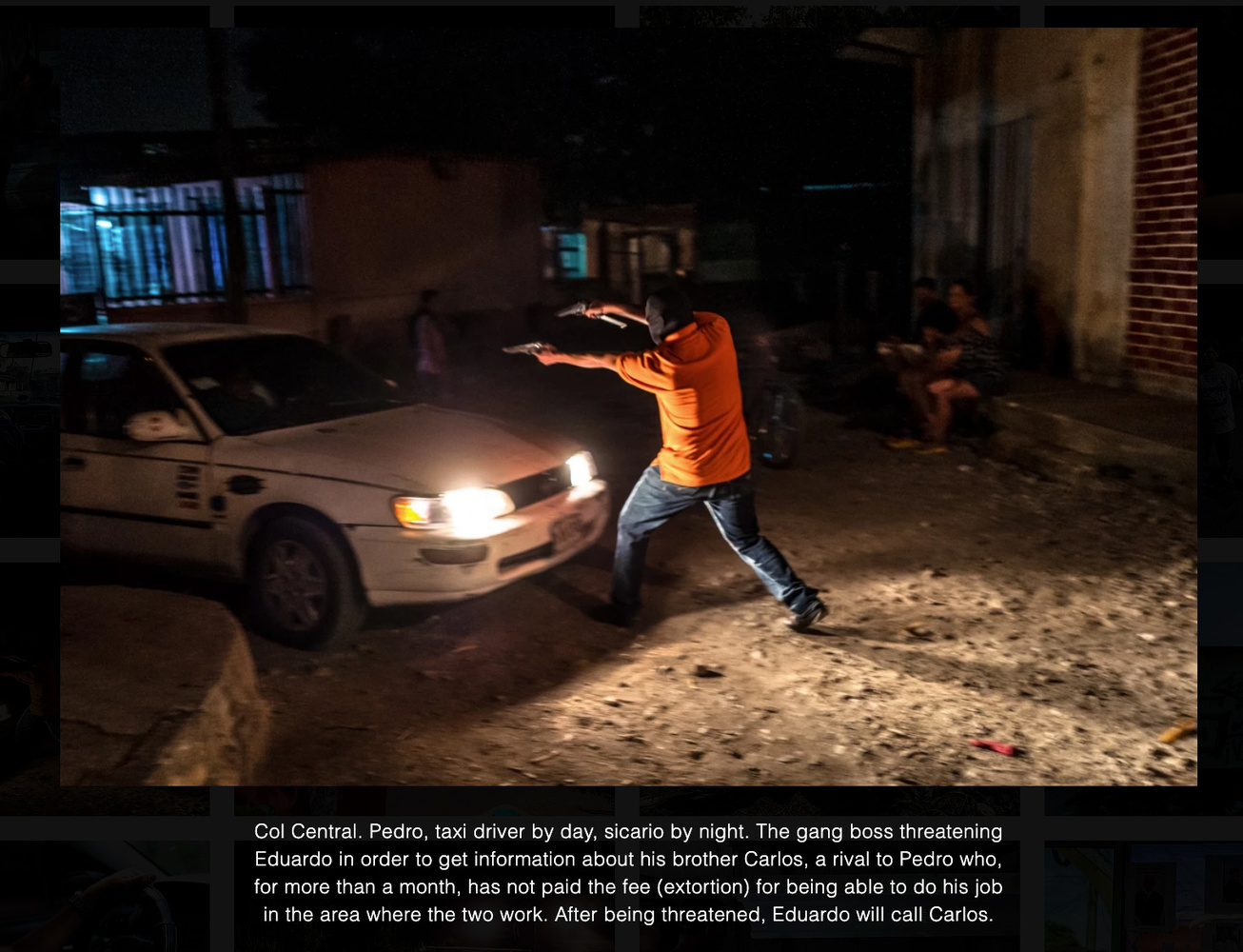 Ayuso explains that this car actually belongs to Castro’s colleague and was used by Crameri during his time in Honduras: it was a taxi, but it was not driven by a man named Carlos. Instead, Crameri traveled in this vehicle to the location where the photograph was taken. The images below show the fixer’s car, as photographed by Ayuso on May 27, 2015, and then as photographed by Crameri for his Sicario project on October 8, 2016.

While working for Crameri, Castro was told that the staged images of the sicarios pretending to threaten people would only be used for Crameri’s personal archive. The fixer says that he specifically told Crameri not to publish the photograph of him being jokingly threatened with the gun.

While those depicted in Crameri’s work are genuinely sicarios, Crameri stands accused of inventing his captions in order to create a compelling story, one that has since gone on to receive broad recognition. Since 2017, Crameri’s website reports that the project has won 15 awards, including being recognized as a finalist by Lens Culture’s Visual Storytelling Awards 2019.

Crameri received questions about his project in March when people contacted him via social media to accuse him of inventing his story. Since then, more details have emerged. Crameri has responded to my enquiries via email and stated that the images were not staged. He did not respond to repeated questions about whether the man in the green t-shirt having a gun pointed at him was in fact his fixer. Furthermore, Crameri did not respond to repeated enquiries about the taxi seen in another picture.

I also contacted Parallelozero, the agency which represents Crameri. They replied to say they had conducted their own investigation and were satisfied that Crameri’s work was legitimate*. Asked if they had contacted Crameri’s fixer or anyone else in Honduras as part of their investigation, they twice declined to answer.

Photojournalists are typically expected to comply with strict ethical standards when it comes to editing their photographs. While light editing (color, tones, contrast) is permitted, anything beyond that is deemed dishonest unless openly stated. Agencies such as Parallelozero play a significant role in giving photojournalists gravitas, helping to give them access to incredibly sensitive subjects, and creating an assumption of integrity that invests the images with credibility and greater weight as objective records of events.

[July 3, 2019: Parallelozero states that it terminated its contract with Crameri following the emergence of the taxi photos through this article and as a result of an internal investigation.]

If the allegations are correct, critics will see this as another instance of photojournalism’s tendency to treat “lesser” countries as a playground for comparatively wealthy Western photographers chasing heroic status as a reporter by exploiting the apparent suffering of their subjects. There are growing calls for agencies, competition juries, gallery curators and editors to start giving greater recognition to local photographers rather than repeatedly rewarding those who parachute into a story, capture some photos, and leave before going on to win various awards.

If you have more information about this story or any other instances where you believe that photojournalism’s ethical standards have been breached, please contact me through social media (Twitter, Instagram) or via my website — andyday.com.

This article was edited on June 22, 2019 to include a more accurate composite image depicting the Toyota Corolla.

* 2 July, 2019: Parallelozero has asked that it be noted that when first contacted by the author, they informed him that they would be happy to review any evidence. Andy Day apologizes for this omission.

Opinion / June 12, 2019
Photojournalism Is an Afterthought in Journalism Education, and It Shouldn't Be

When I first looked at these I'm thinking, Yeah, probably staged. Then when I came to the guy with the dual guns pointing them at the taxi like he's straight outta Hollywood, Yeah, definitely staged. If ever I were the target of a gun wielding assassin I could only hope that they came at me that way so as to maximize the probability of my survival.

This is so sad. As a former photojournalist who started in the business shooting film I used to believe what I saw and thought others had the same sense of integrity. Just have to add this clowns name to the long list of clowns caught faking news photos. People wonder why Trump resonates with the public. Journalists are killing journalism.