Does Holding a Fuji Camera Give You a License to Be Obnoxious?

A strong critical reaction has led to Fujifilm pulling an advertisement that highlighted the work of photographer Tatsuo Suzuki. It seems that holding an expensive camera is not a license for an obnoxious and provocative style of street photography.

Fuji Rumors reports that Fujifilm published the seven-minute video as part of a series of short films promoting the launch of the new X100V. Entitled “My Milestone,” the video documented the work and methods of Suzuki, a street photographer who shoots with an intrusive, almost aggressive style. In the video — deleted by Fuji but since re-uploaded elsewhere — Suzuki is shown blocking the path of pedestrians, prompting people to turn away or even cover their faces.

The original video was deleted by Fuji but since re-uploaded to YouTube. A copyright claim from Fuji may see this version removed at any time.

This style of shooting is reminiscent of photographer and self-confessed provocateur Bruce Gilden who established a reputation for in-your-face flash photography. “I have no ethics,” says Gilden, proud of his supposed bravery for the proximity of his images, essentially explaining that he is so arrogant that he doesn’t care.

Suzuki lacks the flash but not the antagonism. As he explains in the video, his intrusion of space creates tension by breaking into a person’s private space. He is fully aware that his behavior is offensive, but of course, the photographs make it justifiable.

In a recent article, I asked how this behavior would be judged if the likes of Gilden and Dougie Wallace were not holding a camera, but instead simply confronting people at random in the street. Why does this revered, expensive, magical box vindicate this manner of acting in public? Why are the resulting images so revered by the art world, pouring praise on a photographer for “pushing boundaries” and “creating insights,” when every photograph says a lot more about the photographer’s ego than it does about the reality of life on the street? 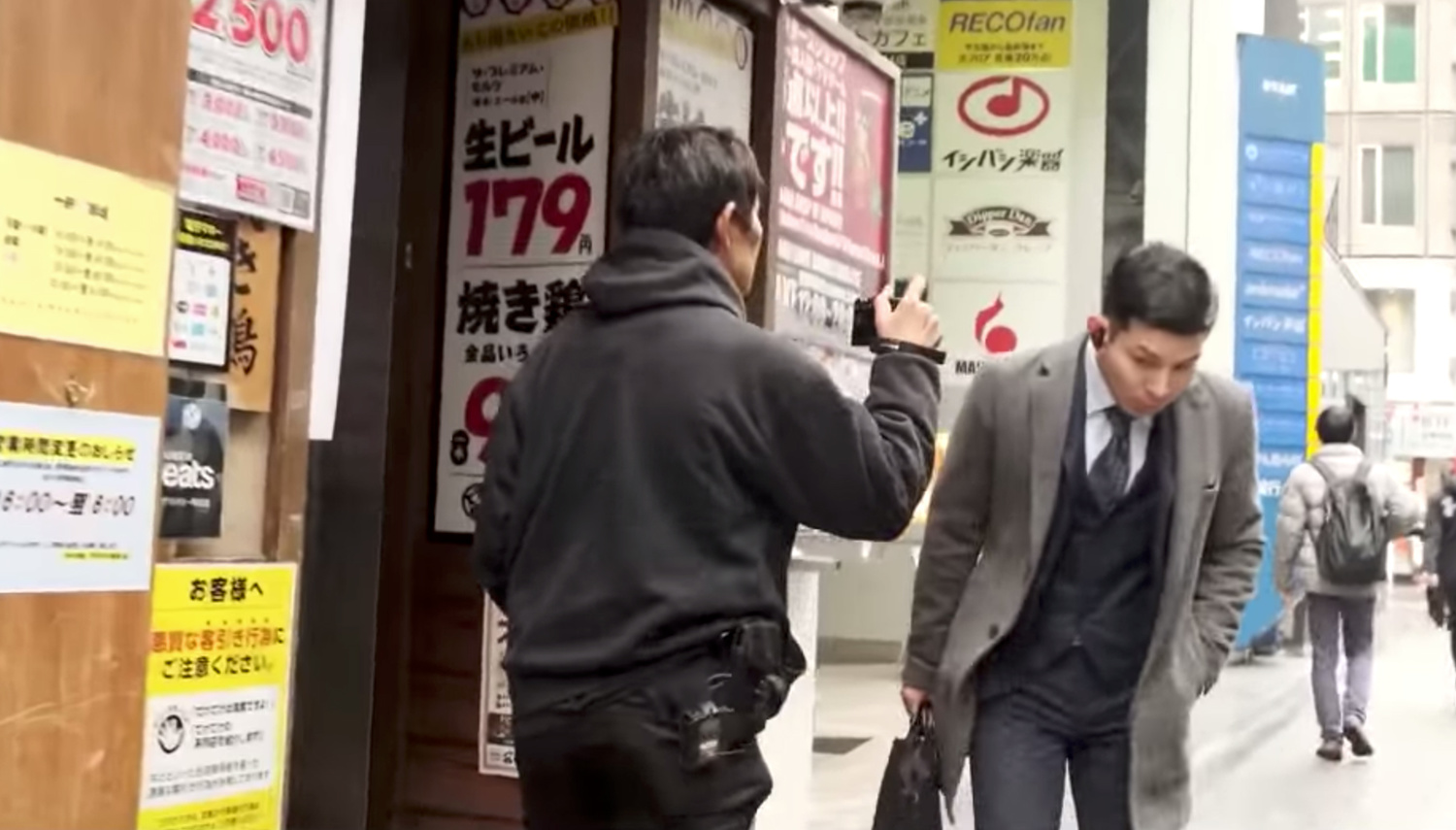 Screengrab of Suzuki in action from "My Milestone."

The concept — elevated by the likes of Magnum and the art world in general — of the photographer as a big game hunter, a heroic, often hyper-masculine figure who bravely sets out into the world to deploy his mastery over technology to create art is one that has become tired. The online reaction to Suzuki’s work is an indication that audiences are starting to see beyond the surface of the resulting images and into the arrogant, ego-driven unpleasantness that goes into their creation. Social media has helped to undermine their heroism, revealing the nastiness, vanity, and smugness that the galleries and books fail to convey.

The convenience for the obnoxious street photographer is that the image is a snapshot of a moment caught just before the unwitting subject reacts to this invasion. Photographs are typically that moment of confusion before realization, annoyance, and intimidation kick in and subjects are rendered helpless. The moment the photographer wanted is complete, ripped away from the consequences that the photograph so conveniently ignores and overlooks. The image is taken (in both senses), the photographer’s braggadocio is bolstered, the resulting image is more important than the process. The ends justify the means, and the photographer’s expression of power is complete.

Until now. What was once deemed heroic is now seen as pathetic. The photographer’s ego is revealed and found vile. An unpleasant taste sours every image, as though the overblown ego is a sepia tone that washes every single photograph.

Fuji’s blindness to this was surprising, and the reaction is entirely justified. Intrusive street photography is a power trip that belongs in the past.

Opinion / August 29, 2019
In Your Face: When Street Photography Gets Too Close

Creeper cop with a zoom lens

I just think it's unnatural and disrespectful to have your personal space intruded like that, and it all depends on the type of person and the situation. If someone shoved a camera up my nose I'll probably just act silly, I'm more worried about a gun shoved in my face TBH.

"The online reaction to Suzuki’s work is an indication that audiences are starting to see beyond the surface of the resulting images and into the arrogant, ego-driven unpleasantness that goes into their creation."
Nah, not at all.
The online reaction is an indication that society is becoming increasingly pussified and what once was considered an odd or at most annoying behavior (Bruce Gilden's entire career) is now deemed offensive on the borderline of criminal.
If you are afraid of being traumatized by someone taking picture of yourself on the street then just stay home forever in your little bubble of a safe space and eventually die right there as a miserable person.

The author has got this wrong. Too much psychoanalysis. I don't see any ego or power trip here. It's simply an artist trying to make his own type of picture. Nothing more. Yes, he gets in people's way, but it's not because of ego or power. It's just a search for pictures.

So please stop judging an artist with your self-righteous keyboard warrior hipocrisy.
Is simply out of place.

art is respect for the subject. not blocking them on the street and shoving a tiny sensor in their face and then flashing them with a crooked, creepy smirk...all for the purpose of glorifying fluji cameras as the one camera street warriors.

More pompous rubbish about Art, you should consider becoming a wine taster, you would fit in well.

so REVOLUTIONIST, being part of an ad campaign to sell consumer electronics!

Ryan Ringstad He was an artist before and not just since Fuji discovered him.
Yin Ze Its just his process and has nothing to do with disrespect, his process is art itself. Art is a guy painting pictures with his penis, art is a chick that rides a bus naked, art is a picture that gets shredded at its auction.

That is BS. My parents made a living as artists. I grew up with artists all around me from early childhood. A lot of them were pompous, self-promoting, inconsiderate asses. I don't think artist live in a special world all their own that allows them to tramp all over other people for the sake of "innovation" and being "revolutionary." Usually that kind of talk is used to promote mediocre artists who don't have much to offer in terms of talent.

I'm not a fan of this style of street photography, mainly because a lot of images will end up looking like shock photography, where the subject looks surprised or annoyed that you took their photo. That said, as long as you are taking photos of people in the public, its all invasive, just to different degrees.

Definitely kind of lame that fuji pulled this guys video just because some people don't find his style of shooting agreeable.

I have zero sympathy. Fuji as someone pointed out "They chose him, filmed this project with him, and published it while consciously knowing who he was, and how he worked. Then, they completely separated themselves from him when they received the backlash.". IN OTHER WORDS FUJI TREATED SUZUKI THE SAME WAY SUZUKI TREATS HIS SUBJECTS!

I find Tatsuo's work interesting. I'm not a finger-wagger by nature so I tend to withhold judgement on other people's actions until someone is being harmed.