Sure, I dig gear reviews, image processing tutorials, and seeing what others are doing with photography just as much as the next person, but today I want to talk about something a little less tangible yet possibly the most important thing when it comes to landscape photography: how does the location feel?

I have been fortunate to travel to many unique spots in the United States and around the world and one thing I have realized is that places have spirits. That’s difficult for me to admit because I am a fairly scientific and analytical person. I’m not talking about the ghostly kind of spirit, it is more of a presence. Perhaps it is because we are predisposed to have certain feelings given the history we have learned. Maybe it’s because friends have passed along stories of creation, battles, and hardships? It could be that certain people have an intuition about the universe that is difficult to explain. Whatever it is, I definitely have felt it when out on photography expeditions.

I can’t say I’ve experienced it everywhere. While some locations may have an incredible natural beauty, which I can definitely appreciate, they don’t come with that same spine-tingling feeling as others. That doesn’t mean that I can’t get into the scene and find compositions that are worthwhile. I can. It’s just that some locations will be a bit more memorable and they’ll probably be the first ones I talk about when asked about my favorite places to shoot.

One such spot is the top of Pu’u Poli’ahu, a volcanic cinder cone on the summit of Mauna Kea on the Big Island of Hawaii. In the Hawaiian creation story, Poli’ahu is one of the four goddesses of snow who are also the archenemies of Pele, the goddess of fire. Reaching the top of the pu’u takes some effort since it reaches over 13,600 feet above sea level. At that altitude, the thin air can make it a difficult climb for many people. Once you’ve reached the small plateau that sits at the peak of the pu’u you are treated to a 360-degree vista like you have never seen before. Especially if you do the trek at night. From there you can see the blazing orange vents from the Kilauea Volcano, the lights from towns all around the island, and the world-class observatories on Mauna Kea itself. The real pièce de résistance is the spectacular glow of the Milky Way. Seeing it from above 40 percent of Earth’s atmosphere in the middle of the Pacific Ocean is like nothing you’ve ever witnessed. And yet, to me, there was much more there in that freezing, wind-blown, arid environment than just what my eyes could see. Being a writer and a photographer, I wish that I could find the words but there are none. All I can do is encourage you find special places like Pu’u Poli’ahu and take the time to sense the spirit of the land.

The winter Milky Way arches over the Pacific Ocean in this 360-degree panoramic as seen from the top of Pu'u Poli'ahu on the Big Island of Hawaii.

Work With What You Have

Sometimes you arrive at a location, check it out, and just can’t seem to find a single composition that works for you. This happened to me last year on a short jaunt into the Toadstool Hoodoos in southeastern Utah. After hiking in along a wash for about a mile, the hoodoos came into view and I was truly excited to get to them and see what I had to work with. I began scouting for interesting features in the cliffs, in the hoodoos, in the sand, and anywhere else that I could reasonably reach. Disturbingly, absolutely nothing felt good. It was late in the afternoon and I had packed in gear so that I could stay out until three or four in the morning, allowing me to shoot both the sunset and some nightscapes. Instead of just giving up, I took off my backpack, grabbed a bottle of water, sat down on the rocks, and closed my eyes. I listened to the wind blowing across the desert. I heard the calls of coyotes looking for an evening meal (hopefully not me). I caught the smell of a desert rain shower not too far in the distance. I stayed in that spot for at least 20 minutes. I won’t say that it was meditation, but sitting there soaking in senses other than sight really seemed to clear my head. Things immediately felt different and I began to look at compositions that I may not even typically shoot. In fact, I didn’t even shoot the hoodoos until later in the evening. Overall, the photographic results of that adventure were pretty good. Granted, none of the images that I captured on that excursion are going to win any rewards. But more than coming away with new shots for my portfolio, I emerged with a new tool that allows me to see a location with a clean slate when I just am not feeling it. 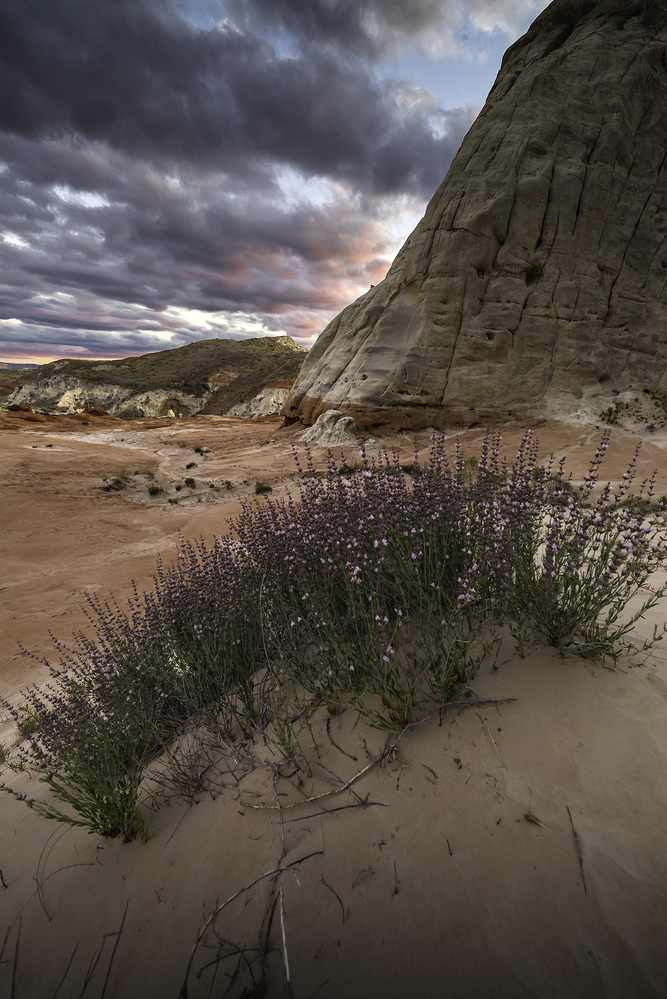 Pretty desert flowers match the hues of sunset at the Toadstool Hoodoos in southeastern Utah.

Don’t Be Afraid to Leave

I’ve written about places that have a special feeling as well as places where I eventually found a feeling. But, what about locations where you simply are not inspired at all? It happened to me on a first time visit to Mono Lake recently. As usual, there was that Christmas morning sense of excitement as I saw more and more signs telling me that I was getting close to the lake. Finally, it came into view and I made my way down to the parking area. The large, highly salty lake has a unique beauty thanks to the incredible limestone tufa towers than line parts of the shore. I am certain that on 99 out of 100 days I would find tons of cool compositions but, on this particular day, I didn’t see anything. I tried to apply some of my “I am not feeling it” techniques to see if it made a difference. I walked all around taking in the scenery. I sat down on the boardwalk, closed my eyes, and listened. I even tried talking to some other photographers to see if they said anything that would motivate me. In the end, it was just not happening. As I walked back to my car, I decided that the place I needed to be was the Alvord Desert in southeastern Oregon, about eight hours away. After having already driven four plus hours earlier in the day the thought of high-tailing it 450 miles north wasn’t hugely appealing, but it needed to be done. I arrived at the Alvord Desert just as the sun was setting. It was a familiar location since I had been there a few times before. It is also one of those special places for me. The light always seems to be spectacular, the landscape is as unique as it gets, and the remoteness makes it seem like you have it all to yourself. What a feeling.

The Milky Way over the cracked landscape of the Alvord Desert.

I’d appreciate seeing your feedback in the comments about the things you do to find inspiration when on location and also if you have go-to spots when all else fails.

Life is good and it's always better when we capture the essence and our vision. Great article Steve.