Fast and reliable portable storage is a must-have for today's mobile creatives, and the big players in the space have been producing increasingly compact and speedy drives every year. In today's review, we'll be taking a look at Caldigit's new Tuff Nano portable drive.

As a quick recap, Caldigit has made a name for themselves by releasing products that have no compromises on their specs. From their original Tuff hard drive to the SSD model of the same drive, whatever was possible at the time was incorporated into these products in terms of speed and connectivity. They have also included IP57 ratings and drop resistance with each of their drives, which my tests confirmed. Even the spinning drive could be dropped off a moving motorcycle with no data loss (don't try this at home!). 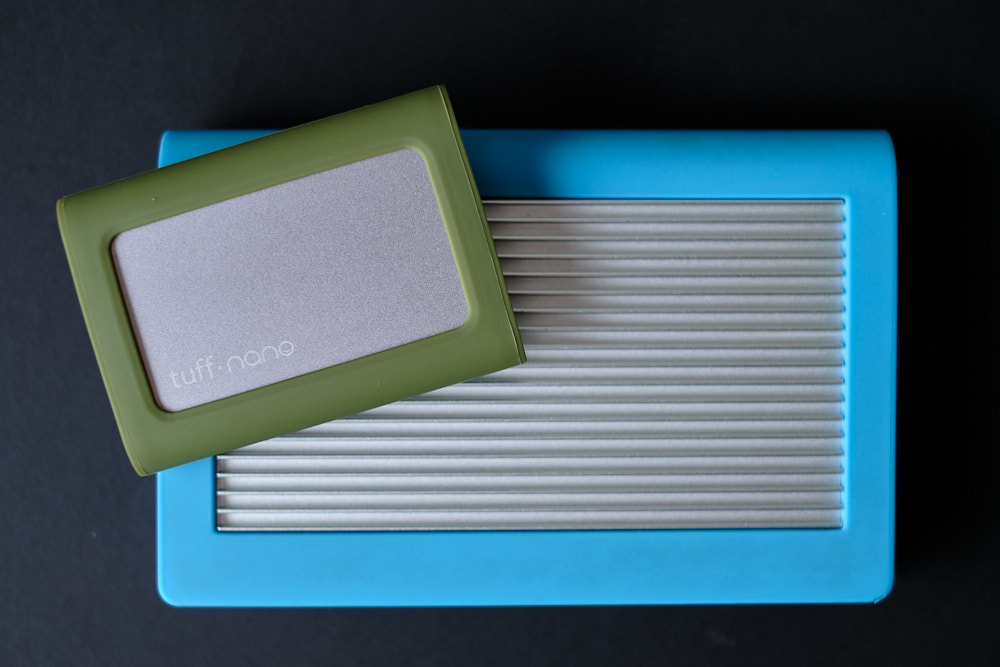 The tuff nano with the original TUFF SSD.

In my review of the Tuff SSD, the only thing I mentioned that I really didn’t like was its physical size and weight. The Nano completely addresses both of these and then takes the underlying technology a step further.

Let’s start with the specs. The Tuff Nano takes the world’s desire for smaller, lighter, faster, and more durable devices and packs in every last screed of tech for an external drive. The core of the Nano is an NVMe SSD in either 500 GB or 1 TB (coming in 2020). It is fully compliant with the USB 3.2 Gen 2 SuperSpeed standard, meaning that the port will never be your bottleneck to speed, and future compatibility with the upcoming USB 4 standard is also in lace. With that combination, Caldigit boasts read speeds of up to 1,055 MB/s and write speeds of up 900 MB/s. 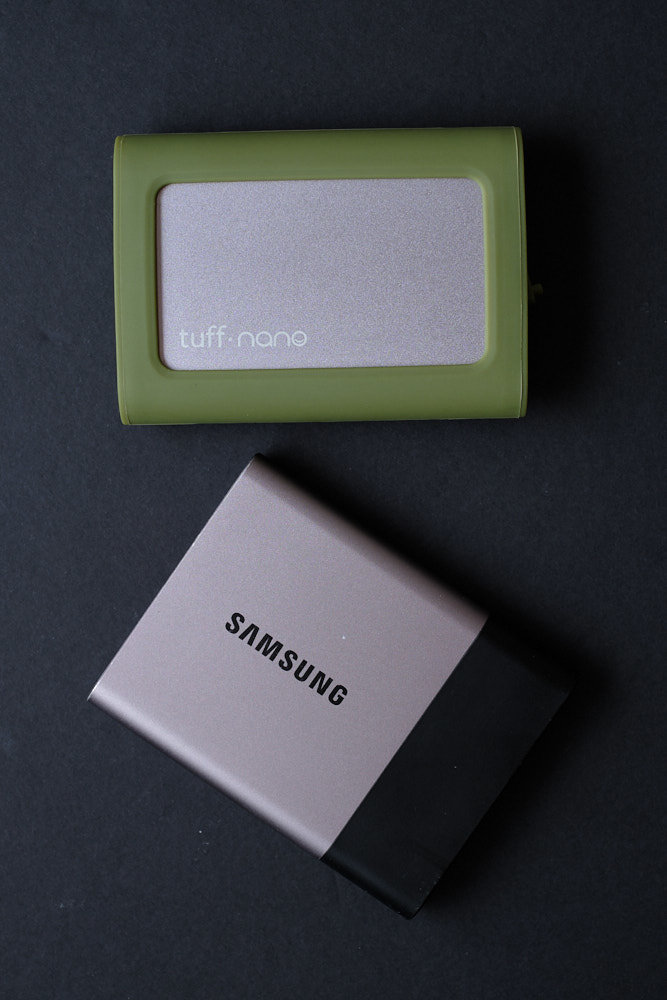 Physically, it is 7.59 x 5.44 x 1.45 cm and weighs 74 grams. This puts it right in the same league as Samsung’s T series, Sandisk’s Extreme SSDs, and other tiny tech. The Nano also takes durability another step further and passes the IP67 rating, meaning that dust and water won’t be an issue around this drive. 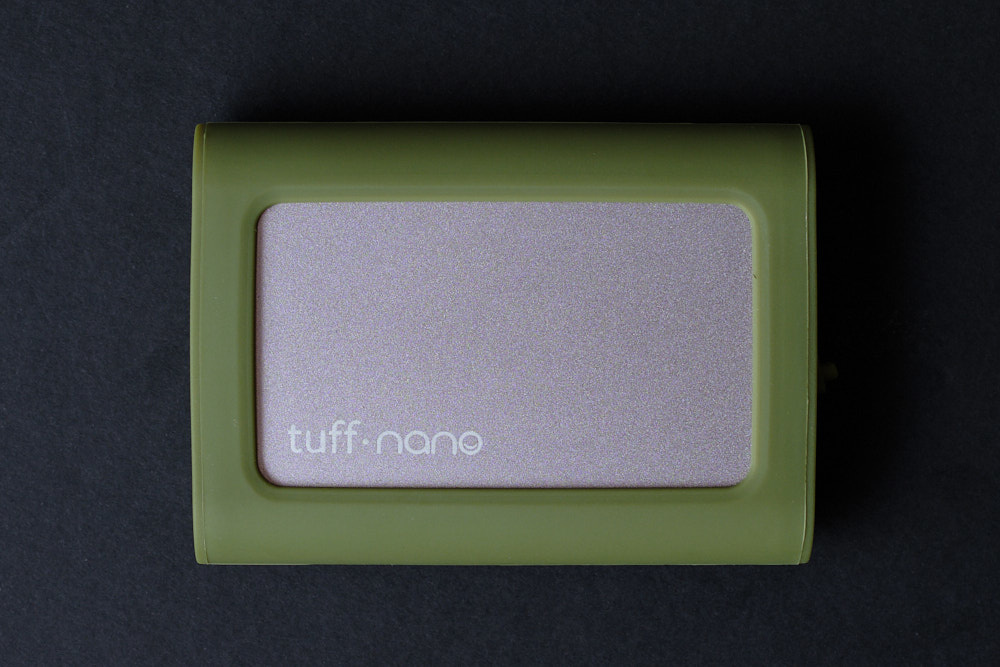 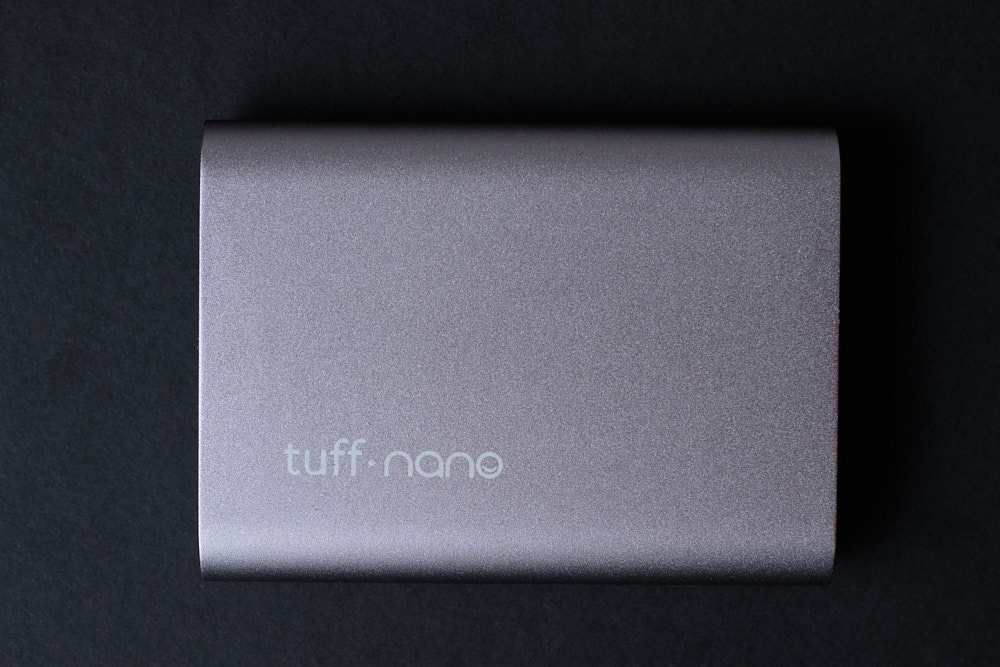 Before we jump into my tested numbers, it’s important to note a few things. While the NVMe SSD and USB Type-C 3.2 Gen 2 port are capable of astronomical speeds, you won’t necessarily ever see them in real use. In order to reach these theoretical speeds, every link in the chain needs to meet the performance of this device. You’ll need a fast drive to transfer from or to (your old USB thumb drive won’t magically send data to the Nano as quickly as it can devour it), a USB Type C Gen 2 port to connect it to, and a software environment where the host computer has the ability to push that much data around so quickly.

My test machine was a couple of generations old Dell XPS 13 9360. While it, on paper at least, has all the technology required to push the Tuff to its limits, I’m always a little skeptical of Dell’s final implementation of technologies. They always seem to fall a little short. In order to maximize my chances of everything going well, I made sure all my drivers were up to date and gave the machine a good 15 minutes after a fresh boot to ensure all background tasks were complete before beginning my tests.

I performed two sets of testing: one theoretical (synthetic testing with CrystalDiskMark) and one real-world (20 GB single file to simulate a large video transfer). With the first tests, I was expecting to see close to the peak advertised performance, and with the second tests, I was expecting things to be a little slower, as other factors would be affecting the actual transfer.

First, we’ll take a look at the CrystalDiskMark results. As you can see, Crystal reports transfers just shy of Caldigit’s claims in peak mode. Once switched to “Real World” mode, CrystalDiskMark gives numbers more in line with what I might expect from a computer that’s performing other tasks. Still extremely respectable from a bus-powered external drive! 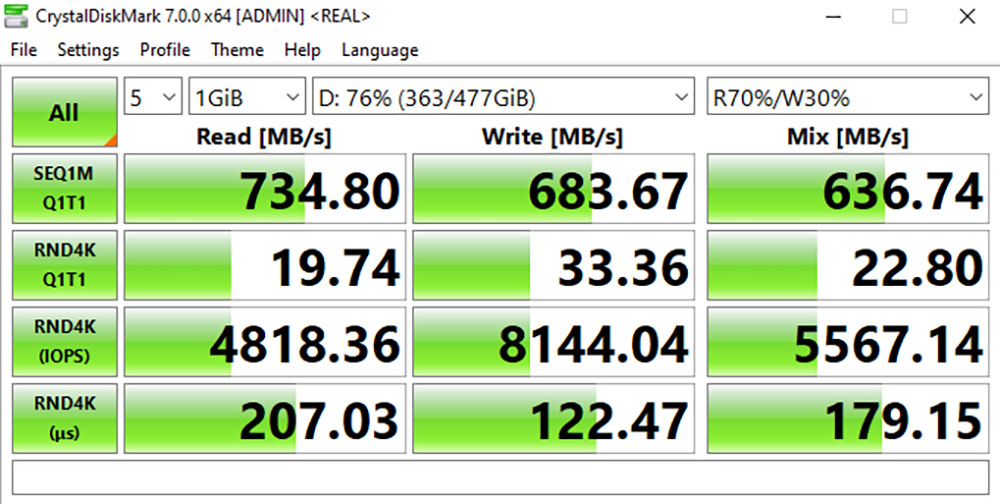 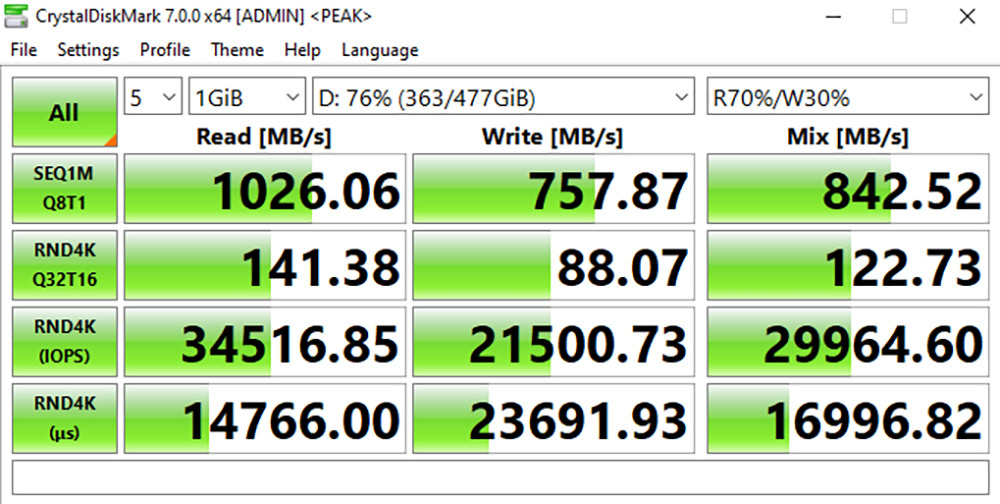 For my real-world performance tests, I created a zip file 20 GB in size and copied it back and forth several times in order to see how the drive might react to buffering large files over and over again. Even after 10 sequential transfers, I didn’t see any significant changes in transfer speed. This suggests that in any normal circumstance (200 GB+ of transfer) you won’t see the drive slow down as the controller cleans up after itself.

With my Dell, I saw really great speeds when transferring to the Tuff Nano. Speeds were sustained at between 560 and 620 MB/s each and every time I made the transfer. To put that in perspective, 20 GB transferred in just 32 seconds on my fastest test.

The issue that I ran into with my testing was with transferring from the drive to my internal NVMe on the Dell. I was never able to get my read speeds above 250 MB/s, and the transfer rates were extremely erratic. I decided to give this a try by transferring from the Tuff Nano to other USB-attached drives to ensure it wasn't my internal drive causing the issue. Sure enough, the Sandisk Extreme SSD and Samsung T3 took in data at a consistent 300 MB/s, and the original Tuff SSD was a fraction faster than that. 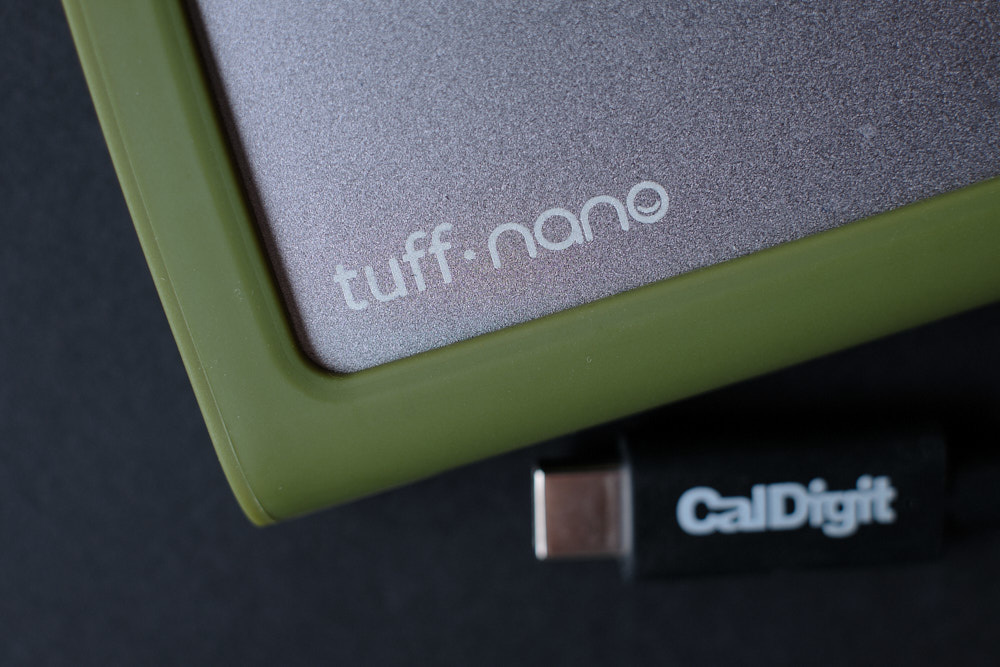 With these test results on an older machine, we can only assume that a 2019 machine would reach much closer to the advertised speeds from Caldigit. Either way, I’m impressed, and this is my new day-to-day drive for location work. Since it’s IP67 certified, it will also be joining me in the mountains of northern Myanmar in February!

If you’re looking to purchase a drive that will hold up to our increasing file size and speed requirements for a couple of extra years, the Tuff Nano is certainly a good option. For the location work that I do, the IP67 rating and overall ruggedness of this drive make it the perfect option for me. At just $129.95 for the 500GB unit, the Tuff Nano is priced just above its competitors in the small portable SSD market, but currently packs a lot more tech in for your dollar. You can pick yours up here.

It would be nice to shoulder a lighter load on the rare occasion I get to go on a long photo vacation overseas. Thanks for the heads up on gear options. :)

I like Caldigit support but will definitely stay away from their glitchy equipment in the future.

I purchased their thunderbolt docks and the thunderbolt station had a lot of glitches copying data to my external drive. Twenty emails later I gave up with issue unsolved.

The card reader on the Caldigit Ts3+ I bought this year would not work unless I turned off the computer and reset NVRAM and SMC EVERYTIME I WANT TO USE THE CARD READER to ingest images. Another set of emails and nothing solved.

I now have to plug in USB-C external card reader to use a feature that swayed me to get this over another brand.

Interesting that you're having issues with this. I haven't had any issues like this with my TS3+ at all. Were you offered a replacement unit?

I will be asking for a replacement as it is under warranty. You can look at the instructions to the TS3+ and it states that is the procedure if the SD slot does not work. it is a documented issue. except in my case it happens all the time. even if i do the NVRAM/SMC and reboot it seems to sleep after a while and I have to reboot the computer and perform NVRAM/SMC again. I am on Mojave and have no issues on 2019 Macbook Pro 13". Will stick to Sandisk for storage.

Hello Yin Ze, we are CalDigit Asia. We feel sorry to hear about the inconvenience of the use on our product. We would like to provide support for this issue through: asia@caldigit.com.. If you have any question or suggestion, please feel free to contact us. Thank you.

I had issues with my first unit of the TS3+ where 3 ports where not working properly.
My now 2nd unit regularly crashes my Macbook Pro (2016) and I am in contact with the European support. I will switch it in January hopefully.
Otherwise I think it is the best dock out there. But unfortunately I have no luck with their units.

Caldigit is good when it works but the high prices seemingly do not translate to good QA on their products. Way too many glitches. How does a TS3+ with three crappy ports pass inspection? So glad I did not buy their RAID units.