Whenever Paul C. Buff, Inc. releases a new product, the industry always pays immediate attention. After all, Buff gear is beloved far and wide for being, hands down, the best "bang for buck" lighting option in studio strobes for photographers, myself included.

That's not to say that Buff equipment is bargain barrel level (not even close), as the resilient and affordable AlienBees and more recently, DigiBees, have been seen for years outfitting an endless list of studios in every state of the U.S., not to mention countless photographers' gear cases. Easy to use, quick to set up, and never overpriced, Buff strobes and accessories are usually the answer to the question, "What strobes should I buy?" when I get asked at my workshops, especially since the introduction of their Einstein.

Enter the Paul C. Buff, Inc. CyberSense. No, not a new strobe, but a wireless control unit for the entire line of Buff strobes and trigger systems. While existing users may be aware of the famed Cyber Commander unit, the company's flagship wireless remote and the CyberSync Transmitter, Buff's straightforward trigger, it should should be stated upfront that the new CyberSense is neither.

So What Is It?

Sized to match your average smartphone, the CyberSense is a wireless controller for up to 4 Buff strobes (16 frequencies to choose from) with a simplified interface for super quick governing of your strobe and modeling lamp output in a comfortably shaped device. I admit freely I was a touch skeptical about the size of the device when I first learned of it. After a few minutes of actively using it recently in St. Augustine, Florida, however, I realized how satisfying it was. No tiny dials or impossibly microscopic buttons to try to navigate and overall dimensions I am, of course, very accustomed to as a longtime smartphone user. 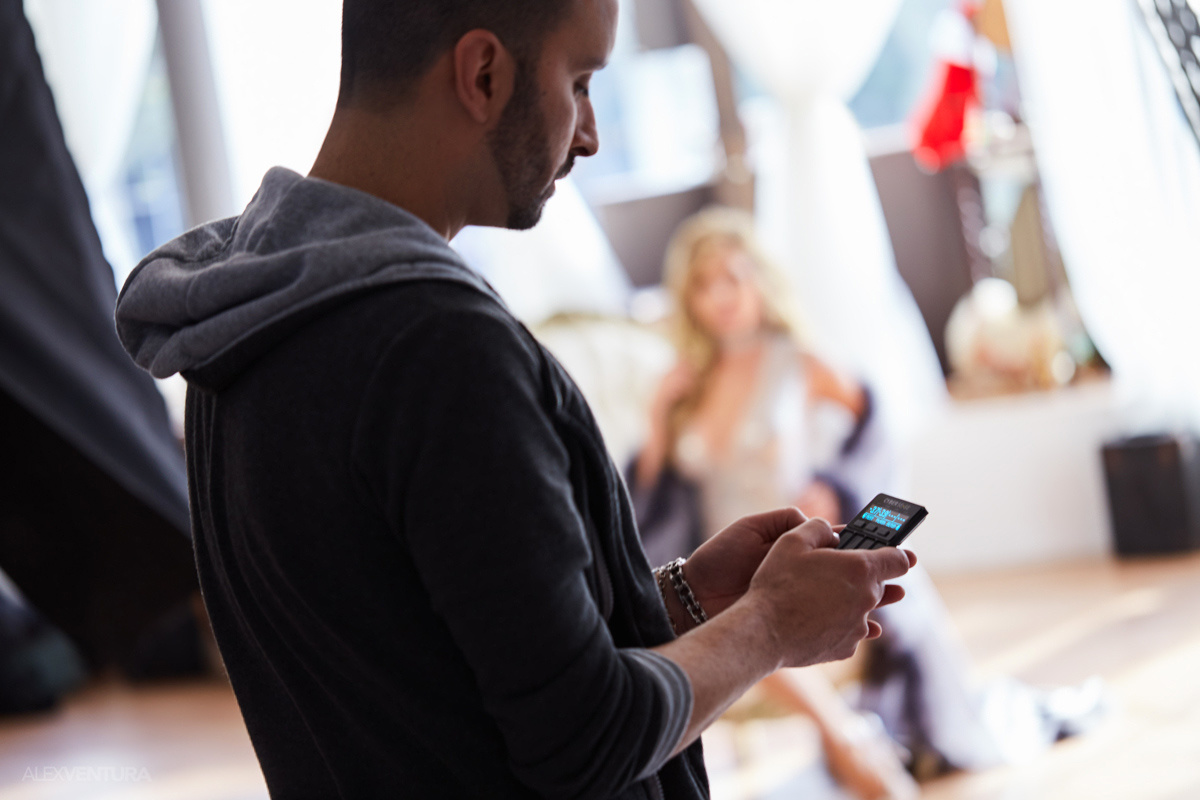 Sized to match a smartphone, the feel, shape, and interface are similar enough that I settled in quickly.

Initial inspection of the CyberSense finds a digital display, three rectangular buttons and four touch sliders. While I couldn't get my DigiBees connected to the CyberSense by my tried-and-true method known as "push random buttons until it works," a 15-second peek into the instruction manual got me up and running smoothly. The touch sliders work similar to a smartphone touchscreen, wherein a light touch and slide is all that is required to adjust strobe and modeling lamp output either up or down on the fly. 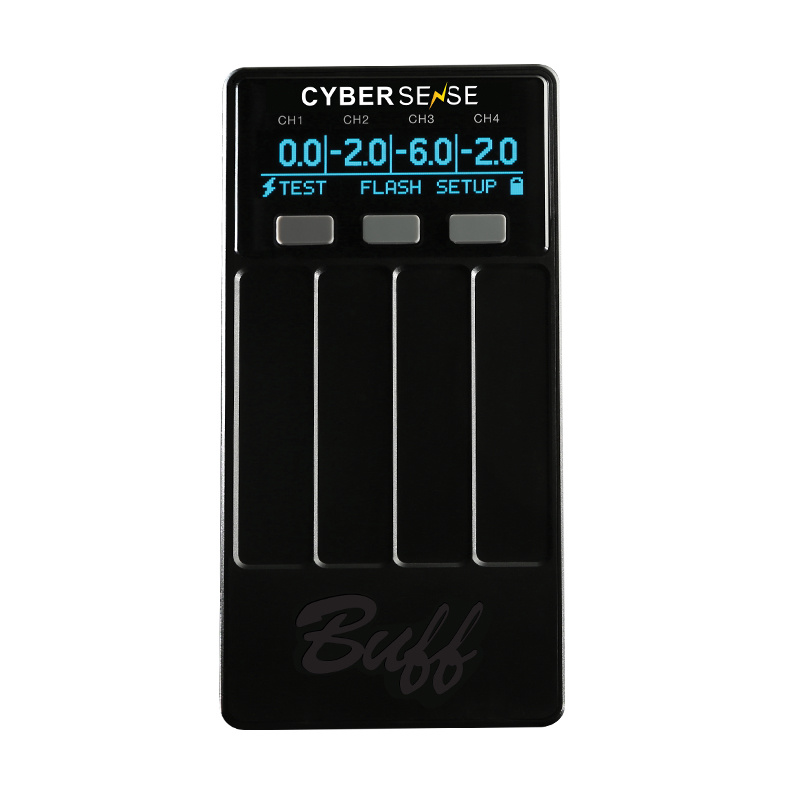 Once wirelessly connected to your Buff strobes, the CyberSense does not forget said connections until you intentionally override them. That is to say you can turn your strobes off, let the CyberSense go to sleep mode, and change everything around on set without having to reconnect it. I discovered this simply by chance after doing exactly that, changing my setup in the studio and then firing up the strobes again. The CyberSense unit kept working smoothly as if nothing had been unplugged, something I found of huge importance when I am working quickly. 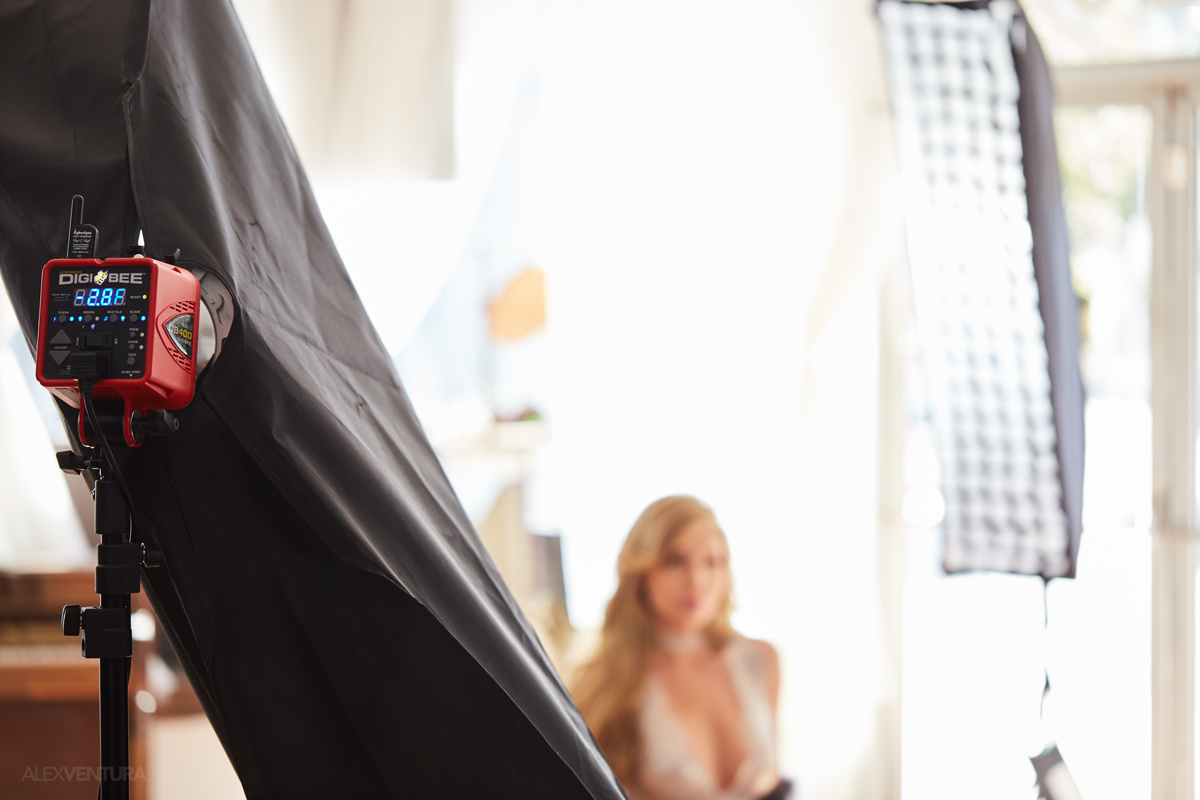 Connecting up the CyberSense to the two DigiBees I had on set was as simple as ever, and once synced, the connection did not need to be synced again even if I unplugged the strobes for a minute.

What Could Be Better:

As is their usual, the company engineered the CyberSense to be very cost-effective without being junky, and the $79.99 price tag clearly reflects that initiative. The device has a great tactile feel without being heavy and simply works. There is no need for a complicated, overly analytical review on the CyberSense in my mind, because it works quickly, easily, and smoothly and does exactly as it's advertised.

Full disclosure: while the company did send me a CyberSense unit to keep, I am happy to report that its performance in Florida has convinced me that it is now a permanent part of my gear list.

Buff themselves have a very useful 4 minute video on how to set up and use the CyberSense, so I'll let them take you through it:

The CyberSense controller can be purchased on Paul C. Buff, Inc's website.

I'm a big fan of AB/PCB, but I don't get this product.

This capability should be in the transmitter itself, and it's just one more accessory to keep track of.

I switched to Flashpoint/Godox specifically because PCB's wireless functions are so limited.

My Flashpoint R2 transmitter was just $46, and it can remotely control flash power, plus it's TTL/HSS capable.

And more importantly, the receivers are integrated into the flashes.

My thought exactly. I have two Einsteins and two White Lighting and the reality is that they almost never worked since I got my Godox. Now that I have two AD200's my Paul C Buff strobes never get to work.

I love the Einsteins, they work and very reliable. However, the lights plus cables, receivers, triggers (always have a backup) and heavy batteries become too much to carry and to setup. Two AD200's and couple of triggers and off I go.

I am really surprise that They did not go forward with a strobe that has integrated battery and receivers.

You say that they are affordable but a $500 strobe, $250 battery and around $150 for radio setup comes to the same price as a TTL ( and HSS) Godox. And the Godox is so much easier to setup.

I am keeping my Einsteins because in light of the Godox system I will not get much for them. Since they are great lights after all I will use them in my new tiny basement studio.

Ohh cool, I really like the way it looks

Let's just call it what it really is, a cheaper, yet severely hobbled version of its big brother, the Cyber Commander. This lets you control power to 4 lights- that's it.

For $100 more, the Cyber Commander lets you control up to 16 lights, set groups, has a built in light meter, has a 100' more range, and more importantly- can hold settings for up to 50 different lighting combinations, which can be called up at any time. For certain lighting looks i do, it's a matter of calling up the bank number of that look, and boom, power is set for all the strobes in according to my settings, all in one click of the button. Plus, it can be used off camera as a remote trigger for using it with a light meter (i use a sekonic over the built in one). And because it's mounted to the hot shoe, no lanyard needed. ;) The push button joysticks makes it super quick to select what you need, as well.

I will say, the design of the Commander is poorly built and the hot shoe and/or joystick usually breaks after a year of use (and that's studio use), but it still manages to work like a trooper.

Nino, do you own or ever used a Cyber Commander? If you do, i find it very hard to believe you'd ever use something as useless as this thing, let alone recommend it.

Everyone has different requirements, aesthetic preferences, and even technical comfort level. The Cyber Commander is a fantastic tool, and I love mine very much. But it is also fairly technical to set up – especially if you're even a little technophobic (or just old skool).

I also never use it on the hotshoe cuz it gets in my way (I slap a CyberSync on the camera, since it weighs basically nothing; and I use the Cyber Commander in hand, pocket or lanyard). This is all just personal preference, of course.

The CyberSense works just as well as the Cyber Commander in basic arrangements, but is easier to set up. That's the first thing I noticed. It's less than half the price of the Cyber Commander, and were I to recommend a controller to someone who didn't need 5+ lights, and wasn't into getting too technical, I would recommend the Sense over the Commander immediately.

CyberSync, CyberSense and Cyber Commander have varying uses and customers, as with most things.

True story: I used Einsteins and Alienbees for 4-5 years before I moved to Phottix and now to Profoto B1s. The best thing about the Cyber Commander was that the signal always worked. I broke the plastic gear part that kept it upright on it's own, but fixed that with double sided tape. Every year or so, I would have an issue where I lost my settings cause of user error or some other glitch. Instead of trying to find the manual, I would just call Paul C Buff tech support and in 60 seconds a really friendly and knowledgeable tech would walk me through the programming every single time.

Was just in Nashville for CMAFest and stopped into Paul Buff to say hey and picked up one of the CyberSenses. So far it's been a lot easier to set-up and understand, but I'm with Nino, I would like to control more than 4 strobes. This is essentially the digital/wireless version of the original RC-1 for those long time Buff shooters that had on of those mounted on your studio wall with telephone cords running from it to each one of your Buff Ultras. I continue to push them to incorporate their trigger systems into the head with a setting to turn it on or off. The Cyber Triggers are a weak link and delicate accessory that has to be maintained and managed. Seems like it would be just as easy to incorporate it into every Einstein and DigiBee. My only complaint so with the CyberSense that it cuts itself on with a simple touch, so a flip phone version would be nice. I'm also looking for some type of a phone case to put it in so when I pack it in my Pelican case with lights it doesn't get smashed on something. #GetBuff