Lens mount adapters are available in huge numbers for mirrorless cameras thanks to the reduced flange distance they offer. Nearly all Full Frame and Medium Format mounts have been adapted to the Fujifilm GFX series of cameras now, and today we'll take a look at the middle-of-the-pack Fotodiox Pro Nik(G)-GFX Lens Mount Adapter and discuss what it is and what it isn't to see if it would fit the bill for you.

The Fotodiox Pro Nik(G)-GFX Lens Mount Adapter is a simple mount to mount converter with no optical elements to enlarge the image circle. Thus, for many lenses, there will be a significant vignette as they were designed with smaller sensors in mind. If vignetting and the increased field of view are things that bother you, you may want to look into the Laowa Magic Format Converter. This is an adapter with optical elements to expand the 35mm image circle to fit the larger sensor. That being said, let's jump right in and take a look at the Fotodiox adapter.

It might seem like a simple thing to make a high-quality piece of machined metal, but so many times manufacturers get the small details wrong and make what could be a premium product feel rather cheap. The Fotodiox Nikon-GFX mount adapter straddles the line between premium and cheap in terms of build quality while still doing a good job of what it says on the box.

The mounts are both made of chrome-plated brass and feel like they will stand the test of time. They both mount snugly to their respective targets, with the Nikon side feeling like it mounts a little looser than the Fujifilm side. In fact, the Fujifilm side feels a little too tight at times. Otherwise, the materials all feel good in the hand and everything mounts flush, so that’s a point for the premium side. 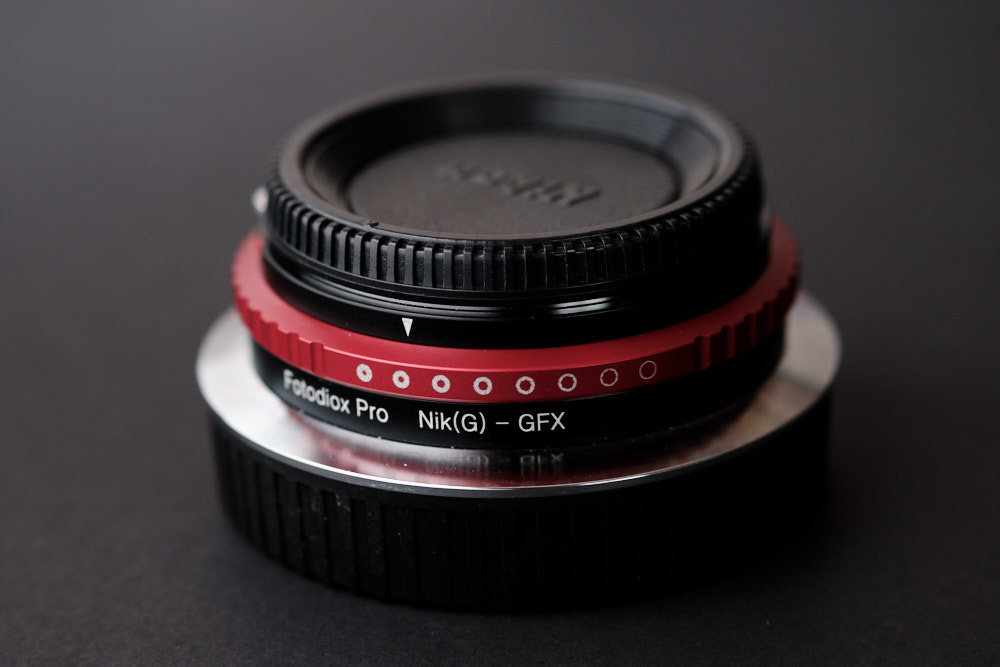 One thing that I’ve noticed with a few different adapters I’ve used is how poorly the lens release clip is made. Fotodiox is getting another point here for the tab they designed to release the Nikon lenses from the adapter. It feels good and is easy to press. It can be pressed from various angles and doesn't require any jiggling to get it to move.

The aperture ring turns smoothly and has markings to show whether you’re opening or closing the aperture (bonus marks there!). With lenses that have an aperture ring, this can also be used to fully open the aperture for focusing and then stop it back down to a predetermined value, which makes it extremely useful with lenses that have aperture rings like the old AI lenses or the D type lenses. Nikon’s G-Type lenses, of course, will not allow this and you’ll simply have to guess your exact aperture. This design is another point in Fotodiox’s favor, but only just. I'd love to see markings to approximate aperture values on the G-Type lenses. 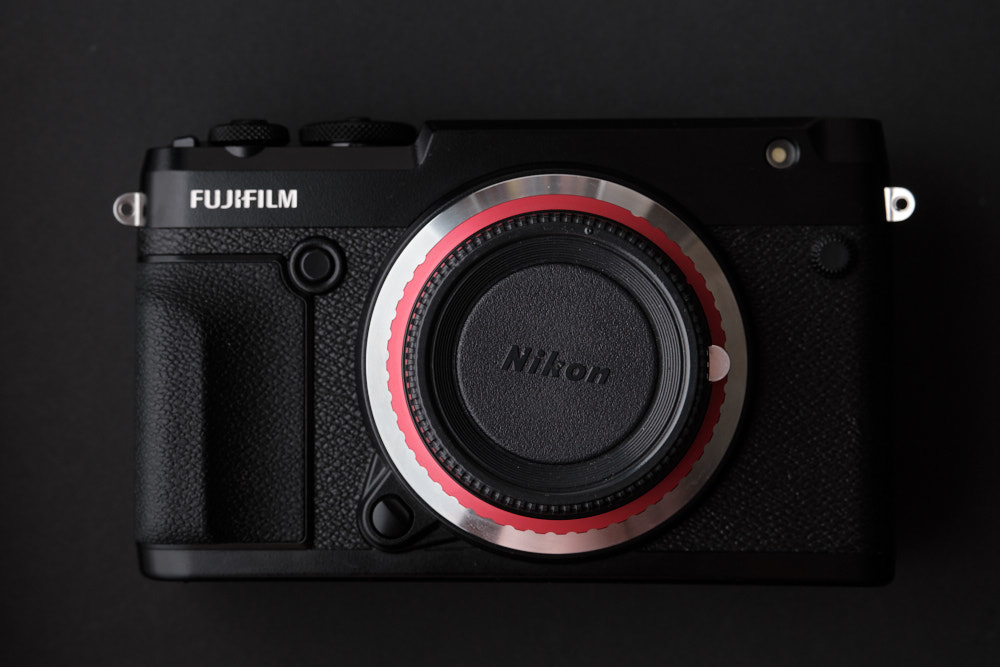 Let’s talk about the color choices and overall design, though. This might almost take away all their premium points. The aperture ring is an obnoxious red and the Fujifilm mount is a chrome-plated eyesore. With all the effort that went in to making well-built adapter, a little time could have been spent making sure it looked like the well-built tool it is. A tapered black edge to cover the chrome mount and a dark gray or black aperture ring would complete this package and make it feel so much nicer.

Of course, having some gaskets to prevent dust and water entering both mounts would also improve the overall quality of this adapter. One thing that worries me every time I use it is that the slightest change in weather might mean I need to pack up the gear and head in.

Overall, the Fotodiox adapter does what it says on the box. Nikon lenses mount and are useable (even G-Type) and focus to infinity is possible on all the lenses I tested. There are a couple of things that make it slightly difficult to use, one of which could be improved by Fotodiox and the other is dependent on lens choice.

Firstly, the aperture ring. Since this is designed to support all lenses with all aperture values, it does not have a stopping point for F/4, for example. So, if you’re using an f/4 lens and you twist the aperture ring on the adapter towards the open end, you will feel some resistance from the aperture index tab on the lens itself when you reach the maximum aperture of your lens. I’m afraid each time I open this ring that I’ll cause damage to the Nikon lens and have become very cautious with opening it. 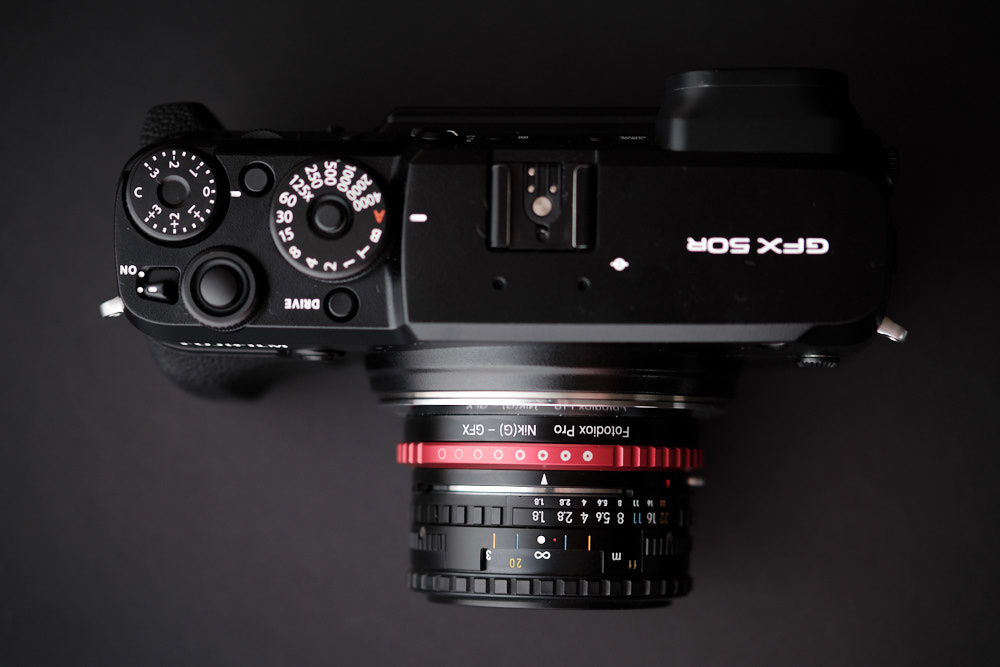 The second issue I have is when using certain Nikkor lenses. Some lenses have been better designed with the manual-focus user in mind and thus are much easier to use on this adapter. However, some lenses, especially those with short focus throws, can be extremely difficult to focus. Older lenses are generally better for this as their focus throws were designed for old film bodies without autofocus.

Since this is simply a mount adapter, not all lenses are going to cover the full image circle required for the larger sensor in the GFX. I’ve found that so-called “normal” lenses and short-telephoto lenses like the 85mm f/1.4D cover the image-circle quite well. However, the wider lenses I’ve tested show much more vignetting. If you want to just use the area that the lenses were designed for, you can always switch the GFX cameras into 35mm Format Mode. However, that’s not where the real fun lies.

This adapter doesn’t contain any optical elements, so the effective field of view you’ll get from lenses mounted on a GFX body is wider than you would be used to when mounting them on a Nikon body. Putting on the 50mm f/1.8, a lens I’m quite familiar with, was a bit of a shock the first time as I was seeing so much more at the same subject distances. With a little practice, though, it’s easy to get used to. 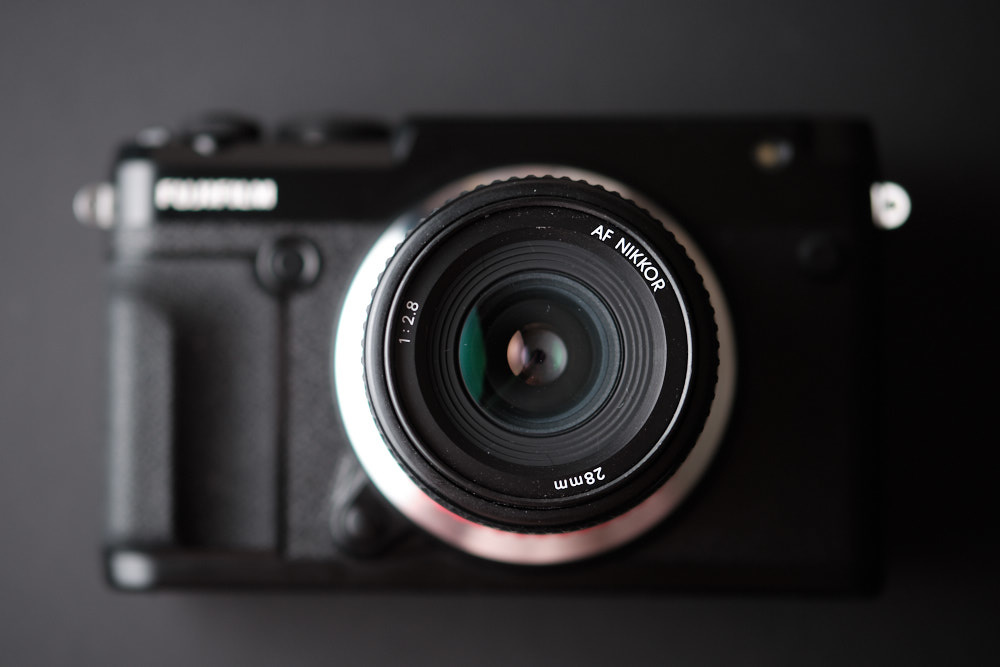 I’ve included some sample images from the Nikkor AF-D 28mm f/2.8 and Nikkor-E 50mm f/1.8 to give you an idea of what each of these lenses produces. Of course, these are not really a reflection of what the adapter is doing, but we needed some samples that aren’t just pictures of the adapter itself.

The first shows how wide the 28mm lens renders an image on the GFX sensor. This is stopped down to f/11, so you can also see that the vignette is quite hard-edged at this aperture. At wider apertures, it is softer and less pronounced. 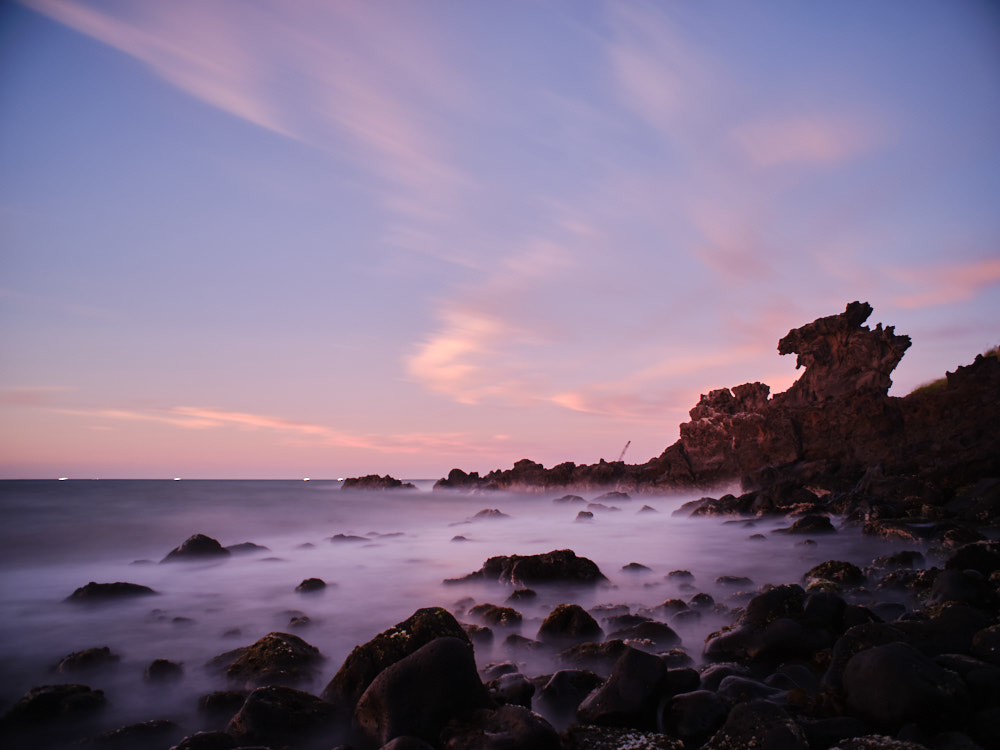 In this second shot, we see the sharpness and extremely narrow depth of field produced by the Nikon Series E 50mm f/1.8. You can also see the vignette produced by this lens here as well. This is easily correctable in post-production if you want to remove it. 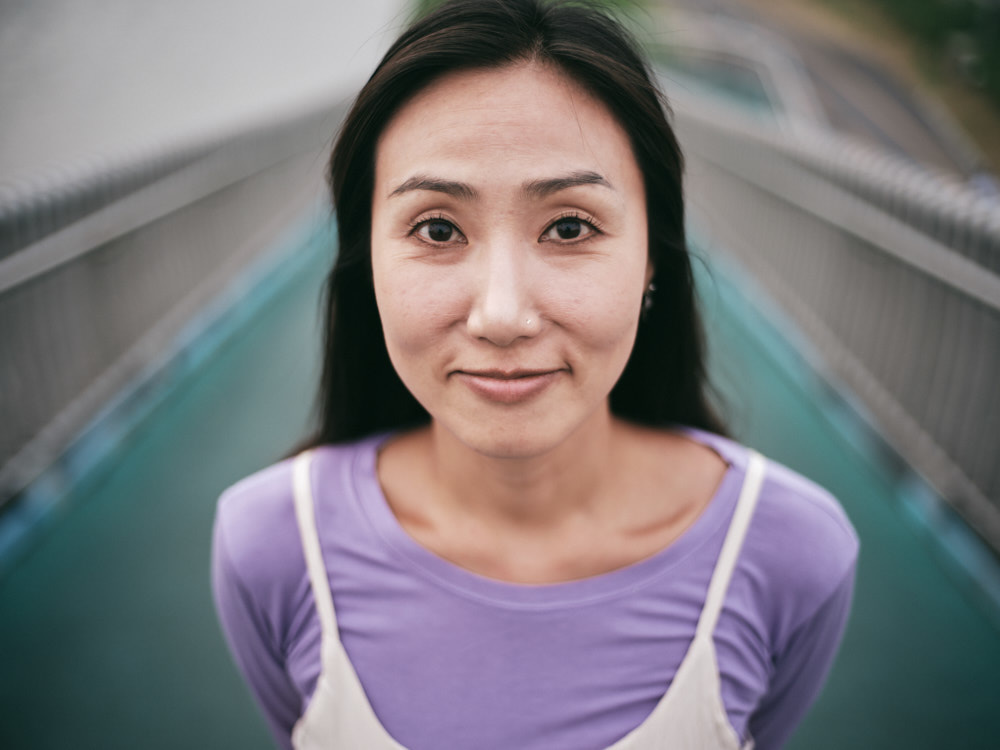 Finally, a shot of a sign on my evening walk to show the separation possible with even a 50mm f/1.8 lens when coupled with the larger sensor. Personally, I love the out-of-focus rendering of the cheap E-series lenses, but it's not for everyone, to be sure! 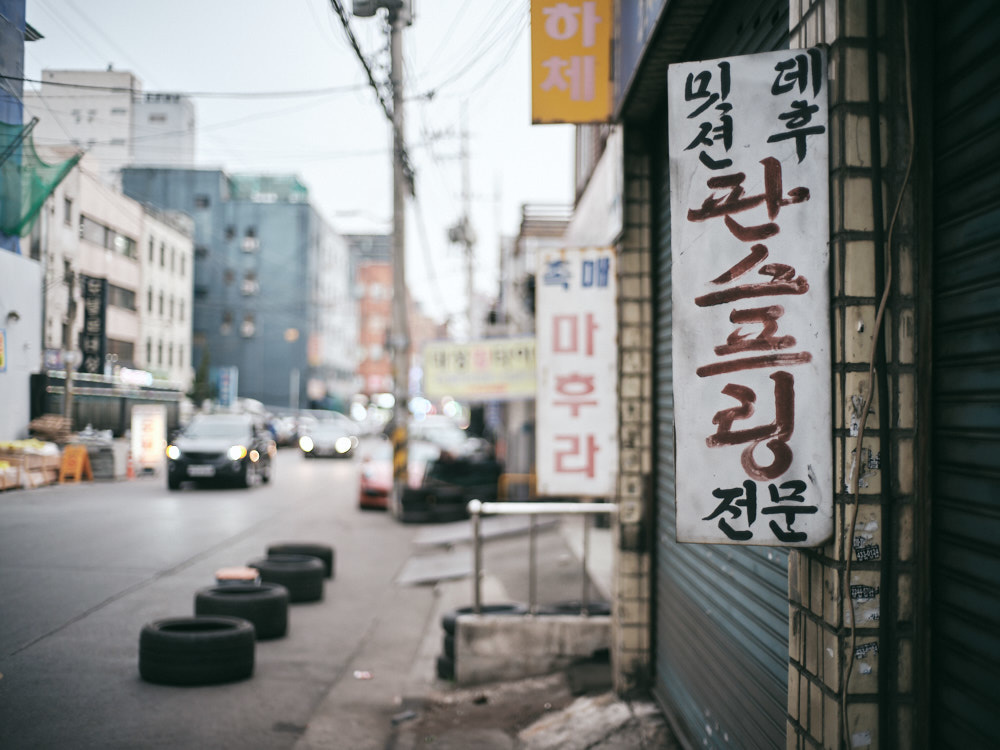 Overall, the Fotodiox Pro Nikon-Fujifilm GFX adapter does the job it sets out to do. It may not do it completely in style, but it is well built and serves its purpose. If the red and chrome don’t matter to you, this could be a tool worth picking up. There are other options out there, some cheaper and some more expensive. A great selection of these is available here. If you’re looking to pick up the Fotodiox adaptor, you can do so here.

You've done an excellent job of understanding the core concept of this review.

I have. This is a waste of time, money, and resourses.

Unless of course your aim was to work with the way a lens designed for a 35mm sensor renders on a larger sensor. Then all of those would be well spent.

That's quite an expensive hobby then.

I'm kind of confused, does the adapter have a diaphragm built into it, or does it adjust the diaphragm of the lens? I have some adapters for F to E, but I'm using full manual old lenses with no AF and manual F stops.

It adjusts the existing diaphragm to keep the characteristics of the original lens. :)

Makes sense! I guess I was confused because I've seen some have variable ND filters and other features.

Sorry it wasn't clear. This is the basic of the basic. It simply adapts the mounts. There are no optical elements or such.