Does this full frame camera in compact form live up to the expectations?

Just a few weeks after the announcement of Sony’s most awaited video-centric camera, the Sony a7S III, the brand announced what could be one of their most unexpected releases of the year. Rumors and leaks aside, this camera basically overtook the models that most Sony users, followers, and fans were expecting, like the successors to the Sony a7 III or even to the Sony a9 II.

The Sony a7C was announced to be a “new concept,” and it definitely came in a form that no one was expecting it to be in. To put things simply, they put a full frame Sony Alpha sensor in the body of their reputable APS-C line. It is just about 4 millimeters longer and taller than the Sony A6500. But of course, this new compact full frame camera comes with more than just a more portable body.

The Sony a7C comes in just 124x71 mm and just 509 grams with a body made mainly of magnesium alloy that is said to improve moisture- and dust-resistance. It features a button and dial arrangement that is almost identical to the Sony A6000 and its successors. This compact full frame camera comes with a slightly thicker hand grip on the right that allows a better grasp of the camera, improving handling for one-handed shooting and filming. 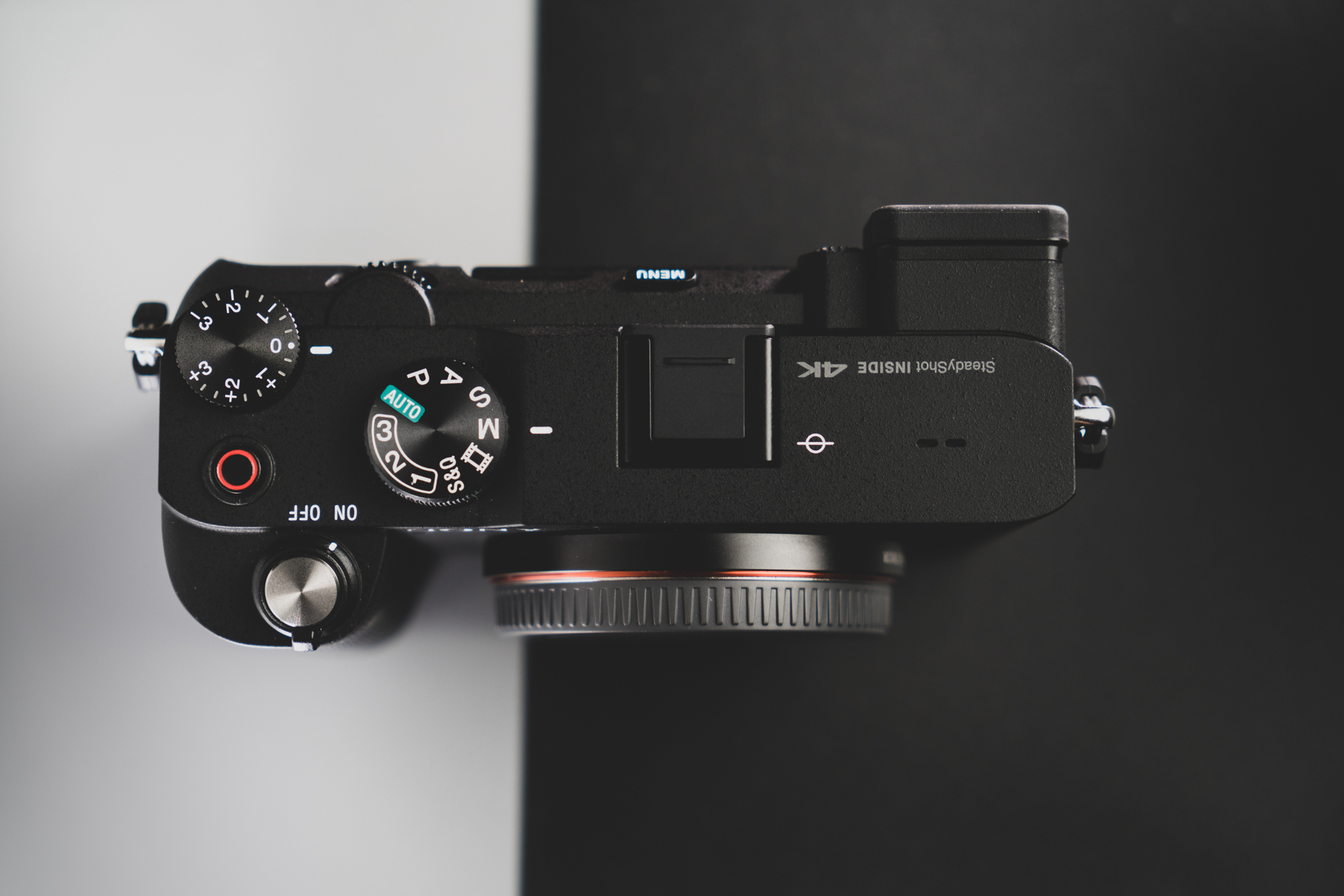 The a7C still comes with a 0.9-inch XGA OLED electronic viewfinder with 2,360,000 dots, which is very similar to what can be found on the APS-C lines. Of course, one of the main attractions of this new camera comes in the form of the 921K dot 3.0-inch side-opening vari-angle touch panel monitor, similar in form to what can be found in the Sony a7S III. This feature potentially improves ergonomics in shooting from unusually high or low angles as well as shooting from the sides without losing sight of the screen for precise still image and movie captures. Of course, at this day and age, it’s important to mention that this screen would do well with on-the-go vloggers filming themselves while walking around. 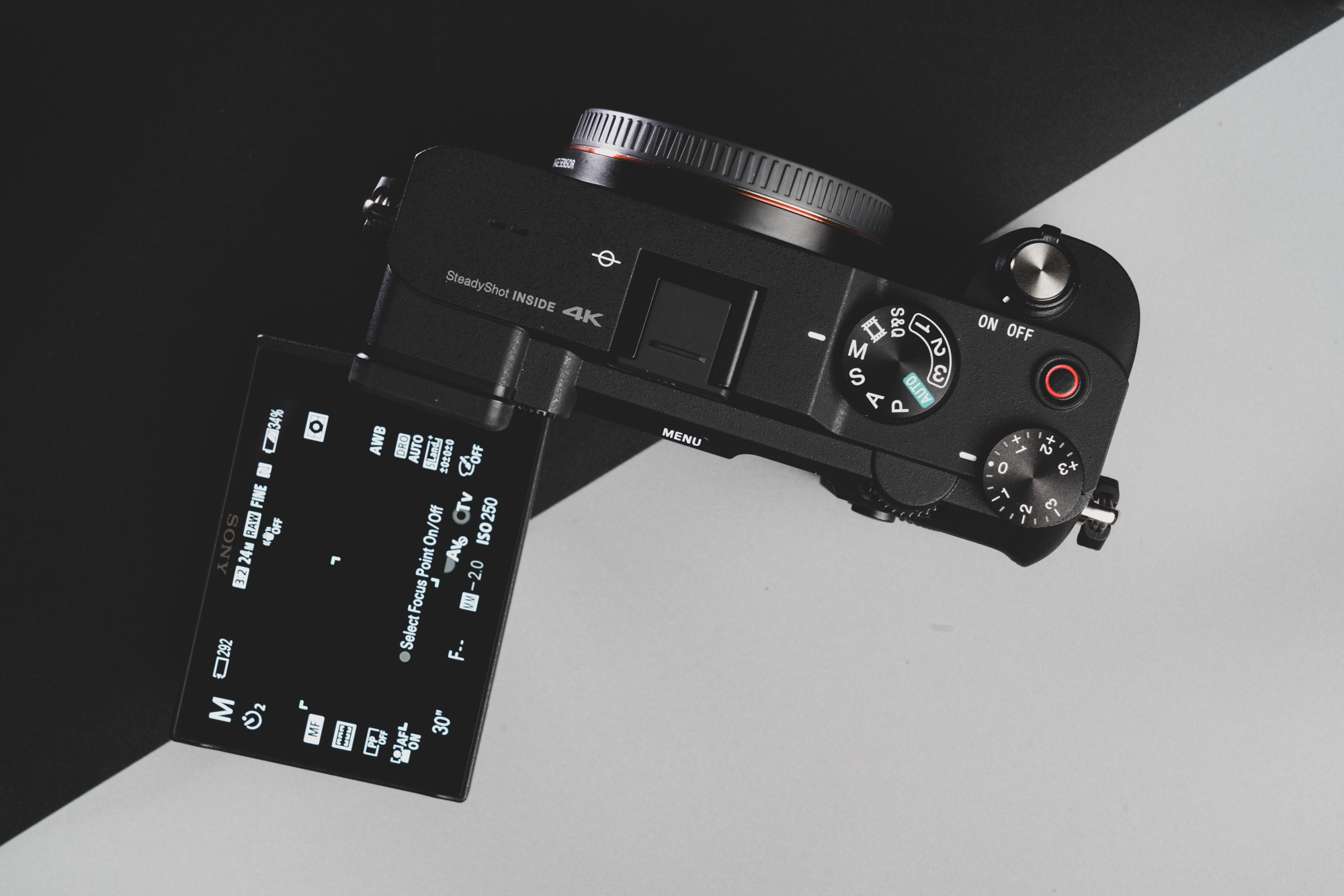 Though this was announced after the a7S III, it sadly does not feature the new, improved, and more organized Sony menu system. It would have improved even more the ergonomics of this camera for on-the-go controls, but given the combinations found in this camera, it doesn’t seem like the menu will be updated to it either. 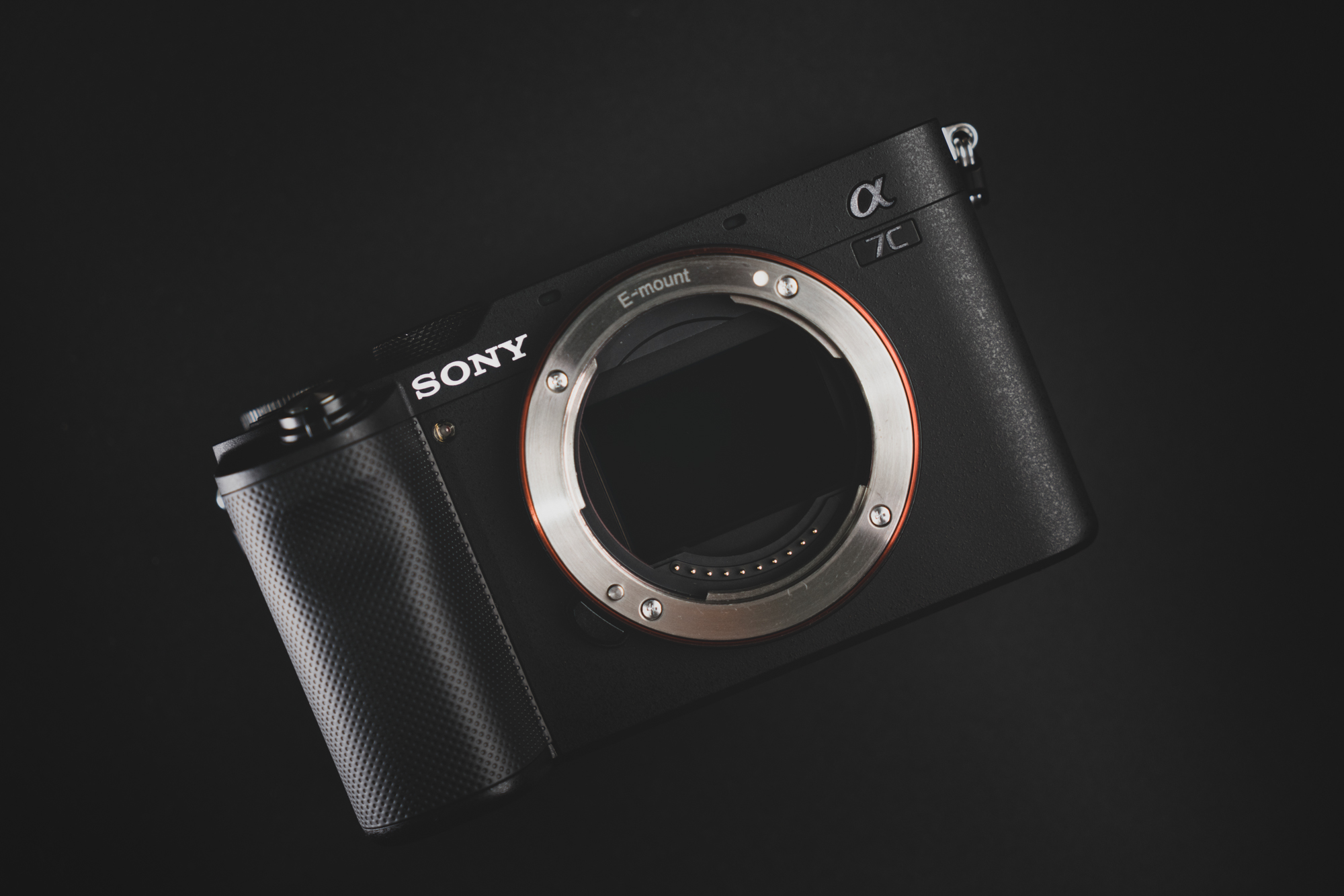 The Sony a7C comes with a 24.2-megapixel backside-illuminated Exmor R sensor, the same sensor that can be found in the well-loved Sony a7 III. It features a Bionz X processor enabling a range of 15 stops of light and superb color reproduction, encoding everything into a 14-bit raw file for flexible raw processing and detail maximization. This combination is also able to produce 4K videos at 30 fps and Full HD videos at up to 120 fps with the option of the S&Q mode at the same rate. 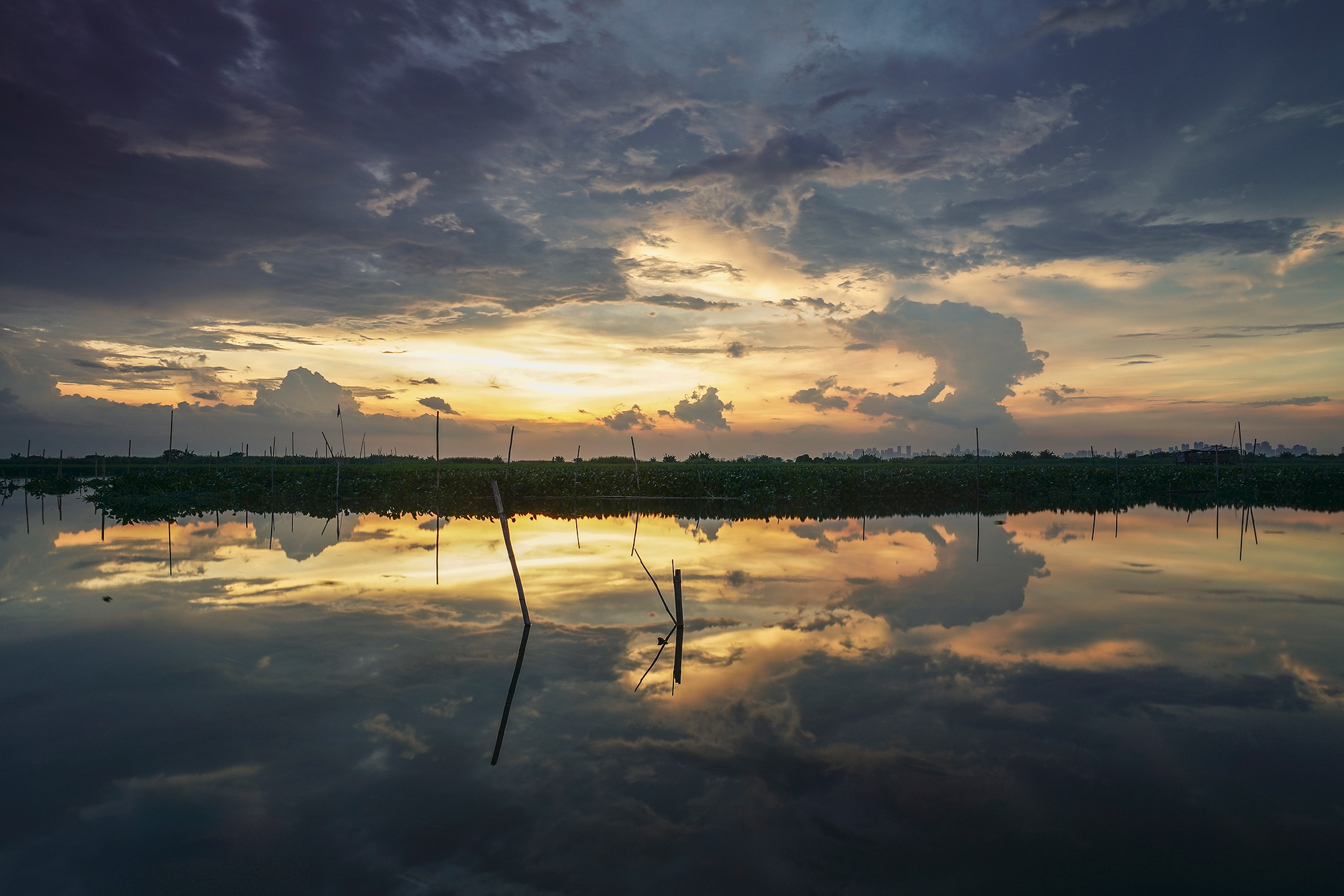 This combination, also found in the Sony a7 III, has proven to be a good hybrid camera for both indoor and outdoor shooting. With a light sensitivity of ISO 100 to 51,200 extendable to ISO 50 to 204,800, this camera is quite capable in adapting to various lighting conditions.

It can shoot up to 10 frames per second with both mechanical and electronic shutter while keeping up with continuous AF and AE tracking, which is very capable of fast-paced shooting for travel and outdoor adventures and can even be viable for sports in the hands of experienced photographers. Typically, this rate slows down to 8 frames per second when shooting with live view on the screen. 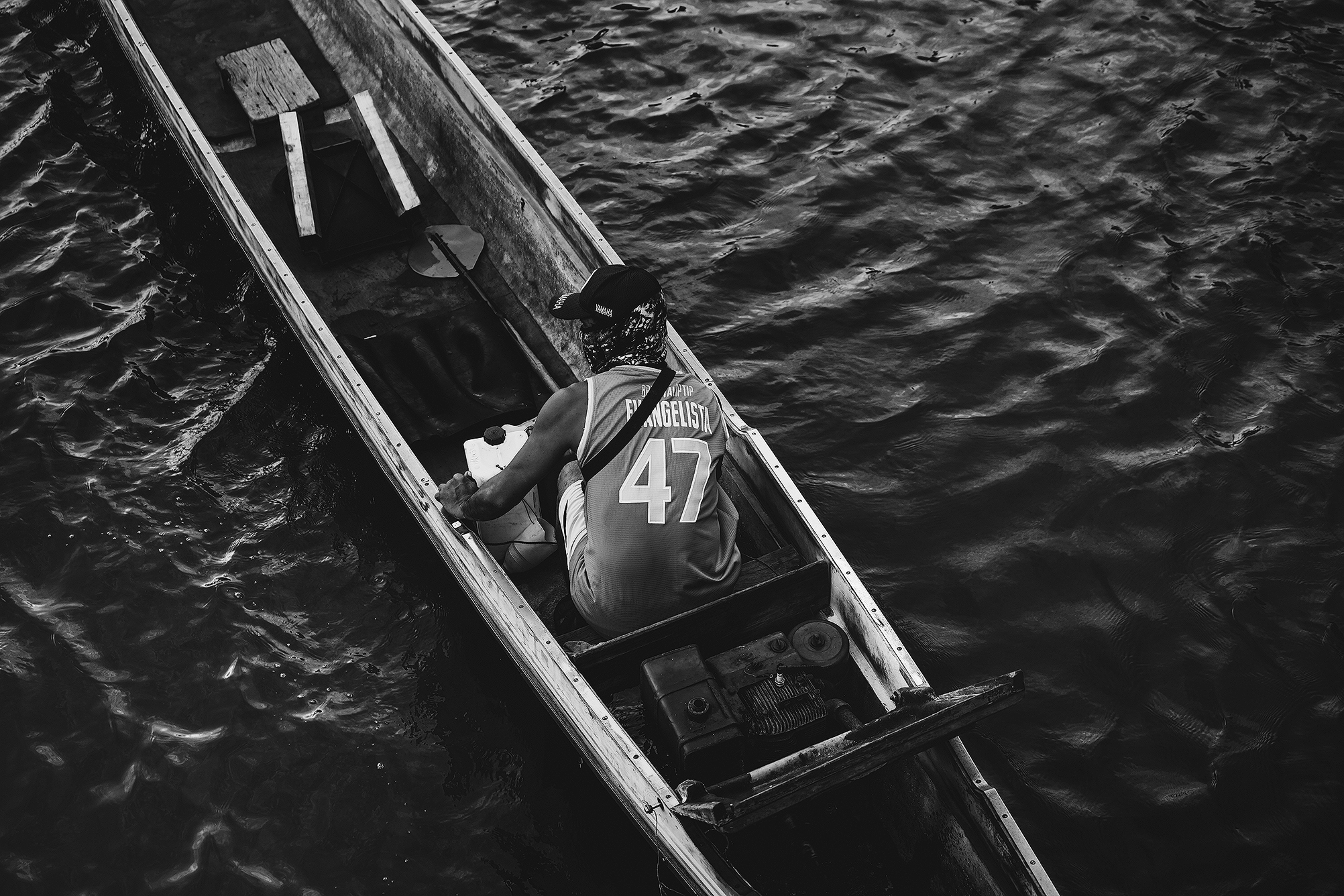 The compact a7 also features the 4D acquisition and tracking advancements found in the Sony a9 line that can perform even at -4 or +20 EVF. 93% of the image frame is covered by 693 phase-detect autofocus points for better point selection and precise tracking. It can also do real-time human and animal eye autofocus (with the option for preference over the left or the right eye) for better-assisted focus tracking. 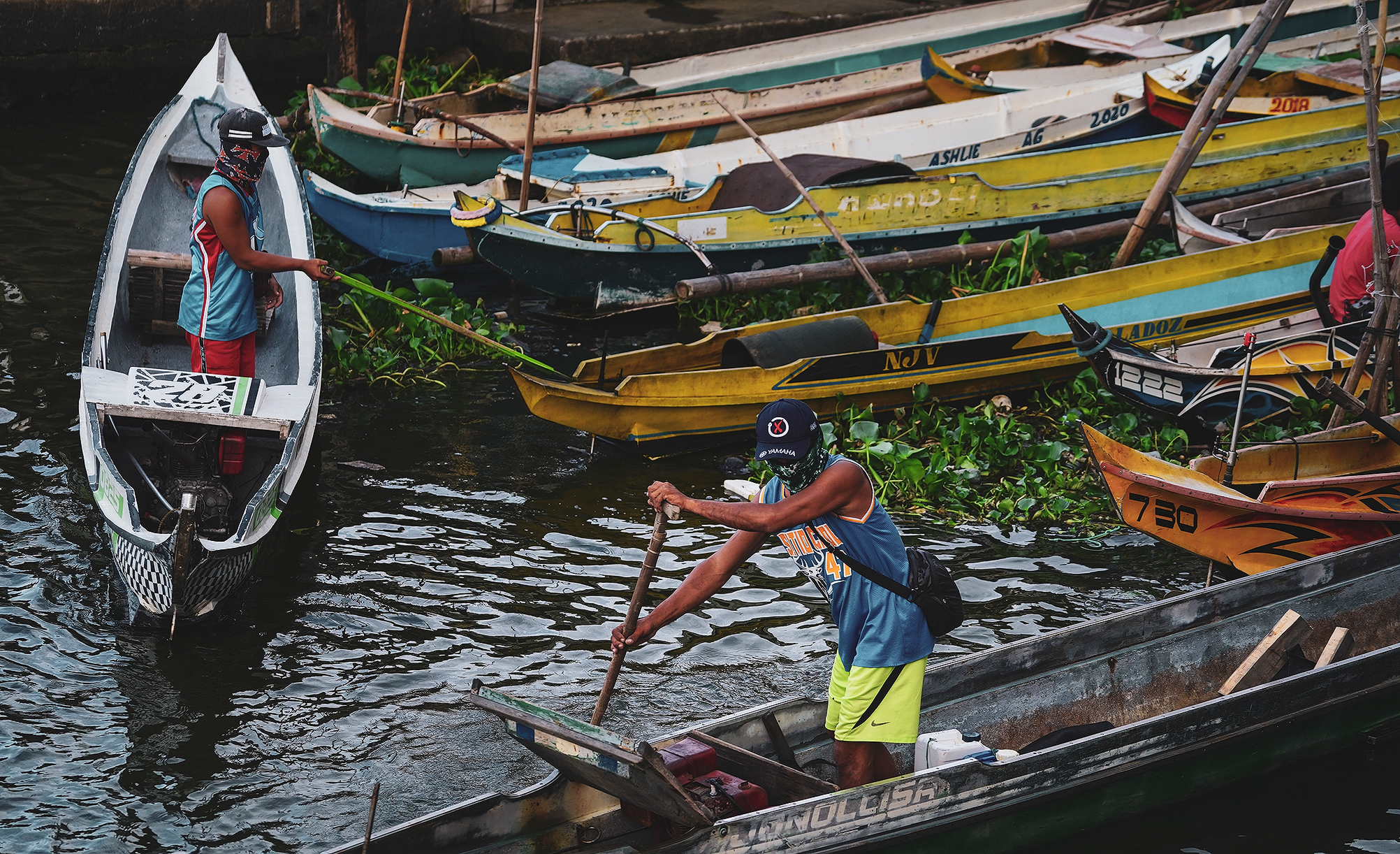 The a7C features 5-axis in-body image stabilization that is quite reliable for compensating against angular, shift, and rotational movements. In certain situations, this can have a compensatory effect of up to 5 stops. Paired with gyro information for video metadata, the resulting stability can be considered quite comparable to using a motorized gimbal. Though requiring stabilization in post, this can do wonders for creating on-the-go footage, especially for video creators (and vloggers) who shoot outdoors with minimal support equipment.

The a7C features the essential ports and wireless connectivity of most other Sony mirrorless cameras. On the left panel is an audio input port for microphones and receivers, a headphone port for audio monitoring, a micro-HDMI for video output and external monitoring, and a USB-C port for media transfer, external control, and battery charging.

One downside to the reduction in body size of this full frame camera is that the second SD card slot found in the a7 III and a7R series cameras came as a trade-off. It is, however, understandable that this camera is positioned more for users who would prefer the compact size for on-the-go shooting than data-heavy, fast-paced workflow shooters who require a second slot.

The camera is also equipped with Wi-Fi and Bluetooth connectivity and compatibility with the latest Sony Imaging Edge mobile and desktop application, as well as the new Imaging Edge webcam feature that allows for the use of the camera for video conferencing and live-streaming without the need for complicated connections. The a7C is also capable of wireless microphone input using the hotshoe interface.

Perhaps another great point about this camera is that it makes use of the more powerful NP-FZ100 batteries used by the a7 III, a7R III, a7R IV, and a9 cameras. It's rated to be capable of taking 680 shots with the use of the electronic viewfinder and 740 shots with the monitor. 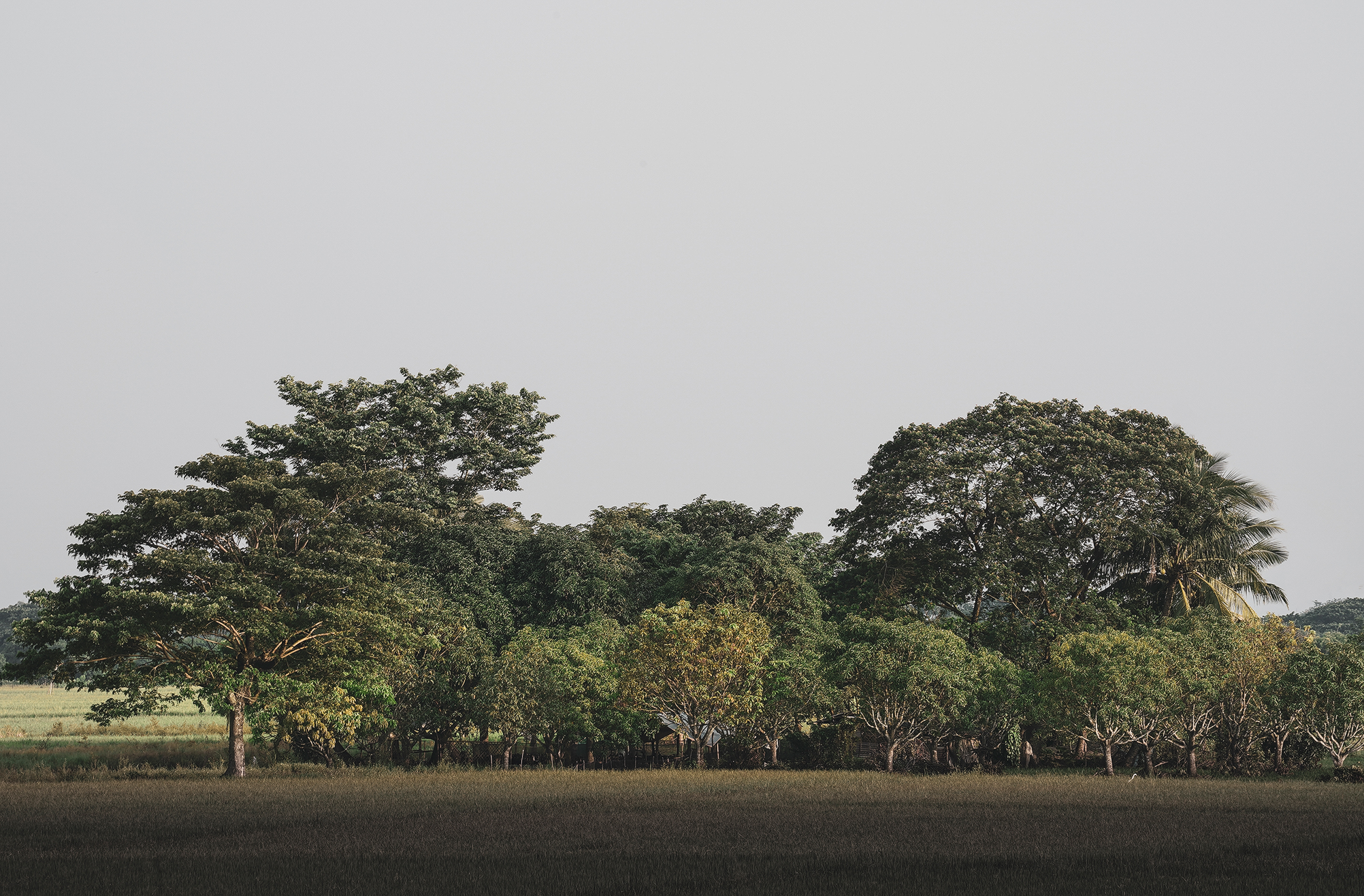 As an outdoor photographer who predominantly shoots travel scenes and landscapes, the Sony a7C is a very capable camera. Shooting while walking around in a certain location is convenient even with the smaller electronic viewfinder and is made more flexible for shooting with the screen through the vari-angle touch monitor. 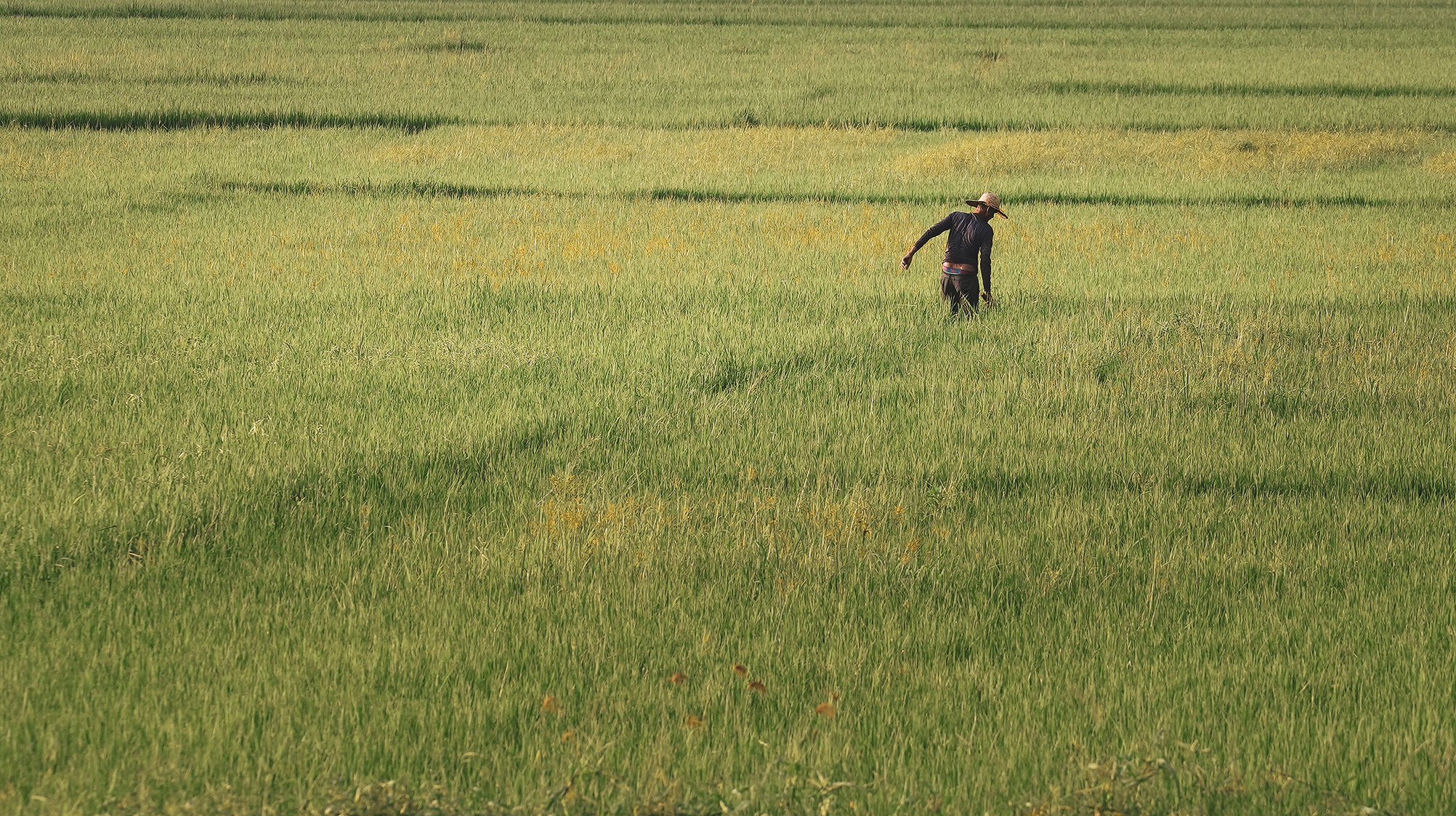 Image quality was never in question with this camera. Having experience with this same sensor in another form, I was comfortably secure knowing what images it can create, what lighting conditions it can adapt to, and how well it can compensate against movement. 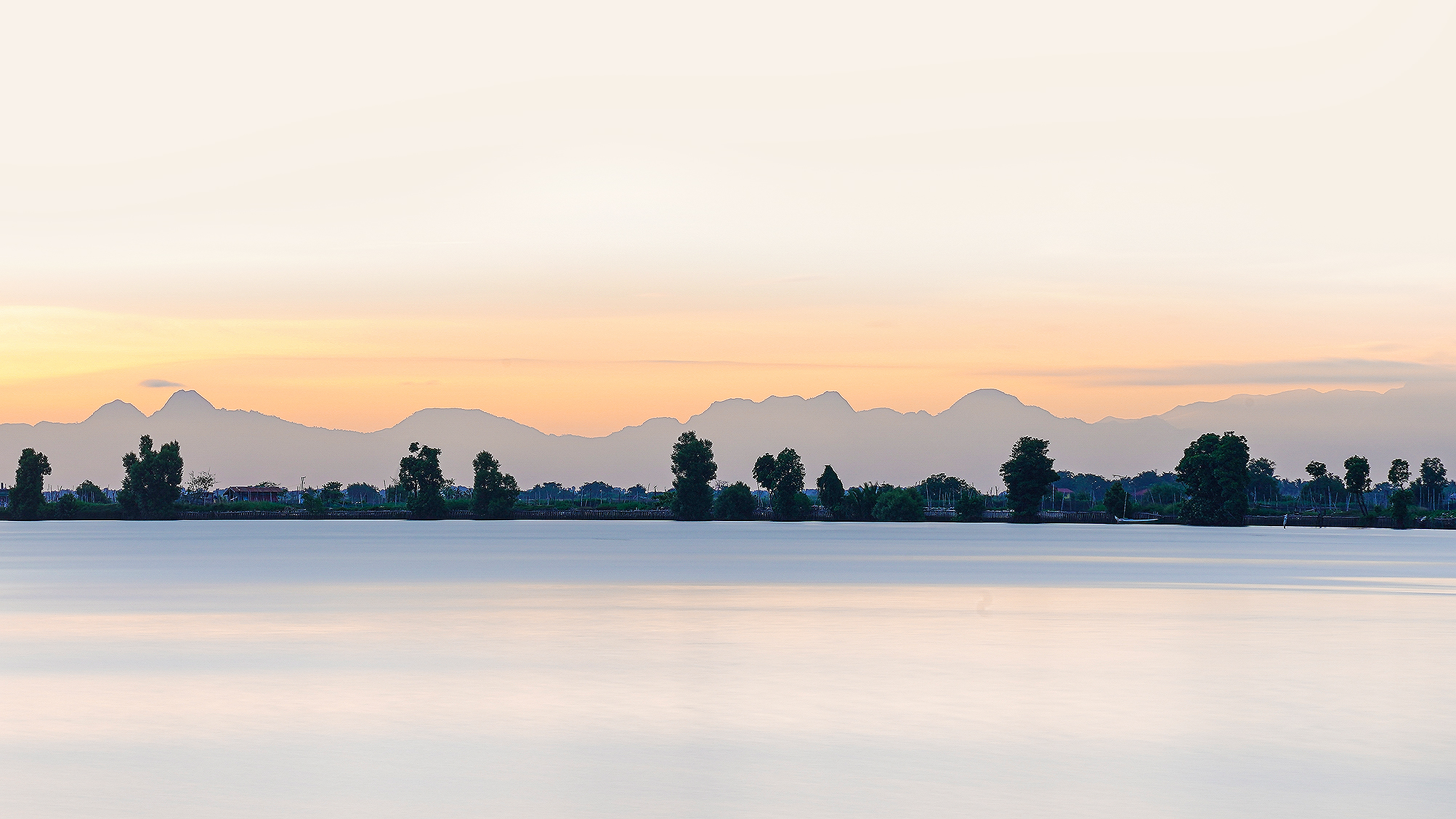 Though the weight difference may not be too significant compared to older full frame Sony a7 line cameras, the difference in dimensions can have some significant implications. This, of course, depends entirely on the user’s choice in lenses. I personally use the smaller and lighter Sony FE 16-35mm f/4 and 24-70mm f/4 for travel and shoots that require long walks or hikes, and the overall space that the camera body and the small lenses take up is considerably less, allowing for either a lighter load on my back, or more space for more gear and travel essentials. I haven’t personally tried the bundled FE 28-60mm f/4-5.6 kit lens, but a standard zoom in that size can realistically optimize the compact form of the camera.

You can purchase the Sony a7C here.

This is gonna have to drop in price pronto, now isn't it?...

Everyone's dropping prices. The gravy train has ended for camera manufacturers, and they can't afford to continue the price gauging they've been practicing for years.

Man, sure hope you are right. About time to get a portrait specific camera.

Now's pretty much the time.

Can Sony implement the new menu system with a firmware update? Wondering if you (Nicco Valenzuela) can point out a few specific features which make the Sony menu so bad. Every camera review I've read includes a complaint about it. Almost like people want Sony to replicate another brand's interface. I don't have an outside reference so to me, the menu is what it is. I sat down with the manual, learned where everything is located and their functions.

personally i dont think it's bad but because there are so many options and features to be selected within the menu system especially for the higher end models, the menu got a bit complicated. The new menu for the A7sIII (and Im hoping the other cameras to come) has been simplified and categorized better.

The new menu comes with the Bionz XR processor. This one has the Bionz X. Not exactly tied up to the chipset but its more of old tech has this and new tech has another. The Bionz XR is the newer processor

This camera is priced way too high. It has nice tech, but its form factor is not the best. Maybe a price point of $1299 would be more fitting.

Why do Sony files often look life less? Have to do so much to get them just right.

Dunno why you got down voted. Your not wrong. Straight out of camera Sony files are super flat. You really need to shop them to get them looking good which is what I think the biggest benefit of the Sony system is. Sony raw files have so much wiggle room for editing it's probably more like full body twirling room. the files are suuuper editable and are great for people who edit everything they shoot. If some one is looking for a camera that gives you great result straight out of camera I'd pick just about anything other than sony or panasonic. Not bad systems but not great for straight out of camera files.

If youre looking for straight out of camera jpegs with more color and contrast, theres a multitude of ways to achieve that in camera. There are picture profiles, creative styles, you can even customize them to your liking. If you never touched those settings, most likely your camera is set to standard or neutral and probably that's too bland for your taste. The options are all there.

The options are all there, yes. And if you shoot RAW there are numerous in-camera profiles, so lots of options, and no more work than any other camera. For my tastes I quite often go back to "camera light".

If raw, it's supposed to. Read up on raw vs jpg.

I have been wanting to move to FF from APS-C for a while, but as great as the a7III is, I have been unwilling to move because of the additional (roughly 30%) larger size and weight of the a7III. Sony has answered my wish and it is $200 less cheaper.