Get Out There and Shoot

With Christmas solidly in the rearview mirror and that shiny new camera that Santa brought screaming for some action, it is all on you to shake off that excess holiday cheer and head outside to see how you and your gear performs.

Sure, it is cold, and there might even be some of that white stuff on the ground, but you shouldn’t let that stop you from getting the shot. There are so many opportunities to capture unique images, day or night, that the only thing between you and an amazing photograph is your backside. Breaking in your photography gear should be enough of a push but if it isn’t, I’d like to share three tales of interesting shots that were nearly lost if I hadn’t found some motivation to head out or stay out in the field.

That Time When a Rocket Body Disintegrated Right Above My Head

The moon was shining brightly to the east as I made my way down from the summit of Mauna Kea on the Big Island of Hawaii. I had spent nearly eight hours doing nightscape photography in the oxygen poor atmosphere at 13,500 feet and had a mild case of altitude sickness to show for it. It was two in the morning, my head hurt, and I was tired. Yet, somewhere around 11,000 feet the view of the clouds sitting in the saddle between Mauna Kea and Mauna Loa called to me. I pulled the car over to the side of the road, got out my gear, and started shooting. I decided that a panoramic would be the best way to capture the expansive vista from the east side to the west side of Hawaii Island. Orion was nicely positioned over the road and I thought that it would make a nice right side of the composition. It would take fourteen portrait orientation frames at 25mm to create the shot I envisioned so I started towards the east with five-second exposures. As I was getting ready to snap the final image, I noticed an extremely bright light heading towards me from the west. It was too moving fast to be an airplane but not fast enough to be a meteor. It was too bright to be a satellite. Then, without warning, the singular light exploded into a dozen smaller colorful streaks of orange, pink, yellow and red, punctuated by a main white light leading the way. For some reason, the brain expects there to be a gigantic boom when something like this happens, but there was nothing but an eerie silence accompanying the orbital fireworks going on above my head. 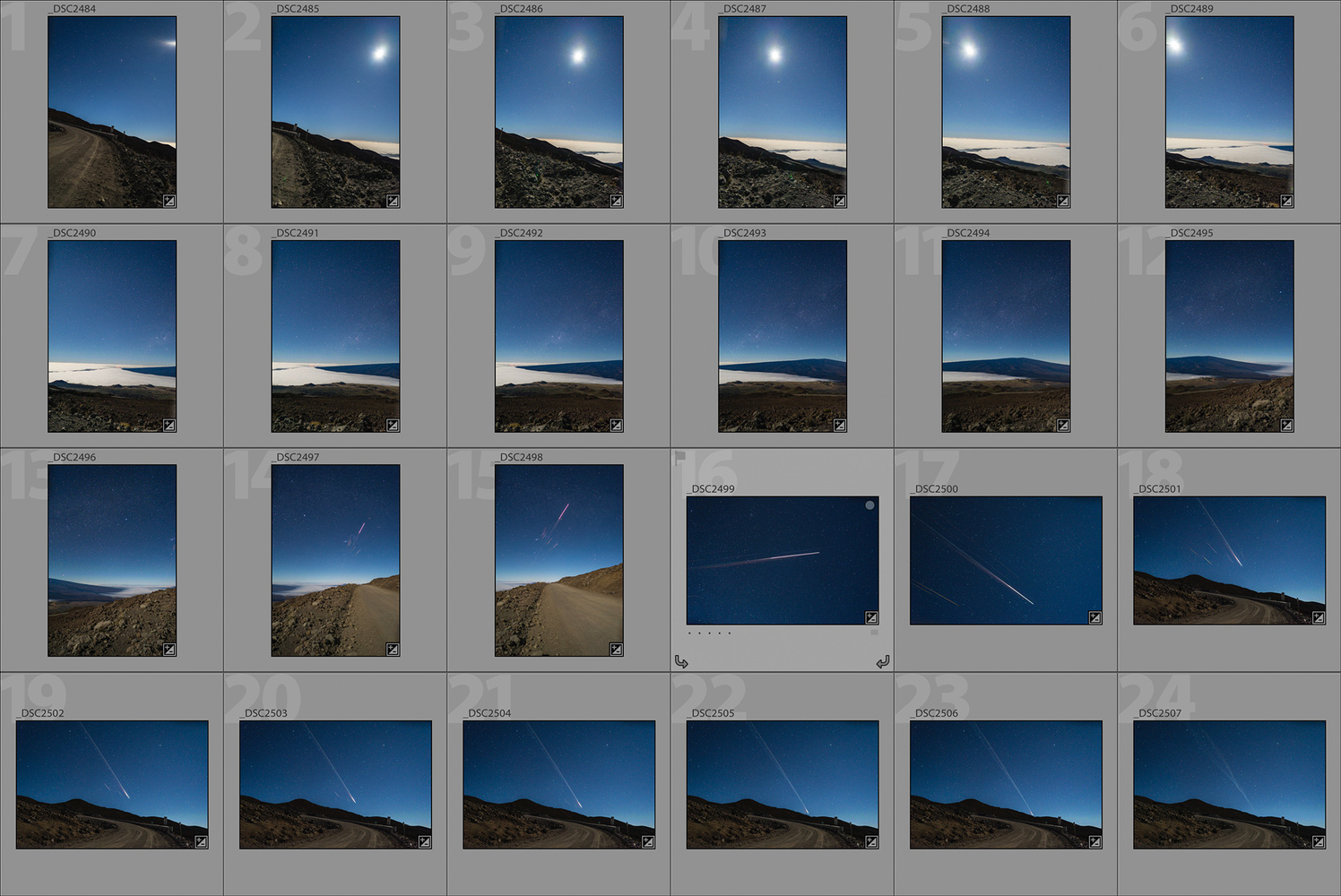 Contact sheet showing the original panoramic frames for "Orbital Fireworks" plus the images of the Chinese rocket body as it passed overhead and below the horizon.

From the time the action started to the moment that there was just a wispy smoke trail remaining in the sky was only about four minutes. To my surprise, in that span, I was able to fire off twelve five-second shots with noise reduction, including the repositioning of my tripod and camera three times. Without being extremely familiar with my camera, lens, and tripod, it would have been really easy to miss most of the shots. Naturally, as anyone in this day and age would do, the first order of business was post about it on Facebook straight away. 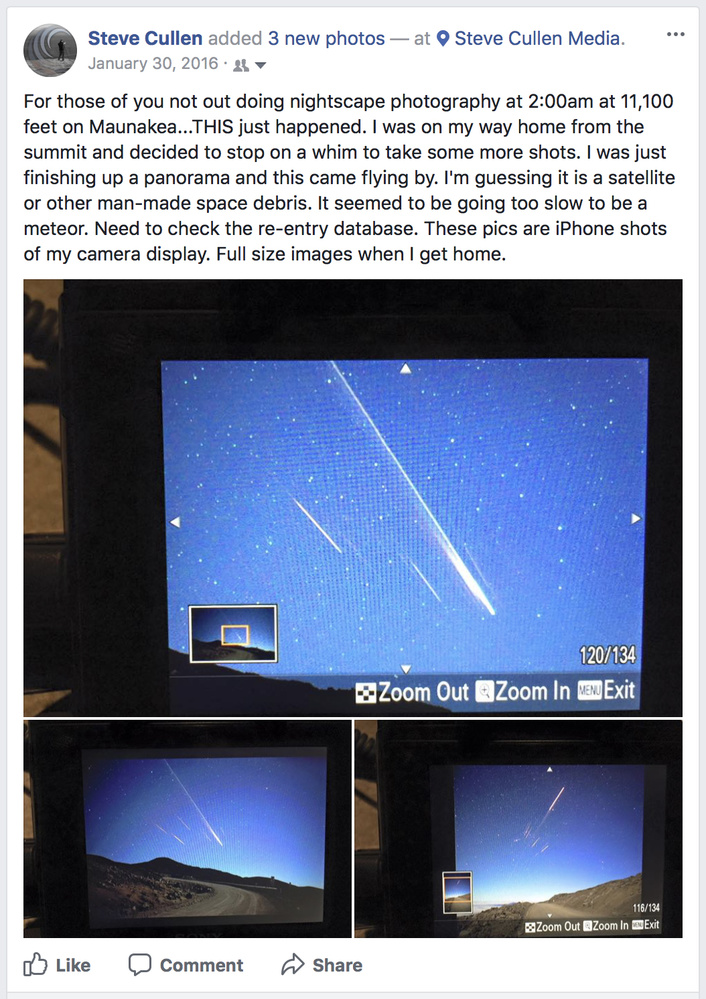 Multiple frames from "Orbital Fireworks" captured from the camera display by cellphone.

As I was typing, all of the scenarios for what I just saw were going on inside my head. In passing, I also thought about how remarkable it is that there is actually cell service over two miles up on the side of a volcano in the middle of the Pacific Ocean. At the time, I had guessed that it was some kind of man-made space debris. After I returned home I was able to determine that it was the body of a Chinese rocket, CZ-3B to be precise, burning up in the atmosphere. A good, wise friend put it nicely into words when he saw the shot on Facebook, “passion and luck collide.” Indeed.

On the tail end of a long photography trip to Glacier National Park, I decided to stop off in an area of eastern Washington state known as “The Palouse.” This part of the state is known for undulating countryside with spectacularly colored fields of wheat, barley, lentils, and chickpeas. It was cloudy with scattered showers for much of the time and there didn’t seem to be much point in heading up to Steptoe Butte, the highest ground in the region, to try to capture the Milky Way. While sitting in my relatively comfy hotel room processing shots from Glacier, I forced myself to load up the car to go see what was visible from the top of the butte. Miraculously, just as I arrived at the summit, the sky cleared up and the Milky Way was beginning to arch across the southeastern skies.

"Extra Good Light" with the surprising Northern Lights on the left side of the panoramic.

While waiting for it to get into position, I kept catching a glimmer of light out of the corner of my left eye. Whenever I’d turn my head to look, there wasn’t anything visible except the red flashing lights of the wind turbines scattered across the horizon. As is the case at night, averted vision is much more accurate than when looking right at the target. This happened a few more times as I continued to take in the view so I decided to break out my always handy night vision monocular to help boost my vision. To my surprise, I could clearly make out a glowing arc of light to the north along with a few random pillars of light popping in and out of existence. The Aurora Borealis, or Northern Lights, had made an unannounced appearance. 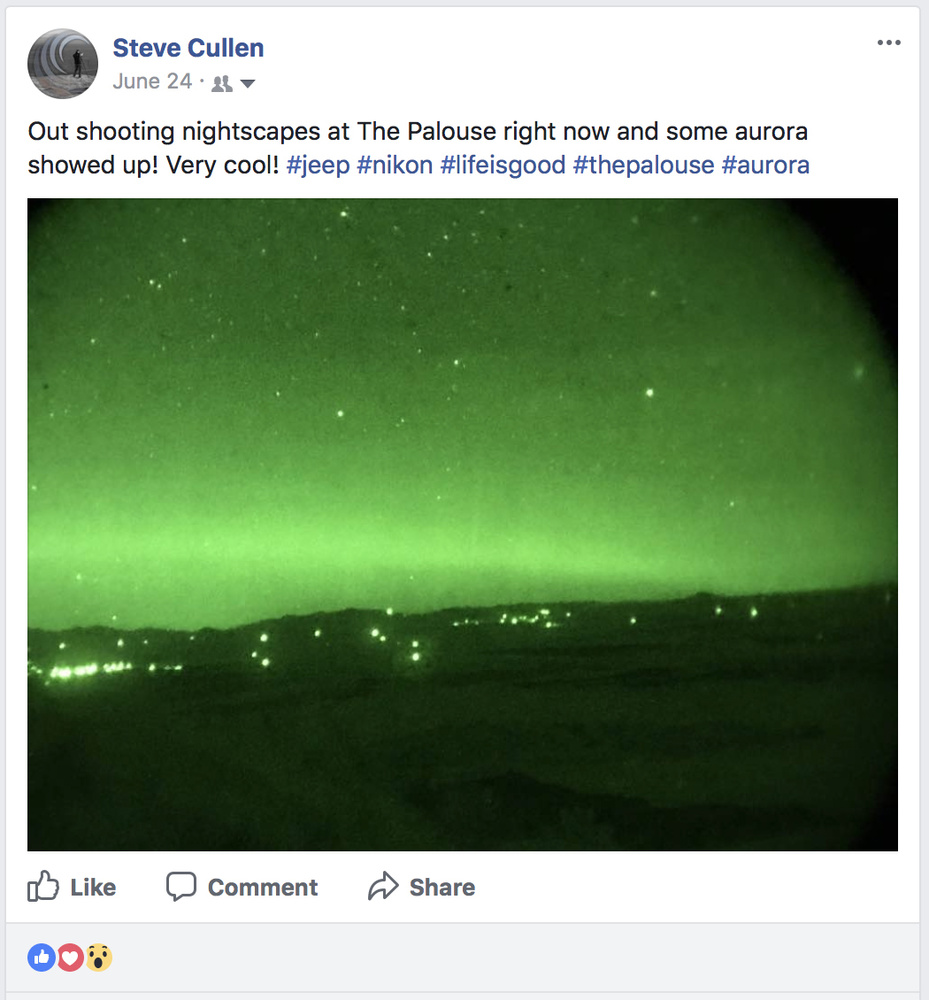 I usually receive alerts on my phone letting me know when the Kp-index, a measure of potential aurora activity, is elevated. This night, my phone was silent. It isn’t completely unusual to see the Northern Lights at the latitude of The Palouse, but when it isn’t expected there’s an extra joy in capturing it. It also adds a bit of what I call “extra good light” to a nightscape that most photographers aren’t able to include. I could have been cooped up in a room staring at a laptop screen all night, instead, I was rewarded with a terrific nightscape shot and a fun story to tell.

An Electric Sky Over the South Dakota Badlands

I lived in the southwestern United States for many years where the summer monsoon thunderstorms are legendary. Never have I witnessed an 80-mile long thunderstorm, with 50,000-foot cloud tops that raged on for over three hours. Fortunately, that is exactly what I watched over the badlands of South Dakota in late August.

"Rage" showing the massive thunderstorm across the plains of South Dakota.

I reluctantly drove to the region after a few weeks of photographing the solar eclipse in Idaho, the Moulton barn in Grand Teton National Park, Devil’s Tower in eastern Wyoming, along with countless other sights. I say reluctantly because I had been on the road for a long time and heading farther east meant an even longer drive home. Still, the photographer in me said “push on,” so I did. Man was it worth it! Badlands National Park is unique in its own right with crazy rock formations, oddly colored soil (“yellow mounds”), and fossils of camels, rhinos, horses, and more. For me, the park was a destination to shoot some unique nightscapes of the Milky Way but I came away with much, much more. As day turned to night, my phone was going wild with weather alerts warning of approaching severe storms from the northwest. It looked like they were going to stay well to the north of me so I figured I would be safe and also that I wouldn’t have a great view. A few hours into shooting, however, the storm track took a southerly turn bringing the entire front into view to my east. To my amazement, the clouds exploded in non-stop flashes of light from horizon to horizon. I would typically shoot with a wide lens at night but this monster called for some close-in attention and out came the 200mm lens. Usually, I would worry about trailed stars in my night time images but I didn’t care about them this time. I was on a mission to get a high resolution panoramic showing the entire fury of the storm. When it was all said and done, the first light of morning was beginning to wash out the inky blackness of the night. Once again, the decision to stay out and shoot paid off and I had been treated to a sky show that I will remember forever. 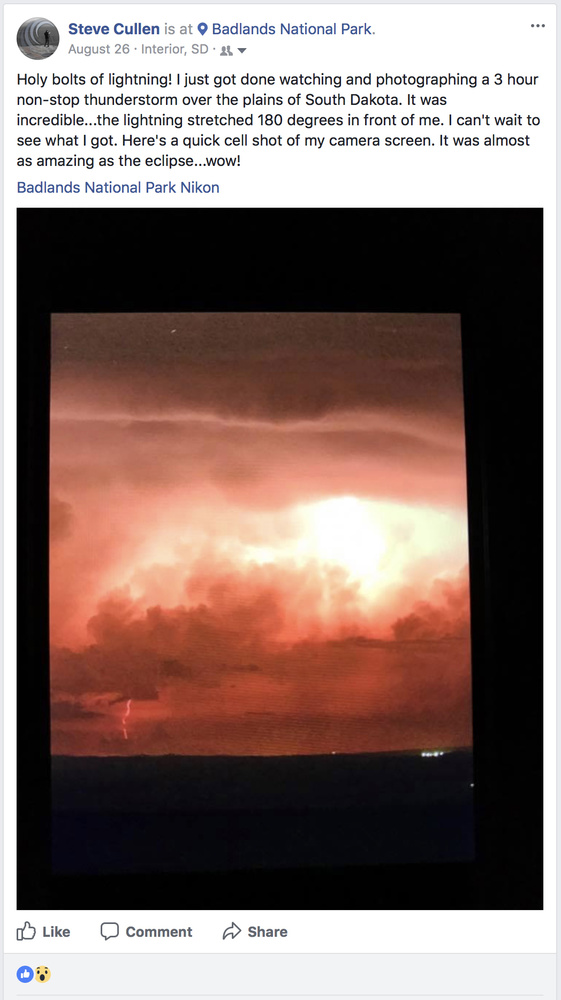 A single frame from "Rage" captured from the back of the camera by cellphone.

Don’t get me wrong, there are plenty of occasions where I have struck out. But, I can tell you with one-hundred percent certainty that you will not get the shot if you aren’t out there in the first place. Don’t miss out on that one-of-a-kind photograph. Make a New Year’s resolution to get up, get out, know your gear, and have your camera ready when the moment arrives. Oh, and don’t forget those all-important social media posts from the field so all of your friends can see how awesome you are at finding and shooting really cool stuff.

Where Art Meets Architecture 2 How To Photograph Luxury Homes and Advanced Photoshop Techniques
With Mike Kelley
$299.99

Steve, I remember when you first posted this image; I was just blown away. Your moment inspired me to not be stingy with shutter count at night and boy did it ever pay off! Great article and images.