Give Your Social Media a Good Ass Kicking

Websites such as Twitter and Facebook can be extremely powerful tools for our businesses however most of us are using them all wrong. Over the years we have continued to pile on layer after layer of distractions that in the end leave us feeling guilty of even trying to use social media. We walk away feeling like we wasted our time. It's time to regain control of these tools and use them for good to connect, be inspired and market ourselves. Read on to learn some valuable tips that have been real game changers for me.

I'll start with Twitter. I have been ridiculed by friends for my inapt ability at using Twitter. I have simply brushed it off and said time and time again that Twitter is a waste of time for me. While I had an account and I would tweet every so often or click the tweet button on articles I liked and wanted to share, for the most part I was never really spending time there. Each time I would open the Twitter feed I would be overwhelmed. There was so much there and at least 75% of it was worthless so it made no sense for me to be there.

Then the other day I stumbled upon an app for my phone called "Just UnFollow" and decided to install it. In short this app allowed me to filter through friends on Twitter and easily unfollow people. The initial free version of the app allowed me to unfollow 50 people per day but I quickly went through that number. In fact I caught the bug and decided that I needed to upgrade to the paid version for $5. With it I was able to filter through friends and find those who were not following me, or those who haven't used Twitter in particular time period. 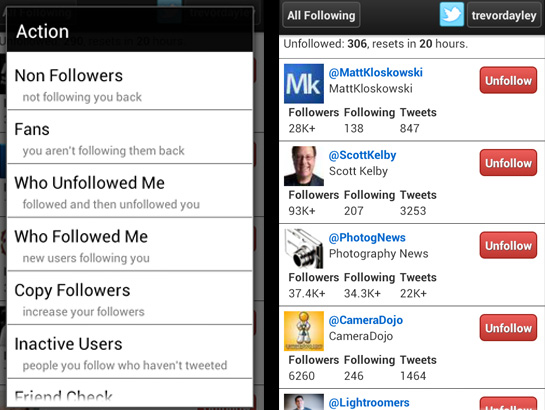 I was also just able to see lists of people I currently follow and click one large button "UnFollow" to start cleaning up my list. No need to visit each persons individual profile to do it. Within about 30 minutes I had my list cleaned up and went from following just shy of 1000 people down to less than 200. Now when I open my Twitter account I can see the information that is most interesting to me rather rather than a flood of indiscriminate tweets. It was completely invigorating and got me excited to move on to my next task... tackle Facebook!

Most of us having been using Facebook for 3+ years and over time have acquired hundreds (or thousands) of "friends" and liked thousands of different pages. As a result our newsfeed is just a complete mess. I spend maybe 5% of my time there but simply get frustrated by the random list of updates Facebook 'thinks' I want to see. It is mind numbing. It is a massive distraction and it is hurting our businesses.  In fact according to Mashable, our social media recreation could be costing the US economy $650 billion a year - or $4,452 per company. I absolutely think that is right on target. I know that personally the social media distraction has probably costed me at least $4500 a year. My goal for 2013 is to turn that around and instead of costing me money out of pocket use Facebook as a tool to really build relationships stronger, constantly be inspired by those I look up to and fill my mind with uplifting stories and ideas that will ultimately all contribute to building a better business. So I set out this morning to do just that... Here are some tips to take back your Facebook account without pissing everyone off in the process.

Step 1. Turn your "Friends" into Acquaintances. According to the Facebook Help page "The Acquaintances list is for friends you don’t need to stay in close touch with. People on your Acquaintances list will rarely show up in your news feed. You can also choose to exclude these people when you post something, by choosing Friends except Acquaintances in the audience selector. No one will be notified if you add them to this list." 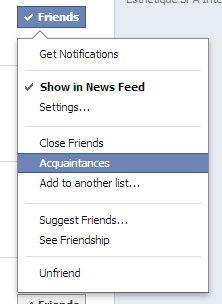 So in short I don't have to unfriend these people and risk making them upset. I can just turn them into an acquaintance and in so doing basically hide their updates from showing up in my newsfeed. Genius! You do this by clicking on your list of Friends and then just rollover the box next to their name and change the check mark to "Acquaintance." I can still stay in touch with the person, still message them, still visit their feeds when I want but by doing this I am now filtering my newsfeed to include just those that I really want to stay on top of. These would might include family members, best friends and people who inspire me. [Note: this process can also be done by rolling your mouse over a name that comes up in your Newsfeed then when their profile box pops up roll your mouse over the Friends box and choose Acquaintance from there.]

Step 2. Clean up all the pages you have "Liked" over the years. There are two ways to do this. One you can choose to unlike someone's page but again you risk upsetting the person (especially if it is a friend or another creative you respect.) While they don't receive a notification saying you unliked the page, if you are friends with the person they can see on their page which friends do not like their page. You then would show up on the list, which might make for an awkward subject the next time you meet. The other option is to tell Facebook you don't want those pages updates showing up in your newsfeed. To do this, click on the box on your newsfeed that shows your list of LIKES.

When that opens click on EDIT in the top right corner. You will first be presented with your "Favorites" which you can easily change up. If you scroll to the bottom you will be shown all the Pages you have liked which can be filtered by year. Where I would encourage you to start is first go through and UNLIKE any pages that you have honestly just lost interest in. It might be some of the large brand names you are no longer interested in or some of those popular temporary pages that pop up virally that you have supported over the years. Just start dumping a bunch. Once you got through your old "favorites" head down towards the bottom and click the link "Other Pages You Like." Click on that and a convenient box will pop up that will allow you to go to town unliking pages. If there is absolutely any question as to whether or not you might actually like the page, don't unlike it and read on to the next step. 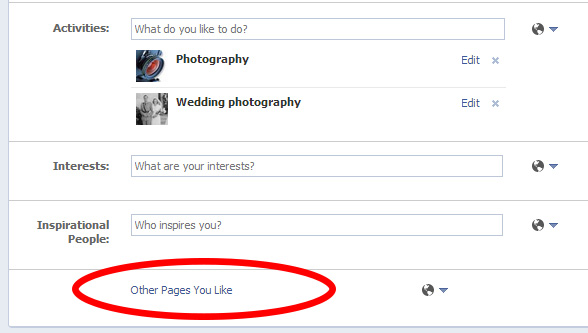 Step 3. Now that you got your LIKES down to just the ones you actually want to "Like" it's time to start weeding them down to just the ones you want to show in your newsfeed regularly. Now this might sound harsh and I realize some people will say if you don't want it to show up why even "like" the page. My answer would be that while I want to take back control of the powerful tool that Facebook really is I don't want to hurt friends along the way. In other words if we start unliking pages of photographers that we network with or chat in groups with we might offend them or discourage them. That's not my goal. So the next step is to scroll further down the page where you will see the names and thumbnails of all the pages you still like. From here roll over the name of the business and a box will pop up. Roll over the "Liked" box and a menu will pop up, scroll down and uncheck the option "Show In News Feed." By doing this you are still a fan of the page but it is now no longer showing up in your newsfeed. By doing this you are actually benefiting everyone. Your newsfeed is cleaned up and the Facebook is now sharing the updates from that page with a larger percentage of people that actually want to see them. 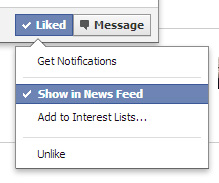 The other option you could do is by sorting your pages into Facebook Interest lists however the draw back is that your newsfeed will still be cluttered when you first open it and only after you click on an interest list will it then be filtered to those pages you really want to see. It's a nice feature but doesn't really help me clean things up as much as I want to. In the end this will take you a couple hours maybe even a couple days. But ultimately you will have two tools back that will now be a tremendous asset to your business rather than a distraction.

Think about how it will feel to open Facebook and have your newsfeed show work from artists that really inspire you, photographers that blow you away, or pages whose updates you are actually interested in receiving. How about the feeling of being able to stay updated on close friends, family members or maybe even people that you have been hoping to work with in the future. Now you will be more efficient and use your social media tools efficaciously to make money rather than lose it.

Great article! I find myself constantly signing up for things because they are amazing "in theory" but then I'm quickly overwhelmed. This is so great! Thanks Trevor.

I was surprised of how many pages I unliked, and people that I unfollowed!

These tips are very important -I go right ahead and clean up, thanks!