Are you looking to get some new gear for cheaper prices? Here are some tips that can help you get better and safer deals anywhere.

The first few weeks after the holidays can be one of the best time periods to be looking for new-old gear. During the holidays, a lot of photographers end up getting new gear during holiday sales as an upgrade that they’ve been saving for all year or getting them as gifts from (very generous) loved ones. Because of that, after the holidays a lot of them tend to get rid of the old gear that they have as they may now be redundant, or they simply have no use for them anymore.

Buying used gear is a great way to save on your equipment purchases especially if your budget may not be as flexible. For photographers who are just starting out, especially those who are just trying out the craft, getting used cameras and lenses can be a more practical choice especially if you’re not entirely sure that you’ll be pursuing this new hobby permanently.

Given that the camera, lens, or accessory that you’re looking for is widely available, one of the first choices you have to make is whether to buy from a store that sells used gear, or directly from the owner of the item. Generally, purchasing from a store like B&H gives you more assurance that the item has been thoroughly inspected for any issues and if they do have any, the item should be accurately described and priced accordingly. This is generally the safest route simply because of the store’s credibility and the fact that it is a registered legal entity. If incase you have any issues with what you bought, there is a set protocol for returning it or having it replaced. The downside, however, is that they might generally not be the cheapest deals available. This is understandable because you pay extra for the added safety, and you must understand that the store has to make profit from buying it from the actual owner. 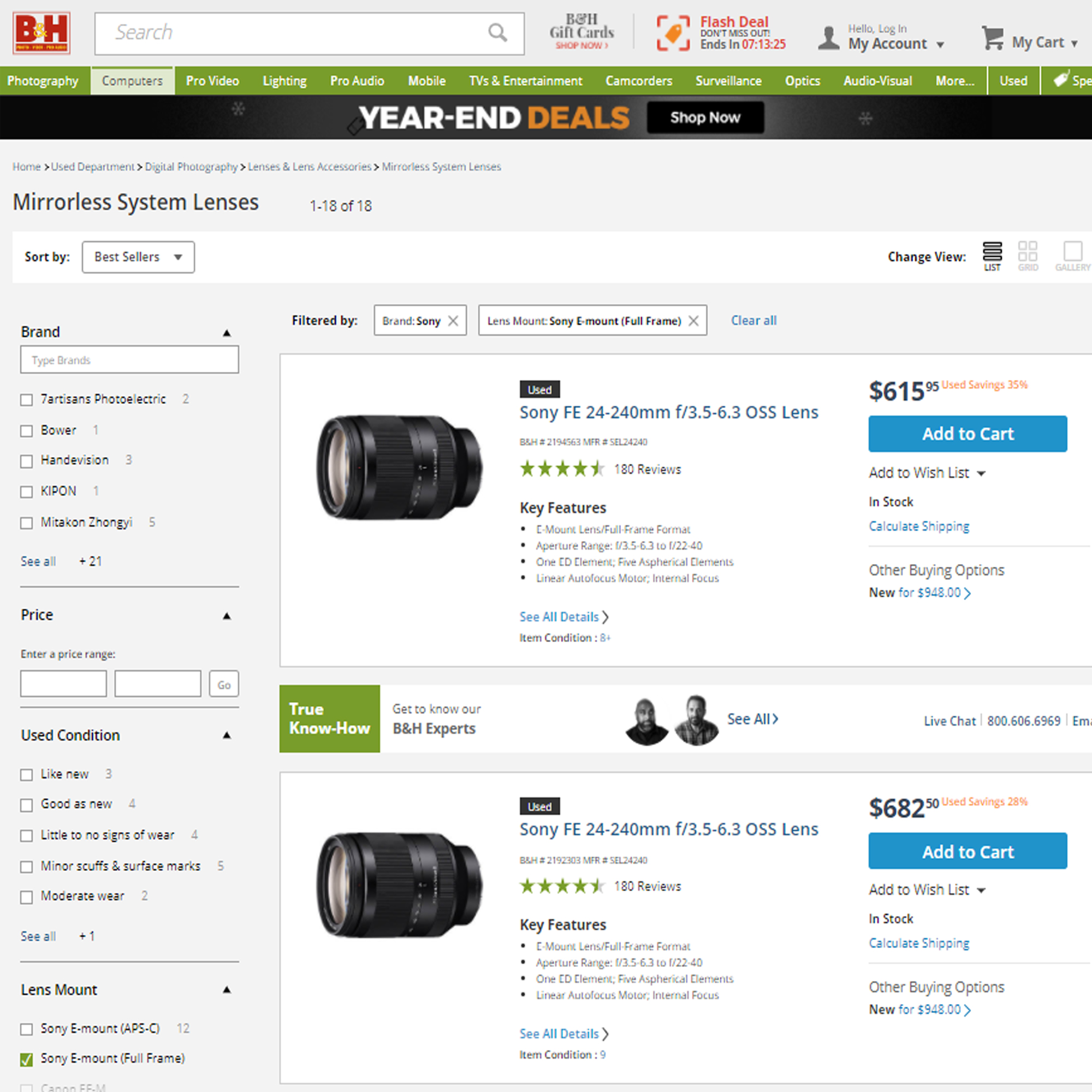 In contrast, the option of buying gear directly from the individual owner is now much easier to pursue. For the longest time, there have been options like Craigslist, eBay, Amazon, and more recently, Facebook’s marketplace. Choosing to purchase from sellers found there can generally be cheaper especially if the person wants to be able to sell it right away. But the downside is that you are more prone to being scammed if you aren't careful. Generally, it’s more practical to search for listings from people who are geographically closer to where you are. The best way is to meet with them in person and test out the piece of gear yourself, preferably with your own gear that you will be using the item with. For example, if you are buying a used lens, it’s best to see how well it would work with your own camera body and if you’re buying a new camera, make sure it works well with the lenses that you have.

If the person selling the item is too far away from where you are, another option is to look for someone you know from their area and have them meet up with the person and inspect the item thoroughly on your behalf. Of course, you’d be better of if that person actually knows cameras and lenses and can thoroughly inspect them before they purchase for you. If you don’t have such a friend, then your last option would be to as for sample photos and videos of the camera or lens being used. If it’s also possible, try and check for any feedback about the person and other items they might have sold in the past.

In any of the above-mentioned cases, there are a number of things to watch out for in testing used gear. It’s particularly important to be thorough when getting anything that doesn’t come out of a sealed box from a store because most of the time, they don’t come with any warranty and returning might even be out of the question for some. This is why before handing over your payment for anything you buy, you have to be sure that you’re getting your money’s worth and that there are not hidden or unnoticed flaws. 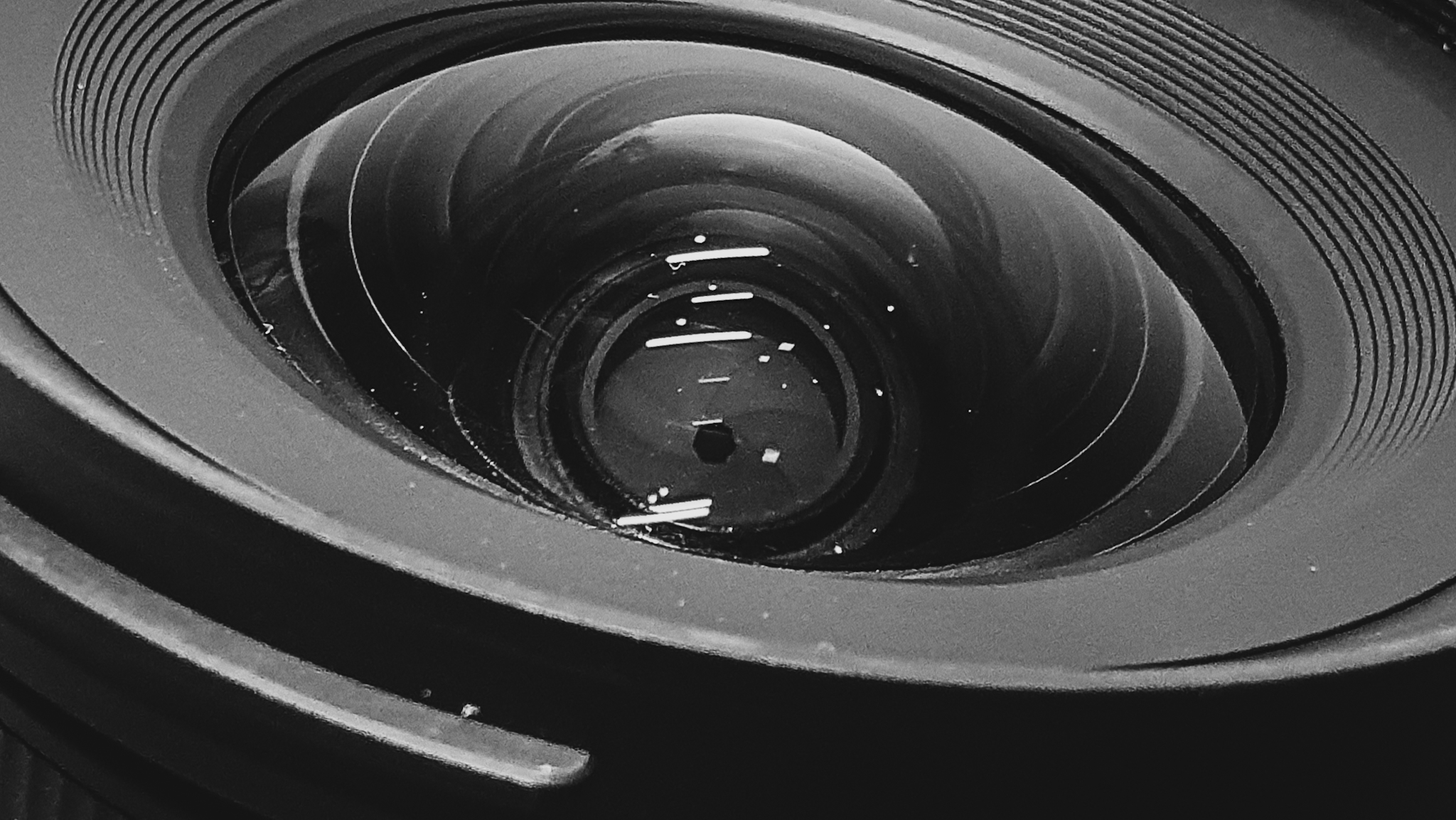 A thorough inspection of the cosmetics of the camera or lens gives you a good idea of how much the item has been used, and if it has been worn out and beaten. The age of the item isn’t always proportionate to how worn out it looks but a quick search of the serial number (for most major brands) can give you the exact year and month that the lens was made. Being able to check the shutter count for cameras can also be helpful, however if the shutter mechanism has been replaced, it won’t be an accurate measure of how old everything else is. In general, seeing scratches on the barrel, checking how loose the zoom ring rubber grip has gone, and if all the buttons, rings, dials and other operational points are working perfectly are the most important things to make sure of.

It’s very important to test out if everything in the camera or lens is functioning well and will continue to function well. In purchasing used cameras, it’s important to test both photo and video functions and see if everything goes right even up to the point of writing to the memory card and playing back. It’s also important to consider how quickly the battery runs out as you might have to get new ones which would be an added expense altogether. Doing fast continuous shots as well as a few minutes of video can also give you a clue on whether there are durability or heat problems. 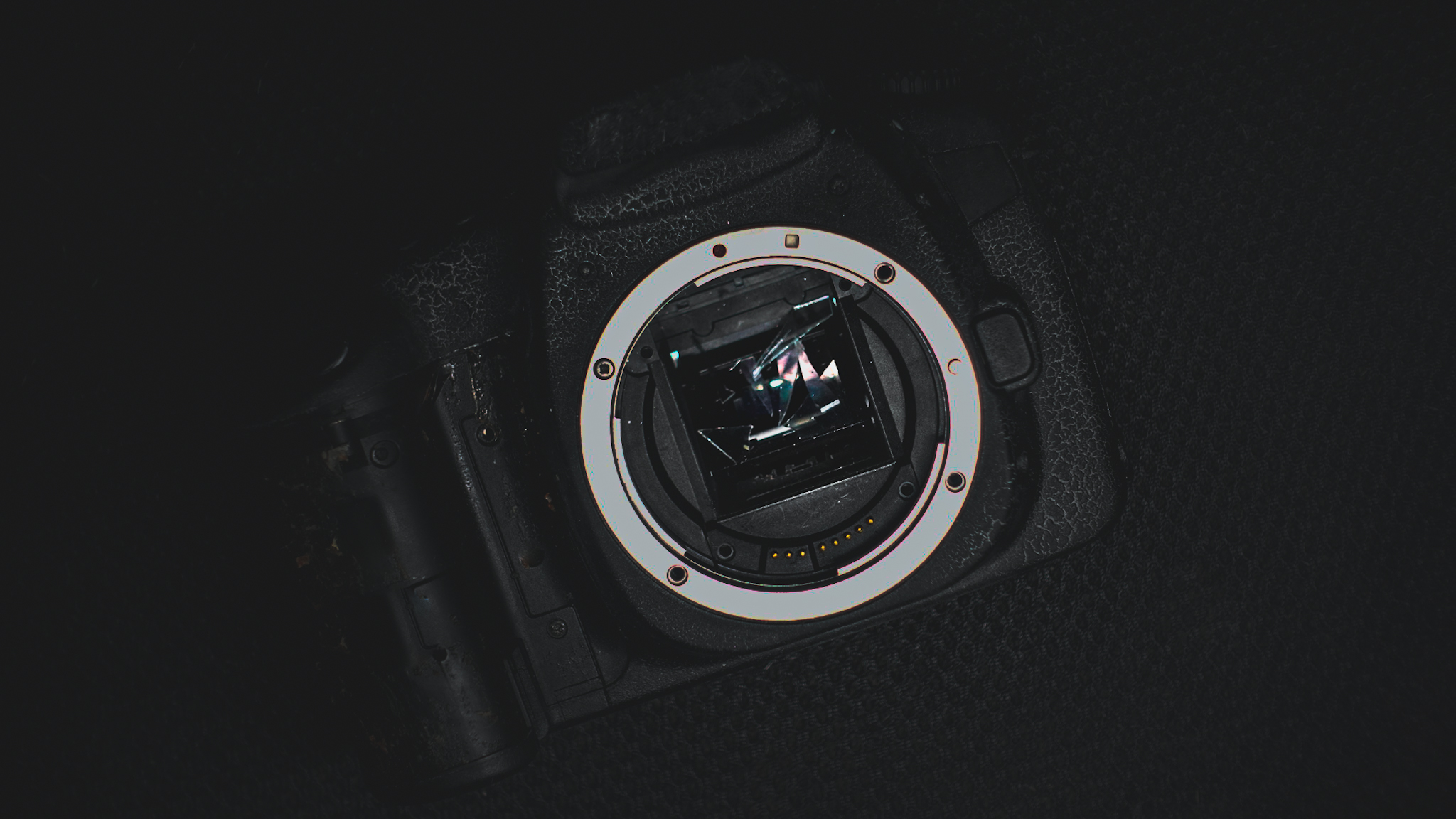 In getting new lenses, it’s particularly important to test all its ranges. Take sample photos with the lens from as many points in the zoom range as possible. There are some issues with some lenses that arise only in some specific focal lengths (for example, an error at 105mm in a 70-200mm telephoto lens.) It's also important to test the entire aperture range as there are also some lens issues wherein errors would arise only in specific f-stops. And lastly, test out auto-focus in various focal distances as well. The motor might have issues focusing up close or far away and it’s important to identify that.

It’s also very important to check the insides as much as you can. Check a camera’s sensor for noticeable damage, any dust that has to be cleaned out, or any fungal growth that has to be removed. The same goes for glass elements in a lens. Fungal growth in improperly stored gear can be a big deal breaker as they can ruin the quality of the images that you will take. It might also be very expensive to have them removed depending on how heavy the infestation has gotten. In some cases, glass elements have to be replaced entirely by an experienced technician and both the cost of service and the parts will be substantial. 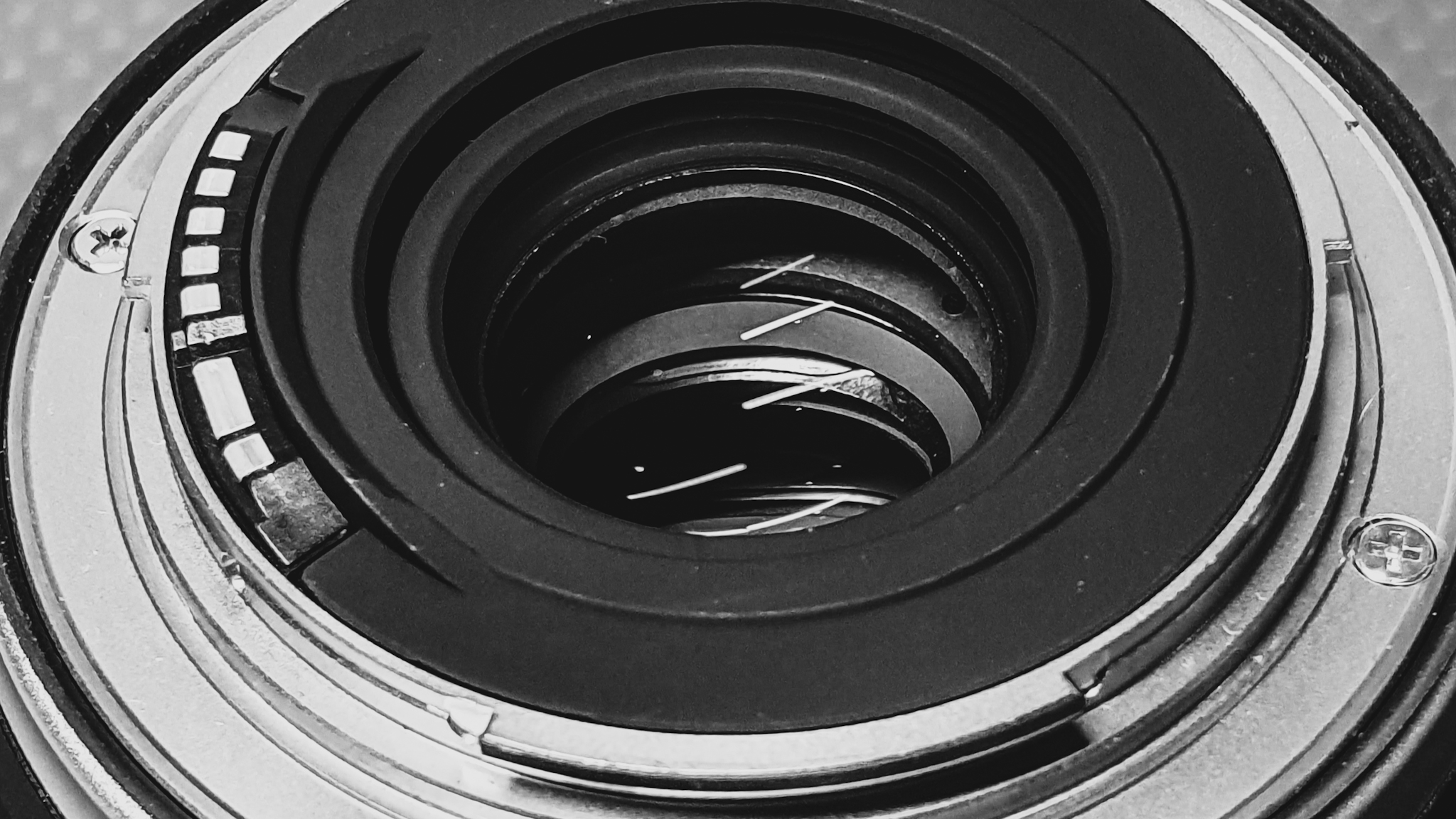 Lastly, consider everything else that’s included with the package. Do they come with the box? Are there extra accessories like pouches, straps, cases, or extra batteries? Even by a little, they add up to the value and purchase more sensible.

Pretty much all my equipment is second hand and I`ve never had any issues so I can wholeheartedly recommend buying second hand. It`s good for the environment, too. And you make sure that you don`t accidentally support any bad working conditions in production factories. However, when buying expensive stuff, I avoid buying from private sellers, as I wanna minimize any risk. There are some well-known camera shops that offer second-hand equipment and there are shops that even specialize in second-hand and have very knowledgeable customer support. I`m not sure if it's allowed to tell names here but when you google second-hand camera you should find quite a few.

dont spend much
all digital is thro away, no one fix
it out date in 6 month anyway