How to Make Your Photographs Resonate: Tell Untold Stories

Photographers understand the potential of imagery to change people’s lives, but sometimes this can work in very subtle ways. The most inspiring images can come from discovering a niche and, in the words of one photographer, creating what you want to see in the world. What happens when your own passion combines with something that deserves greater visibility?

A plethora of images bombard us every day and this sea of noise can mean that much is lost. Sometimes it can feel like mainstream visual culture is blind to seemingly niche groups, even if who they are and what they do isn’t that obscure. The zeitgeist isn’t deliberately privileging some groups over others, but because it thinks it knows what we want to see, it can be blinkered to other possibilities.

This is where photographers such as Irene Yee play such an important role. Much like my photographic niche of parkour, rock climbing can have a distinct gender imbalance. This is typical of many free sports (I’m not a fan of the term “extreme sports” because so much of what takes place outside of the media’s lens is definitely not extreme!), and women often get less visibility. The result is that these sports can appear as though they’re something that is for men, with female practitioners being an exception. 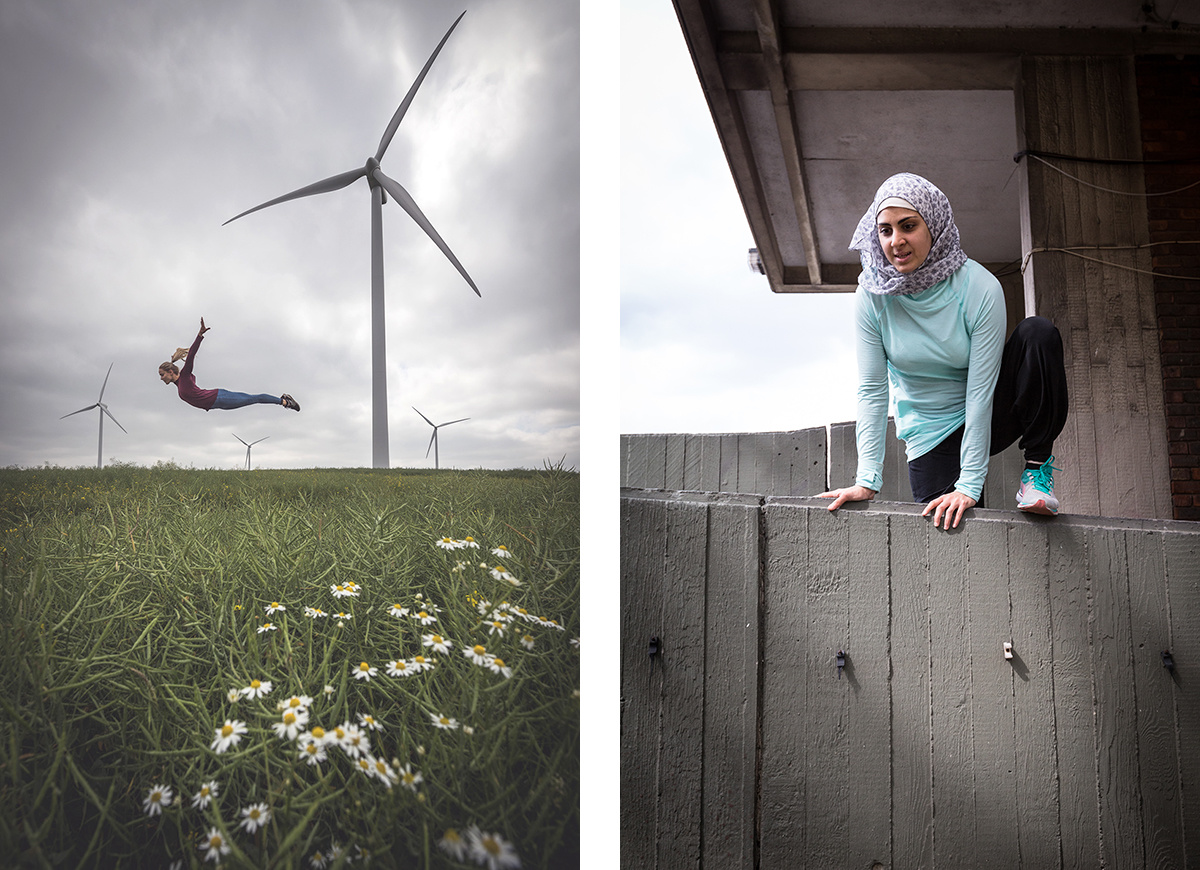 On the left, Katie McDonnell (stunts on Wonderwoman 1984 and Star Wars: The Rise of Skywalker) showing what elite female athletes can do. On the right, a woman training at a parkour event, giving a better idea of what it means to be a practitioner. (AndyDay.com)

99% of the media’s portrayal of parkour is on 1% of what constitutes the sport. Inevitably, the most visually engaging stuff — typically leaping between private rooftops at great height — is what proliferates, leaving little room for everything else. Parkour, as perceived through its edgiest spectacles, comes across as something that values only elite performance and high levels of risk undertaken by athletic young men, whereas the reality is very different. Away from the lens, the lived experience is characterized by a culture of effort, community, sharing, and each person pushing their own personal boundaries and deriving great value from it as a result.

The same is true of rock climbing, as conveyed through this uplifting video profiling photographer Irene Yee. Rather than documenting the incredible exploits of the sport’s best athletes, Yee is focused on creating imagery that portrays climbing as fun, accessible, and inclusive. Energy drinks and professional athletes are great for inspiring 13-year-old boys to get off the sofa and try something adventurous, but as a photographer, where’s the challenge in that? For Yee, it’s much more interesting to try and inspire those that are harder to reach.

Participation and visibility is the proverbial chicken and the egg. More diverse participants are hard to draw into a sport if there are no existing role models. Making a conscious effort to focus on minorities can shift that balance, and as Yee herself notes, it wasn’t until she stumbled upon a photograph of someone climbing with painted nails that she realized that climbing might be for her. 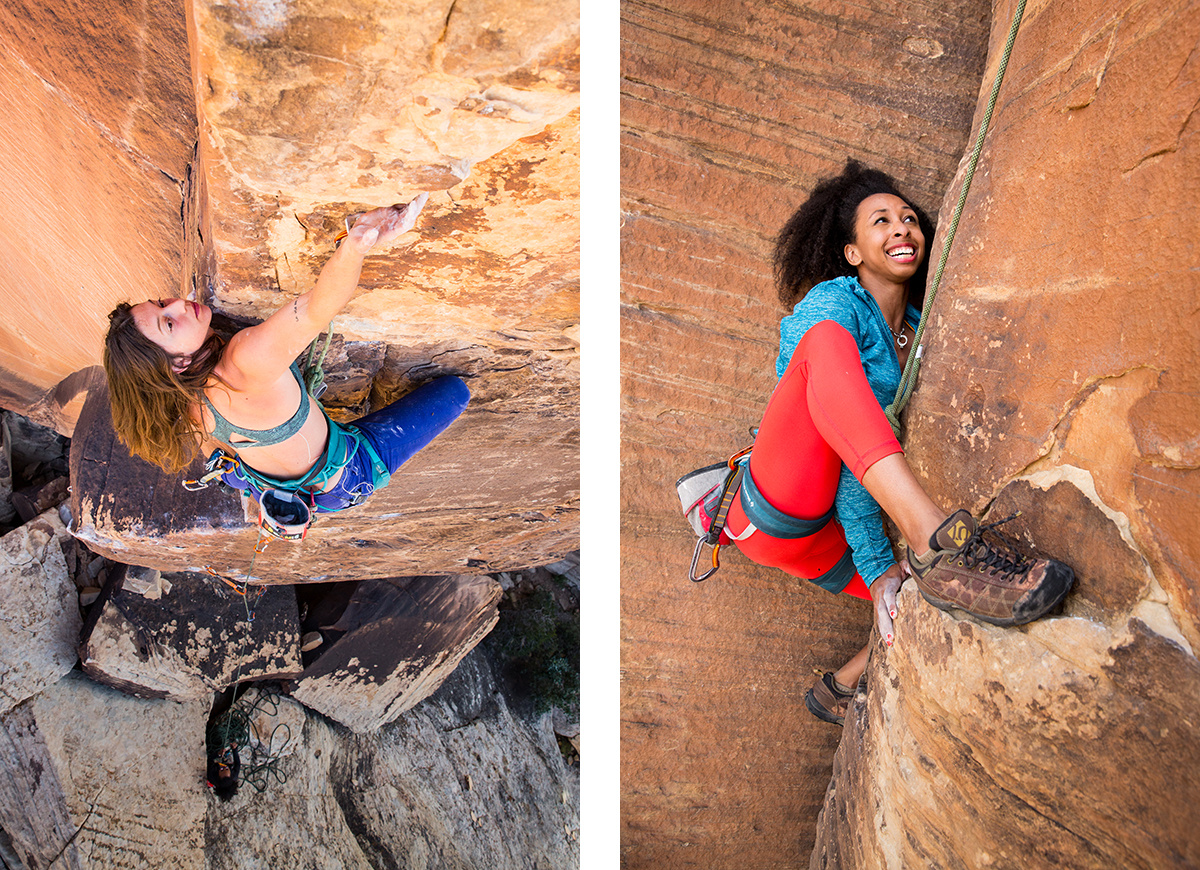 While social media often suggests otherwise, climbing doesn’t have to be about being strong and putting yourself in danger, and Yee fills a niche by telling stories that don’t fit into this stereotype. Alongside Yee, this series of videos produced as a collaboration between Canon and The Creator Class show other examples of photographs that create visibility for stories that don’t typically penetrate the mainstream.

Josef Adamu’s project is inspired by a desire to communicate and celebrate ideas that are born from the black community. Spencer Badu is producing imagery that rather than being edgy and aspirational — like the elite rock climbing athletes ticking off death-defying ascents — is instead intended to be relatable and accessible. While playing with ideas about gender, the locations he uses for his photographs are what we see in our everyday lives — parking lots and libraries — thereby connecting with us to what we see while also asking us provocative questions.

What links all of these short films is the desire to create something authentic that would otherwise go unseen. Each tells a story of something that resonates personally — whether it’s Tristan O'Brien getting up at 5am to punch a bag, or Luis Mora spending all night at a flower market that connects him to his sense where he's from. Each photographer knows that if you want to create images that resonate, one way is to find your super-niche and start telling the stories that need to be told.

Gear / February 3, 2020
Should Your Photos Improve When You Get New Camera Gear?

Opinion / February 6, 2020
Does Holding a Fuji Camera Give You a License to Be Obnoxious?