Is It Important for Journalists to Know How to Use a Professional Camera Anymore?

There’s been a tug of war in the last few years in photojournalism. On one hand, you have the skill and excellence of craft with photojournalists doing their jobs with professional DSLR and mirrorless cameras, and on the other you have reporters doing a “good enough” job with smartphones.

The dichotomy raises the question: If an iPhone-wielding reporter can draw as many clicks as a trained photojournalist taking a photo for a story, is it even necessary to know how to use a professional DSLR or mirrorless camera? In most cases, the public can’t tell the difference, nor do they necessarily care.

It’s something that, as a photojournalism educator, I’ve struggled with. I’ve firmly been (and still am) on the side of teaching budding visual journalists how to use a professional camera, because it’s not possible to shoot sports or photograph in the dark on a smartphone. Nor will you capture breathtaking wide-angle landscapes or scene setters with lighting just the way you want it.

Except that now, you can. Sort of, anyway.

The new iPhone 11’s wide-angle lens came as a surprise. Now sweeping landscapes and scene-setting shots are possible without resorting to weird panorama modes. Likewise, I’ve been impressed with Google’s implementation of computational imaging to produce useful imaging modes, such as Night Sight with its Pixel 3a phone. However, I’ve been less impressed with portrait mode and still question computational imaging as a whole for journalistic usage. Apple’s also playing in this space with its “Deep Fusion” AI in its new phones that will process an image “pixel-by-pixel” using machine learning.

A new wide-angle lens opens up possibilities for the iPhone.

With the extra lenses and sophisticated software on modern phones, they are capable of producing images that belie sensor size and optics. Software enables the phones to defy the laws of physics to produce images once only possible with specialized cameras and lenses. If one doesn’t worry about the ethical questions for journalists around the use of this software, then a world of photographic possibility exists in these devices.

Which brings me back to the original question: Is it necessary to know how to use a mirrorless or DSLR if you’re engaging in journalism? Yes, for now specialized journalists such as sports photographers will need their large telephoto lenses and cameras, as the zoom lens on an iPhone 11 Pro is probably not going to have quite the reach of a 400mm lens, but the day is coming where even this may be possible.

Then there are the other unseen advantages: It’s a less steep learning curve for reporters to learn to take pictures on a phone, and it’s a less intimidating view for the people on the other side of the camera. Photojournalists stealthily taking photos with a DSLR still also get thrown out of places more often than people with cell phones taking pictures out in the open, too. I was recently at Destiny USA mall in Syracuse, NY standing in what was labeled a “Photo Spot” on the floor and got stopped by mall staff and security every time I used a my Fujifilm X-T1, but never when I used my phone, so there’s that.

Does photojournalism still need interchangeable lens cameras, or are we at an age where learning such an ancient art isn’t necessary to produce good journalism? What would you do if you were training the next generation of journalists?

It's never about the gear.

Wrong question. Try this: "Is It Important for Journalists to Always Use a Dedicated Full-Size Camera Anymore?" As Mr. Joyce remarked earlier, it's more important to be at the right place and time. Determining what tool you need for a job is what qualifies you as a "professional".

Delends on the field of journalism. As you mentioned, sports journalism requires more sophisticated camera gear to start with, so sports photojournalists will likely need "real" cameras for a long time.

But everyday journalists capturing daily news? It makes more sense for publications to employ more people who can do it all. The best lesson you can teach your students is to develop more types of storytelling skills, no matter the camera or device. A journalist who can write, take photos, and make videos is a more valuable asset in media today.

It's up to the journalist to get a do it all phone every two years for $1K or get a camera. I would say get both and learn when to use the more appropriate one depending on the article. On the fly the phone would be perfect especially for immediate use, but for a more elaborate project a phone may not be the best tool to use.

Durability-toughness has to be an issue..depending on the type of photojournalism. I cant imagine a war-zone photographer without a bullet stopping brick that will shoot for days on a charge. But of course thats probably the most extreme photojournalism there is.

For now, but not for much longer. The cell phone is the new brownie, and outlets use what they get, "it's good enough" is the new standard. I was in the business 40 years, I'm retired now, but I can say that the time of DSLR's and mirrorless cameras are growing short as cell phones get better and better. As video gets better and you can pull a still from a video camera the days of DSLR's and mirrorless will be over. I believe that cell phones and video cameras will kill of DSLR's and mirrorless in the very near future. The new model for events will be, cell phone for internet, video for speed and outlets, and film for quality.
The days of photojournalist as you and I know it/knew it are over/coming to an end. Very Sad but true.

I had an interesting photo shoot a few weeks back, normal corporate event shoot, but with a twist. The client was hosting a press release for an automobile and the marketing exec wanted to showcase the CEO's and other execs being photographed by the media. In addition to my normal shot list, my client wanted me to photograph photographers taking photos of the execs (kinda meta...) In doing so, I found myself scoping out all the journalists and media quite frequently during my down times, literally half of them were just using iPhones, some with a mini tri-pod. The ones with a full sized DSLR (mostly Canons) looked clueless when they tried to use them and it seemed like a few of them were constantly staring at the menu screens trying to figure it out on the fly. Just some 2 cents from recent experience. 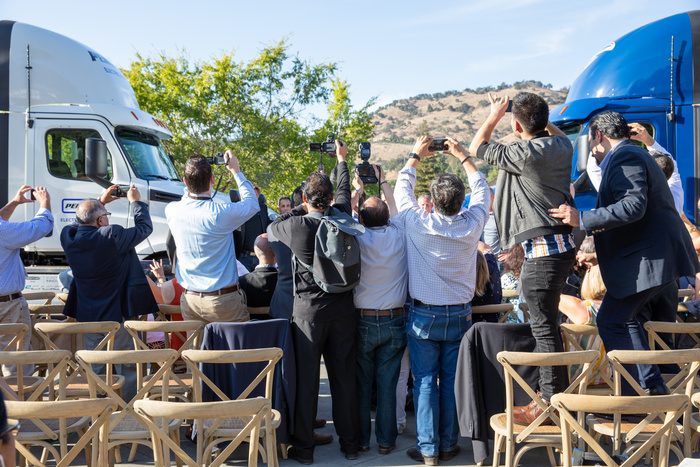 If you're sure you'll never need to take a photo in low light or with a telephoto lens, then don't bother learning how to use an ILC. All other photojournalists would of course be wise to learn the skill.

Those are cameras? I thought that was a new iPhone electric shaver feature.

Maybe a deeper question is do news outlets really even need trained, professional photojournalists AT ALL? More and more of the local news outlets are just using "bystander" cell phone shots, and some don't even have photographers any more.

Ok not strickly photojournalism but on a recent trip to Newfoundland my Sony fell on the rocks and terminally damaged my wide angle lens. I was reduced to a 100mm and my cell phone. Shockingly good results.

For journalism any tool rhat captures the intended nessage will work.