My Experience Color Calibrating My Monitor

I once tried to color calibrate my monitor... It was a disaster.

A few years before I started Fstoppers, I was a wedding photographer. Occasionally, I would print my photos, and I was always annoyed that my prints didn't look as good as they did on my monitor. I purchased a monitor calibrator, and after about 30 minutes, my newly "calibrated" monitor looked worse than it did before. To make matters worse, the "calibration" wasn't even consistent throughout different applications. My photos looked totally different in Photoshop, Windows Explorer, and my web browser. I tried to delete the color profile. I tried to uninstall the calibration software. I tried to use Windows Restore. Nothing worked. After two days of trying, I decided to wipe my entire computer and install a fresh version of Windows. Since that day, I have sworn that I would never attempt to calibrate a monitor again.

Datacolor recently reached out and asked Fstoppers to create a video about color calibration, and my team thought it would be funny if I was the one who had to do it. Datacolor claimed that their new SpyderX is the "fastest and easiest way to color calibrate a monitor." I'll be the judge of that.

The SpyderX comes in a small box with the unit itself, a serial number, and a website to download the software. After installing the software and typing in your serial, the software holds your hand as it asks you a few questions about your monitor. The calibration process itself took less than two minutes, and immediately afterward, you can see the "before and after" effects. I was skeptical, but I'm relieved to say that using the SpyderX was both easy and fast.

Although this is a sponsored video/post, I'm not going to say that everyone has to calibrate their monitors. I know many photographers who make hundreds of thousands of dollars a year who work on non-color-calibrated monitors. I know of a photographer who specializes in fine art photography and who has printed multiple art books who doesn't color calibrate his monitor. It can be done. I've survived for 15 years without calibrating my monitor. But, for me, printing has always been a hassle. Sometimes, I'm happy with the way my prints come out, sometimes I'm not. It can be extremely frustrating.

If you need to calibrate your monitor, you know who you are, and I can't imagine things getting much simpler than the SpyderX. Datacolor sent me the "elite" version that is $100 more and has a few upgrades from the "Pro" version. The details are below. 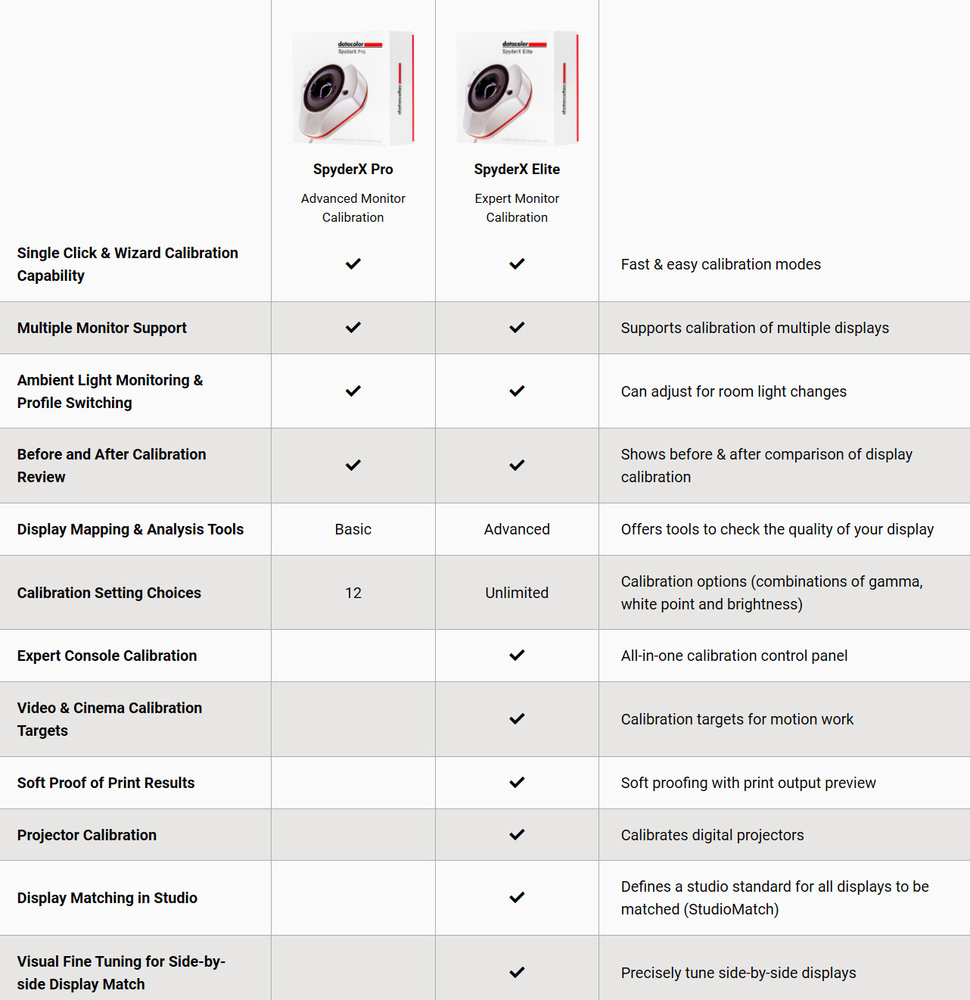 Keep in mind that this is only a third of the entire calibration process, though. To have totally seamless color from shooting, to editing, to printing, you'll also want a Datacolor SpyderCHECKR to photograph at each shoot, and then, you'll also want to create printer profiles to keep your monitor's colors in sync with your printers.

If you're tired of your prints looking different than your digital files or if you have very discerning commercial clients, give the SpyderX a try. It's not that expensive, and it only takes a few minutes to get your colors under control.

I love the SpyderX Elite its fast, accurate and the best solution for multiple monitors.

IS not accurat at all! Preliminary evaluation of the SpyderX by Graeme Gill, developer of ArgyllCMS:

TL;DR: It doesn’t seem like the i1 Display Pro is at all threatened in a technical sense.

It's a lot more accurate than the 1idisplay i'v used for years. I'v seen this link being touted several times and still doesn't change my experience on the hardware i have used it on.

Viktor have you tested both? I have the Elite since release and have had X-rite for the past 15 years on everything from WA display from NEC/Eizo to CDP and Imac's. So I don't need to parrot what someone else tested, since it works perfectly fine on my hardware, better so than the current i1pro.

Now if you have tested it and come to another conclusion on your hardware, please do share, but touting data from a forum is as useful as quoting MTF charts when discussing lenses.

i guss you use Datacolor´s software to? :P

i have had spyder 3 elit.. then i hade the x-rite color monki photo. now i have the i1display pro.. do a calibration report with displaycal. i1display pro vs SpyderX and you will se what is accurate..

So you haven't actually tested the product in question, but like to parrot someone else's data, got it.

You might want to answer before dropping more questions.

and you have no proof that it is better then the i1display pro they have.. ;) You might want proof before you say its accurate ...:)

Well unlike you I have actually tested the products on various hardware for real use and compared it. I don't need to prove anything since it works as advertised on my hardware.

Out of curiosity, have you done any sort of objective testing, or are you just eyeballing it?

Very timely. I just went through the same panic of trying to restore a default color profile on Windows last week. In the end I figured it out that when my laptop and external monitor were set to Duplicate displays, it was using the laptop color profile on the monitor. There doesn’t seem to be a way to make it segregated with my Dell while duplicating, but at least I figured out the problem and now my monitor is accurate and Dell is wonky which is good enough.

I had the old Spyder, which I wasn't very happy with. It was also limiting to only the one monitor (cheaper version profile limited) and couldn't calibrate for prints. I also sent a complaint in to them that the colors were off after calibrating, which they responded to but nothing much changed.

I changed to Color Monkey and have been perfectly happy with all my results, monitors and prints.

Not saying that the new Spyder model hasn't been improved, I myself would be skeptical of using them again after past experiences.

If your imaging business requires dealing with an external printer, you need to use the same calibration systems as they do if you want to have as accurate a reproduction chain as possible. Most of the industry is xRite-based, but there are other, sometimes proprietary systems and hardware you may need to look into.

Target colorspace is important also. Not all printers use US SWOP 2. A printer I deal with uses Gracol 2015. Make sure you have the proper ICC profiles to convert data.

Speaking of colorspace, if you're dealing with images that are going to web, DON'T shoot and process your files in Adobe RGB. You need to shoot and process in sRGB. You're only fighting yourself to try and achieve proper results. Adobe RGB is a useless colorspace. It doesn't exist anywhere in the "real" world of web and press. If you need more computational accuracy, work in 16 bits/channel.

It's fairly easy and inexpensive to purchase a monitor that can display 100% of sRGB, and pretty much any calibrator will help you get the most out of it. You need to be smart when dealing with the target mediums your product is destined for.

You touch on something that I always had doubts on, and that is the primary colorspace to work in. My belief was to always work in Adobe RGB, and when all is finished, your final export is converted to sRGB. I have had issues with this in how the final color is converted at times, but never really 100% happy with what comes out. I also have had the belief to get the best prints, I would need to print from the Adobe RGB file to get the best results.

I never really gave much thought about working in the sRGB workspace because of the smaller range color gamut, but this is an interesting thought.
At the very least, my next project when I have time is to try and compare different software on how they handle the final conversion from Adobe RGB to sRGB.

My understanding of this monitor is that it comes calibrated to somewhere around 98% of sRGB.
"Wide Gamut" monitor was mentioned during the setup. Can someone explain to a rookie what this means and why he selected Wide Gamut?

It would be great if you followed this up with a print to see how it compares with the monitor.

Being involved into color management as a tester back in the 90's and got involved with measurement devices in the printing industry I must say that I really totally dissagree with the statements made in this video. If you don't understand light and color, the way they are indepedently interact towards and with each other and don't show knowledge how our minds work in color vision and such... you simply can't recommend a tri-stimulus calibrator.

I owned a service bureau for 18 years. We fought color calibration the whole time. There wasn't much to choose from then, X-Rite was the standby. Calibrating your screen is only part of the issue. Understanding ink density, color space and the needs of multiple output devices is essential. While there appear to be some industry standards, they don't seem to mean much to some designers and artists. I will say things are better now then they were even 10 years ago. I have an ASUS 4K monitor on an Nvidia card. Using simple software calibration, I have managed to match up with a couple of service bureaus, two newspapers and several printing companies and publications. The key is to understand and deliver according to the parameters required by each.

I love the Spyder5PRO and perhaps I will upgrade but not until Windows 10 version 1903 build fixed the issue of not being able to save applied custom color profiles.

I wonder how many photographers have been bitten by Microsoft®