Review of the Elinchrom ELM8 After Four Months of Use

Elinchrom focus has mostly been on light shapers and strobes ever since they've existed. However, the ELM8 they released last year may be a hint they are serious about getting into continuous light. After four months of use, here's my opinion on the Elinchrom ELM8.

Before getting into the goods and bads of the ELM8, a bit of background may help better understand the product and the following review. The continuous light offered by Elinchrom was developed in partnership with Light & Motion. You may also find the same product, the ELM8, sold under the Light & Motion brand as the CLX8. Why do we care as users that two companies designed the product? Because it gives us access to more accessories and options. As you'll see later in this article, it's rather a good thing!

The ELM8 feels very sturdy in hand, looks beautiful, and is quite small – especially considering how powerful it is. If my words aren't enough, it's IP54 rating may convince you. While it may not be the highest rating we've ever seen for a continuous light, it's still quite good – limited protection against dust ingress and protected against splash water from any direction. In more understandable words, you can use it under the rain without having to think twice. Adding to the overall feeling of robustness, the battery is not removable. In practice, I haven't found it to be an issue at all. I haven't had a situation in which I wished I could have swapped the battery. Even if I had, I could have used an adapter to power it with V-mount batteries through D-tap. A full charge will last 50-60 minutes in continuous use at full power (8,000 lumens) or a little over four hours at minimum power (2,000 lumens). 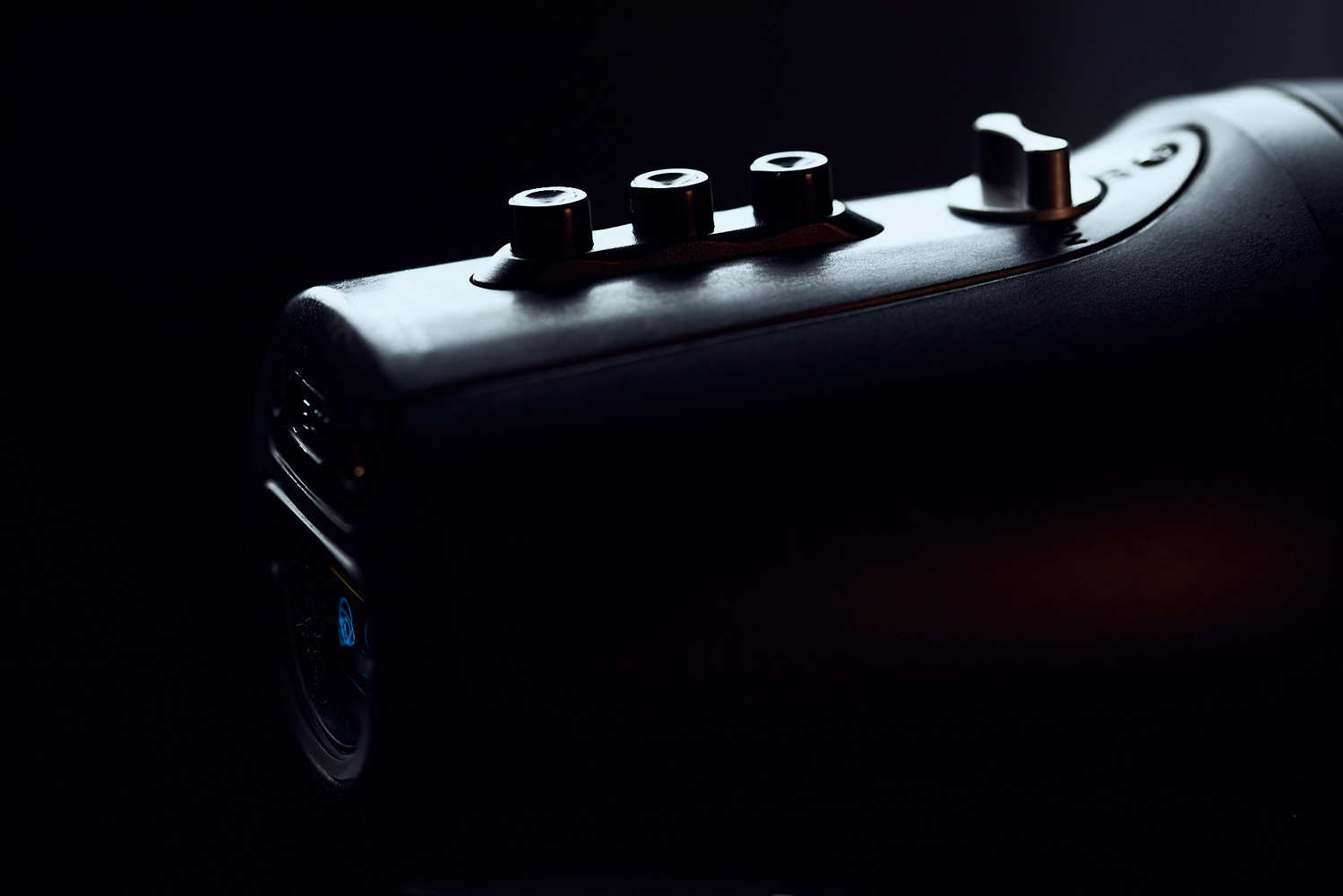 The button layout is straightforward. It's made of a turning knob to switch on and off the unit, two buttons to adjust the settings as well as the power, and a menu button. That's all you'll find and all you'll need. These buttons are located on the top of the unit, while the rear of the ELM8 has a little LCD screen that displays settings, power, battery life, and the status of the Skyport signal. The user interface couldn't be much easier, to be honest, and that's something I highly appreciate. The user guide wasn't necessary to get started, which tells a lot about how user-friendly a product is. 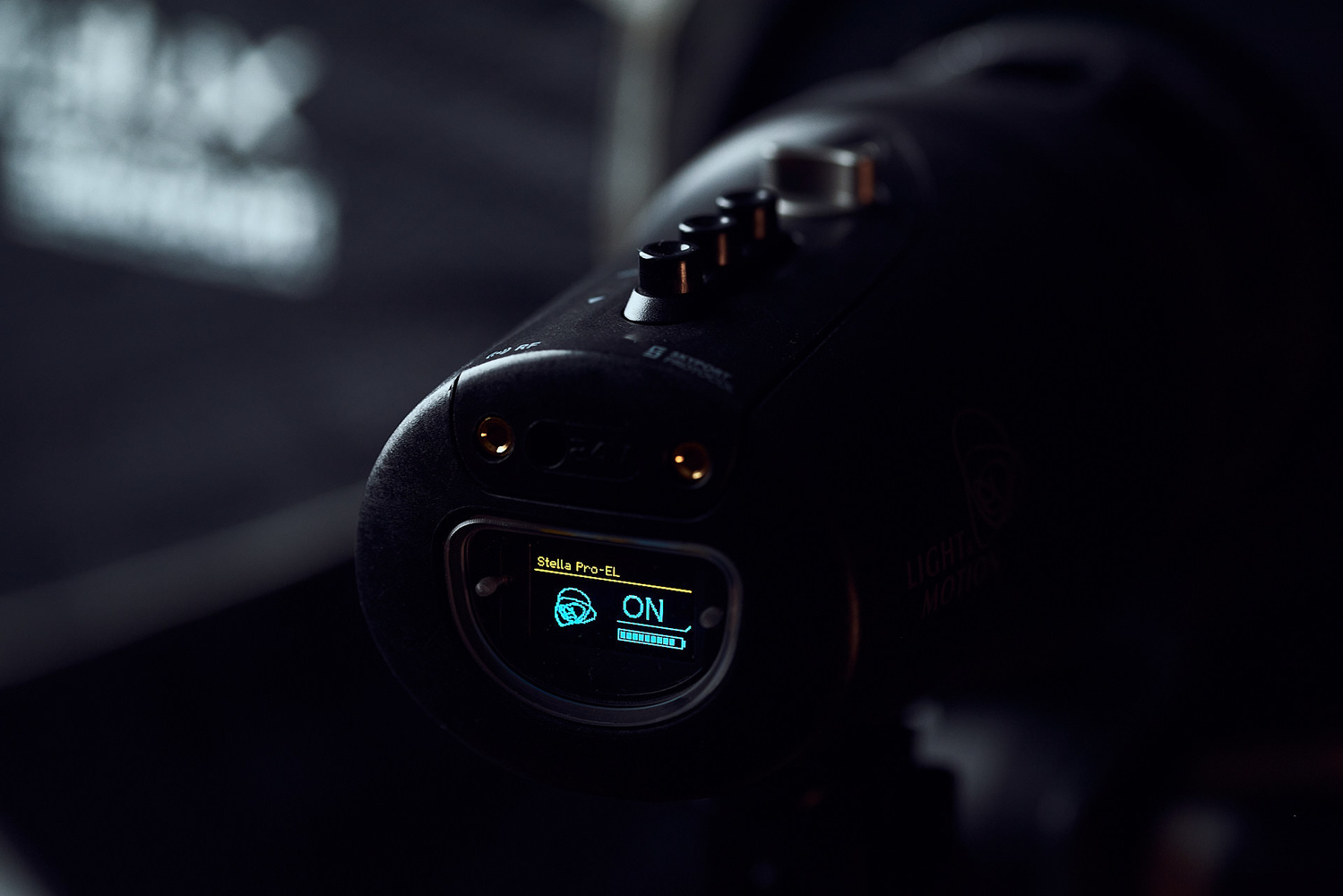 The front part of the ELM8 looks like a substantial thermic dissipator, and it probably is. However, don't be fooled, while you may think this will be enough to cool down the very powerful LED and electronic components behind it, well, it's not. There's still a fan in the light, and it'll kick in when you increase the power. At full power, the fan will almost always be on. The noise is minimal, but still, it may bother some videographers when recording audio.

Although the part that attaches to a light stand can double up as a handle, I wish it could be swapped out for a real handle to make an assistant job easier. There's another issue I have with this handle, but I'll get back to it when we talk about the light shapers.

One exciting fact about how the unit is designed is its modular LED. The LED can be taken off the unit and be replaced by another. So you can go from a 5600K LED (the default one) to a 3200K (available for $399.99) within seconds! This avoids any issues you could encounter using gels and also offers you more powerful LEDs. I wish more manufacturers would do the same. Plus, in terms of durability, although LEDs last usually a long time, it's great to know you can just change the LED if it dies instead of having to buy a whole new unit.

The most exciting feature of this product to me is, without a doubt, its compatibility with the Elinchrom's incredible line of light shapers. Thanks to the Q-mount, the Portalite softboxes, and the 18cm Q-Reflector can be mounted directly onto the ELM8. Using the Q-Reflector Adapter MK-II, any other Elinchrom light modifier can also be fitted easily. It's a massive benefit for Elinchrom users, as it removes the need of having to change the speed ring of a light modifier before using it on continuous lights or buy some accessories twice with different mounts. 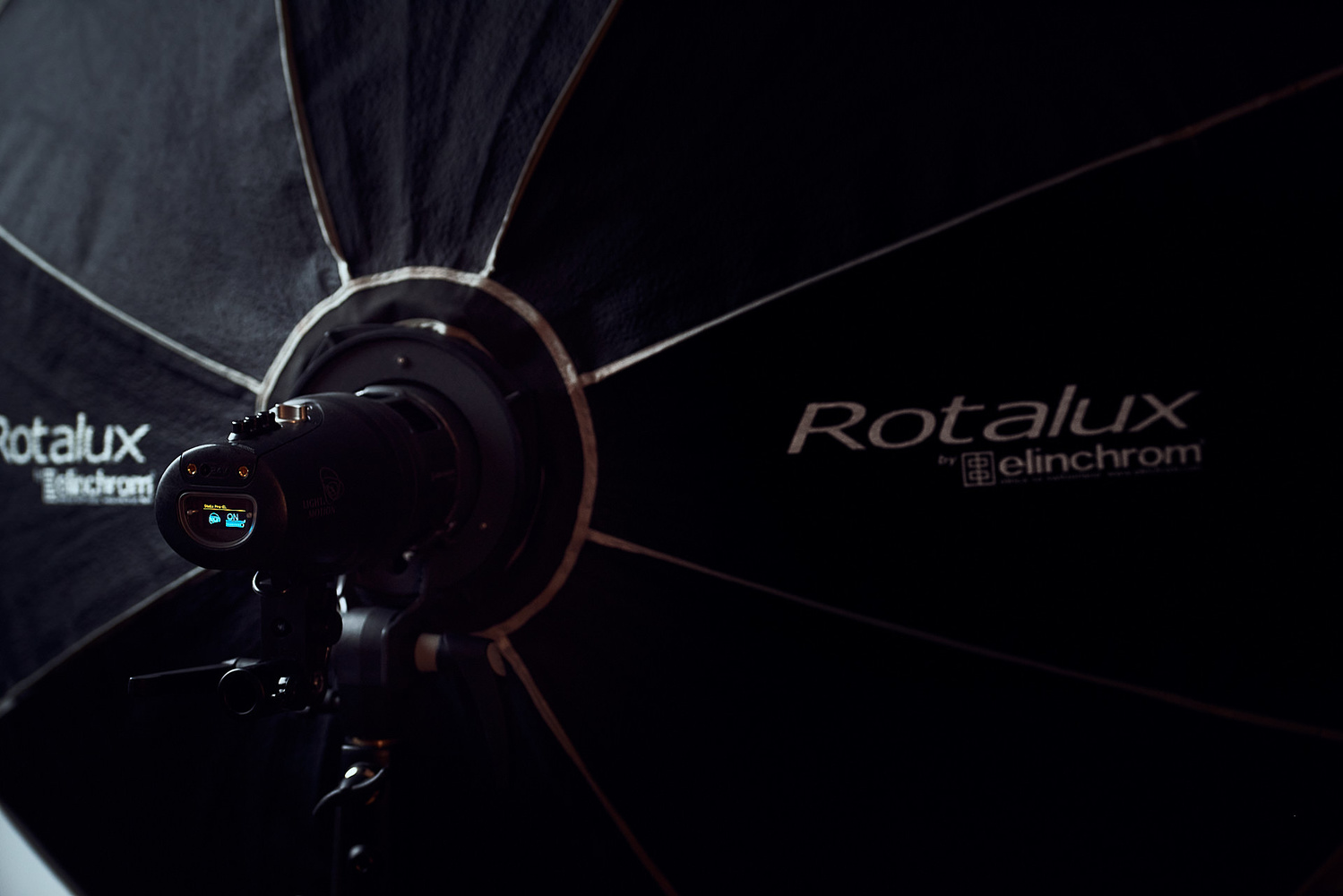 There is, however, one drawback regarding the way softboxes and other dishes mounts onto the ELM8: deflectors can't be used. I won't go into details as to what a deflector is here, but so that you know, it's unique to the Elinchrom system and can substantially limit the hotspot of any softbox or transform an octa in a large beauty dish. It's something I love to use with my Deep Octa 39" and necessary on the Softlite, so it becomes a beauty dish. Unfortunately, the umbrella mount of the ELM8 is not well placed on the handle for the deflector to stay in place. So keep this in mind if you want to use a beauty dish or any other light modifier with a deflector on the ELM8. With that said, aside from this small design issue, the integration with the Elinchrom light shapers is seamless.

For wedding photographers, the ELM8, with its integration into the Elinchrom system, can prove to be a desirable solution if you need a continuous light with more power than the ELB500's LED. Photographers who are already equipped with Elinchrom light modifiers and have to shoot short videos – corporate, interviews, or even products – the ELM8 could be quite an attractive solution! No need to buy another mount and swap the ring each time you want to go from continuous light to flash, and back. Over the past few months, I've learned to appreciate how seamlessly the ELM8 integrates within my workflow and thus how easy it made to shoot videos alongside stills on the same set.

Speaking of workflow and habits, I'm used to using my Elinchrom Transmitter Pro to adjust my strobes from my camera, so I was very excited to find out it comes with the Skyport protocol embedded. It means I don't have to use yet another remote to adjust the ELM8 power; I can use the same one I rely on for working with my Elinchrom strobes. 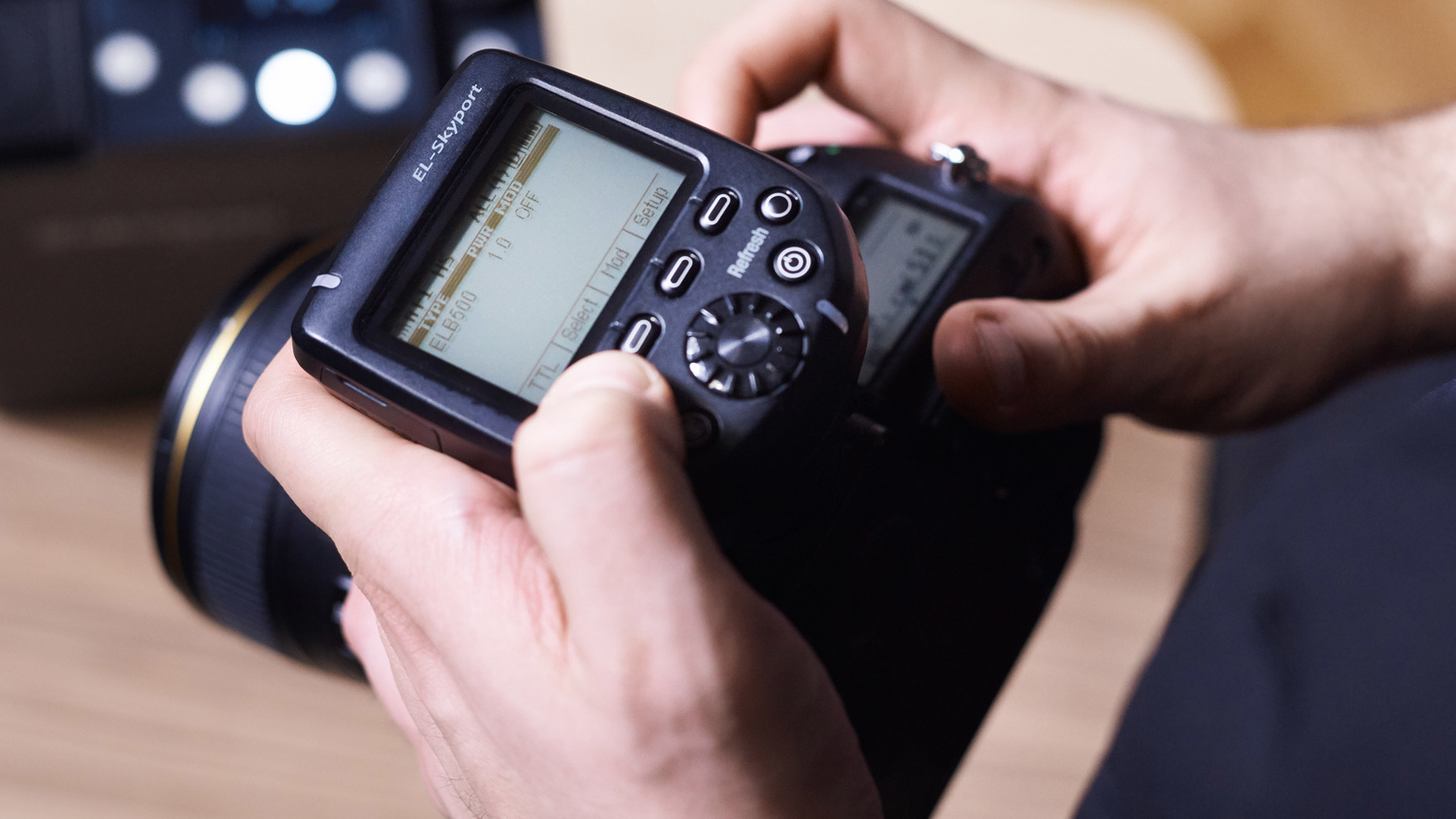 When it comes to power, as I said previously, it goes from 2,000Lm up to 8,000Lm. The power can be changed in 100Lm steps by keeping the power increase or decrease pressed. For faster adjustments, a simple tap on the same buttons will change the power by larger values.

I've talked about the Elinchrom integration, but there's another one that's quite important as well, it's with the Light and Motion accessories. As L&M manufactures the ELM8, all its light shaping tools can also be used. They may be lesser known than Elinchrom's, but they carry a decent line of accessories that are fantastic when you want to travel light. You'll find a variety of tools ranging from barn doors for improved light control to a 25° fresnel to maximize light output. I hadn't tried any of the Light & Motion accessories before, but I must admit they are well designed, and the finish is very good. The fresnel proved to be quite useful in a few scenarios but also for more creative purposes in the studio. 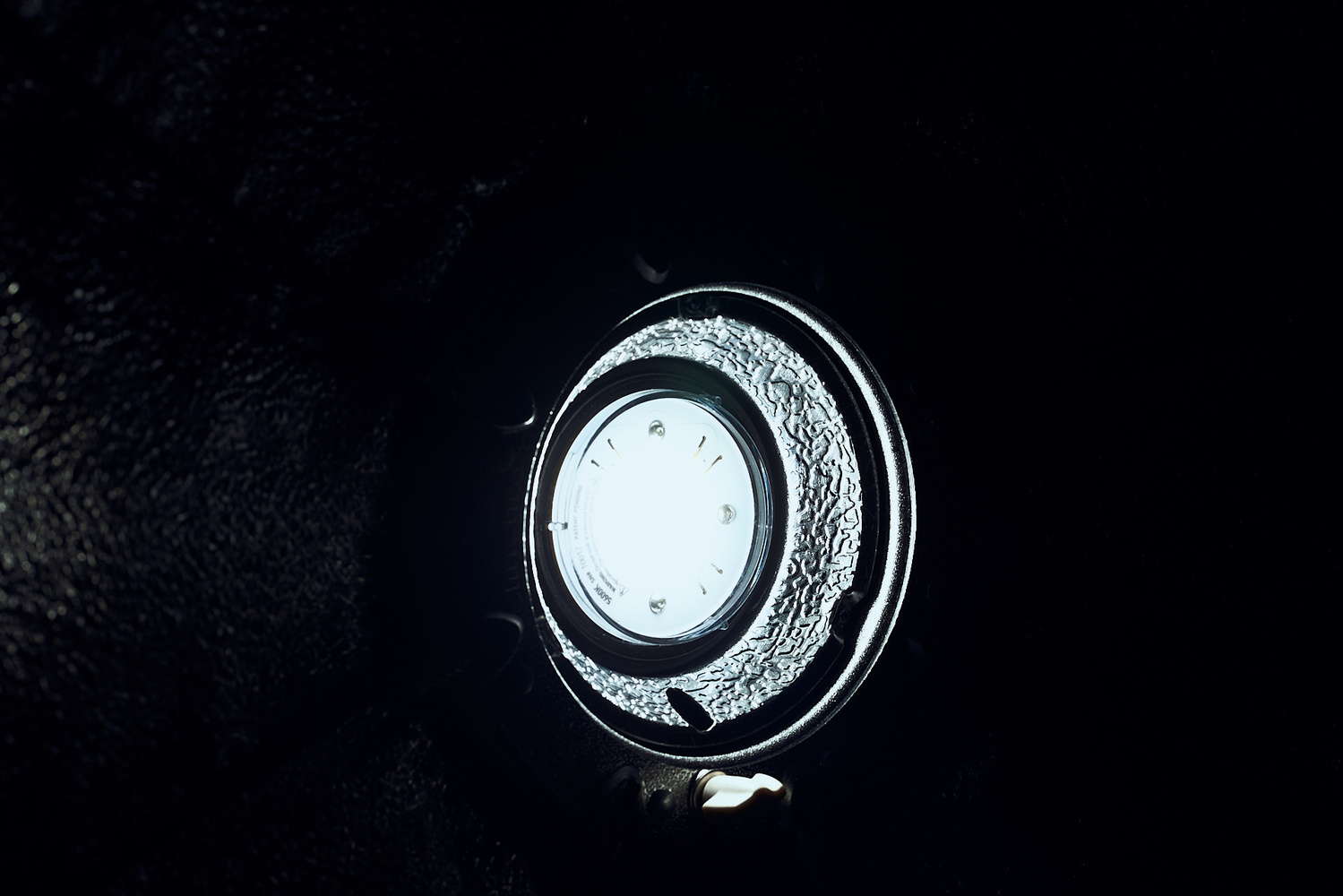 In the United States, the product is sold under the Light & Motion brand as the CLX8 and is available for $999.99. If you plan on getting accessories from Light & Motion, you should look at the Light and Action Kit bundle sold for $1,699. It comes with a wide variety of handy accessories, including the fresnel, barn doors, and more.

The Elinchrom ELM8 is an excellent product that has found its place easily among my Elinchrom's accessories and helped me work faster when shooting documentary-style images or still life. It's also a great addition to my kit when clients ask for short videos or if I want to produce behind the scenes content for self-promotion.

Looks pretty good. I love my Elinchrom modifiers, and want to start using continuous lighting for still photos, too. It's soooo much better, being able to see the light you're working with. Strobes were necessary (and for power, still are), but also an abomination. This might be the LED for me.

"Strobes were necessary (and for power, still are), but also an abomination."
What?

"It's soooo much better, being able to see the light you're working with."
I suppose if you're into blinding your subjects.

Agreed! Especially in portraits photography you'll get very small and not that good looking pupils with continuous lights.
Besides: It will never really replace a strobe because of the much lesser light output. Cannot imagine how to overpower the sun with a continuous light.

Without frying your subject lol.

I would have liked better images of the light itself....hard to tell what the actual form factor is from the include photos.