Not long ago, I released a review of Sigma's newest Art-series lens, the 20mm f/1.4 Art. Unfortunately, Northern California skies have had bit of a tough time clearing up despite numerous requests from astrophotographers below, patiently waiting for news of this lens' nighttime, Milky Way performance. Last night, although far from perfect, areas of the sky did clear up enough to get a small consensus on how this lens fares when pointed toward the stars.

Although hard to tell with the naked eye, the sky still had plenty of haze in it. This meant my exposures brightened up with plenty of "noise" from light pollution in the area that was so lovingly held in the sky for me. Still, it was clear enough to see some stars, which meant it was clear enough for our first coma tests with the Sigma 20mm f/1.4 Art. That's all I'll say about the weather, so just remember that when looking at these. This is all just look into various types of distortion in stars at night at apertures f/1.4, f/2, f/2.8, and f/4. I won't say much except to fill in the basics. You can all determine the results and form your own judgments, here. Ready, set, go!

I don't have any side-by-side comparisons, but reading and examining results online, it seems that the Sigma 20mm f/1.4 Art holds up darn well. Darn well isn't gold, however, when you're comparing against a good copy of the seemingly coma-less Rokinon/Samyang/[insert one of a number of brand names here] 14mm f/2.8. But without having one with me to test, and with a few relatively quantitative measurements, I can say the Sigma should please all astrophotographers.

There is visible evidence of coma (comatic aberration) and astigmatism, but both are controlled quite well, especially when considering how wide this lens opens up. For some kind of quantitative measurement, we'll use The Lonely Speck's method of dividing the pixel length of these aberrations by the pixel height of the entire image to get the distance that the aberrations span as a percentage of the photograph taken (which should apply to any camera with the same sensor size).

In the image below (taken at f/1.4), both coma and astigmatism present at various lengths from 15 pixels to 25 pixels, depending on the area of the image, the brightness of the star, and the type of aberration being measured. Dividing these numbers each by 4016 (the vertical number of pixels of my D750 image), one discovers a relatively excellent range between 0.37 and 0.62 percent (The Lonely Speck considers anything below 0.4 percent as excellent, below one percent as acceptable, and above one percent as poor). Keep in mind this is at the far corners. The center of the image still displays excellent sharpness with no visible signs of any aberrations (as expected of most lenses' center-field performance). Read the captions for information about the following subsequent test images.

What you won't notice in these images is any jarring, overall feeling of "oh my god, it's everywhere" that you normally see. In this case, it's obvious we're measuring the brightest bluish star that's the only one with real signs of aberrations. In a real-world test where there is no haze or light pollution, this effect should be much more uniform. This was confirmed in quick tests I did with The Lonely Speck's downloadable test chart, which showed identical performance for every dot in every corner relative to one another.

If anything, the test chart images showed roughly a 10- to 20-percent improvement which I might chalk up to the lack of atmosphere to further distribute light. Maybe that's a stretch, but the point is, the results are uniform in the corners and repeatable in two completely different types of tests. Moreover, those tests allowed me to more easily discern that the maximum aberrations did in fact reach no more than about 0.62 percent when going just a few pixels in from the corners.

I do apologize for the imperfect sky, but I promise it's the best one we've had to date. In any case, the two tests still back each other up, and performance overall is still excellent. Below are crops from the centers of these images. You can all make your own judgments after one note: remember there was significant haze. Because of this, even the untouched image saved as a JPEG doesn't look great with the added noise reducing the presence of those nice, deep blacks we like to see. Therefore, the overall sharpness isn't going to look great, either. For reference, all crops are 700 pixels wide and 467 pixels tall.

For reference as to vignetting, below are the full images.

So, what do you all think? Worth it?

I didn't want to start the whole ISO talk, partly because it was so hazy that it's not really worth it. But, for those interested, here's a quick unedited and curves/saturation/sharpening/NR-adjusted image at ISO 800, f/1.4, four seconds. 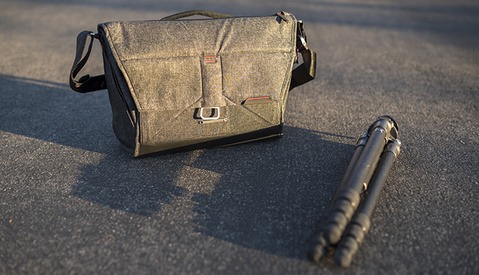 Gear / November 24, 2015
Hands-On with the Everyday Messenger: The Bag That Raised Nearly $5 Million 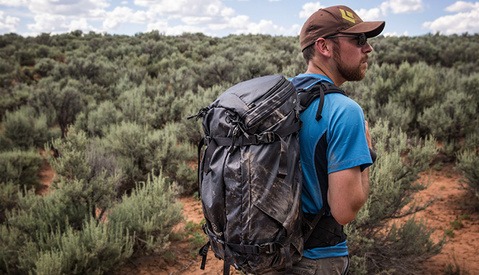 Looks good to me

Thanks for the review. I do shoot some night sky photography and intend to shoot more. My interest in this lens is not to shoot at 1 second, but rather to shoot at ISO 400 or 800 rather than ISO 3200. I have the Rokinon 14mm f2.8 and Canon 16-35mm f2.8, both of which do Ok. Shooting with cleaner ISOs with less distortion (both are a little rough around the edges) would be the benefit.
A very minor point. I have always referred to the color shift as Chromatic Aberration or CA. But lately I have seen many places where it is referred to as Coma. I even looked at the check mark in Lightroom and it is Chromatic (I guess the abbreviation would be Chroma). I guess it doesn't really matter, but it's interesting.
Thanks for the report.

Thanks for the response.

First, yes, I would want to shoot at ISO 800, too. I tried it for these tests, but there was so much haze that it just didn't make sense. I wasn't getting anything more from it, so I decided not to make this about ISO, but instead about plain, simple optical performance.

Second, coma is different than chromatic aberration. It's a common lens "defect" that is simply hard to control at the corners, particularly in very wide-angle lenses. It results in a comet-like flare of light coming from pinpoint light sources. There is generally little to no color shift associated with this... This article by The Lonely Speck shows plenty of great examples (I read it a while ago and have also seen it quoted numerous times -- to me as well): http://www.lonelyspeck.com/a-practical-guide-to-lens-aberrations-and-the...

Hope that helps! And as a side note, chromatic aberration is almost nil with this lens, in case that's of interest to you. I mention that briefly in a caption in the original review (I think :-)).

Mike, I didn't know about this either. Last fall I took my first Milky Way images and I was not very happy.
I found this article at Lonely Speck that explains very well the lens deficiencies found when shooting one point light sources. It is very interesting because you would never see it unless you are dealing with stars. Even Expensive Nikon or Canon lenses can fail when shooting stars and some lens expensive lenses have proven stellar results.
I hope you find it informative:
http://www.lonelyspeck.com/a-practical-guide-to-lens-aberrations-and-the...

I stand corrected. Thanks for clearing that up.

I would say the Sigma is a better lens for MOST USES, just not yet for astrophotography.

I found a video on Youtube that also confirms the disappointing results for stars shooters:https://www.youtube.com/watch?v=gQ2gewshUrgUnfortunately, there is no audio

It is very sad since this was a hugely anticipated lens for Milky Way shooters, since the wider lens with a maximum aperture of 1.4 was the 24mm from Ronikon. It seems that the additional 4 mm would have made a big difference to capture more scene in just one shot.

Compared to the 24mm Rokinon, you're right. That thing is just incredible, it seems. But simply going by general opinions by The Lonely Speck in comparison to other lenses, the Sigma 20mm f/1.4 does technically "measure up." It's just not completely lacking in coma....unfortunate as that may be...

I agree. There are always compromises. The Sigma will take fantastic pictures in most situations; the Rokinon is mainly used for astrophotography because is a manual lens. So astrophotographers probably will pick that one up first. Your first blog showed amazing pictures for weddings with this lens. I would say that a photographer like myself that seldom takes pictures of the Milky Way would probably chose the Sigma because its versatility. If they had included more spherical elements to correct for coma this lens would have been one of the most popular lenses ever because it would appeal to landscape, wedding, journalist and astrophotographers. Maybe the next version?
It would be fantastic to have a side-by-side comparison for coma at the maximum aperture (where the problem is more evident) of several of the most popular ultra-wide lenses; including this new Sigma 20mm 1.4

Well I got Sigma 35mm 1.4 and 20mm 1.4 for my d810,first they had heavy front focus specially from 1 meter distance and more.After Lens Align system calibration I have very nice sharp images when I focus in a subject which is less than a meter away but more than a meter or 2 is very soft which I expected from a prime lens to be more sharp! I have send my body to Nikon NPS and they checked and said camera is in order and they have checked with Nikon wide angle lenses and focusing is right in body!
I have to check with other friends who has same lens and body or bring it to Sigma to check further!
Any idea or same problem?!

I've read that the Rokinon 24mm f/1.4 has less coma because it is softer--not as sharp-- than the Sigma 20mm f/1.4. In my experience, this is the case. I've tried 2 Rokinons and didn't like either because of that softness. Ian at Lonely Speck agreed that softness reduces coma. He said that softness greatly lessens at f/2.8. But that reduces the appeal of the Rokinon, and it is still not super sharp at f/2.8.. I guess it is a decision between softness and having to do a 3x3 panorama with the Sigma 20mm f/1.4 to get rid of the comatic corners. I'm still searching for the perfect astrophotography lens. Sigh.

This or Sigma 24mm or Canon 24mm?
Obviously the 24mm's has the advantage of fitting normal filters, but what about astro quality?