The Stranded Photographer: Making the Most of an Unexpected Stay in Arizona

Every day it seems like there’s a new unpredictable and intense weather phenomenon on the horizon — state-wide wildfires, raging storms causing massive flooding, polar vortexes, and my recent favorite: the bomb cyclone. Since weather-wise it seems like we’ve finally reached the end-times, it's a good idea to remember that any quick trip you take might suddenly get prolonged unexpectedly and significantly. Such was the case for my recent four, then five, then seven-day trip to Arizona. Fortunately, I had my small travel photography kit with me — as any self-respecting photographer should — and I was able to make the most of my extended stay. Whether you’re a hobbyist or a pro, here are some things to consider when you next venture away from home.

I always bring my camera, one or two lenses, two batteries, a charger, and a couple of memory cards on short trips — even if I don’t intend to go shooting. You never know when an opportunity for a great shot will arise, so make the room for it in your luggage. For my recent exile in Arizona, I had my Canon 7D Mark ii and my Sigma 18-300mm f/3.5-6.3. Sometimes I’ll carry additional lenses, but a versatile lens can spare you the weight while giving you lots of flexibility. Even with such a minimal kit, you’ll be ready to shoot and explore when the rivers run red and frogs rain down from the sky. 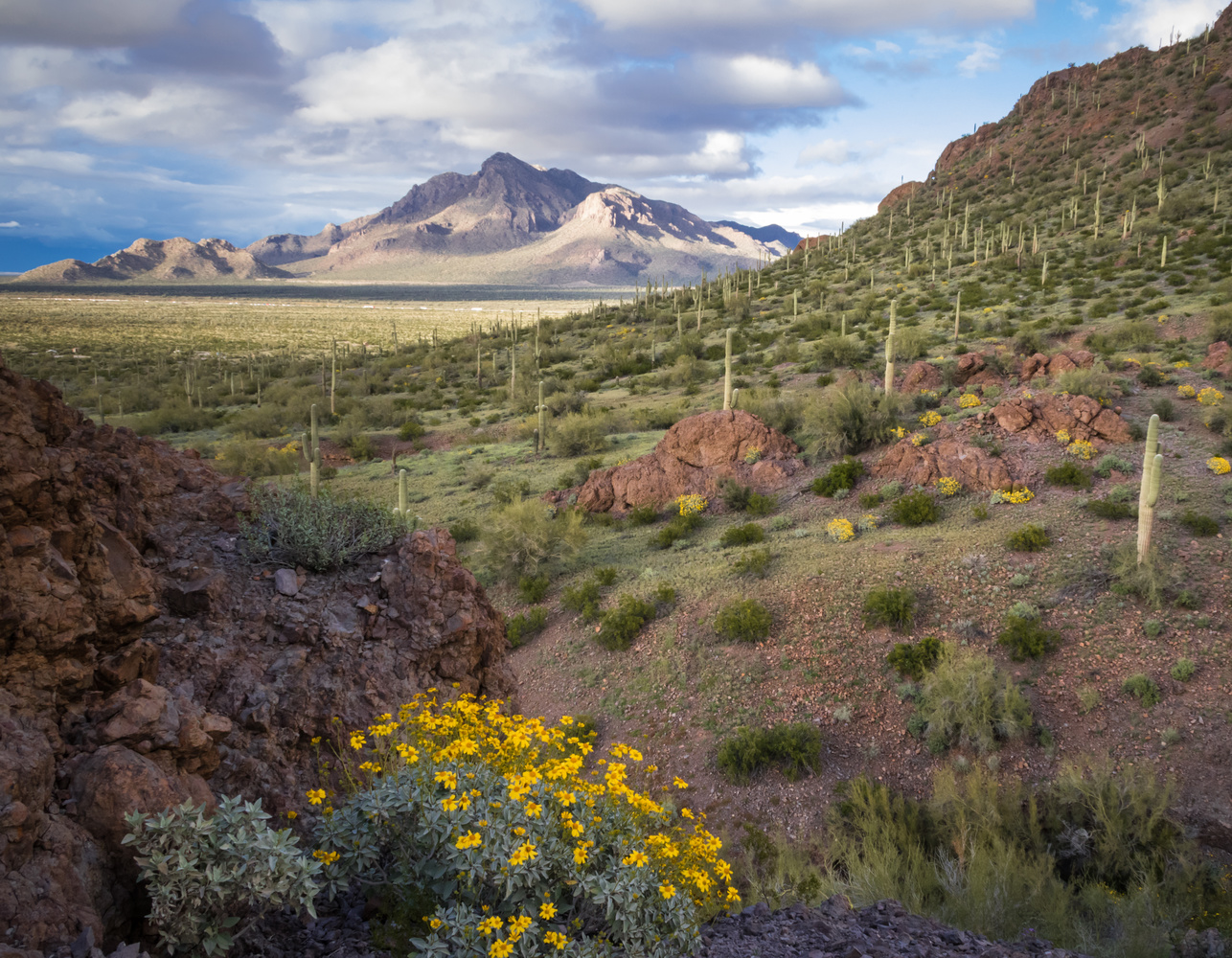 Arizona is a photographic wonderland. There are much worse places to be stranded!

When crazy weather is in the forecast, there’s always that will-they won't-they speculation about the airline canceling your flight. Try to reschedule your flight too soon and you get stuck with change fees. Wait until they officially cancel the flight and you’re at the back of the line for re-booking with all the other meteorological refugees. My experience was the latter. By the time I received a callback from American Airlines, my options were limited and I had a few extra days to kill. Fortunately, I already had a plan.

As soon as it seemed that my flight back to Denver was in jeopardy, I started scouring Google maps for unique photo locations within reasonable driving distance. Fortunately, I already had a rental car locked in at a decent rate with Expedia and they make it really easy to extend your rental period. One quick phone call and I was a desert-exploring road warrior. Now is the time to note, when I picked up my rental (a very fuel efficient and sensible Volkswagen Jetta) I was offered a sexy muscle car for a small daily increase. Don’t let the flashiness lure you. If I’d chosen a mid-life-crisis-mobile I would have had a much more expensive impromptu vacation and I would have felt less confident driving through parks on dirt roads. A Jetta is hardly an off-road vehicle, but it’s much better equipped for unexpected adventuring than other options I had.

Next up, housing. The first portion of my trip was to Phoenix, but at $250+ a night for the saddest of motel rooms with a questionable, sodium-laden breakfast buffet, and coffee with a side of floating grease, I stayed there only as long as I needed to before ducking down to the more reasonably priced and photographically interesting Tucson. I had originally planned to spend one night in Tucson to meet up with a photographer friend, but when plans changed it was a no-brainer to keep the party going down there. When I travel solo, I often stay in female-hosted Airbnb. A well-chosen Airbnb is generally a better value and female-owned properties feel less sketchy for a female traveler. Can women be axe-murderers too? Absolutely. The future is female, though it feels less likely somehow. Extending my Airbnb was no problem at all. Airbnb makes it really easy for hosts to extend their guests’ stays. Two messages and a tap or two in the app and I was set with a nice place to stay. If you had been staying in a hotel and your plans get extended, Airbnb is generally your best option for keeping costs under control.

The sky’s the limit here, folks. I was lucky to be stranded in a place as epic as Arizona, but even if you’re in less flashy states like Ohio or Delaware (I’ve had great photographic adventures in both), there are always going to be state parks and wildlife refuges to explore. With a quick perusal of Google Maps or a general internet search, you’ll be on track to make the most of your unexpected stranding. Try to avoid fixating on what you’re supposed to be doing back home. It’s not your fault you’re stranded — this is what they refer to in contracts as "an act of God". Go to bed early so you can catch the sunrises. Take naps in the afternoon when the light is uninspiring. Download some podcasts and commit to spending some time in the car. 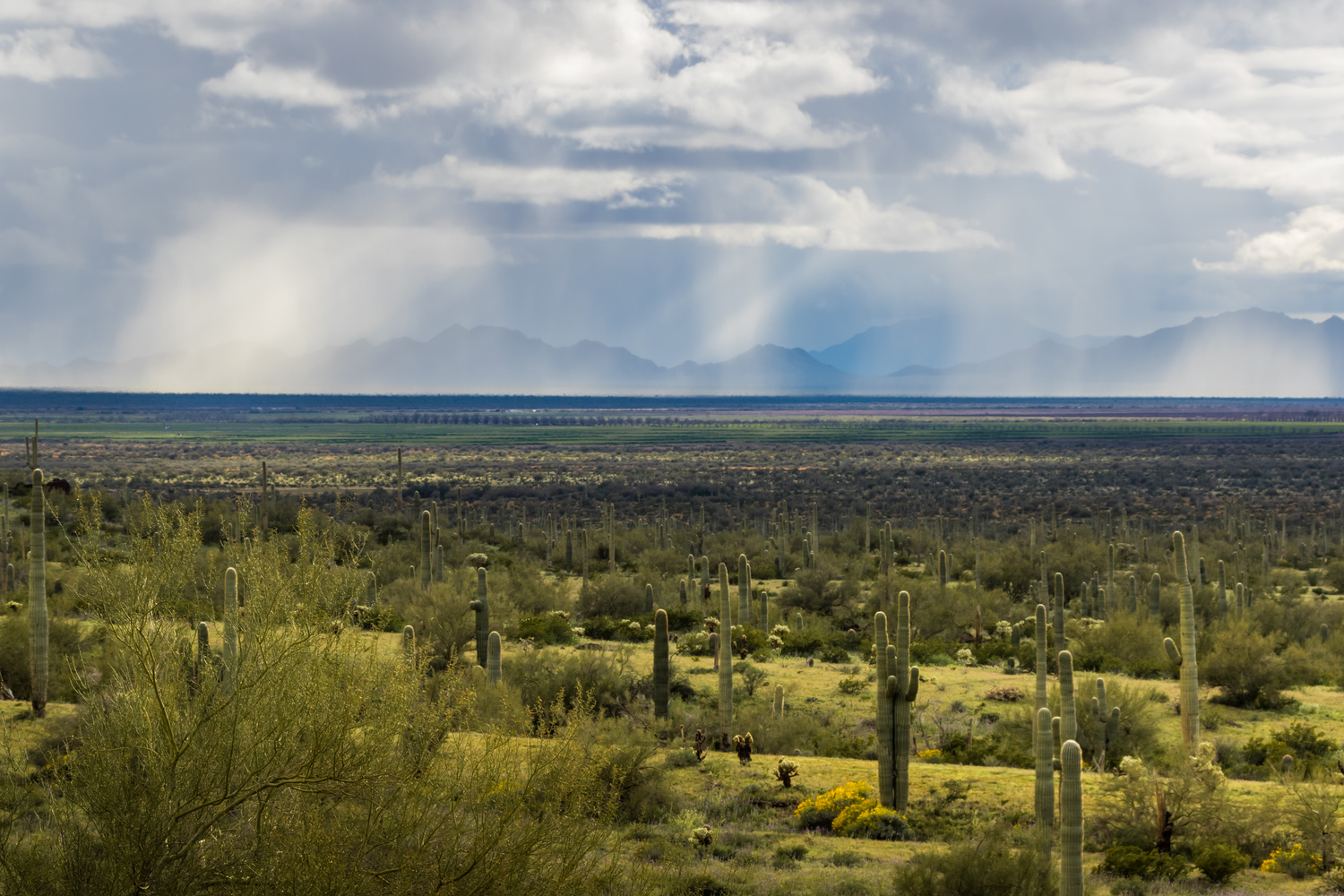 My first day in the Tucson Area I visited Picacho Peak State Park. It had been on my list for a long time, but as I drove into the park it started to pour. One of the benefits of bonus time is that you can afford to wait out some weather. While waiting for the skies to clear up a bit, I drove the various roads in the park and familiarized myself with the various lookouts and views. Everywhere I looked at Picacho Peak was a sea of wildflowers. The overarching benefit of our bizarre apocalyptic weather of late is that deserts all over the western United States are blooming.

Once the rain passed it was a photographic wonderland: confoundingly tall saguaro cacti, shrubs blooming in yellows and oranges, wild lupines, and the strong contrasty light that can add dimension to any landscape. After shooting an epic western view, I happened to turn around and discovered a massive rainbow behind me. It was a valuable reminder for my next few days in Arizona— the light and the conditions change quickly in the desert. Within an hour it went from fully overcast and gray, to sunny while raining, to unique dimensional clouds. Sunset, as I’m sure you can imagine, was epic. It was one of those fake-out sunsets where you think the color is gone and then five minutes later the sky is hot pink. Put Picacho Peak on your list. You won’t be disappointed. 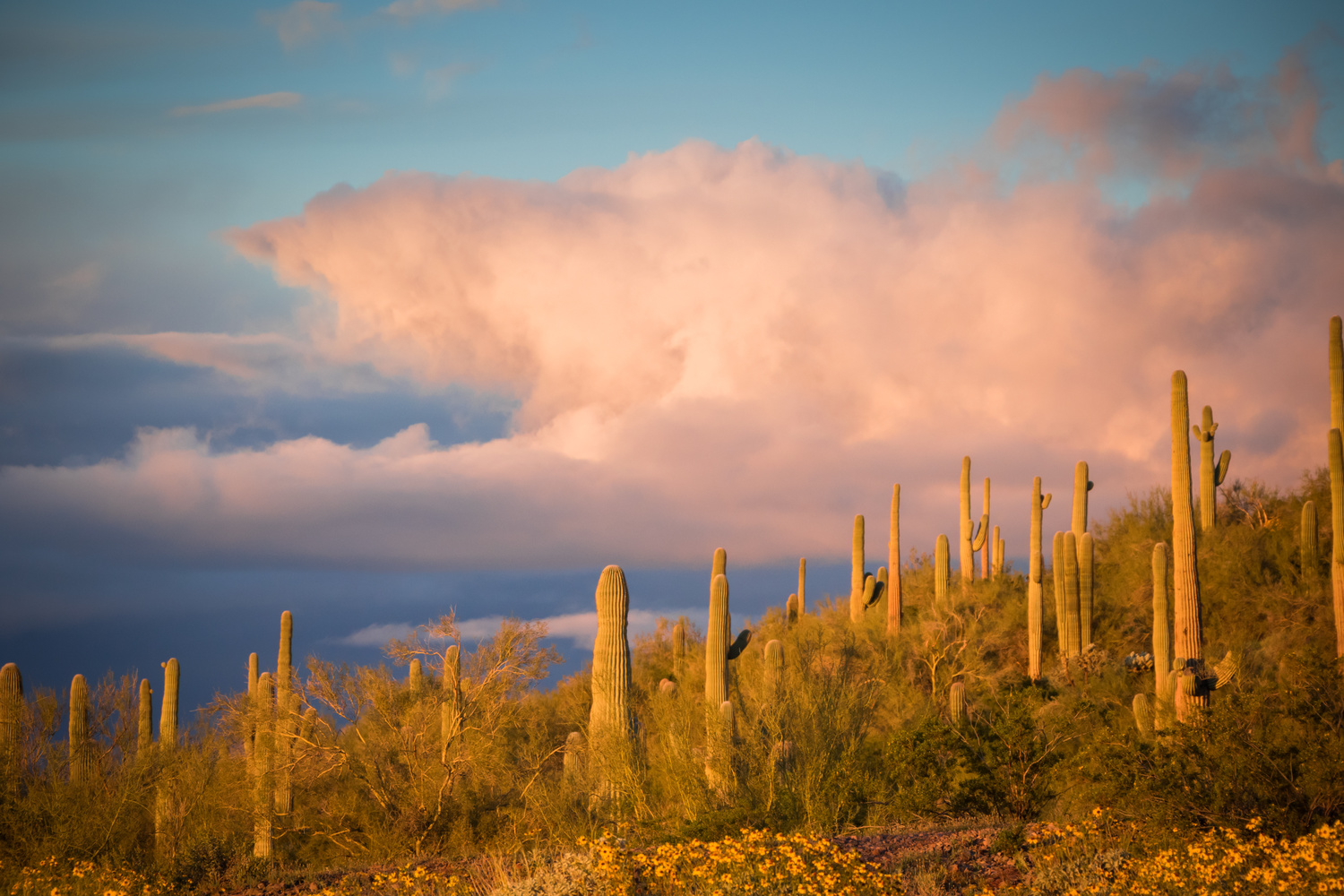 I was witness to some wild light and clouds at Picacho Peak! 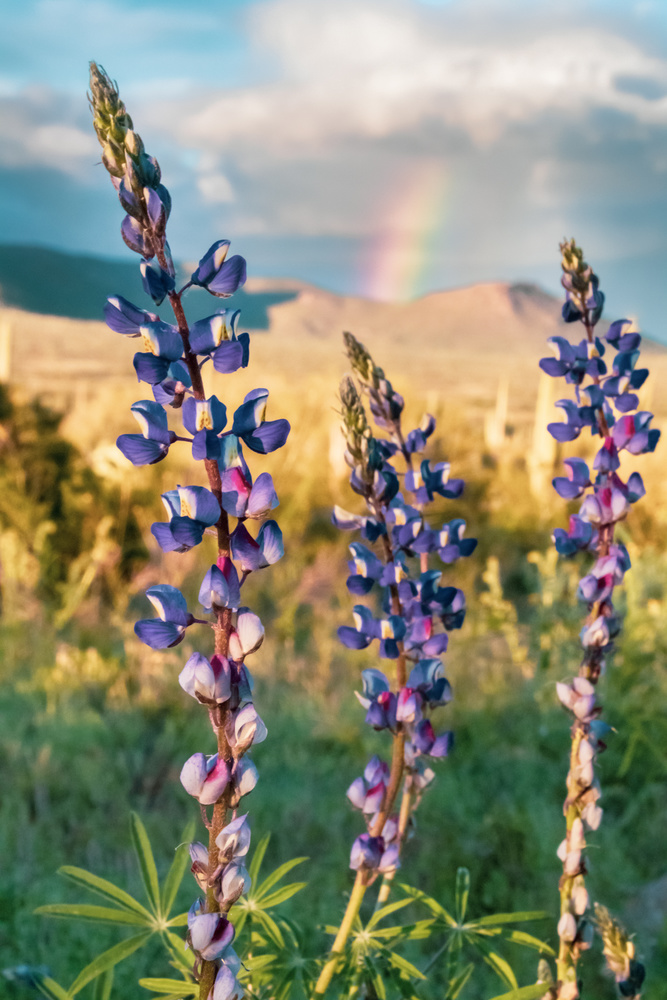 When you think the light looks incredible in front of you, remember to turn around! This rainbow was behind me for a few minutes before I discovered it.

Day two and I was ready to be impressed. I started with sunrise at Saguaro National Park. I was hoping for some wild color in the sky after the sexy sunset the night before, but no luck. I did get plenty of that fabulous contrasty light which resulted in some really nice images. It was a nice, quiet start to the day. After some coffee back at my Airbnb, I topped up the car with gas and snacks and made the trek down to Buenos Aires National Wildlife Refuge for a change of scenery. Any time you’re in a distinct type of landscape, in this case, the desert, it’s a good idea to seek out variations on that landscape. Buenos Aires features wetlands and massive swathes of tall grass prairies which not only attract 300+ species of birds but created a nice change of pace for my images. I spent the rest of day two idling along gravel roads with the windows down and my zoom lens at the ready. 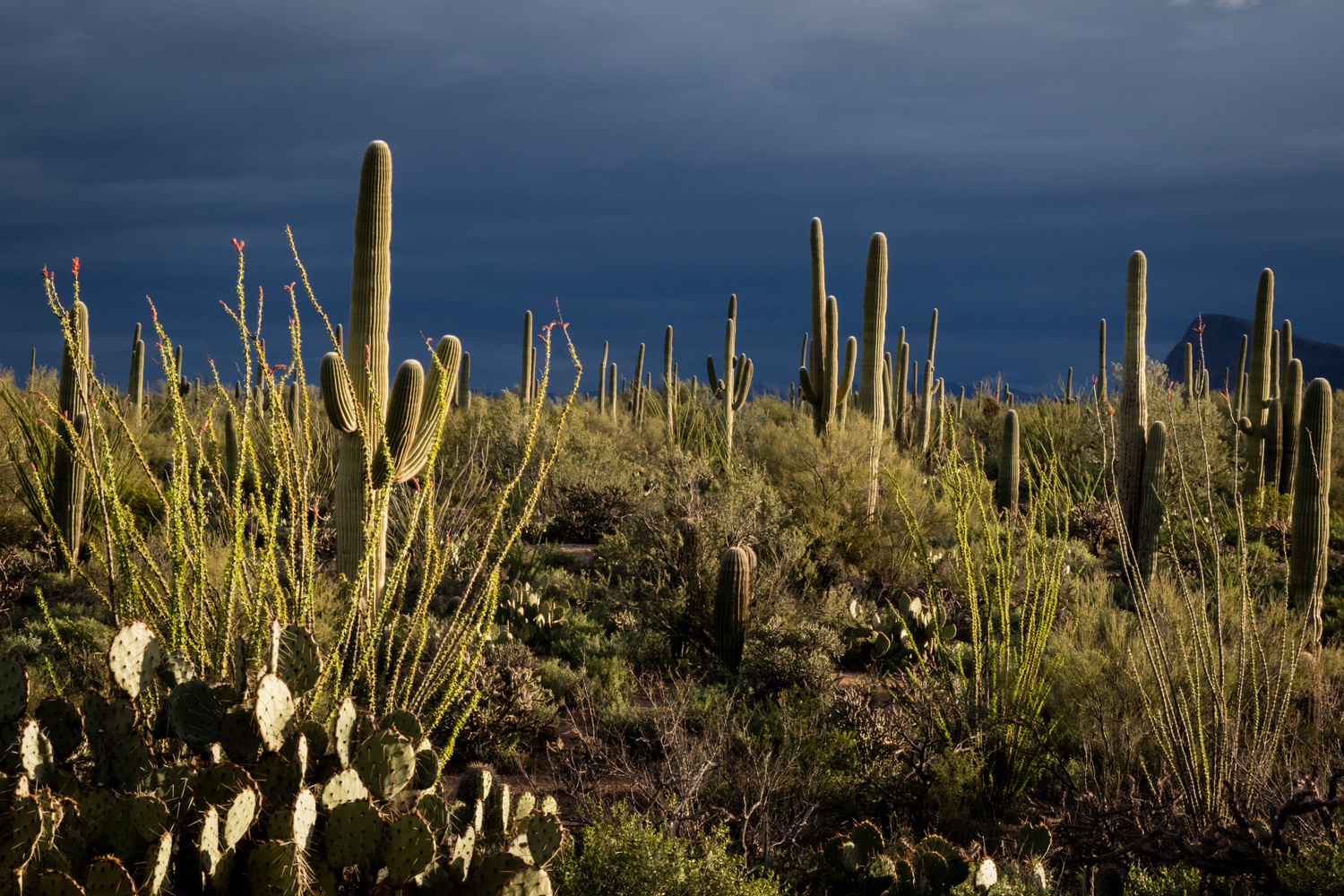 Not the best sunrise at Saguaro National Park, but gorgeous light nevertheless. 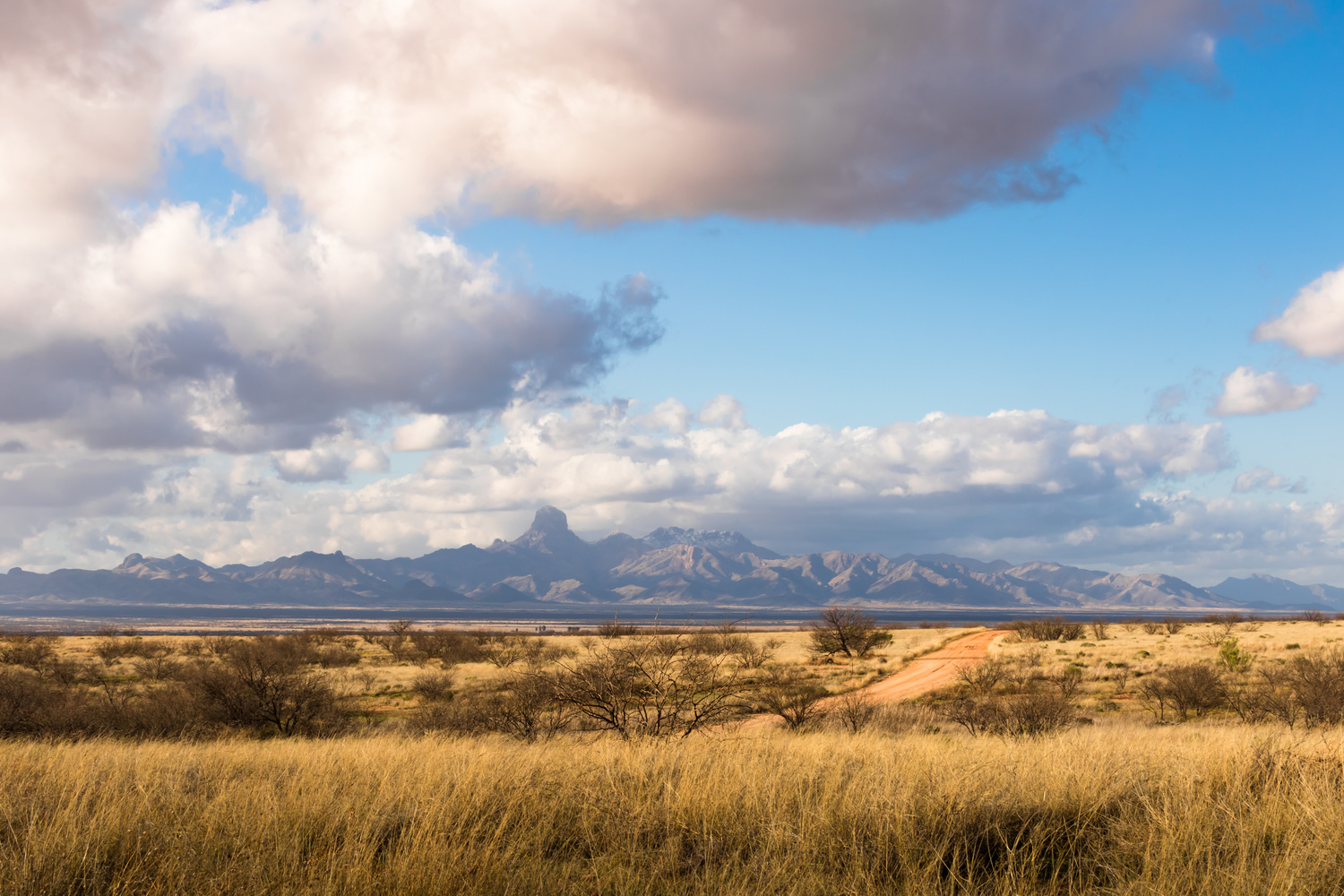 Buenos Aires National Wildlife Refuge was great for some variety in the landscape. It didn't feel like Southern Arizona at all!

For my third day, I had a more ambitious excursion in mind — Chiricahua National Monument. Just shy of two hours from Tucson, the Chiricahuas are a bizarre and unique landscape of stacked and balanced rocks formed by a volcanic eruption 27 million years ago. They are an impressive sight to behold, and a difficult location to photograph. At most times of day, the light hitting the spires is fairly flat, so while they are impressive to the eye, they lack dimension and interest in photographs. Rather than stick to the overlooks, I decided to get out and hike a bit to get closer to the rock formations and improve the perspective in my photos.

There were plenty of other visitors at the park that day. Even so, anytime I hike solo, I make plenty of noise to alert animals to my presence. After a few hours spent exploring some of the trails, I found a nice lookout and waited for some more interesting golden-hour light. As the sun began to set there were some interesting shadows among the rocks, and though the sunset itself wasn’t particularly spectacular, blue hour was beautiful in its usual way. I made a couple of stops on the journey back to Tucson to capture the soft gradients in the sky. 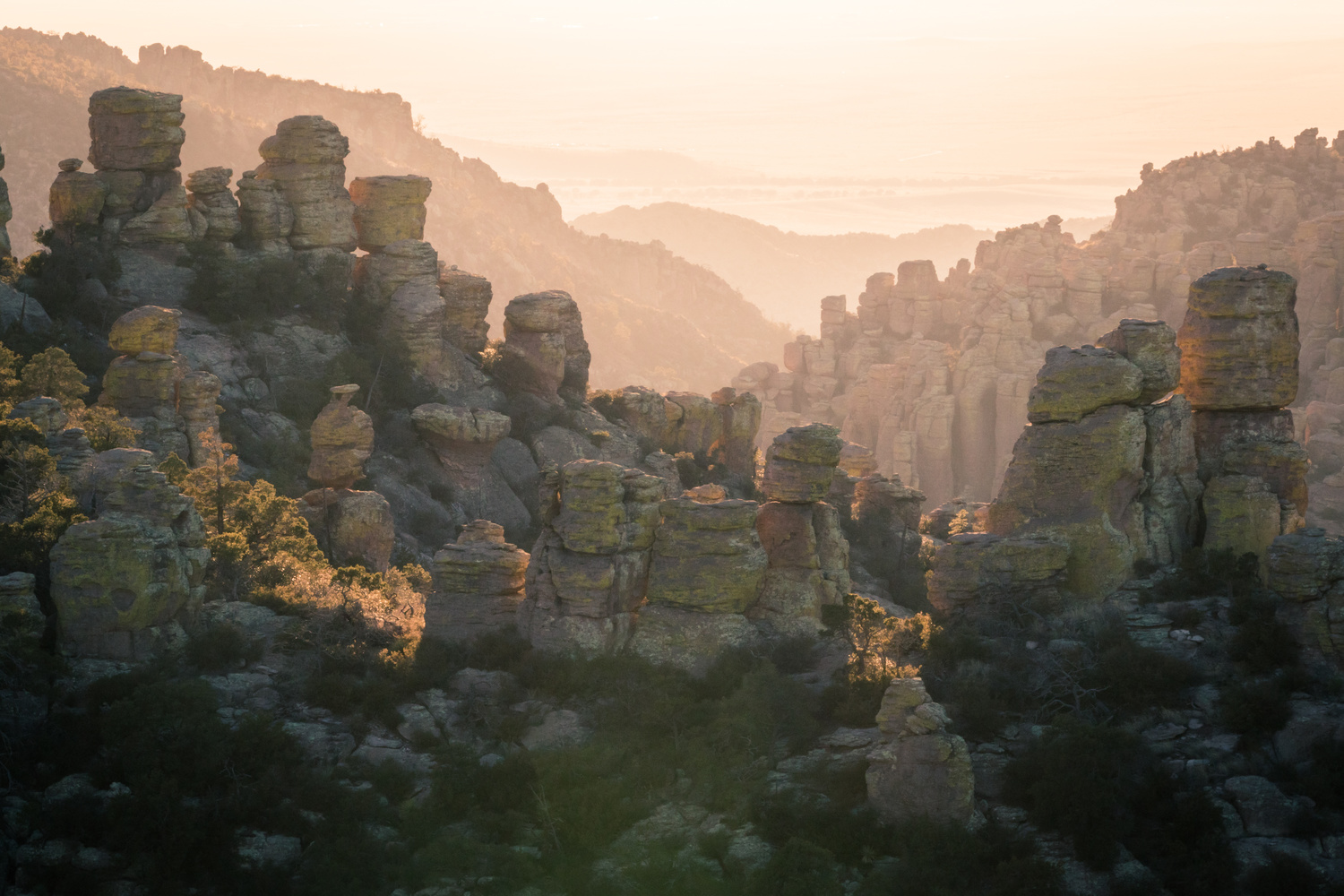 All it takes is some low-angled light to bring some dimension to the landscape. The spires at Chiricahua National Monument are best photographed early or late in the day. 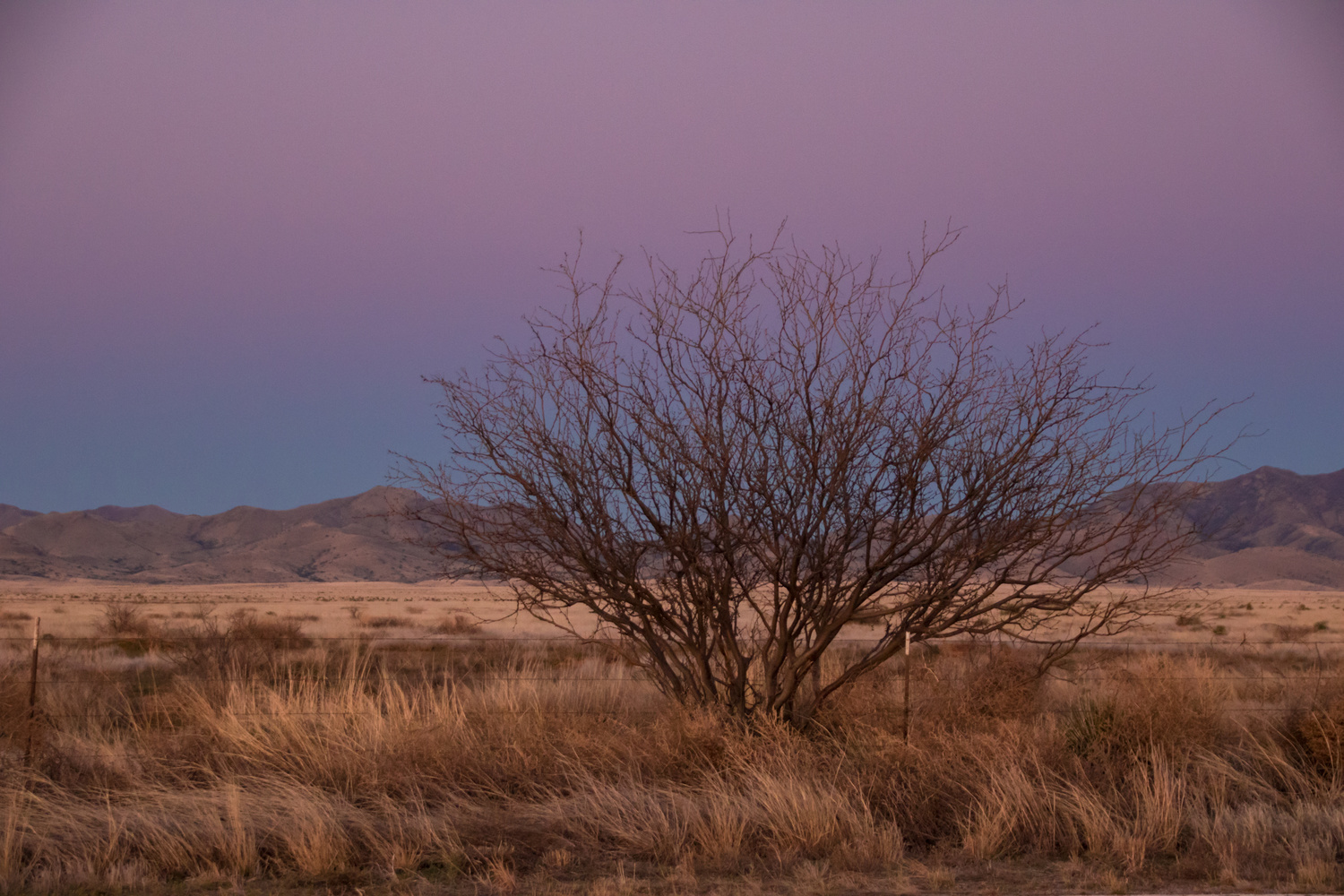 I must have pulled over four separate times on my drive home to photograph the blue hour light. Keep that camera handy even after sunset!

We inhabit an era in which we expect to plan and schedule our time down to the minute. We organize our days for maximum productivity and expect that the universe will give us some semblance of control. Well, the universe gives zero f***s about our plans. Fires will rage, cyclones will bomb, and flights will get canceled. Live each day with even the teeniest bit of openness and a sense of adventure and you’ll be able to see even the most inconvenient stranding as a photographic gift and a chance to enjoy.

nice work on making the most out of a bummer situation.

I shot photos for a book about Phoenix and found the state beautiful. (One of the days it was 117, but with the low humidity it only felt like 111.) Your photos have inspired me to go back sooner rather than later.