Let's face it, we all use our phones a little too often. The average person checks their device over 100 times a day. For this reason, I decided to use a fairly unknown hidden function on most smartphones to help curb my habits. Not only did it help tremendously, but it also brought some unexpected benefits to me as a photographer.

I think it's safe to say that I love having a smartphone. I had the first ever iPhone back in the day and have somehow justified in my head that having two phones on the go is really necessary. I even wrote an article about the apps I couldn't live without. Back in early July while researching for an article I stumbled across a post which talked about combating phone addiction by turning your screen to grayscale. It grabbed my attention and what it said made complete sense. According to former Google Design Ethicist Tristan Harris, smartphones are capable of hijacking our concentration in a way that is akin to a slot machine. When a user gets a notification on their phone, a chemical called dopamine is released into the region of the brain neuroscientists refer to as the reward and pleasure center. This feeling of satisfaction can get rather addictive and as a result people find themselves checking their phones more compulsively in the hope for another hit. Sound familiar?

Could something as small as switching my phone to grayscale really help me? For the whole month of July, I decided to run an experiment to see if I could get an answer to this question, the findings were pleasantly surprising.

How to Make the Switch to Grayscale

I like to think I know my way around a smartphone but had no idea that the screens could be so easily be made to only show shades of gray. Here's how to turn your phone to grayscale on both iOS and Android:

If your iPhone is on iOS 10, take the following steps:

Even if you're on the much older iOS 8 or 9 you should still be able to find this feature although the exact wording of the menus may be a little different.

Turning grayscale on an Android device may also vary due to the version of Android OS it has, if you’re on Android 7.1 Nougat, you can perform the following steps:

So with that done, you're all set to wave farewell to a color screen and reducing the dependency you have on your phone. There will still be times when you need to see the screen in color though. I find browsing eBay and looking at maps a whole lot easier if I briefly switch grayscale off. Both Apple and Google make this easy with an accessibility shortcut.

Once this is done a triple-click of the home button will toggle the grayscale mode on and off.

After Direct Access is turned on you should be able to set up a triple-click of the home button to toggle the grayscale mode on and off.

Obviously, there are many versions of both phone companies' operating systems that some of you may find you can't follow the instructions above exactly. The menu names and their locations tend to change between upgrades. If you get stuck leave a comment below with your OS details and collectively we'll try and help you out.

What to Expect After the Switch to Grayscale

The first few days of using a phone exclusively in grayscale can take a bit of getting used to. I initially found that I made many more typing errors, struggled to find the right emoji, and quite often opened up the wrong app. It's strange how much you actually rely on the color of something to identify it. After about a week or so my brain had adapted to the change and I was almost back up to speed. I always had the triple click of the home button to get me out of monochrome jail if need be but I didn't find myself using it all that often.

What you will quickly notice once you make the change is how all the things which were designed to constantly grab your attention now blend in. The bright red notification badges, all the bold hearts on Instagram, and those garish app icons have blissfully had their visual volume turned down to zero. The beauty is they are still there so you aren't actually missing out on anything, but they just become so much less significant. I lost the urge to clear notifications or give into my phones demands to open an app. This was in part because I was no longer getting my dopamine reward for doing so and I also learned that the world didn't end because I didn't instantly click on something.

After a few weeks of the experiment, I found that I was no longer using my phone as much, it just didn't have the same appeal it once did. I went from checking social media every hour to less than a few times a day. At this point I also switched off all non-essential sounds which were trying to vie for my attention, and this made the device even less alluring. What I did find interesting was when I occasionally switched my phone to color mode it now felt painfully saturated and I struggled to look at it for very long. It's crazy to think that just a few weeks earlier that was totally normal to me.

After four weeks of living with grayscale, I can emphatically say it has been a major success. What the experts had said would happen actually did; My phone is no longer hijacking my attention, I have more time in the day, and I am generally feeling more content as a result. Now if this was any other kind of website this is where the article would end, but as I am a photographer and this is a photography blog I actually found some additional by-products to the experiment which a lot of you may find interesting.

If you weren't already convinced to banish color from your device here are a few more reasons to make the switch.

We all have to follow and tolerate bad images from loved ones and work colleagues on social media. The strange thing I found was that when everything is switched to black and white it all starts to look a lot more artistic. I actually started to look at images I would normally scroll past in a heartbeat and see the true merits to them. Even though some were totally unintentional snapshots I found myself getting inspired. 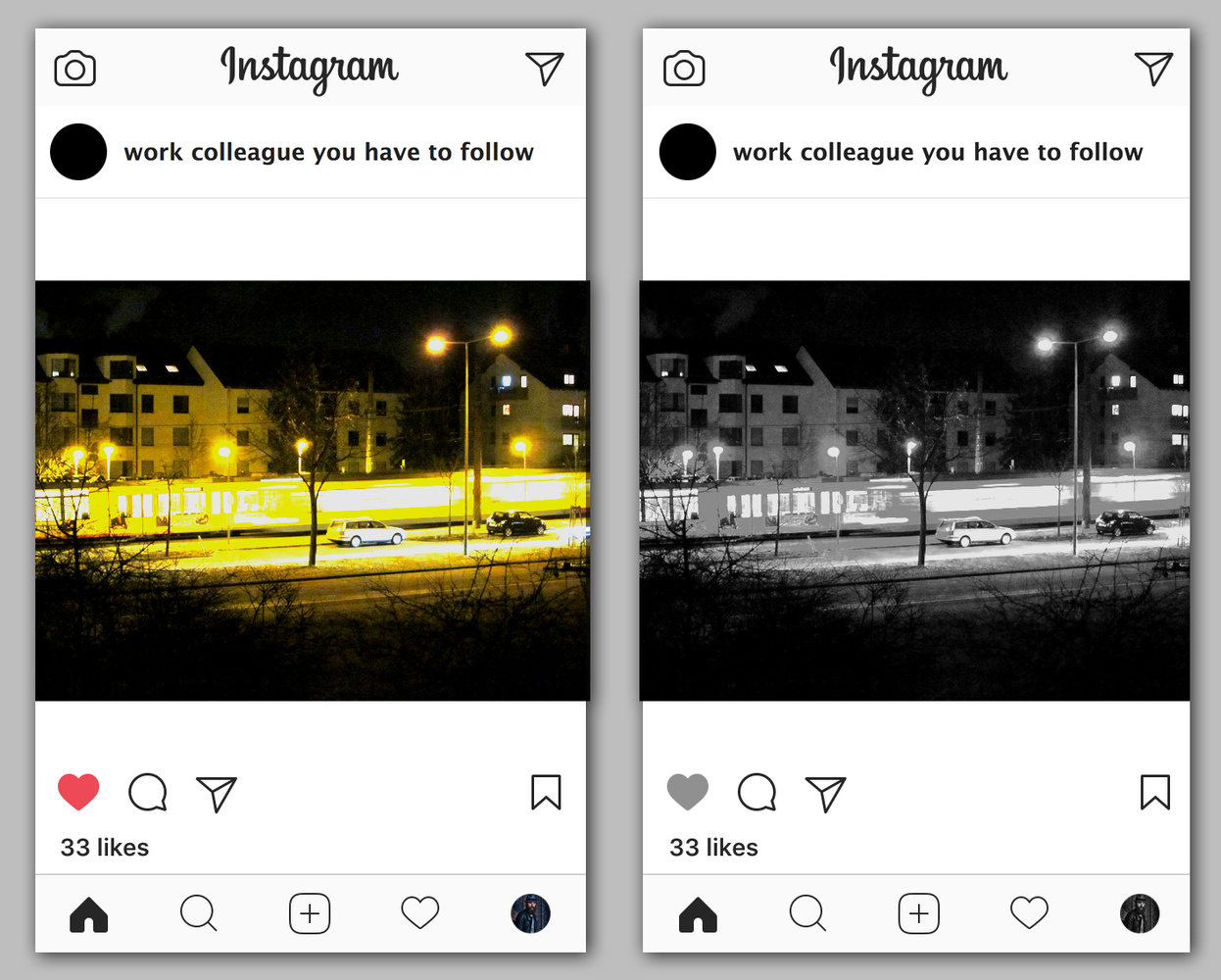 With the absence of color, there is one less distraction which means you'll be forced to look at the subject matter and the compositions used a lot more. Color is an important part of photography but it can get in the way when trying to decode an image. For this reason, I began seeing the strength of even the worst image and discovering golden ratios in the most unlikely of places. 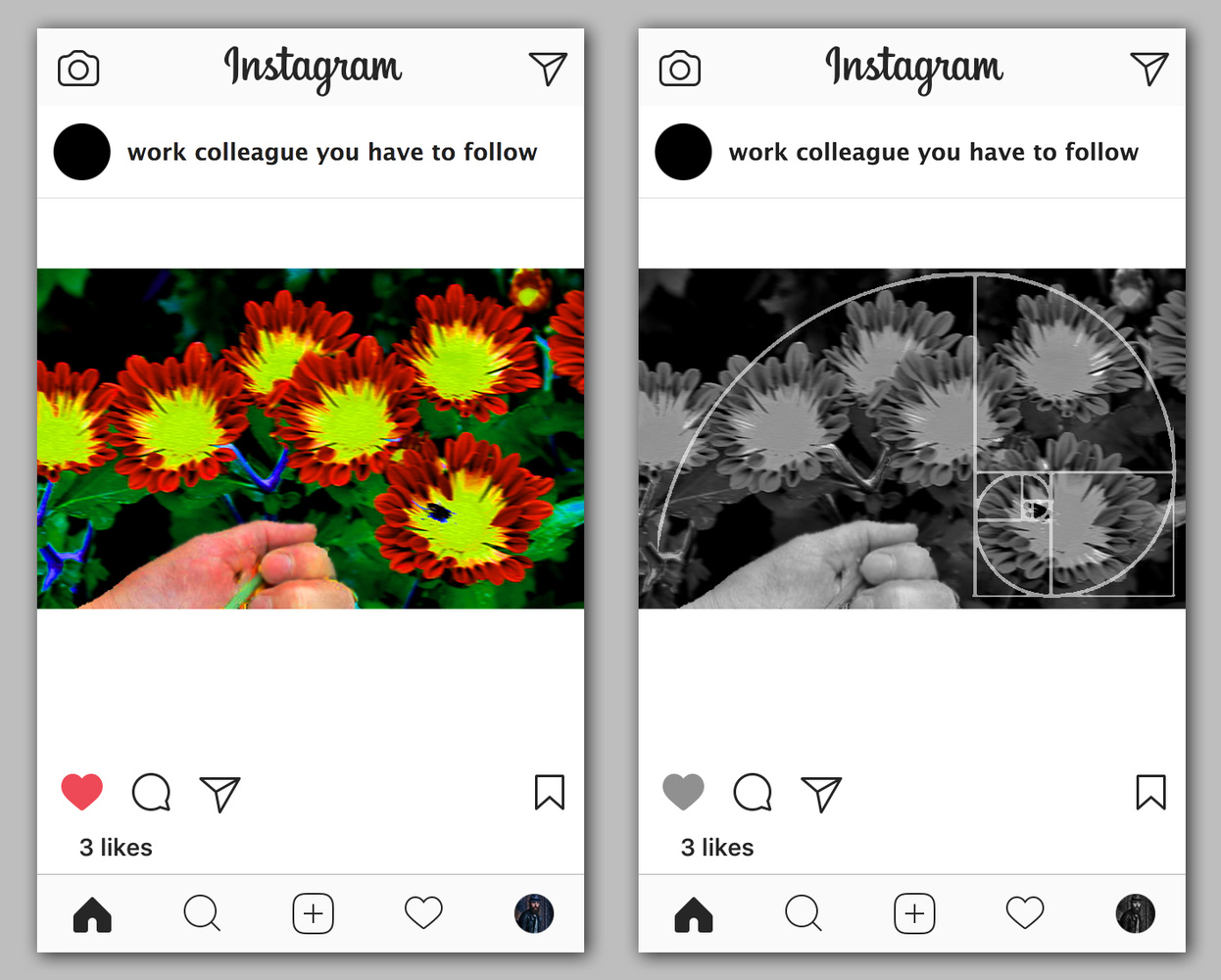 I have to admit that even though I'm hugely passionate about photography, I actually take very few photos on my phone. I think after 10 years of owning an iPhone the number of times I'd point the phone's lens at something to only be disappointed left me with negative associations of using it. It's very easy to get spoiled when shooting 50-megapixel images with far superior dynamic range on your regular camera. This attitude slowly started to change during my four-week experiment as I began reaching for my phone to take a shot more and more. I actually fell back in love with using the camera on my iPhone and although the pictures I took won't win any awards they really helped to open me up to new things photographically. 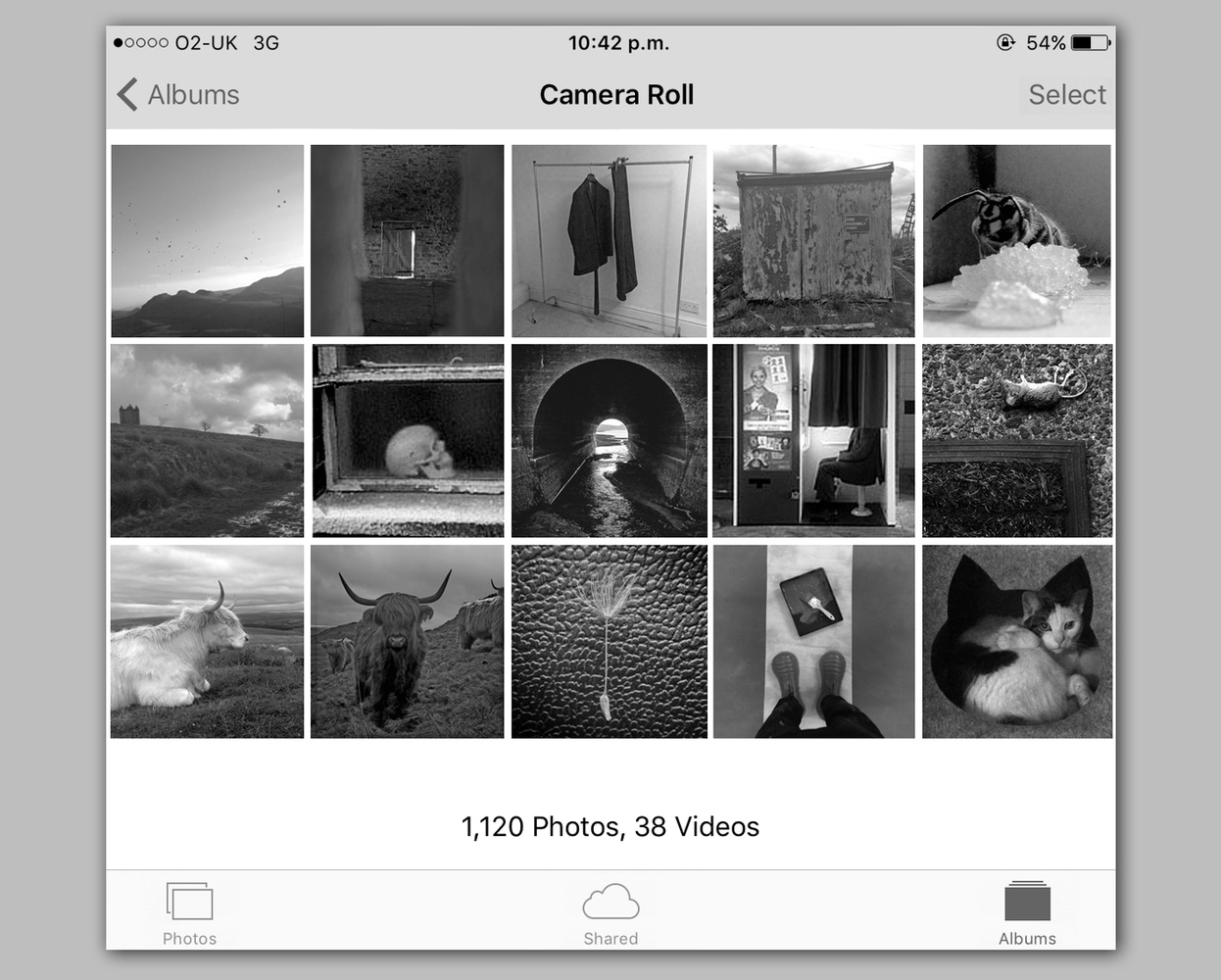 4. It May Change How You Feel About Monochrome

If you look at my work there is very little black and white photography in there. I used to prefer monochrome images early on in my career but more recently I would always look at an image of that kind and think it was missing color. Interestingly after the switch to grayscale, I found myself thinking this a lot less. I actually have some plans for a new series which will be in black and white which would have been unthinkable just a few weeks ago.

So there you have it, a whole host of reasons why switching your phone to grayscale might be a good idea. When I initially set out on this experiment the only real reason for doing so was to try and reduce the amount my phone was distracting me. Little did I know that it would turn into something much more than that. I guess sometimes it's good to see the world through someone else's eyes, even if they can only see shades of gray.

Does anyone else have their phone set to grayscale? Anyone tempted to try it out for a month? Leave a comment below I'd love to hear your thoughts.

Gear
Google's Pixel 3a: The Best Phone Camera for Photographers
Log in or register to post comments

I just switched mine, an interesting experiment :)

That's great to hear Oscar, let us know how you get on!