I stumbled across this lens in a consignment shop in Gloucester, Massachusetts last fall. I was aware of its existence but had never considered it as a lens for my needs, but the price was too good to pass up and if I didn't end up using it, it’d go into the ever-revolving, buy and sell, gear pile.It sat on the shelf for a month or two, sort of forgotten, but then an amazing pre-order opened at B&H and the soon-to-be released Fujifilm GFX 50R was ridiculously priced with a three lens bundle. I jumped on the deal and started to go through my gear and make some changes in anticipation of receiving the new camera. With the deal, I opted to sell off the 63mm and 32-64mm and keep the third lens, 45mm. Because I was going to keep this as a one lens kit with a specific lens in the GF line-up, I looked towards my shelf and saw the 28mm Nikkor sitting there and realized that it would be perfectly suited to the GFX 50R.

The PC lenses in Nikon's line-up of manual lenses were designed specifically for architectural photography. The PC stands for Perspective Control and allows the lens to be adjusted so there's less slant in lines of buildings or really any tall structure man-made or natural. Because it's designed to be shifted, the lens can cover a wider frame than the traditional 35mm full-frame image size. 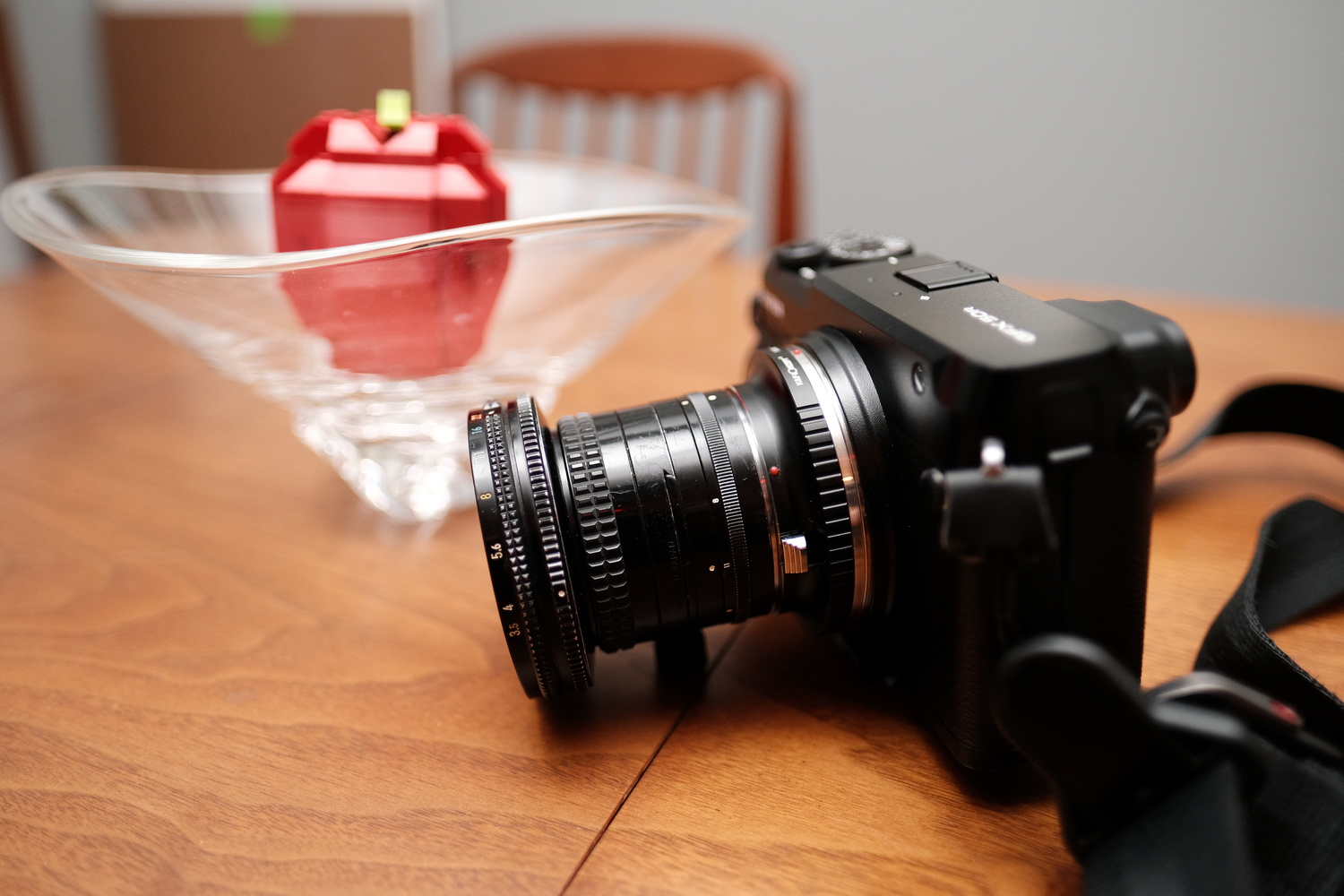 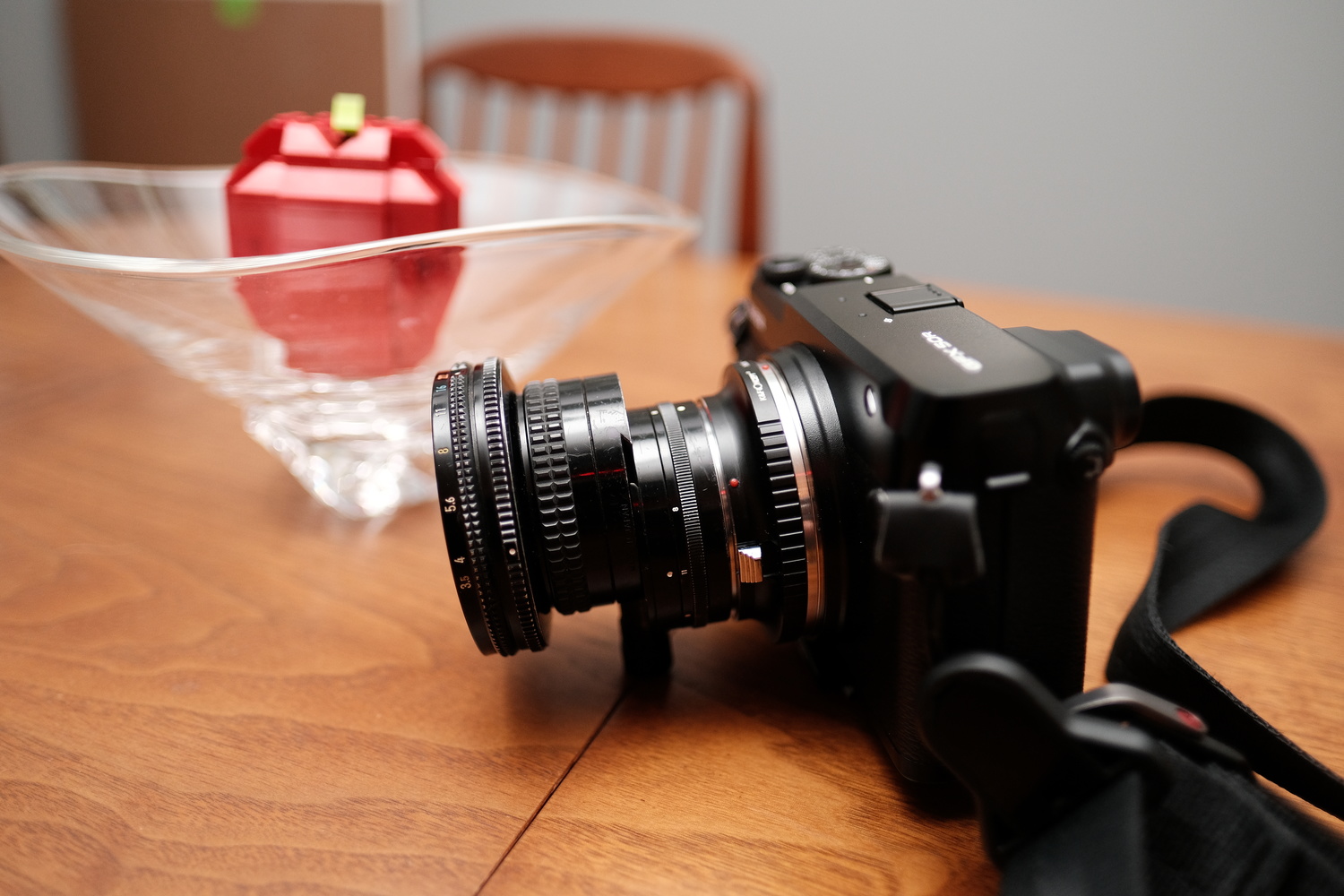 With the 28mm on the GFX sensor, it's an equivalent 22mm lens. This puts it at the higher end of ultra-wide lenses which suits it nicely for it's intended subject matter.

Last week, I was on a short road-trip from Portland, Oregon back down to Los Angeles and we meandered our way down through the redwoods and specifically the Avenue of the Giants. This road runs in between the 101 freeway and the Eel River. It's lined with copses and deep forests of amazingly tall redwood trees. The drive is picturesque and for this trip I had opted to bring just the 50R and the 45mm lens and the Nikkor 28mm PC.

I hadn't given much thought to what I'd actually be photographing as the trip was sort of spontaneous and the planned route was a very generic "South." After resting up for the night in Eureka, California we made our way through the stretch of redwoods along the main route and saw a sign indicating the Avenue of the Giants roadway as cool looking route so we veered off the 101 and upon entering and maybe going 500 feet, we saw a shoulder of the road that had fallen trees and various forest floor ferns and shrubbery.

In fact, it was basically Endor so our inner nerd was immediately piqued. We stopped and got out and I figured then was a good time to test the 28mm lens out. So, what follows is a few shots demonstrating the visual difference that the lens can offer. I'll preface it by saying that they aren't particularly compelling or well made but they do a decent job of showing what the lens can do. 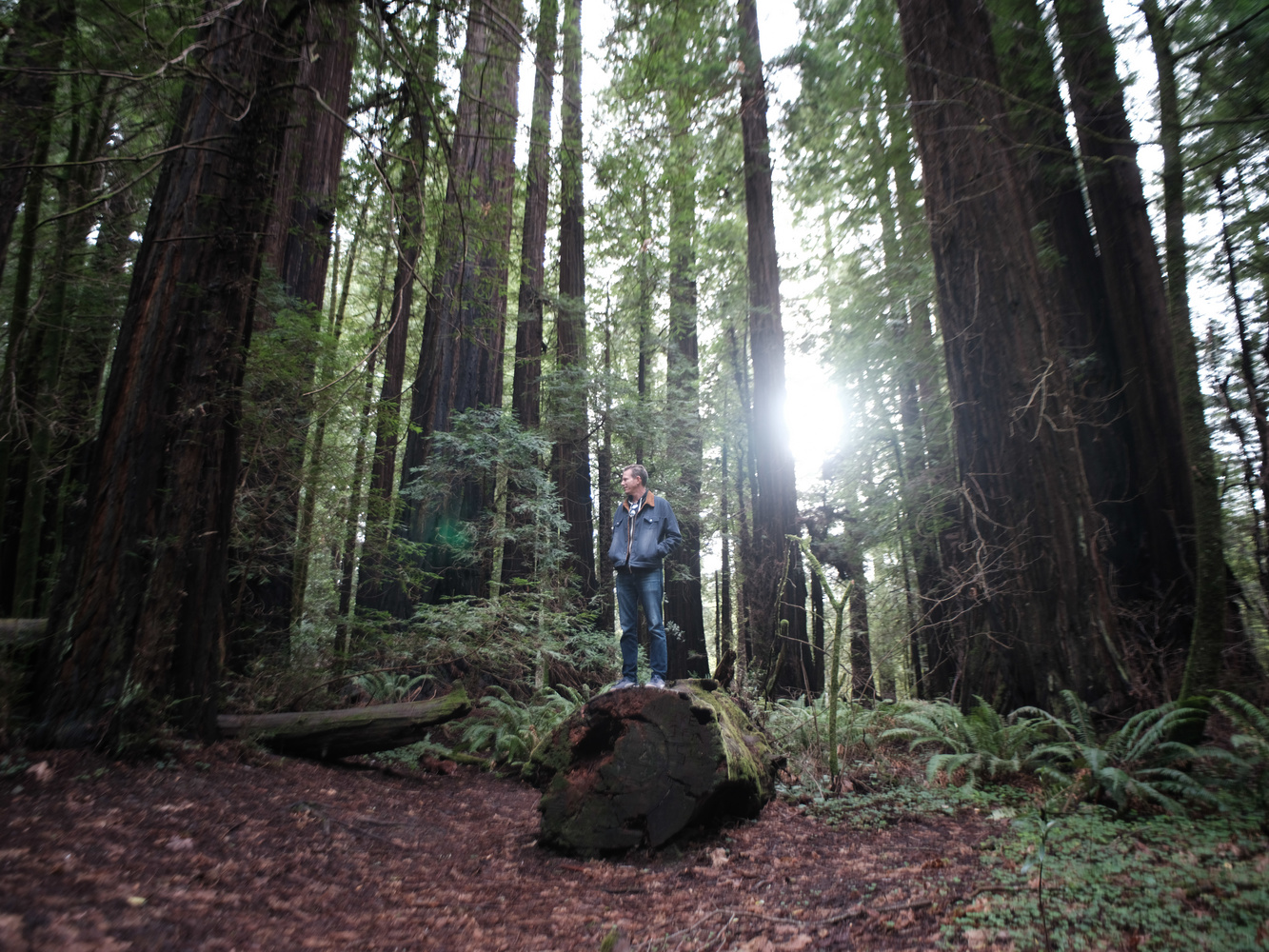 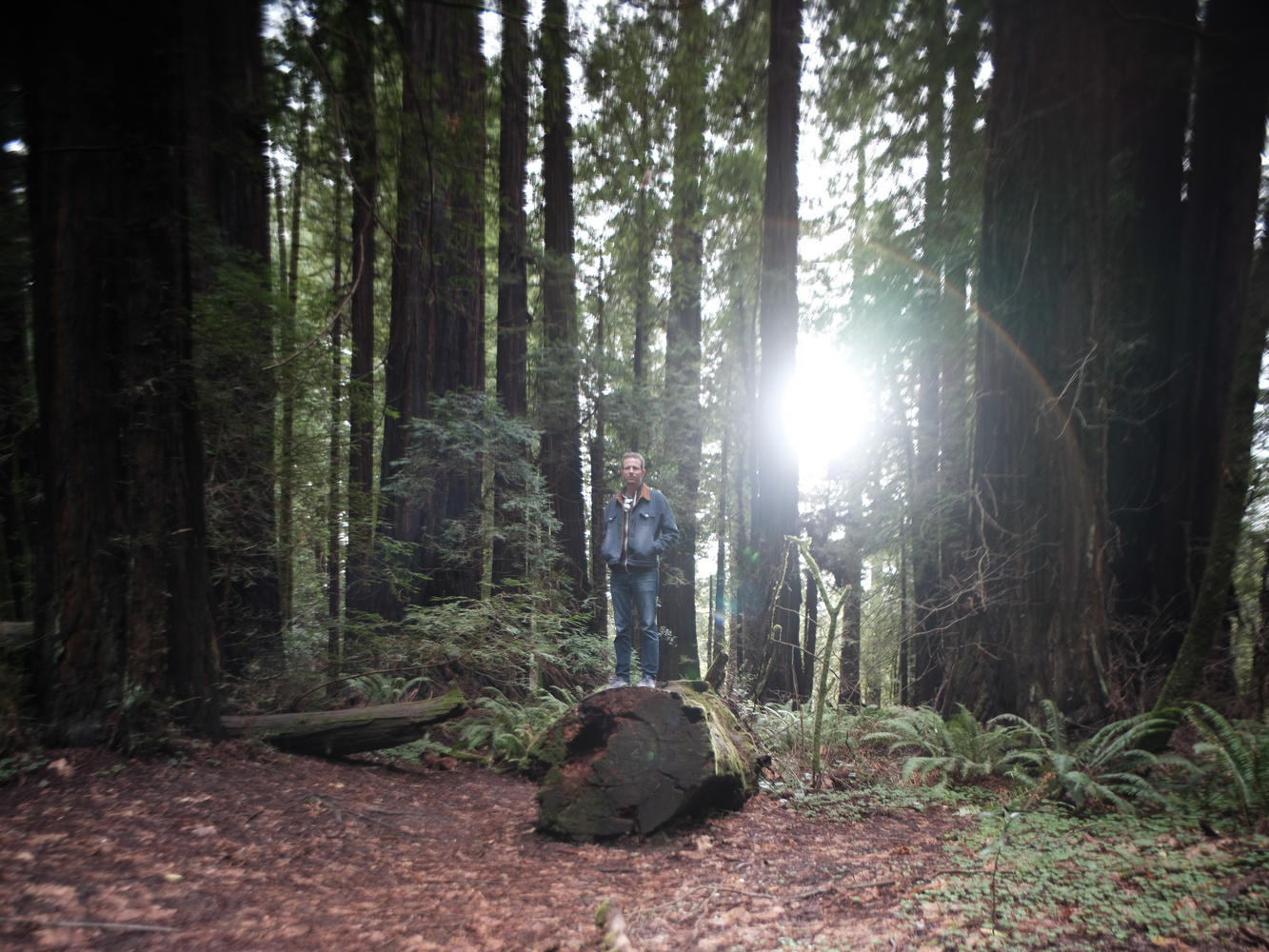 The extreme angle of the surrounding redwood trees gives a sense of scale and how imposing they are. But, keeping in mind that this lens' intended use is for buildings, it makes sense that straightening those parallel lines is more a necessity for that sort of photography. It's also worth mentioning that the image loses sharpness at the edges of the frame and distortion is visible though it is still present in the first image, just not as pronounced. This is probably more related to the sensor size of the GFX 50R than the lens but both can probably be attributed to the distortion as the 28mm PC Nikkor is known for it's poor performance in the corners.

Here's another set of images in the same area of the redwood trees: 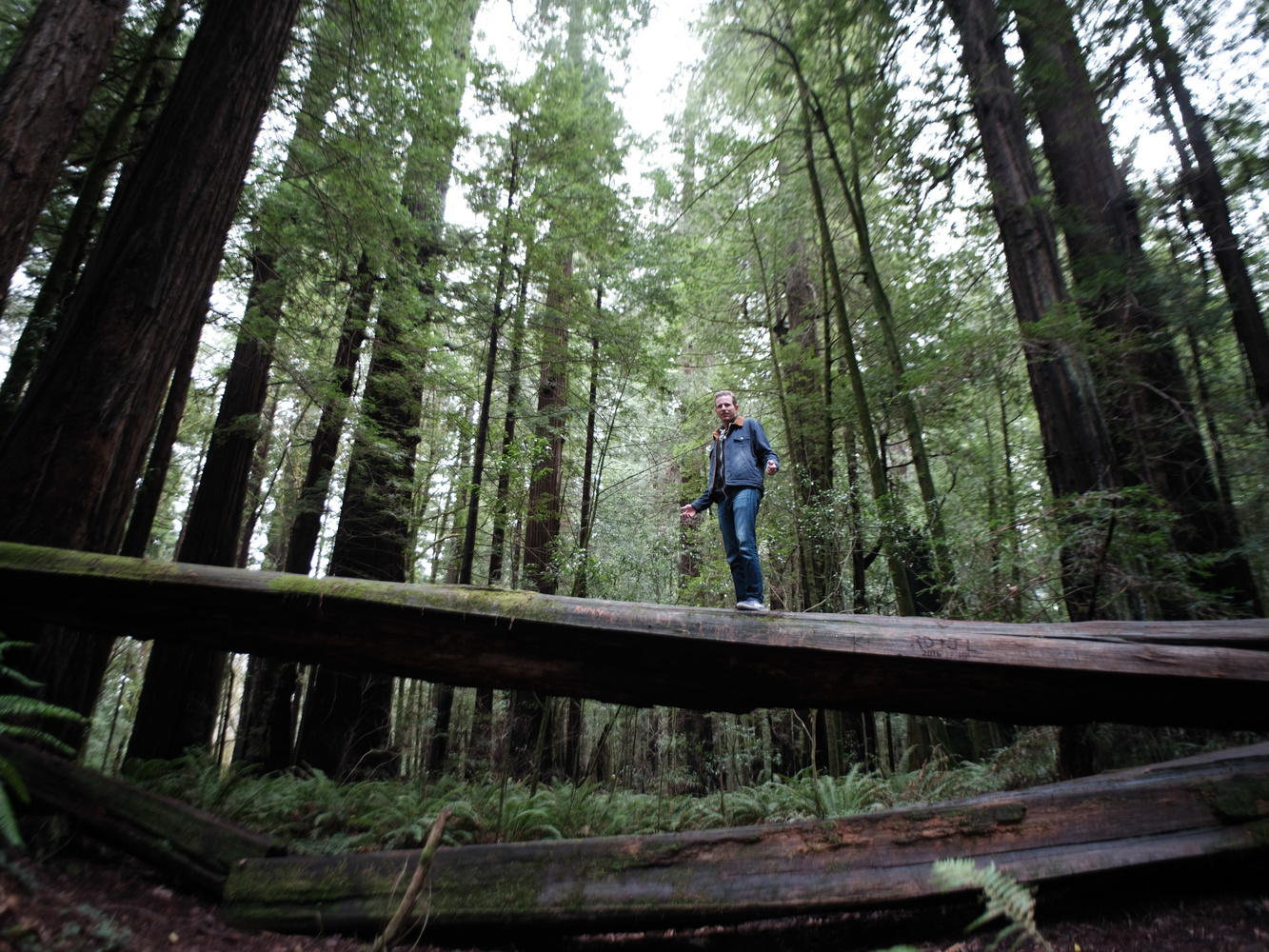 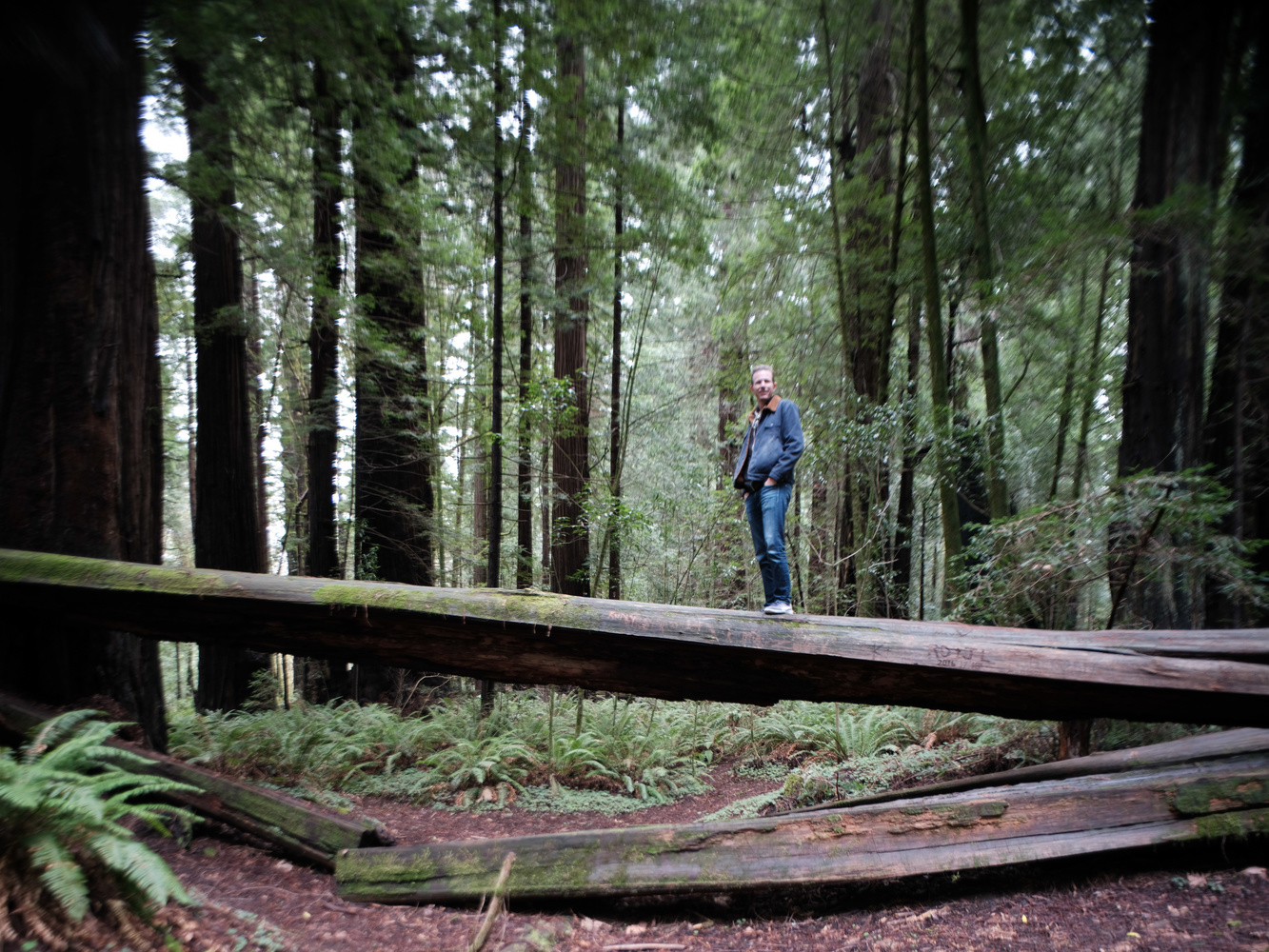 Once again, noticeable distortion but for this image, the composition seems better suited to the subject matter especially with the fallen tree log running across the frame. That's probably more my taste so your mileage may vary.

This lens is an interesting piece of kit as it provides a function that some may need in their arsenal. It's not so much for me though, but as an ultra wide angle lens, I'll keep it around for a bit. I have another one coming in the mail soon so I may run some similar shots to see how the distortion looks and compares to this one. Maybe something more clinical as these snapshots were done quick and dirty without a tripod.

I'm always on the lookout for lenses that I can use in my current line-up. That's been one of the major pulls towards the Fujifilm camera system which started with the XF line and is now carrying over into their medium format system. I'm looking forward to finding and using more vintage lenses for the GFX 50R as the 50R seems eager to carry on that tradition.

As an added bonus and part of the reason I opted to buy into the GFX series, here's an image taken with the GFX 45mm f/2.8 lens in the classic 65:24 ratio. In fact, part of my financing of this system was selling along my TX-2 (Xpan II) as I knew this image size was available to shoot on the GFX. I loved my TX-2 and some of my favorite images I've ever made came from that camera but it's electronic build that would inevitably fail and escalating price on the secondary market made me more comfortable to just sell it along.

Thanks for the question. It's a K&F Concept adapter. I think I just purchased the most affordable one.

Also interested in what type of lens adapter you used?