What Are the Worst Lies Photographers Tell Themselves?

Photographers are often a varied and diverse bunch, as there are so many different genres and attractions to the medium. But there are some lies we all tell ourselves from time to time. Which is the worst?

The first thing to note is this article isn't calling you out. This is a tongue-in-cheek piece about the lies we all tell ourselves, though it's certainly worth checking you aren't making any of these mistakes.

Truth be told, there are an almost endless number of lies we tell ourselves. One of the primary difficulties, I believe, is the line you must walk between professional and hobbyist. If you're a hobbyist, you aren't likely to turn down money for your art, and that can influence decisions even though it perhaps ought not to. Similarly, as a professional, I have to balance the acquisition of new gear between my love for photography and my business account! But money is just one area, and there are plenty of technical and philosophical lies we tell ourselves too. Here are some of what I consider to be the worst candidates.

I Need That New [Insert Piece of Gear]

This is a classic and likely the most prevalent. A new camera comes out, and it's difficult not to imagine what you could do with it, casting a scowl at your freshly outdated black box. Suddenly, you start to wonder just how brilliant a filmmaker you will be with 8K footage at your disposal, despite the only thing you have filmed in the last year being your cat as it dragged its rear on the rug, and that was using your phone. Or perhaps you announced decidedly to your partner that the new f/1.2 prime that has been launched will give you such desirable subject separation that clients or social media adulation will beat at your door like a biblical flood.

Camera bodies and lenses are far from the only offenders. The other peripherals depend largely on the 'tog, but I've seen many tell the same lies about camera bags, intervalometers, drones, lighting, tripods, and so on. You almost certainly don't need it. Speaking of tripods...

I Don't Need My Tripod

The number of times I've gone on a hike, outing, or day trip and decided I didn't need my tripod is unconscionable. It's a decision seldom made on likely application of the tool, but rather my unwillingness to carry just about anything in my hands, or the weight it adds to my backpack. I once trekked up a mountain to shoot the views from the top even though it was stormy — no, especially because it was stormy — with dreams of moody landscapes. I was right, the landscapes were moody, but so was I. I had to fashion a makeshift tripod out of my backpack and any other scaffolding I could erect around my camera to get proper exposure times or try creative techniques. Silly boy.

If you haven't said this, at least in your head and then regretted it later, are you even a photographer? It is the gold standard of lies and one you have to train yourself out of telling. In my early days, I said this at least once per shoot, whether landscape, portrait, or something in between. I would then have to spend unthinkable quantities of my precious time fixing what I could have done in a fraction of the temporal outlay on location. If you find yourself saying that you'll fix something in post, take 10 seconds to work out how long it will take to fix right there and then and how long it will take to fix in Photoshop, then make the decision as an informed one!

I Don't Need to Take My Camera Today

There's little unpacking necessary with this lie. You already know that if you stand in front of your camera bag before you go out for the day, debate its companionship, and then opt against picking it up, you're going to regret it. I believe I have told this story on Fstoppers once before some years back, so I'll summarize it instead. I used to take my camera with me wherever I went after received wisdom told me to do so. One morning, I had to be up tremendously early to get to university in the infamously bleak midwinter. It was still dark, it was freezing, and I was unhappy about having to drive for an hour for a 9 am seminar. When I saw my camera bag, I said a less polite "sod it" and left without it. Half an hour into my journey, I had to go through dense woodlands. The clouds cracked, and thick, orange light poured through a misty forest as it lightly snowed, sun dancing off the little flakes. Shafts of morning light stabbed through every tree as far as I could see, and to this day (this cautionary tale is from over 10 years ago) it was the most beautiful moment I've ever witnessed in the U.K., by miles.

I Don't Need to Learn Strobes; I Prefer Natural Light

This is one of those subjects that could take a lighthearted article miles off course in the comments. Nevertheless, we're going in. Natural light can be beautiful for portraits, events, interior, product, and every other kind of shot where some people light them with strobes. In fact, the images wouldn't necessarily be improved by strobes. However, not learning how to use flashes or studio strobes because you prefer natural light is a poor decision. There are many situations where strobes will vastly improve your work, but that matters not; just because you know how to use them, doesn't mean you have to. It's better to have the option there and choose to still work with only natural light than to deprive yourself of the choice. You do need to learn strobes; there's almost no reason not to. It's a lie many photographers tell themselves, and it's probably the most damaging.

What Do You Think the Worst Lie Is?

Humor / June 23, 2020
What Is the Worst Photography Advice You've Ever Been Given?

That it's okay to not register your images with the USCO

Or as I learned recently, you've got to include at least one image from every shoot. I have 47 images that a former Client used that weren't within our licensing agreement. I'm confident that I'll get paid but it will be far less than my IP Attorney initially thought.

That I am not my biggest obstacle.

I am creative, but stupid people do not realize that I am an artist.
I make less than minimum wage doing photography, but I still can call myself a professional photographer.

I don't need to bring my camera bag or accessories. Too often I go out with just a camera and one lens just to realize I could really use a different lens, tripod, or ND filters.

I'm nodding sagely about Number One, then get to Number Five and I'm thinking "ooh, strobes sound cool" ;-)

Without question the worst lie is that any of this matters.

That there's nothing wrong with cutting corners to save money. It's definitely frustrating to miss a shot because you bought the cheapest viable lens and it malfunctioned, or to realize that you lost hours of shooting time at a great location because you didn't want to spring for a hotel nearby.

I can blow by all other responses to this article, without a concern that I missed out on good pieces of advice.

But, I have to stop here in response to your post, to say a few words.

Missing out on the opportunity (of getting the shot), in my opinion, is the largest mistake a photographer can make. I do not care what gear a person has or experience one holds. It ALL means nothing if you are not there to take the shot. "Being there IS ALL THAT MATTERS," and of course, what you do once you are "on location" as they say.

I have one of the coolest cameras on the planet (D850)... So what! With the exception of two lenses, I purchased all Nikon primes. Who cares. I have a wicked carbon fiber tripod. Big whoop.

It all means nothing if I'm not there (with a camera)...

2109. September 11th, 7:30 PM in the northern suburbs of Chicago. I had been suddenly woken up by my phone ringing and blaring tornado sirens. My camera was in my bag in the closet. I looked out the window, and aside from the sirens, a half sunlit sky, the tower of clouds in front of me looked somewhat threatening, but apparently the weather service knew better. we were warned.

I ran back to my bag, grabbed the camera, did not even bother with the tripod or cable release. I walked out on the balcony, set my shutter for bulb, planted the camera firmly on the balcony ledge, hit the actuator for 1.8 seconds, and BOOM! see image.

Had I not grabbed it, would not have captured a picture which came in first place in a contest. I am not a pro by any stretch. Just knew enough to pull out the equipment. 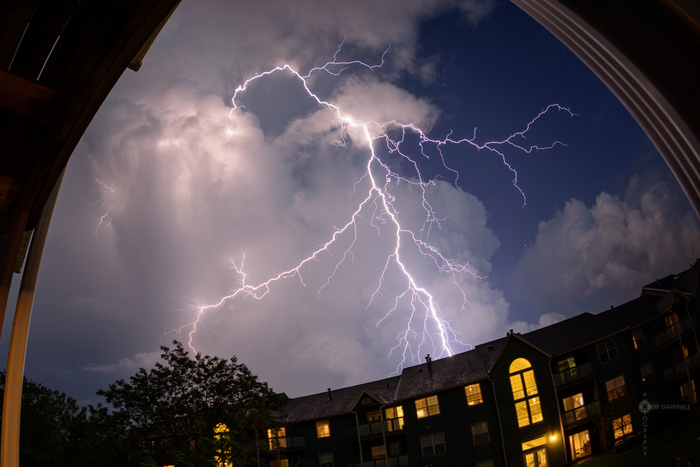 With respect, I think this qualifies - the lie is that amateurs HAVE to get the shot. It is great when we do, but no biggie if we don't. That is what separates us from the pros - who have to get the shot to stay in business. And, for me, that lack of pressure keeps photography fun.

BTW - great shot above and congrats on winning the contest!

Ah, yes. So true that all I can do now is laugh about it because there are usually no do overs. There are some great "lies" ahead of me, but I'll add two more.

Film camera lie: I won't load a new roll because I don't know what I'll want to make a picture of. Followed by, I won't bring my camera with me because it's empty. (Kind of like your anecdote.)

Digital camera lie: That macro lens with AF and OIS is so big and heavy (Fuji XF 80mm/2.8 OIS WR MACRO). I don't want to lug it around in my bag all day. The corollary is thinking it's not going to rain so why bring the larger and heavier WR lens.

Needless to say, I regretted those choices.

That Beyond meat is just as good as beef.

Telling a client that their white collar and shirt should be the same tone as the print border.

All that extra grain or noise was required to bring out the best of details in their faces.

No, I am not going blind, it must be all my manual lenses are focusing improperly.

The 19th century Norwegian playwright Ibsen wrote that everyone has what he called a “life lie”, something both firmly believed and at the same time known to be false. After all, we humans are perfectly capable of simultaneously holding two contradictory opinions/beliefs. We photographers are only human.

The biggest lie: Photography is art

I am good and fit to write photography related articles? lol But I am with Tyler Durden here...

good mic I will edit it with this: https://dlandroid.com/inshot-video-editor-apk/